In a Controversial Campaign, Police in Indore Go After Criminals and Also Their Families

Over 100 houses have been demolished under the Gunda Dhar-pakad Abhiyaan to 'control crime' in the city. 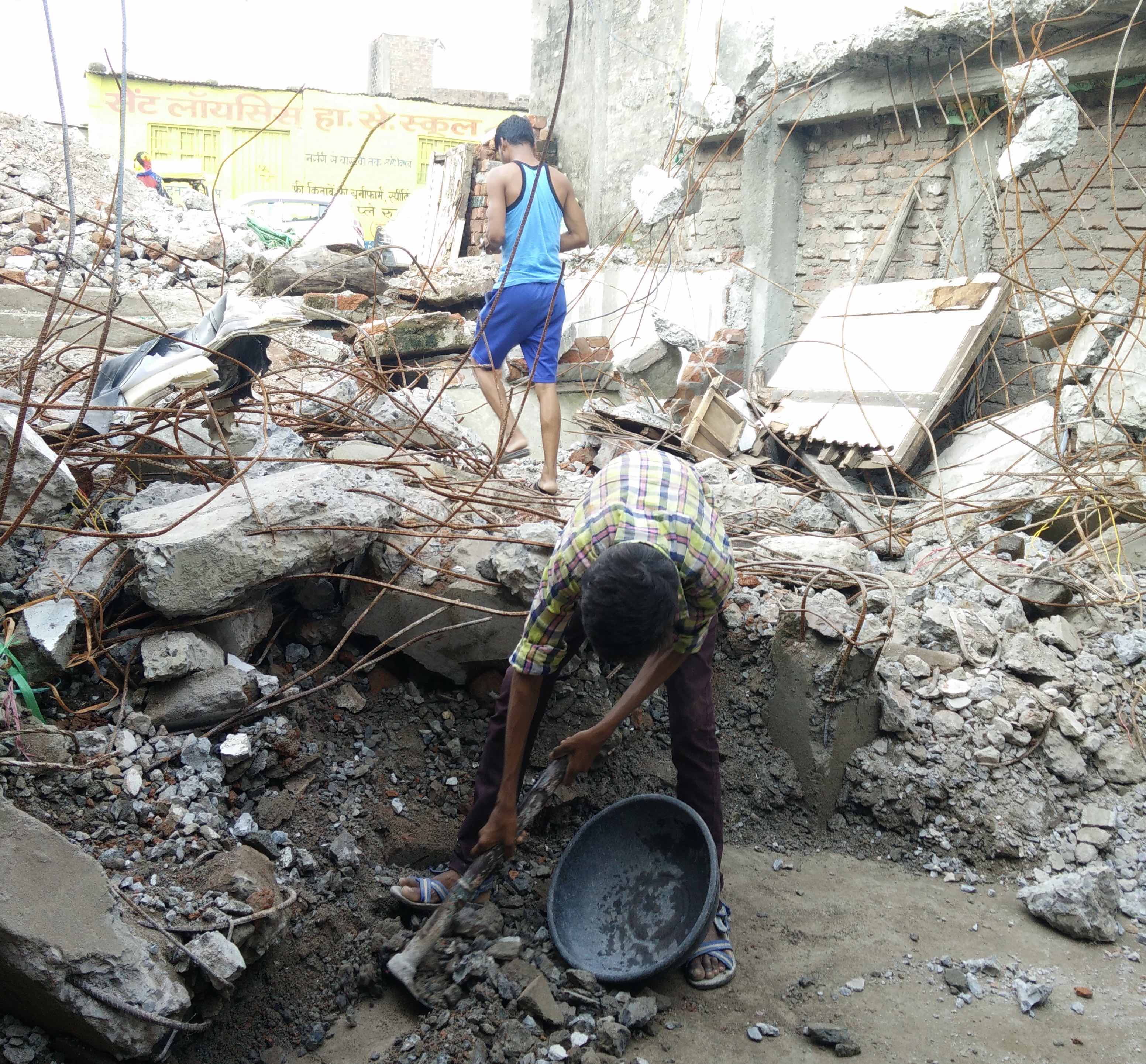 Workers clearing debris at Sultanabi Shaikh’s house which was demolished in the drive. Credit: Sukanya Shantha

Indore: In August 2016, the Indore police arrested twenty-seven-year-old Bawar Shaikh on charges of selling country liquor in the city without a license. After spending nearly a year in Indore central jail, he was acquitted and finally released on July 27, 2017.

But two days before his release, the Indore Municipal Corporation demolished his mother Sultanabi’s two-storey house in Kajarana region of the city. Shaikh’s family house had become a target of Indore’s much touted Gunda Dhar-pakad Abhiyaan (campaign to nab criminals) – an initiative started by the deputy inspector general (DIG) Harinarayan Chari Mishra in collaboration with the civic body to ‘control’ alleged hoodlums in the city by going after their families.

Though Sultanabi was the owner of the house, the notice was issued on her son Bawar’s name, asking the family to vacate the house. “The house belongs to me and not my son. But the notice had his (Bawar’s) name on it. I refused to accept it. And even before we could have moved the court, our house was demolished on July 25,” said 60-year-old Sultanabi, a cancer survivor, who, with her five family members, is now living in the kitchen area which was spared in the demolition. 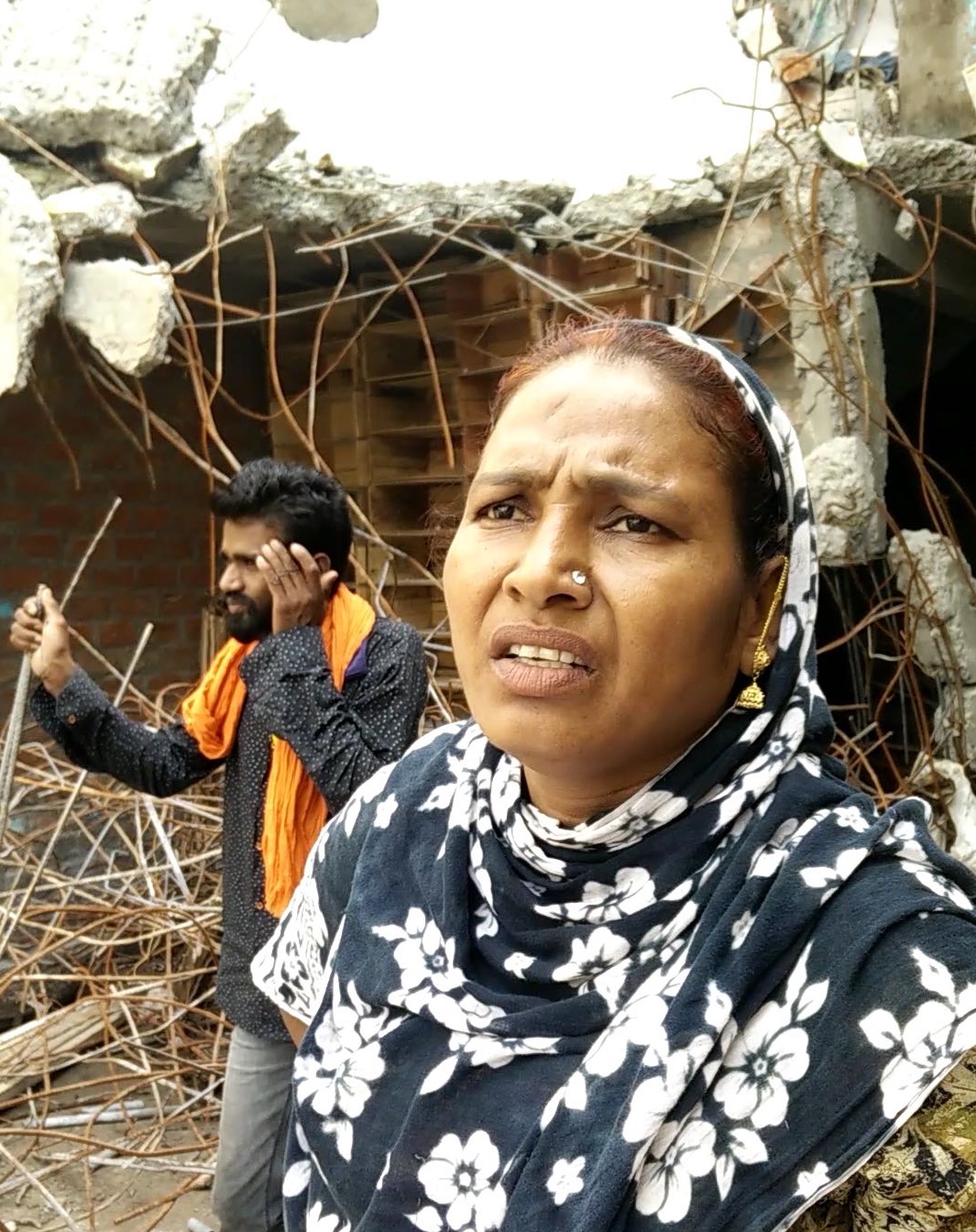 Sultanabi claims her house was built well within the civic rules with all the legal documents to establish her ownership over the house. The notice served to her, however, pointed at some “dangerous construction” work that was allegedly carried out in the front part of the structure. “If that was the case, why wasn’t only the illegal part demolished? Why did they destroy our shelter completely?”

DIG Mishra is clear why the action was taken – according to him, the very objective of his innovative ‘initiative’ is to nip the problem in the bud. “It does not matter who owns the house. If these repeat offenders live here and operate from these spaces, we have to find ways to stop it. Now the families know clearly what happens if they support a criminal.” The Indore police have so far demolished 100 houses across the city and have scheduled 50 more for this month.

The idea first occurred to Mishra when his office was tabulating the names of those accused of multiple crimes. “Every area has such notorious person, who would be involved in crimes like chain snatching, theft, selling spurious liquor – any kind of public nuisance. These people make the city unsafe. We have been focusing on patrolling these crime-prone areas and having these men promptly arrested. But as soon as they are released, they return to the same crime again.”

Such individuals were profiled, their properties were listed and their dependent family members identified, Mishra says. “We also found these houses had irregularities and many had encroached too.” Once the list was finalised, the police approached the civic authorities to discuss the measures that could be taken. “Our list was of over 300 names, we brought it down to 150 where clear action could be initiated,” Mishra explained. This initiative is spread across Indore – from a relatively poor locality Khajrana to the city’s upmarket Saket and Gulmohar colony. “We have not spared anyone,” he added.

Mishra claimed only “fancy, large” houses with glaring irregularities were targeted. “These men commit crimes and then build these fancy houses. They encroach over private and government land and their families enjoy luxuries earned through illegal means.”

But 60-year-old Sarvari Lala’s house was anything but luxurious. A small dingy 10×25 feet room was her home for over three decades. She, her two sons and their families lived here until the house was demolished on August 2. This demolition, she claims, was carried out because of her youngest son Toufiq (23) with whom she had severed ties several years ago. “He stepped out of the house in 2009 when he was first arrested in a theft case. Since then, he has been on his own,” she said. Lala blames her son for her family’s condition. “He never cared for the family and now because of him, we have lost everything.” Toufiq was booked in around 12 cases of theft and trespassing on private property. He has already been acquitted in five cases while others are pending before the magistrate’s court. “How could the police target an entire family? Where will we go now?,” Lala asked. With the debris still not cleared, the family has found shelter under tarpaulin sheets.

Observers say these demolitions are a high-profile and dramatic exercise. “The police have been treating these demolitions as a big public event. Each time a demolition was to be carried out in our vicinity, over 150-200 police men would cordon off the entire area. We are not told what is exactly happening here. It almost felt like they were here to hunt for a terrorist,” recalled Feroz Ghethwas, one of the residents of Khajhrana area, a neighbourhood with a largely Muslim population. Most men here work as labourers, and women and children here are engaged in making tiny decorative electric light garlands.

According to the National Crime Record Bureau – a repository of all crime data in the country – Indore accounts to 2.7% of the total crime committed across India. Among India’s 53 ‘megacities’, 18,463 cases were registered in 2015. In comparison with Delhi (25.7%), Mumbai (6.4%) and Bengaluru (5.3%), Indore comes way down the list. Mishra says the menace was becoming too much to handle. He claims his initiative has got positive response from local citizens and praise from chief minister Shivraj Singh Chouhan. 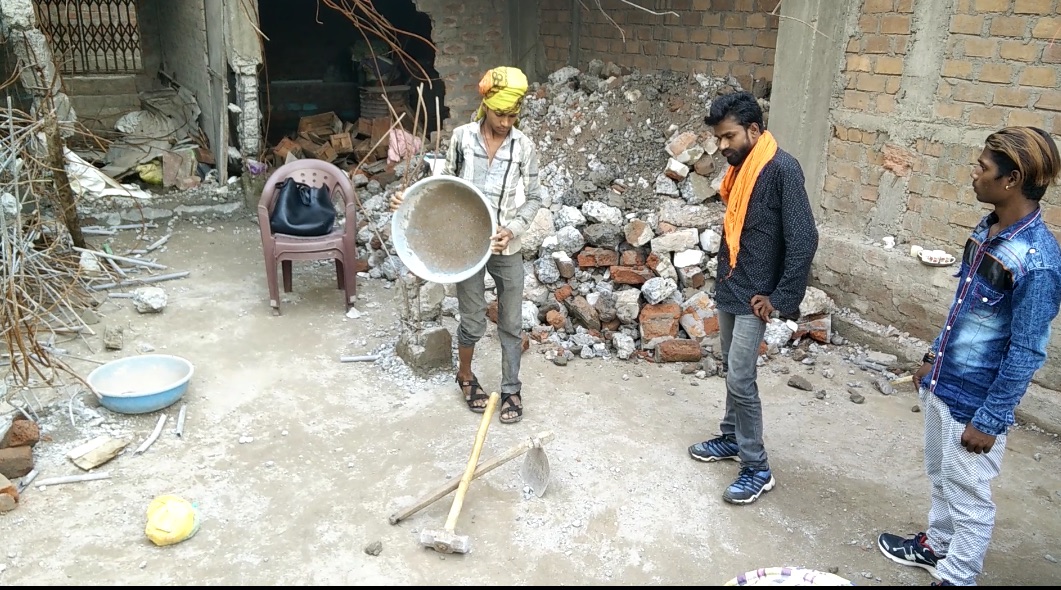 Workers clearing debris at from Sultanabi Shaikh’s house which was demolished in the drive. Credit: Sukanya Shantha

Senior counsel Mihir Desai calls this process of profiling and targeting the families as unconstitutional and a clear case of violation of human rights. “The Supreme Court judgments have stated that only ‘imprisonment’ can be a punishment, and anything more than that is illegal. And here, the police is going after the entire families and punishing them. If the police’s logic is extended to their own department, the entire police force should be suspended every time an officer is caught in corruption charges.”

Advocate Shanno Khan, who works with the Human Rights Lawyers Network in Indore, has moved the Madhya Pradesh court against these demolitions. “When one person commits a crime, the state is expected to follow the due process of law. The Indore police has criminalised the entire family and punished them for a crime allegedly committed by one person,” Khan said. Khan moved the petition, after she was approached by a 70-year-old widow whose house was demolished over an alleged crime committed by her nephew. “Why should I pay for my nephew’s misdoings,” she asked. The petitioner did not wish to be named since she lives alone and fears further retaliation from the police if she spoke to the media. “Instead of building evidence and proving the cases in the court, the police have found a short cut. Multiple cases mean nothing unless they have been proved in the court of law. And the fact remains that often these men are acquitted by the court,” Khan said.

Indore, like any other tier two city has expanded exponentially over the past decade. Migration of poor, homeless people in distress from faraway rural areas to any upcoming urban and sub-urban hubs is not a new phenomenon. Most migrants and the city’s poor live on government land or any other open spaces available to them. “But these houses are usually regularised or alternative housing is provided to them by the corporation under the state or central schemes,” explained Indore’s mayor Malini Gaur.

“Then why did the corporation not think of regularising these houses (demolished under the police initiative) too,” Khan asks. Anand Lakhan, an activist working with the vulnerable groups in the city for over two decades feels connecting encroachment or any structural irregularities with crime causes grave societal and personal deprivation for families. “These demolitions not just take away their shelter, but also make them more vulnerable in the community. When someone is booked in a criminal case or arrested, his entire family gets ostracised. And here, the police have humiliated the entire family by forcing them to take shelter under tarpaulin sheets.”

Lakhan’s concerns have already proved true in case of Roshanara Shaikh. The marriage plans of her daughter were cancelled as soon as their house in the slums of Patel Nagar was demolished on August 17. “The groom’s family did not want to associate with us anymore. As soon as they got to know of the demolition, they called me and called the whole thing off,” Roshanara said. Her husband Wahid, who has several cases of theft and chain-snatching against him, is currently in Ajmer after the local magistrate court passed an externment order against him early this year. “He cannot enter Indore for another six months. My daughter’s marriage has been cancelled and the house broken. We are living in the open. Will the government take the responsibility if something untoward happens to my teenage daughters?”

Sukanya Shantha is a freelance journalist in Mumbai.