With All Its Flaws, Gogoi Judgment on Ayodhya Could Aid National Reconciliation

But the court needs to ensure the proposed 'Trust' is not packed with BJP or RSS or VHP trishul-carriers and that the Trustees do not become agents of political triumphalism. 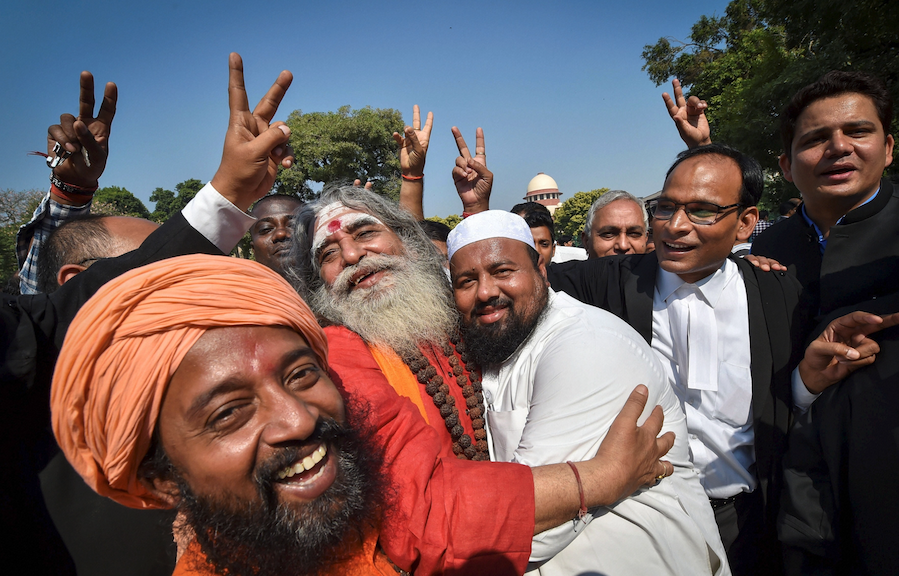 The Ram Janambhoomi-Babri Masjid case was and remains essentially a political dispute but the apex court got involved in adjudicating it because that is the only way a civilised society and a constitutional democracy could settle such a quarrel.

The court has given, primarily, a practical judgment. But the simple yet profound question cannot remain unasked: have the Chief Justice of India and his four colleagues produced a just verdict?

The Gogoi judgment is not without its flaws. It is certainly not an example of impressive, leave alone wise, judicial statesmanship but it is a practical pronouncement.

Reason is obvious and all too evident. Even if the court had awarded an outright ‘victory’ to the Muslim side, neither could the mosque have been re-built nor any namaz offered at the site. That would have been an invitation to an unmitigated disaster. Except for a loony fringe, neither Muslims nor Hindus have the appetite for a prolonged bloody civil strife.

Yet the Muslim community was and remains entitled to want to be reassured that the guarantees about religious rights and freedom, so gloriously and so proudly promised in our constitution, had not been totally abandoned.

Even more, the Muslim community, as the largest minority in the country, has to experience fairness in the Indian democratic institutions and arrangements.

On both these counts, the minority community need not be totally disappointed with the Gogoi judgment.

For one, the court has settled the title suit in favour of Hindus, for whatever it is worth; and, on another count, it has ordered that land will be allotted for the Muslims to build their mosque, thereby enabling the Indian state to honour the solemn commitment it made to the international community in the wake of the December 6, 1992 mob vandalism. The Gogoi judgment has not totally disgraced the republic, and perhaps the higher judiciary has redeemed itself somewhat. The court has not opened the doors for a Hindu raj.

From the Hindutva point of view, the judgment can only be a basket  full of curate’s eggs. At the core of the whole “Ram Janmabhoomi” campaign was an atavistic assertion that this land belongs to the Hindus, and that the majority has a right to dictate the manner and the terms on which the minorities will live and prosper in the republic. This assertion has been the crux of the Hindu communal camp’s disavowal of the principles of a secular state enshrined in the Constitution of India.

Now, to be sure, there will be a Hindu temple and mandir vahin benega. But we do need to recall the early 1990s when L.K. Advani and his cohorts used to go around the country declaiming that the “Ayodhya” was a matter of faith for the Hindus and only a dharma sansad – not the courts, not the sovereign parliament – could lay down the law. It has taken a  three-decade fight to roll back the claims made in the name of the sadhus and sants. 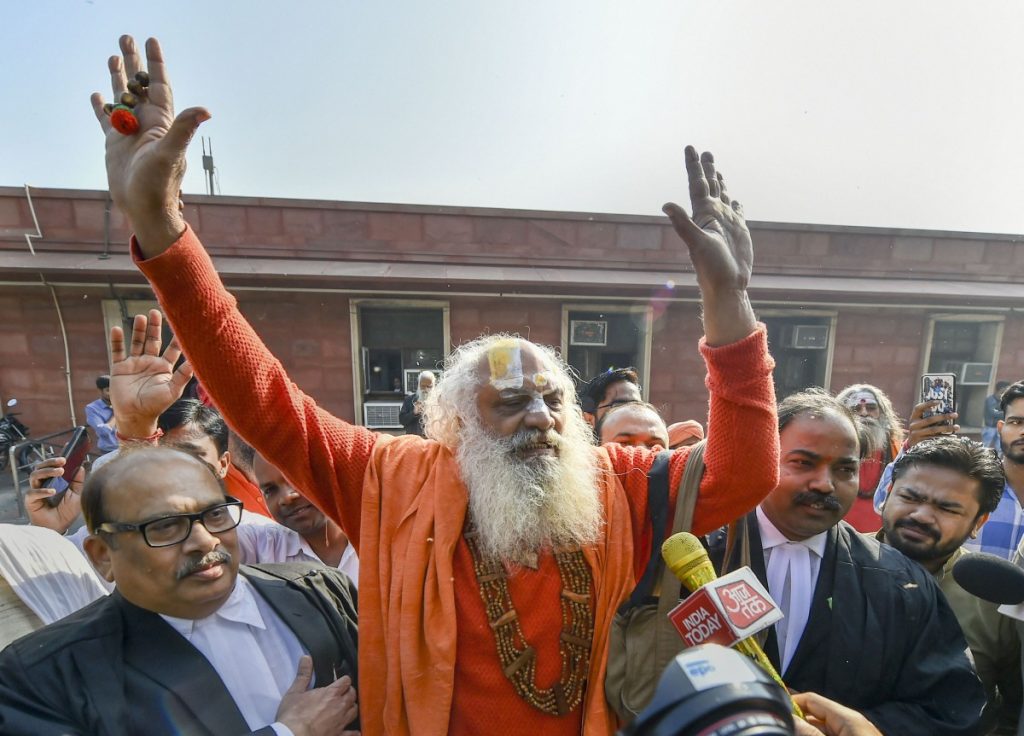 Mahant Dharam Das of the Nirmohi Akhara talks to the media as he arrives at the Supreme Court for the Ayodhya case verdict in New Delhi, November 9, 2019. Photo: PTI/Arun Sharma

And to the extent the Gogoi bench has chosen to categorise the December 6, 1992 vandalism as unlawful, the law should now go, with its full force, after Advani and others still facing criminal conspiracy charges in the Babri Masjid demolition case.

The calculus of defiance of law on December 6, 1992 has to be rolled back. The lumpens have not been given any carte blanche to go on any kind of a rampage to rectify ‘historic grievances.’

Even though the BJP and its allied organisations may have been given a reason to celebrate a ‘victory’, the November 9 judgment stops short of legitimising the Hindutva assault on the secular India. There is nothing in the judgment that can be construed as a dilution of the constitutional guarantees at the core of a democratic, plural, and secular polity.

If it was the intention and inclination of Chief Justice of India Ranjan Gogoi and his fellow judges to help the Indian political community dissolve one if its long-standing disputes, the court still has a lot of unfinished business on its hands.

To begin with, it will need to intervene and clarify that the proposed “Trust” must not be packed with the BJP or RSS or VHP trishul-carriers. In particular, the apex court will need to see to it that the “Trust” and its Trustees do not become agents of political triumphalism.

To the extent the dispute over Babri mosque had become a symbol of our secular credentials, the Gogoi court could not have been unmindful of the political consequences of its pronouncement for our constitutional republic.

Having opted for a practical way out of a conundrum, the judiciary will now need to nudge the political leadership to produce a grand reconciliation. For a start, the judiciary must summon inspiration to ensure that the Ayodhya verdict does not get converted by Hindutva hotheads into a licence to “re-open” the other so-called ‘disputed sites.’

For nearly three decades, the ‘mandir crowd’ has succeeded in injecting a  sense of ‘injustice’ in the collective mind of the Hindu majority. This manufactured  grievance has been exploited by the BJP and the rest of the sangh parivar to introduce venomous disagreements and disagreeable divisions.

Now, sooner than later, a Ram Mandir will come up in Ayodhya and that perception should stand dissolved. The Gogoi judgment would be worth its flaws only if it helps the politicians to begin the process of national reconciliation and heal this divided land.