"...farmers are rightly convinced that their voices are being shunned down and only one-sided narrative of the government is being pushed forward." 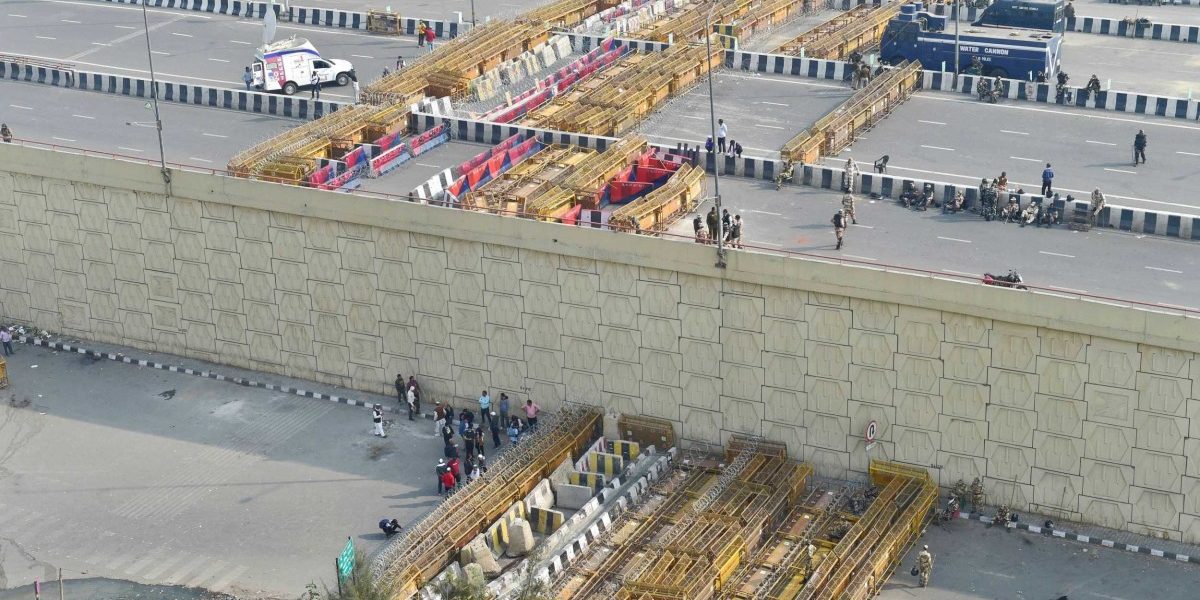 Barricades set up at the Delhi-UP Ghazipur border to stop farmers from marching towards the national capital, during their ongoing agitation against Centre's farm laws, in New Delhi, Tuesday, Feb. 2, 2021. Photo: PTI/Vijay Verma

New Delhi: A group of 141 lawyers has written to Chief Justice of India S.A. Bobde, asking him to take cognisance of the Ministry of Home Affairs’ decision to suspend internet services in and around parts of Delhi-NCR during the ongoing farmers’ protests. The lawyers have also asked the court to restrain the Central government from imposing further such restrictions.

Internet shutdown were first put in place during the farmers’ Republic Day tractor march, during which violence broke out in some parts of Delhi. It was then extended after a group of right-wing activists attacked the protest site at Singhu border and pulled down farmers’ tents on January 29. Similar action was also threatened at the Tikri and Ghazipur borders.

The lawyers said in their letter, according to LiveLaw, “As internet services remain suspended in and around the protest venues and its adjoining areas for the sixth consecutive day, farmers are rightly convinced that their voices are being shunned down and only one-sided narrative of the government is being pushed forward, which is a clear attack on the fundamental values of the Constitution.”

The letter to CJI Bobde also relies on previous Supreme Court orders, in which the court had said that access to the internet is a fundamental right under Article 19 of the constitution.

The letter also brings up the Central government’s actions at these protest sites, embedding nails into roads and digging trenches to ensure that the protest sites are cut off and others have a tough time joining them.

“Embedding more than 2000 iron nails, multi-layer metal barricades, cement walls, and heavily armed security officials- these cannot be considered as law-and-order situations. This should be rather termed as fortification! These activities are depriving the protesting farmers of their basic human rights and are in gross violation of the Right to Life enshrined under Article 21 of the Constitution.”

The lawyers have also said that certain media organisations are reporting on the protests in a biased manner, and making farmers’ plight worse. This includes some media channels labelling the farmers as “terrorists”, without any evidence.

Also read: Fortifications Are Feudal, They Do Not Have Any Place In a Democracy

The letter has asked the court to set up an independent commission of inquiry, looking into police inaction and alleged facilitation during the attack on farmers on January 29, action against the mob who attacked the protest site, and strict action against the media and other groups who are spread false and provocative information about the protesters.

“This must be done immediately in order to stop the gross injustice which is tarnishing the fabric of our Constitution and causing colossal damage to the sheen of a democratic country. History will not pardon us if we remain mute spectators to this violation of human rights,” the letter states.