As the Centre greets the CJI-designate, Justice S.A. Bobde, it is time for symbolism to lead to introspection. 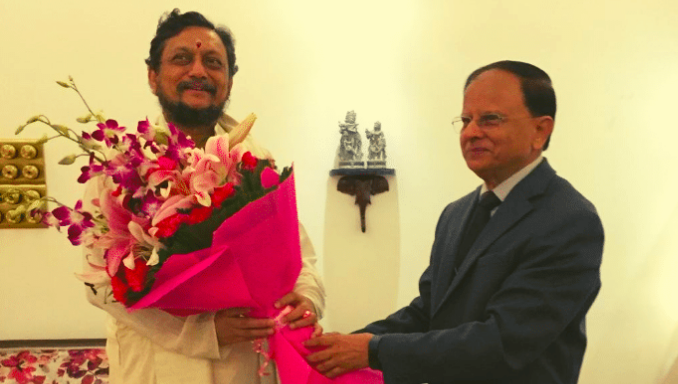 The photograph above of the Chief Justice of India-designate, Sharad Arvind Bobde receiving a bouquet from the Principal Secretary to the Prime Minister, P.K. Mishra, says it all.

Never before has the bonhomie between the government of the day and the Supreme Court been so explicit.

If it is just a convention to elevate the senior-most puisne judge of the Supreme Court as the CJI, upon superannuation of the outgoing CJI, then the photo-op with a representative of the Central government, that too of the prime minister of the day, could well have been avoided, as the CJI does not owe his office to the government.

Nor does the government have to feel obliged to officially greet the CJI-designate, unless it wants to convey a message of sorts, because it is after all a litigant before the court.

The elevation of the CJI, in conformity with the principle of seniority, is not a meaningless convention.

It is an insurance against the government’s meddling in the appointment of the head of the judiciary, in whom the responsibility to safeguard the independence of the judiciary rests.

In the Second Judges Case (1992), the Supreme Court made this convention an inviolable rule, in view of the transgressions – aberrations to the rule – which took place before and during the Emergency.

Therefore, public display of felicitations from the executive to the assumption of office by CJI-designate should be considered an embarrassment, if not frowned upon by the judiciary.

Having said that, one wonders why the office of the CJI, who is just the first among the equals in the Supreme Court, should be treated differently from other judges when it comes to his appointment. After all, the government of the day does not greet individual judges of the Supreme Court when they assume office.

Article 124(2) is the source of power for appointing a CJI. It says:

Did  the framers intend to preclude consultation with the outgoing CJI, regarding the appointment of his or her successor?

It is unlikely, as the convention of the outgoing CJI recommending the name of his next senior-most judge in the Supreme Court as his successor, is also cast in stone. The outgoing CJI’s recommendation could well be considered as the consultation. The proviso appears to have been added just to make the succession less rigid, as the mandatory requirement of consultation with the outgoing CJI in the case of a sudden vacancy in the office of the CJI, could result in a stalemate of sorts.

During the hearing of the National Judicial Appointments Commission (NJAC), the media reported an interesting discussion in the Supreme Court regarding the status of the CJI. The question whether the CJI is actually the “Chief Justice of India” or the “Chief Justice of the Supreme Court of India” was posed by a member of the NJAC bench, Justice Kurian Joseph to the Centre, which was a respondent in the case.

The question arose because the bench was curious to know whether the political class, through the NJAC, should be given an equal role in the appointment of judges, including the CJI.

The bench took note of the inconsistency in the way the Constitution identified the Chief Justice in two different places.

Both the then Attorney General for India, Mukul Rohatgi and the petitioners’ counsel, Fali Nariman considered it an important question to be given serious thought, but did not bother to answer it in the subsequent hearings.

The 2015 judgment in the NJAC case does not tell us whether the office of the CJI – explicitly mentioned in Article 124 (1) – itself is part of the basic structure, as it is intrinsic to the independence of judiciary, which has been recognised as part of basic structure of the Constitution.

Instead, the NJAC bench found the NJAC Act unconstitutional because it did not provide an adequate representation to the judicial component in the NJAC, and therefore, it is insufficient to preserve the primacy of the judiciary, in the matter of selection, appointment, and transfer of judges to the higher judiciary.

But the bench’s silence on the status of the CJI does not leave us in doubt. The Constitution does not prescribe a separate oath of office for the CJI; but the NJAC bench considered the primacy of the CJI as synonymous with that of the judiciary.

The CJI was to be the chairperson of the NJAC. The other members of the NJAC were two other judges of the Supreme Court next to the CJI, the Union Minister for Law and Justice and two eminent persons to be nominated by a committee consisting of the prime minister, the CJI  and the leader of the opposition in the Lok Sabha (or the leader of the single largest opposition party in the Lok Sabha).

Also read: Give and Take: The Supreme Court’s Way of Business

Any two members of the NJAC could exercise a veto to stymie a recommendation without assigning any reason.

It is important to know why the NJAC bench considered these features of the NJAC Act as inconsistent with the principles of independence of judiciary and separation of powers.

The bench found merit in the argument that the executive is the largest individual litigant, in matters pending before the higher judiciary, and therefore, cannot have any discretionary role in the process of selection and appointment of judges to the higher judiciary.

The continuing stalemate over the finalisation of the Memorandum of Procedure (MoP) to streamline appointments and transfers of judges of higher judiciary – in conformity with the guidelines laid down in the NJAC judgment – is a clear pointer that the Centre seeks to frustrate the outcome of the 2015 judgment, by bringing in the NJAC through the backdoor.

In these circumstances, any sign of bonhomie between the executive and the judiciary in the routine appointment of the CJI, does not augur well for the tenure of the next CJI.