While the order dated January 6 was withdrawn in another order issued on January 10, by then the court staff already cleaned a temple. 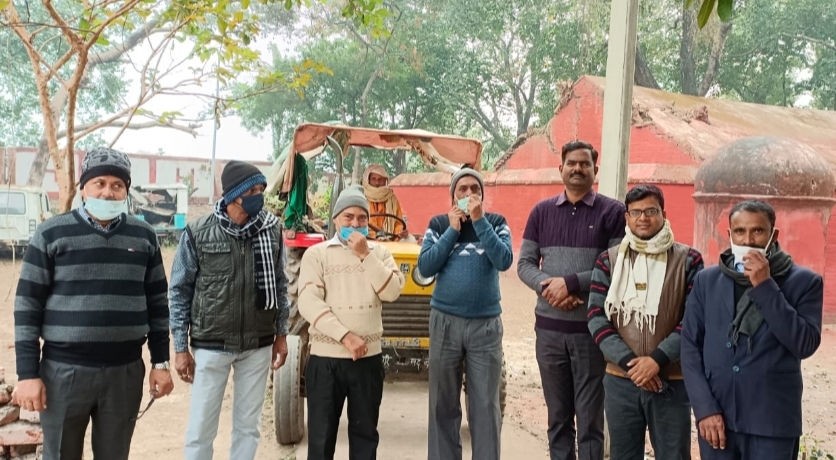 Buxar court staffers posing for a photo near the Bhairav temple after cleaning it. Photo: By arrangement

Patna: A bizarre official notice issued by a Buxar civil court officer to clean temples near the city’s Circuit House has sparked a huge controversy as it falsely claimed that the chief justice of the Patna high court gave such a direction.

While the order dated January 6 was withdrawn in another order issued on January 10, by then the court staff already cleaned a temple.

The January 6 order was signed by the in-charge officer (admin) of the Buxar civil court. It says, “As directed, in the light of direction of Hon’ble the Chief Justice of Patna High Court, Patna, all Presiding Officers of Courts alongwith their respective Court’s Staff shall be cleaning Temples in the morning on 09.01.2022, situated beside Circuit House if they are not engaged in special sitting of their respective Court on 09.01.2022 for hearing on Final Form, as directed earlier. This is for kind information and needful (sic).” 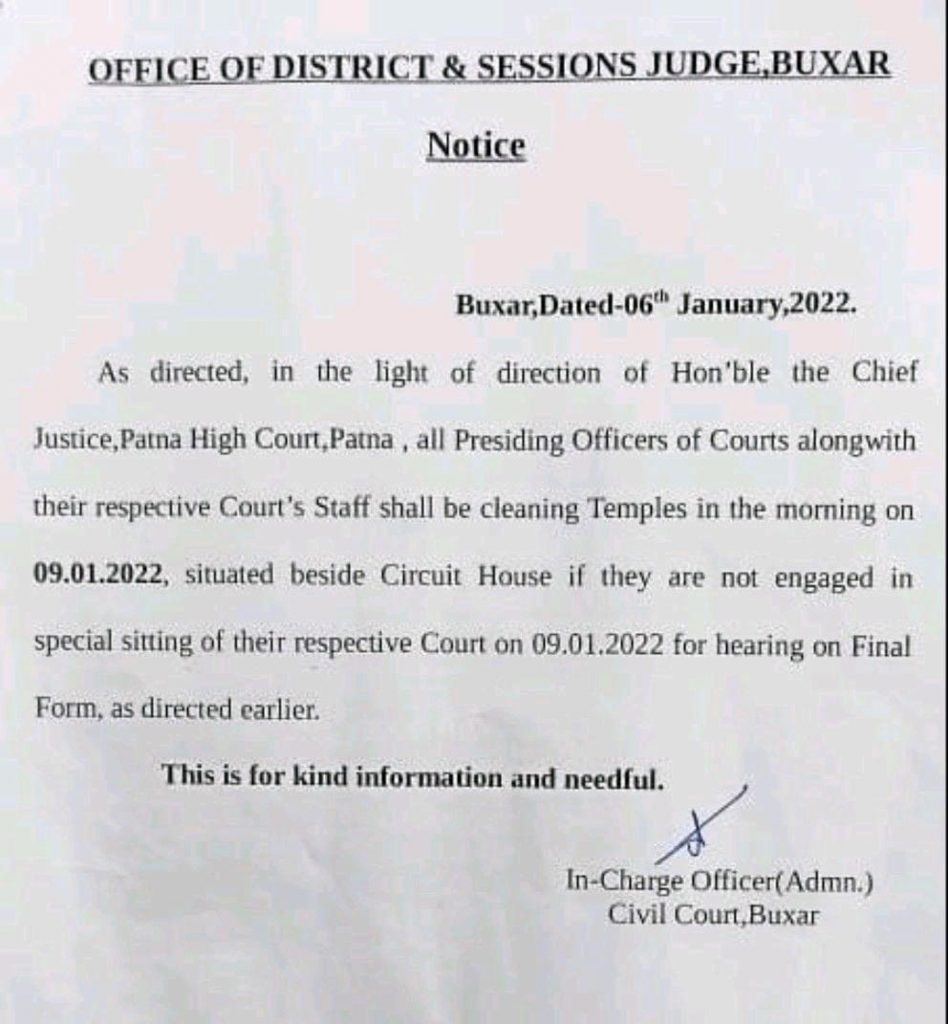 Following the order, the Bhairav temple was cleaned by court staffers on January 9.

When the controversial order came to the notice of lawyers and other people, they questioned its nature.

According to sources, the notice was brought to the notice of Chief Justice Sanjay Karol, who ordered it to be withdrawn immediately. On January 10, a day after the temple was cleaned, another notice was issued.

The second order reads, “The notice dated 6/1/2022 issued by in-charge officer (admin) where all the judicial officers and staff of civil court were directed to remain present for cleaning temples is withdrawn forthwith.”

This notice was signed by the district judge of Buxar and denied that the chief justice of the Patna HC gave any direction to clean temples. It says, “No such directions were given by Hon’ble the Chief Justice of the high court of judicature of Patna (sic).”

“There appears some mischief in [the] issuance of the aforesaid notice. The said notice was also not issued under the directions/instructions of the undersigned. The matter is being [i]nquired into,” the new notice concludes.

A source close to the district judge told The Wire that since the notice mentioned the cleaning of a temple specifically, it sparked controversy. “The chief justice took it seriously and instructed it to be withdrawn and issue a fresh notice,” the source said.

“He found waste dumped between Barood Ghar and the temple. He expressed displeasure and asked the judicial staffers who were present to get the area cleaned,” the source said.

Dharmendra Tiwari, the additional district judge (ADJ) and secretary of the District Legal Service Agency has termed the January 6 notice a “clerical error”.

He told The Wire, “The district judge and I were ill. The staff had issued a notice. It was just a clerical mistake and we have withdrawn it when it came to our notice.”

Tiwari corroborated the source’s claim that the chief justice had asked the litter near the temple to be cleaned.

“We informed the local municipality. Then the district judge told a court staffer that a notice should be issued in this regard, instructing the court staff to visit the temple on January 9 to monitor the cleaning process,” he said.

“The court staff may have thought [wrongly] that since the chief justice had visited the Bhairav temple, he had ordered that the temple should be cleaned. So he issued that notice,” he told The Wire.

Asked why it took four days for the notice to be withdrawn, Tiwari said, “The district judge was on leave. I was also on leave, so we could not see it earlier.”

But some officials shared photos of them cleaning the temple on social media and the caption specifically mentioned that the Bhairav temple was cleaned.