Book Review: Chronicling the (Mis)use of Sedition Law in India

In 'The Great Repression', Chitranshul Sinha takes us on a journey of the historical-legal development of the law, its implications and the role of the judiciary. Pleading guilty before a trial court in March 1922, Mahatma Gandhi, who was charged with sedition, is reported to have said: “What in law is a deliberate crime…appears to me the highest duty of the citizen.” In his submission just before reading out his formal written statement in the court, he had appealed to the judge that “the highest penalty” should be awarded to him.

The sedition law, according to Gandhi, is “prince among the political sections of the Indian Penal Code designed to suppress the liberty of the citizen.” He told the court that, “I have studied some of the cases tried under it (section 124A of IPC) and I know that some of the most loved of India’s patriots have been convicted under it. I consider it a privilege, therefore, to be charged under that section.”

Notably, those charged and convicted under the law include a number of nationalists like Bal Gangadhar Tilak, Annie Besant, Mahatma Gandhi, Maulana Abul Kalam Azad, Jawaharlal Nehru and several others.

Given the rampant (mis)use of the law during the colonial era, one would have thought that the makers of independent India would have struck it down from the statute book. Unfortunately, that was not to be. And not only does it continue to be in our statute book, but it has also frequently been used against dissenting citizens.

A look at some of the recent cases against politician Simranjit Singh Mann (2005), medical doctor and human rights activist Binayak Sen (2007), thousands from Kudankulam in Tamil Nadu (2011), cartoonist Aseem Trivedi (2012), student leader Kanhaiya Kumar (2016), hundreds of tribals of Pathalgarhi in Jharkhand (2018), Chattisgarh journalist Kamal Shukla (2018) and Assamese scholar Hiren Gohain (2019) indicates that its use  is not much different from that in the colonial era. In fact, while during the colonial period sedition was considered a crime against the king/queen or the state (rajdroh), in independent India, it has become synonymous with being against the country and the nation. Hence, contrary to Gandhi calling it “the highest duty of the citizen”, in India today, if you are charged under the sedition law, the general public begins viewing you as being ‘anti-national’.

The obvious question is, how did we reach here? Were there no efforts to undo this sort of repression? What was the role of the courts and the legislature in these cases? And above all, what is the way forward?

In The Great Repression: The Story of Sedition in India, Supreme Court lawyer and columnist Chitranshul Sinha provides answers to some of these questions in great detail. In doing so, Sinha takes us on a journey of the historical-legal development of the law against sedition while providing interesting snippets from courts, parliament and several publications and speeches through which acts of sedition were alleged to have been committed. 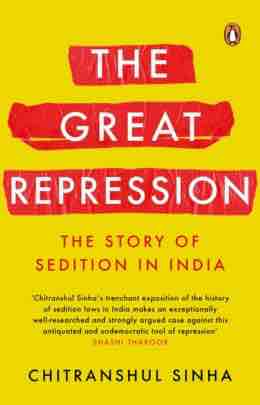 Chitranshul Sinha
The Great Repression: The Story of Sedition in India
Penguin Viking, 2019

Divided into three sections (namely, Origin Story, Early Life, Sedition in the Republic) and 11 chapters, it is nothing short of a primer on the law and its implications. The book also chronicles some of the lesser-known and discussed cases, such as those of Maulana Abul Kalam Azad, Ramo Birua and Arun Jaitely.

The author informs us that it is not so that efforts have not been made to strike down the law from the statute book. What is interesting, however, is how it found its way to the Fundamental Rights Sub-Committee of the Constituent Assembly, headed by Sardar Patel.

After much opposition and deliberation, while “the word ‘sedition’ was dropped from Article 13 of the draft Constitution, Sedition under section 124 A of the IPC continued to be a statutory offence as Article 372 of the Constitution provides that any existing law in force in India as on 26 January 1950 would continue to be in force in India unless explicitly modified or repealed by the legislature.”

The author rightly notes that after ‘sedition’ was dropped from the constitution, section 124A of the IPC should have ideally been declared void by the parliament. But that did not happen because ruling parties and alliances across political ideologies were likely not interested in it as it helps them control, discipline and set right their opponents in the garb of ‘rule of law’.

Efforts at repealing/amending the law

In 2011 (during the Congress-led UPA government), the then Rajya Sabha member and now general secretary of the Communist Party of India (CPI) D. Raja introduced a private member’s bill to repeal the law, arguing that “this section is used precisely against those who fight for the people.”

Speaking in the Upper House of the parliament, Raja said that “(t)his section is being misused mostly against those activists and organisations who are basically working among the poorest of our people. Do you believe that there is a need to have this section even after six decades of independence?”

In response, the then minister of state for home affairs justified its continuation citing the 42nd report of the Law Commission, which recommended the strengthening of Section 124A. Terming it essential, the government said that “the section certainly strengthens the authority of the State. It is essential to have a strong State to safeguard the democratic setup. Section 124A of the IPC is absolutely compatible with democracy.” 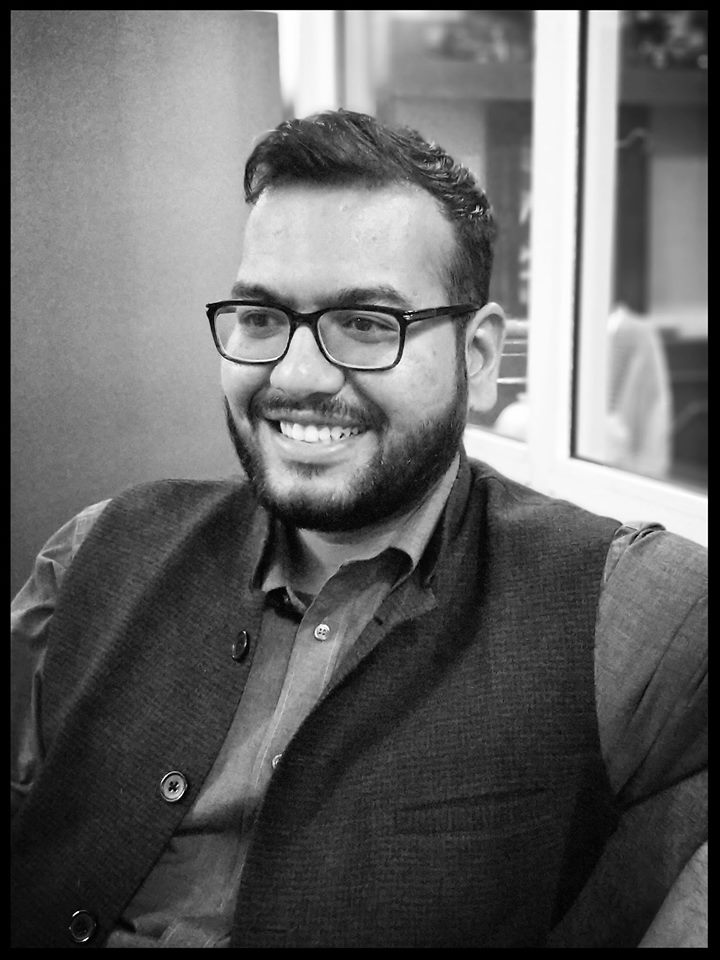 However, the minister further added that “there is no harm in reviewing the provisions of this section to make it more in tune with the present-day need of the society and freedom of speech and expression.”

Requesting Raja to withdraw the bill, the minister added that “the government recognises the imperative need to reform the criminal justice system of the country by introducing a comprehensive legation in parliament.” Given the government’s assurance, Raja withdrew the bill. It is another matter altogether that the government failed to fulfil its promise.

Another attempt to undo the repressive law, as Sinha chronicles in the book, was made in 2015. This time, by Congress MP Shashi Tharoor under the BJP-led NDA government. He introduced a private member’s bill in the Lok Sabha, proposing amendments to the law. Demonstrating “the inefficiency of the Supreme Court’s judgement in Kedar Nath as the lower judiciary and law enforcement agencies continued to misplay the law against the sedition”, Tharoor called for the amendment which “clearly lay down what the Supreme Court read into the provision in the judgment.”

Here, it can be noted that in Kedar Nath Singh vs State of Bihar (1962), a five-judge bench of the apex court ruled that:

“(a) citizen has a right to say or write whatever he likes about the Government, or its measures, by way of criticism or comment, so long as he does not incite people to violence against the Government established by law or with the intention of creating public disorder. The Court, has, therefore, the duty cast upon it of drawing a clear line of demarcation between the ambit of a citizen’s fundamental right guaranteed under Art. 19(1)(a) of the Constitution and the power of the legislature to impose reasonable restrictions on that guaranteed right in the interest of, inter alia, security of the State and public order.”

But if we look at the post-Kedarnath sedition cases, the Supreme Court ‘guidelines’ have been rarely followed by the police and trial courts. It is in this context that Tharoor’s bill gains importance. But like D. Raja in the Congress-led regime, Tharoor’s bill during the BJP-led regime did not bear any fruit. This despite the fact that prominent members of both the parties have been charged under the law on flimsy grounds.

In the book, Sinha draws our attention towards another important aspect of the continued presence and (mis)use of the law and the role of the judiciary, including the Supreme Court. For example, referring to a PIL filed in the apex court by NGO Common Cause and Kudankulam activist S.P. Udayakumar, in which the prayer before the court was to lay down specific guidelines for sedition cases, Sinha explains how the Supreme Court missed the opportunity to set the record straight.

He rightly points out that the Kedar Nath judgement “does not provide (guidelines) for pre-arrest requirements and compliances. Any person arrested for sedition will have to obtain bail, attend proceedings, make themselves present for investigations, etc. before chargesheet is filed or the case is closed.”

To substantiate his point, Sinha gives several recent examples in which cases were filed on flimsy grounds. It is in this context that the author’s point of view that instead of passing an order which just emphasises on Kedar Nath, an attempt by the apex court to impose some mechanism – as the Bombay high court did in Aseem Trivedi’s case – for arrest in the cases of sedition, makes more sense.

However, where the book falls short is that despite having a separate chapter on the subject on the future course of action, it ends abruptly without outlining what could be done by different stakeholders. It would have been helpful if the author would have used his practitioner’s experience to make suggestions. Nevertheless, it is an important book for those interested in modern Indian history, politics and policymaking.