The Kathua Bar Association had even talked about stopping the crime branch from filing a chargesheet in a public statement. 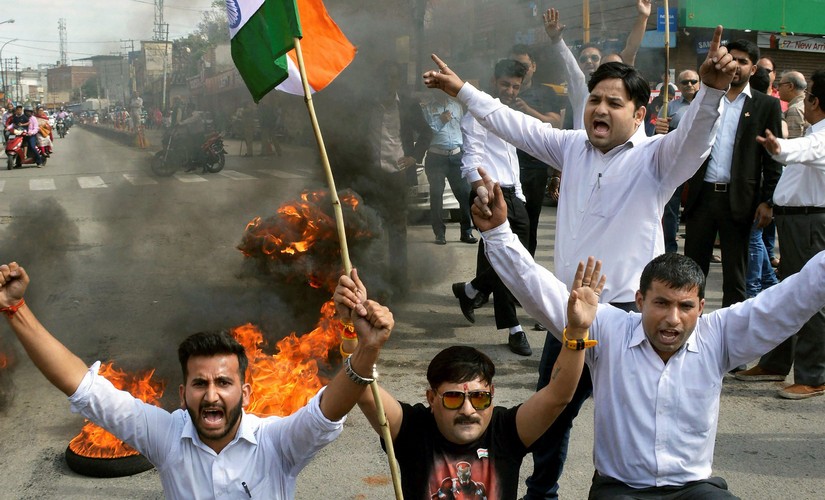 Srinagar: On April 26, the Bar Council of India (BCI) told the Supreme Court that there is no record proving that lawyers prevented the police from filing a chargesheet in the Kathua case. This despite the fact that on April 9, the Kathua Bar Association openly celebrated its ‘success’ in obstructing the Jammu and Kashmir police’s crime branch from filing a chargesheet on the rape and murder of an eight-year-old girl.

“All the members of the Bar have strongly agitated against the presentation of challan by the crime branch in Rasana case…the agitation of the Bar proved successful and the crime branch was compelled to go back and the challan couldn’t be presented in the court of Chief Judicial Magistrate (CJM) Kathua,” Bar president Kirty Bhushan Mahajan had said in a statement issued the same evening.

It’s no surprise, then, that the BCI’s claim that there was nothing on record to show that the lawyers prevented the team led by senior superintendent of police Rakesh Kumar Jalla from performing its duty was met with outrage back in J&K.

The Kathua Bar Association’s candid admission in its statement to the media isn’t the only proof of its obstructive role. A report of the principal district and sessions judge, Kathua, an affidavit filed by the J&K high court before the apex court and the state government’s report also put the Kathua Bar in the dock.

The crime branch team probing the case was on its way to the chambers of the chief judicial magistrate, Kathua, on April 9 to file a challan against seven of the eight accused, when they were stopped by lawyers of the Kathua Bar Association and Young Lawyers’ Association, who had gathered on the court premises.

In a video that is available online, the lawyers can be seen shouting slogans like ‘Kathua Bar Association zindabad‘ and ‘Go back, crime branch go back; we want CBI probe’.

A senior police official said that though a team of the J&K police was rushed to the court, the protesting lawyers didn’t let the probing agency’s team perform its “lawful duty”.

The drama continued for more than an hour, following which the crime branch team was forced to return along with the seven accused. It later filed the chargesheet the same evening, at the chief judicial magistrate’s official residence.

“We will not under any circumstances allow presentation of this chargesheet by the crime branch until transfer of the investigations to the CBI,” Bar president Mahajan can be heard saying in the video soon after the crime branch team left the court premises.

Four days after the incident, the Supreme Court slammed the lawyers for obstructing legal process in the case and sought an explanation from the BCI, J&K high court and state government on the issue.

The BCI formed a five-member team led by former high court Justice Tarun Agarwal and sent it to Jammu on a fact-finding mission.

In its report, submitted to the top court on April 26, the BCI said the Kathua lawyers didn’t prevent the crime branch team from filing a challan before the court and blamed the media for “misreporting”.

In fact, the council went beyond its mandate and said the “demand” for a CBI probe into the crime “seems to be justified”. It also dismissed repeated statements from advocate Deepika Singh Rajawat, who is representing the victim’s family, alleging that she was threatened by the lawyers’ body and warned against appearing before the high court.

During their visit to Jammu, the BCI team had neither met any crime branch official probing the case nor any official from the J&K police, which has filed a case against the lawyers over the April 9 incident.

In his report to the registrar general of J&K high court on April 10, the day after the incident, principal district and sessions judge Kathua, Sanjeev Gupta, wrote in detail about the protests by the lawyers outside his chambers. He wrote:

“As soon as the Crime Branch team arrived in the premises of the court of Chief Judicial magistrate, a group of lawyers resorted to a massive and intense protest demonstration. The lawyers numbering 40 to 50 raised slogans against the Crime branch…the other members of the Bar also joined the protest demonstration…the accused seven in number were brought in custody but they could not be produced in the court because of the continued protest demonstration by the lawyers… In the meantime, the court time was over but the demonstration of lawyers continued. The team of Crime branch made a hasty retreat from the court premises and took accused along with them. The Chief Judicial Magistrate remained in his office chamber till 6 pm…the lawyers also remained standing outside the court raising slogans and demonstration. In view of the sensitive nature of the case, the Crime Branch officials were advised to bring the accused to the official residence of chief judicial magistrate at 8 PM.”

The report goes on to say that some lawyers assembled outside the official residence of the chief judicial magistrate at 7:45 pm along with journalists, but left thereafter.

“Almost all members of the Bar Association Kathua have assembled in the premises outside the court and they were protesting vociferously against the production of the challan in the matter (the rape and murder) in the court of the law,” reads the chief judicial magistrate’s report.

In a separate affidavit filed before the Supreme Court, the registrar general of the J&K high court said that reports were received that some lawyers of the Kathua Bar Association created a hindrance when the challan was to be presented before the court.

Subsequently, according to the affidavit, a report was sought from the principal district and sessions judge Kathua, which “confirmed that obstruction was caused by advocates”.

The state government had also filed a separate report to the Supreme Court, giving a detailed account of the protests by the lawyers and how the crime branch team was prevented from filing the challan.

While all the eight accused, including mastermind Sanji Ram, his son and nephew (a minor) and three policemen have already been arrested, the Supreme Court on April 27 stayed the trial in the case and asked the accused to respond to a plea by the victim’s family for a transfer of the case to Chandigarh.

The case is listed for hearing on May 7, but the state government has opposed the transfer. “There are more than 100 witnesses in the case who won’t be able to travel to outside for the case-related matters…there is also the language barrier,” said J&K law minister Abdul Haq Khan.

The victim had gone missing from outside her home in Rasana village on January 10 and her body was found in a nearby forest a week later. According to the chargesheet, she was held captive, sedated and gangraped before the accused killed her on April 14.