The AG has surmised from the tweets that the "clear implication would be that the Supreme Court of India is biased towards the ruling political party, the Bharatiya Janata Party."

New Delhi: Less than a month after he granted consent to one law student to initiate contempt of court proceedings against comedian Kunal Kamra over his tweets during Arnab Goswami’s bail plea hearing in the Supreme Court, the Attorney General for India, K.K. Venugopal, has now assented to another law student’s request for contempt proceedings against cartoonist Rachita Taneja over drawings that deal with the same subjects – Goswami and the apex court.

According to a report by Bar and Bench, AG Venugopal consented to one Aditya Kashyap’s request for contempt proceedings to be initiated against Taneja, after considering cartoons that she drew as part of her popular page, Sanitary Panels.

The page has over 14,400 followers on Twitter and is routinely critical of the government, official corruption, and misogyny.

Among the offending cartoons is one where the BJP and Supreme Court are depicted as stick figures, with a likeness of Republic TV head Arnab Goswami in the middle, saying, “Tu janta nahi mera baap kaun hain.” The popular Hindi refrain is a boast of status acquired through one’s parents, and indicates a decision to bypass due process with the exercise of privilege. As is visible from the date stamp above, the above tweet appeared on the same day as when the Attorney General gave his nod to Kamra’s contempt proceedings.

The AG has stated in his reply to Kashyap that if the above drawing, tweeted through the Sanitary Panels’ handle, “were to be believed, one would have to proceed on the basis that the BJP is somehow interesting in protecting Arnab Goswami and has prevailed upon the Supreme Court to do so. Therefore, the clear implication would be that the Supreme Court of India is biased towards the ruling political party, the Bharatiya Janata Party, and would tailor judgements for the benefit of the ruling party.”

The Supreme Court had granted interim bail to Goswami, who was arrested in a 2018 abetment to suicide case by Maharashtra police. During the hearing, Justice D.Y. Chandrachud had expressed disappointment that the Bombay high court had not intervened in a matter of personal liberty to grant bail to the Republic TV editor.

Many social media users noted that similar treatment was not given to other journalists or activists who have been jailed by BJP-helmed governments.

In the excerpt of the AG’s letter tweeted by Bar and Bench, it is also visible that he has considered another cartoon, referring to the Supreme Court as the ‘Sanghi Court of India’ as one in contempt of the court. The tweet, the AG notes, is:

“…apparently a reference to the Rashtriya Swayamsevak Sangh, with the legend, “Arnab gets bail, real journalists get jail, independent judiciary is fail”, carries a gross insinuation against the Apex Court of this country to the effect that the Supreme Court of India has ceased to be an impartial organ of the state.”

The AG writes that the tweet was “clearly calculated to undermine” public confidence in the Supreme Court’s independence and impartiality. 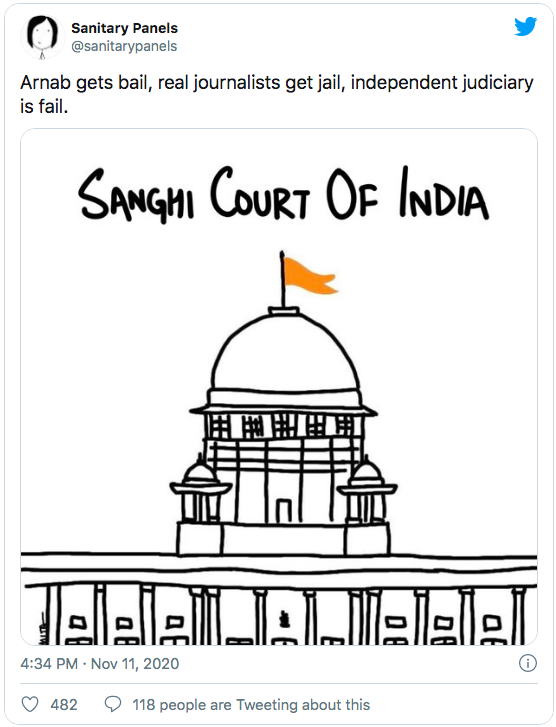 Of late, the perceived partiality of the Supreme Court has been discussed not just by Twitter users but also the likes of retired judges like former Chief Justice of the Delhi and Madras high courts, Justice A.P. Shah.

Kashyap reportedly also mentioned another Sanitary Panels tweet that “depicts a quid pro quo relationship between the judiciary (especially, retd. Chief Justice Ranjan Gogoi) and the Central government in delivering the Ayodhya Judgment,” according to Bar and Bench.