The Struggle of 'Doubtful Voters' Has Intensified in BJP's Assam

The Sonowal government has employed measures that appear designed to pressurise local authorities to work at its behest, all the while creating fear and giving rise to renewed anger among the Muslim community. 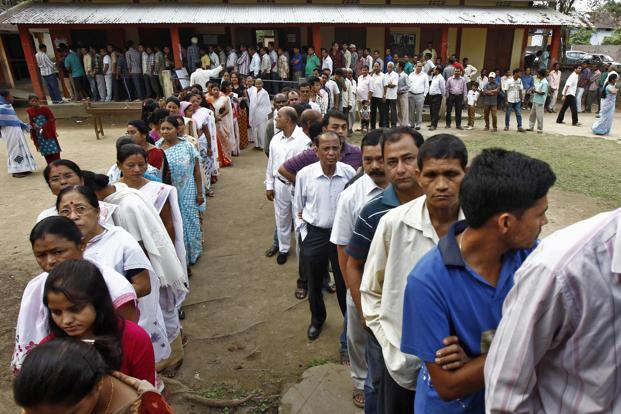 Voters line up to cast their vote outside a polling station in Assam in 2014. Credit: Reuters

On June 30, 22-year-old Yaqub Ali was killed by police fire in the Goalpara district in western Assam. Ali was part of a protest march demanding an end to the harassment of Muslims for allegedly being ‘D voters’. ‘D voter’ is a category of voters in Assam where ‘D’ stands for ‘doubtful’. The citizenship rights, entitlements and privileges of a D voter are withheld until they prove their citizenship.

In 1997, the Election Commission (EC) identified several hundred thousand people as D voters, most of them Muslims, but also including Bengali Hindus, Koch Rajbangshis, Nepalis and others. The process of identifying D voters came into being after a huge political mobilisation led by All Assam Students Union (AASU) and other ultra-nationalist organisations, with the government being asked to carry out an intensive revision of the voters list across Assam.

EC officials were supposed to conduct door-to-door surveys and revise the list after verifying people’s citizenship documents. However, it is alleged that the people were randomly marked as doubtful citizens. There are numerous cases where one or two members of a family were marked as doubtful while others were marked as Indian citizens. There are peculiar cases where government officials, including election officers, and Assam police personnel belonging to the Muslim community are enlisted as doubtful voters. Family members of distinguished Assamese Muslim personalities like film actor Adil Hussain, literary legend Syed Abdul Malik and Padma Shri Eli Ahmed were also branded as D voters and questioned about their nationality.

Listing someone as a D voter is not the only way to strip them of citizenship in Assam. The Assam police has a one-of-its-kind organisation to deal with the so-called illegal migration from Bangladesh. In 1962, the Assam police established a special branch organisation under the Prevention of Infiltration of Pakistan (PIP) scheme. Initially, the organisation was headed by the special branch’s deputy inspector general of police.

This unit was entrusted with detecting and deporting illegal foreigners from Bangladesh, known as East Pakistan at that time. Under the PIP scheme, nearly two lakh Muslims were forcibly deported to Bangladesh without any legal process. When Meghalaya was bifurcated from Assam, it also had border police units, but despite sharing a border with Bangladesh, the state has dismantled its border police units and turned them into normal police outposts.

Currently, the Assam police border organisation is an independent organisation manned by over 4,000 personnel and headed by an additional director general of police of the state police. In 2009, the organisation was further empowered with greater discretionary power to question anyone and to take their fingerprints and photographs. The police have fingerprinted thousands of so-called doubtful people, who are mostly internally displaced people in search of a livelihood. Now they are forced to go through a rigorous and expensive legal process to prove their nationality.

In rural areas, the border police units are entrusted with conducting surveys in villages and sending the names of suspected illegal foreigners to the foreigner’s tribunal. It has even been alleged that border police constables were given set targets to report certain numbers of cases every month. This practice led to thousands of genuine Indian Muslims being listed as doubtful citizen and reference cases were registered against them.

Till October 2016, 6,21,688 people, mostly Muslim, were either branded as doubtful voters or reference cases were registered under The Foreigners Act 1946, resulting in them losing access to government-sponsored welfare schemes, the right to vote, and other civil and political rights granted to an Indian citizen. In February 2017, Assam’s parliamentary affairs minister, Chandra Mohan Patowary, said that the cases of 4,44,189 people were referred to tribunals. Altogether 2,01,928 cases are still pending with the tribunals.

Data shows that of the cases resolved, 92% were able to defend their Indian nationalities. The majority of the remaining cases where the person was declared as foreigner were ex-parte judgements. As per the white paper on foreigners published by government of Assam, 88192 cases were disposed off between 1998 and 2012. Out of 88192 cases, only 6590 cases were declared as foreigners.

Unfortunately, the cases of declared foreigners poses a serious question on the nature of the judgements. Last year, the government of Assam published a list of around 38,000 untraced declared foreigners in the local newspapers. The Assam police also put out a list of nearly 7,000 ‘declared untraced foreigners’. The list has ‘declared untraced foreigners’ from 13 districts of Assam. Out of 13 districts, three districts provide the information regarding ‘manner of judgement’. The data of Mangaldoi district reveals that out of 208 cases of untraced declared foreigners only one person contested his case. In Karimganj district, the ratio of ex-parte and contested case is 938:9, while in Hailakandi district, the ratio is 127:2.  This shows that the cases where people were declared as foreigners by the tribunal were mostly unchallenged or that the court didn’t examine their nationality at all.

Why people are protesting now

Protests against the arbitrary filing of reference cases and listing as D voters is not new in Assam. There has been a constant demand and mobilisation from the Muslim community to stop harassing them for being illegal Bangladeshis. However, there have been visible changes in the approach of the government in dealing with the issue. The BJP-led state government in Assam came to power by mobilising the majority communities on the issue of alleged illegal immigration from Bangladesh. Since coming to power, the government’s actions have created more fear among the Muslims, while also feeding their anger and frustration. Certain measures have eroded the credibility of the foreigner’s tribunal and has created an environment of utter helplessness among the Muslims.

Soon after coming to power, chief minister Sarbananda Sonowal met the members of the foreigners tribunal and told them they have now got the opportunity to work for a national cause, a chance they should not miss. Is it okay for the head of a state government to lecture members of a judicial body? Is this not an interference into the judiciary’s independence?

There is a noticeable fear psychosis among the Muslims because of government’s fascist and anti-Muslim initiatives. Besides already increasing the number of foreigners tribunals from 36 to 100 and detention centres from three to six, and setting up a detention centre in Goalpara, the government is also strengthening IT infrastructure to crack down on the alleged illegal foreigners more efficiently. The Assam police is creating an exclusive database of so-called suspected and declared foreign nationals. Once the central database is developed, photographs and fingerprints of a;; alleged foreigners could be shared with various law enforcement agencies with a click of the mouse.

Organisers of the Goalpara protest on June 30 allege that by challenging tribunal’s orders in high court, the government is trying to harass another 40,000 people whose nationalities were upheld by the tribunal. The government has already approved the filing of writ petitions in 50 such cases.

Scores of Muslims have been lodged in detention centres across the state with little or no sign of ever being set free. This fear and frustration was evident at the Goalpara protest. So desperate and helpless are the victims, that their faith now only lies in the belief that ‘Allah will render all arms and ammunition ineffective during the protest’ over the judicial and democratic institutions of world’s largest democracy.