In conversation with Arun Shourie on dissenting judges, judicial independence and the 'established' media. 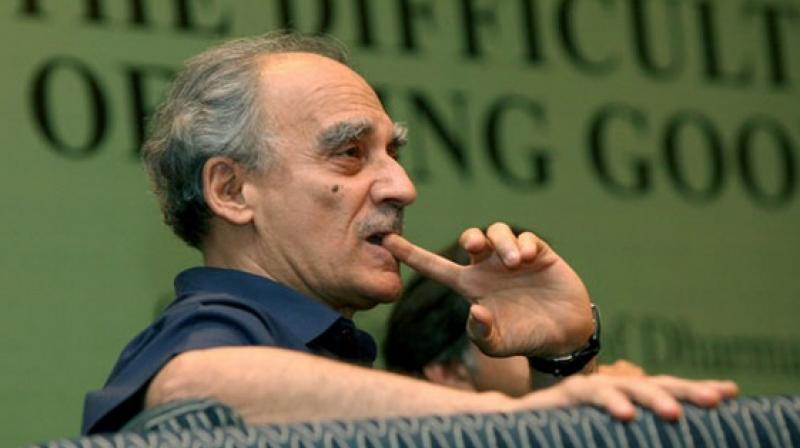 Former Union minister and BJP leader Arun Shourie spoke to The Wire about recent occurrences at the Supreme Court and where the judiciary should go from here. Full text of the interview, conducted via e-mail, is reproduced below.

How do you view the unprecedented act of four senior-most Supreme Court judges addressing the media directly to warn that all is not well with the way the Supreme Court was administered by the Chief Justice of India and that democracy itself was in peril if the independence of judiciary was compromised?

Gandhiji used to counsel patience in the face of wrong-doing. But, he always said, when we are confronted by – and I am using his words – “an intolerable wrong”, and when we have tried all other means and that wrong has not been rectified, then we should not be held back from taking the next step. It is evident from the letter that the judges released as well as from what they said at the press conference that they had been raising the issues with the Chief Justice for months – the letter itself was written before November 8 when the decision in R.P. Luthra’s case which is mentioned in the letter was recalled. And nothing but nothing had been done. As Justice Chelameswar and Justice Gogoi affirmed at the press conference, the allocation of the Loya case was the last straw.

What about their saying that they decided to place the matter before the people because democracy itself was in danger?

Most certainly. The affliction to which they drew attention – of cases being assigned to selected benches without any rationale or rule, and in total disregard of well-established conventions – will, if allowed to continue, completely but completely undermine the judiciary. Remember that the letter of the judges makes clear that this practice is not confined to the present, it has been festering and swelling: the sentence in their letter reads, “There have been instances where cases having far-reaching consequences for the nation and the institution have been assigned by the chief justices of this court” – note, they wrote of “chief justices”, not just one chief justice – “selectively to the benches ‘of their preference’ without any rational basis for such assignment.” How is this different from the practice on which judges themselves come down with a heavy hand – of the accused choosing their prosecutors, as happened in Jayalalithaa’s case, unfortunately with the concurrence of the high court and the Supreme Court; or the accused choosing who will judge their case? Can the judiciary survive such an evil and wicked practice? And can democracy survive if even the judiciary is open to being fixed by the accused or, worse, by the political rulers?

Some argue the judges did not go far enough to say that the CJI was acting under pressure from the executive. This has enabled the Centre to simply interpret the event as an internal matter among the judges of the apex court. The government is now hinting that it may review the entire system/procedure for judges’ appointment as the SC collegium appears split on the whole matter. What do you have to say?

The political executive will always try to take advantage of any and every situation – especially one like the present one which, as I have pointed out time and again, has an instrumental view of everything, one which looks at every person, every institution, every occasion from only one point of view: “How can I put this man, this institution, this occasion to use?” As for the charge that by going public the judges have paved the way for the government to interfere, that is utter nonsense. You can bet your life that at all times a government such as the present one makes sure it knows, and in fact it does know, what is going on among judges. The precaution is not that judges should keep silent in the face of that “intolerable wrong” but that citizens should be alert to the designs of government. They – that is, you and me, and everyone – must be a firewall around the court, and expose every effort of the government to use such an occasion for furthering its own designs. And it is true: the judges must be left to sort out the disagreements, and in particular to devise rules for dealing with the matter which has led to the present situation, that is rules – fair and unassailable rules – for assigning cases between benches.

Some RSS leaders have accused the judges of showing indiscipline. What is your view?

First, I am afraid many in the RSS go by the superficial. And I wonder if you know how pleased some people have been with some of the past judgments of Justice Dipak Misra? Have you read the judgment he delivered when he was in the Madhya Pradesh high court in regard to that film, Kabhi Khushi Kabhi Gham, and what he said about the national anthem in it? It is exactly the kind of judgment that would please self-acclaimed “nationalists” no end, when, in fact, the judgment is so farcical as to be an embarrassment. It was set aside by the Supreme Court. Recently, the same petitioner filed another petition on the national anthem, this time in the Supreme Court. And, by one of these minor miracles, this petition came up before Justice Misra himself. And so he delivered his order on national anthem in cinema halls. That, too, must have pleased them no end. Only that Justice Misra has had to nullify his own judgment in that very case! Nor is it just the past. Given what they think is his proven record, many persons are looking to him to ensure a judgment on the Ram janmabhoomi matter that will help further what would be of such enormous help to the present rulers come the next election.

But they did keep things within the Supreme Court – that is clear from the letter. It is when doing so yielded no rectification that they went public. As for “dirty linen,” people use phrases loosely. When they say “washing dirty linen in public,” they are saying that there is dirty linen. And whose linen is it? Certainly not of the four judges! Don’t worry about such phrases. The question: have the facts which they have disclosed and which have come to light since then, true or not? Has a single fact been shown to be wrong?

There are two themes. Two of the cases you mentioned – Birla-Sahara diaries and Kalikho Pul’s case – were of intense interest to the UPA rulers. The Birla-Sahara diaries and the Loya case are of intense and anxious interest to the present rulers. That is why the public should be very vigilant about what happens in these cases. Second, the suicide note of Pul, the Loya case, and of course the Medical College case involve the judiciary. I would have expected that for this very reason the judges would deal with them with utmost thoroughness. It really leaves one so disheartened that such strenuous efforts have to be made to have them even turn their eyes to these cases, cases that involve the judiciary itself.

What do you make of Prashant Bhushan’s complaint against the Chief Justice?

The complaint that Prashant Bhushan has filed is one of the most persuasive and most courageous documents that I have read in a long, long while. Over the years I have seen how lawyers, like so many of us other professionals, fight shy of saying in public what they say in private: they fear of doing so because they know that they have to appear before the same Judges tomorrow. Prashant Bhushan has put his loyalty to the judiciary above his personal, professional interests. That is what doing one’s duty by the country means.

What do you think should be done now? You have said in the past that the government is systematically eroding institutions. How do you think the apex judiciary can be rescued  in the present circumstances. Who should take the lead?

Of course, it is the Chief Justice who must take the lead. And there are two simple, straightforward ways for him to do so. First, he should sit across with the senior-most judges and devise transparent and fair rules for the allocation of cases between benches. Second, he should do what I would expect any honourable man to do: he should himself ask the five senior-most judges to inquire into Prashant Bhushan’s charges at utmost speed, and report the results in public. The matter would end, the institution would have been strengthened, what so many see as a “crisis” would have been transformed into an opportunity for reform.

Election victories seem to have emboldened PM Narendra Modi view that his highly disruptive approach to dealing with both policy and key institutions is valid. So much so that his own ministers are openly saying “we are here to change the Indian constitution”. RSS says the constitution does not reflect Indian ethos/culture. Where do you think we are headed? Can we see the disruption of the apex judiciary as part of a larger project? You control legislature which makes law. And you then control the final interpreter of the law too.

The body language, and the language he used in the Gujarat campaign, do not suggest to me that the PM is what you say, “emboldened”. He seems a bit desperate. In any case, with the way time is flying away, with the way problems remain unsolved, and are even getting aggravated – whether it is the condition of the banks or rural distress – he should be worried. As for “we are here to change the Indian constitution,” as for that “larger project”, I wonder if you remember that those were the exact words, that was the exact candour of Mussolini, and later of Hitler! I can give you reams on that whenever you want!

As Editor of Indian Express, you had been in the forefront of media campaigns for restoration of democracy whenever institutions had been under attack in the past. How do you see the media today compared with those times?

I am saddened beyond words. The media has become an instrument in the hands of rulers: even the one paper that still publishes facts that are liable to inconvenience rulers has to now carefully balance itself – giving so much space to factotums who, to the knowledge of everyone, can’t write a word themselves, whose literary career soars on the old formula, “One post, one ghost.” Such silence, such balancing show how much pressure is being exerted on the media. I am absolutely certain that if a document such as Prashant Bhushan’s complaint had been made when we were all in Ramnathji’s Indian Express, we would have cleared a full page that very day and published the entire document. So, the established media must be seen today as “the established media” – that is, as part of the establishment.