Pointing to the speed with which the Goswami petition is being heard, the senior advocate writes that “it gives an impression that clients represented by certain lawyers are getting special treatment”.

A bench of Justice D.Y. Chandrachud and Justice Indira Banerjee will hear the petition at 10.30 am on Wednesday.

According to the records available with the Supreme Court registry, Goswami’s petition has nine ‘defects’, including the fact that the vakalatnama is unsigned. The court does not normally list a petition before a bench until the defects are “cured”. 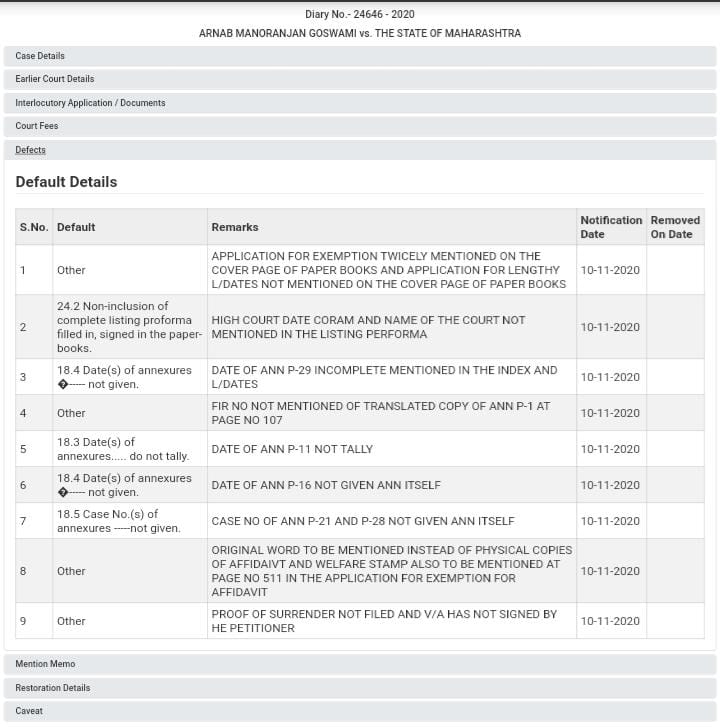 List of defects in Arnab Manoranjan Goswami vs the State of Maharashtra petition listed before vacation bench of the Supreme Court. Source: Supreme Court registry

Citing how thousands of citizens have been stuck in jail for long periods of time as their matters are not getting listed before the court, Dave, a senior advocate, addresses the secretary general and says that he wishes to lodge a “strong protest” with regard to the listing of Goswami’s case in such an instantaneous manner.

“The serious issue here is selective listing of matters that the registry under your leadership is indulging in for last eight months during the COVID-19 pandemic… It is, to say the least, deeply disturbing as to how and why every time Mr Goswami approaches the Supreme Court, his matter gets listed instantly,” the letter reads.

Dave writes that he does not mean to “interfere with his rights to move the SC” in any way, and is only penning this letter out of concern based on “requests from various advocates on record to the effect that the matters filed by them are not getting listed for weeks and months” even though they involve urgent and serious matters – including petitions for bail. The senior advocate cites the example of how former finance minister P. Chidambaram spent many months in jail as his petition for bail languished before the court.

Pointing out how the matter for the Goswami case “was filed yesterday, got an instant diary number and is listed for tomorrow”, Dave writes that “it gives an impression that clients represented by certain lawyers are getting special treatment, which does not speak well if the great institution that the Supreme Court is”. Dave asks that all urgent listings made before November 10 be heard first.

Goswami, who was arrested on November 4 by Raigad Police in connection with the suicide of an interior designer, was sent to judicial custody for 14 days by the chief judicial magistrate, and is currently lodged at Taloja Central Jail in Navi Mumbai.

“The likes of Goswami get special treatment while ordinary Indians are made to suffer, including imprisonment, which are many times illegal and unauthorised,” he writes, asking whether the listing was made based on a special direction from either the Chief Justice of India as it is “quite well known that such extraordinarily urgent listings of matters cannot and does not take place without specific orders from the CJI”.

Dave also mentions how many advocates on record have made complaints about how matters filed by certain advocates get an “instant listing”, while other are made to “wait in queue for long time, sometimes against the same judgement being appealed against”.

“Why is this selective listing taking place when system is supposedly computerised and is to work automatically? Why is there no foolproof system to be just and fair to all citizens and all advocates on record?” he asks, calling the listing a “gross abuse of administrative power”.

He calls the secretary general’s attention to the challenges faced by lawyers during the COVID-19 pandemic with their livelihood being seriously impacted during the lockdown.

Dave ends his letter by suggesting that the court move to a better video platform to ease the technical issues that have plagued the court over the past few months, as the functioning of the SC so far has been “quite truncated and limited” with fewer benches in session.

He requests the secretary general to “install a foolproof system to ensure urgent listing on well-known principles” as the “direct and debilitating effect is on the delivery of justice and rights of citizens – at least the common man”.