The court also ordered the release of all environmental activists who have been detained. 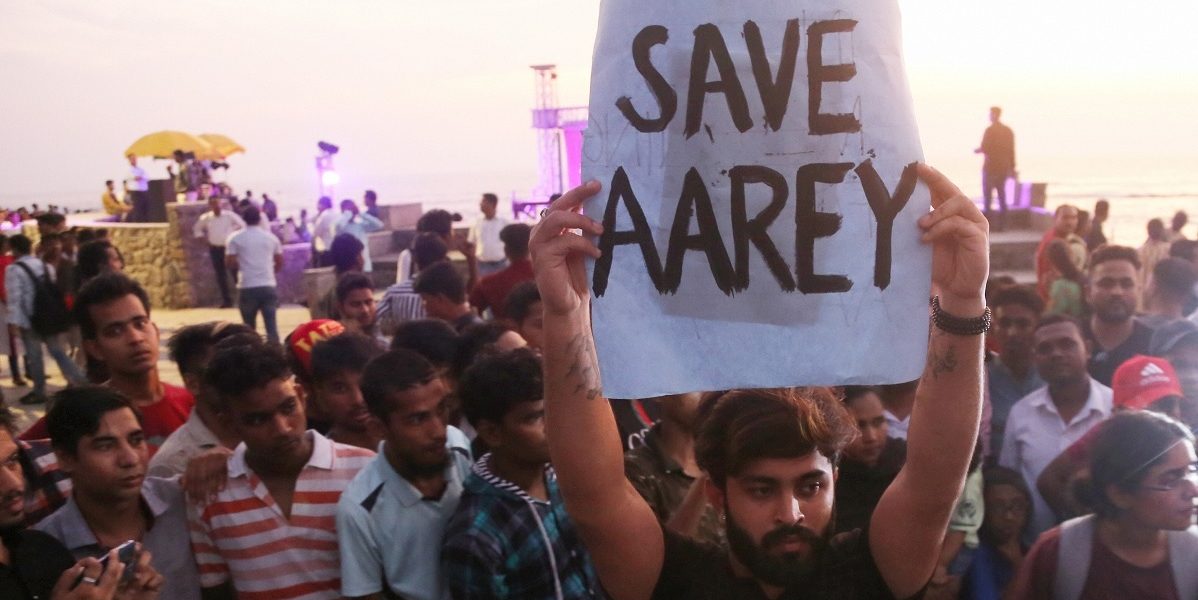 A protestor at a rally against cutting down of trees at Aarey Colony in Mumbai on October 6, 2019. Photo: PTI

New Delhi: The Supreme Court on Monday ordered that no more trees be cut in Mumbai’s Aarey forest until October 21, when it would hear a plea against the government’s decision to clear the area for a metro car shed.

The court also asked all activists who have been detained for protesting the government’s action to be released.

According to LiveLaw, solicitor general Tushar Mehta, appearing for the Maharashtra government, undertook that no further trees will be cut. A Supreme Court special vacation bench of Justices Arun Mishra and Ashok Bhushan said the legality of trees that have already been felled can be decided by the environment bench after the Dusshera vacation.

According to NDTV, the Maharashtra government said that no more trees need to be cut in Aarey as “those that needed to be removed have been cut”.

The bench was constituted after a group of law students wrote to Chief Justice Ranjan Gogoi on Sunday asking the court to intervene and stop the trees from being cut. The students said they were forced to approach the Supreme Court because the Bombay high court rejected an application moved by environmentalists seeking a stay on the cutting of trees until the matter is head before the Supreme Court.

Senior advocates Sanjay Hegde and Gopal Shankaranarayanan appeared for the law students who filed the petition. They said the issue whether Aarey is a forest or not is pending in the Supreme Court, according to LiveLaw. The National Green Tribunal is considering whether the area is an eco-sensitive zone and therefore, the authorities should have refrained from cutting down trees until a decision was taken, they said.

Aarey is considered a “green lung” of the city as it is one of the few areas that have dense forest cover. Both the Mumbai Metro Rail Corporation and the BJP-run state government have maintained that Aarey is not a forest area and hence the trees can be axed.

After the Bombay high court on Friday refused to declare the Aarey Colony a forest area. It also declined to quash a Brihanmumbai Municipal Corporation (BMC) decision allowing the felling of over 2,600 trees in the suburban green zone for a metro car shed.

However, the court’s Chief Justice Pradeep Nandrajog had orally observed that he hoped authorities will not start cutting the trees before the petitioners moved the Supreme Court, according to reports.

Authorities began felling of trees at around Friday midnight. On Saturday, activists, citizens, celebrities and politicians began protesting the move. Several politicians were taken into preventive custody and released later. Section 144 of the Indian Penal Code, which prohibits assembly of more than four persons in an area, was imposed around the colony. The 29 environmental activists who were arrested were sent remanded to five-days judicial custody.

The Shiv Sena, which runs the BMC and is a partner in the state government, has vehemently protested the decision to cut the trees. Other opposition parties have also voiced their support for the protests.