'You Can't go Back': Migrant Workers Told in Tamil Nadu

Two days ago, the Karnataka government, after a meeting with prominent builders, announced that it would not facilitate the travel of migrant workers back home on the grounds that their labour was needed to restart the economy. This declaration attracted widespread criticism and has been suspended for the time being. However, in neighbouring Tamil Nadu, the government is doing much the same thing covertly, without any open declaration.

I’m part of a volunteer group, the Chennai Citizens COVID Fund for Migrant Labour: this came together soon after the first lockdown was announced in order to reach out to migrant workers stranded in different parts of Tamil Nadu. Over the last six weeks, we have been in touch with roughly 18,000 workers. Over the past week, the group has been inundated with calls from workers desperate to go home and asking how they can do this.

After the official announcement that state governments were free to arrange transport for stranded workers, Tamil Nadu appointed a special officer to coordinate travel arrangements. In practice, there is complete lack of information and widespread chaos. Two helplines were set up, but the staff handling them spoke only in Tamil and had no information to pass on. No public announcement of any process to count or register those who wanted to return was made and no schedule of train departures provided.

The government took several days to create an online form for workers asking to go. This form is in English: it asks workers to provide an email address among other things. It was originally prepared for Indians stranded outside the country and is being reused for migrant workers without any regard for their actual circumstances.

Meanwhile, migrant workers are trying to do whatever they can to publicise their desire to go back home. Some groups went to offices of the Chennai Municipal Corporation or police stations, others to the office of the district collector or local tahsildar (depending on where they happen to be). At most of these places they were turned back with threats. In some cases, their names etc. were taken down, but they were not informed of what, if anything, would happen next.

It is certainly not the case that the Tamil Nadu government cannot act efficiently or lacks the capacity to send workers home. It is clear its actions (or non-actions) are designed to keep them penned up in their workplaces in order to help employers in the industrial and construction sectors. An official told one of our volunteers on condition of anonymity that those in charge of making travel arrangements had been ordered to go slow until the government figured out ways of restarting work. It has not hesitated to use the police to “persuade” workers to return to their workplace camps. 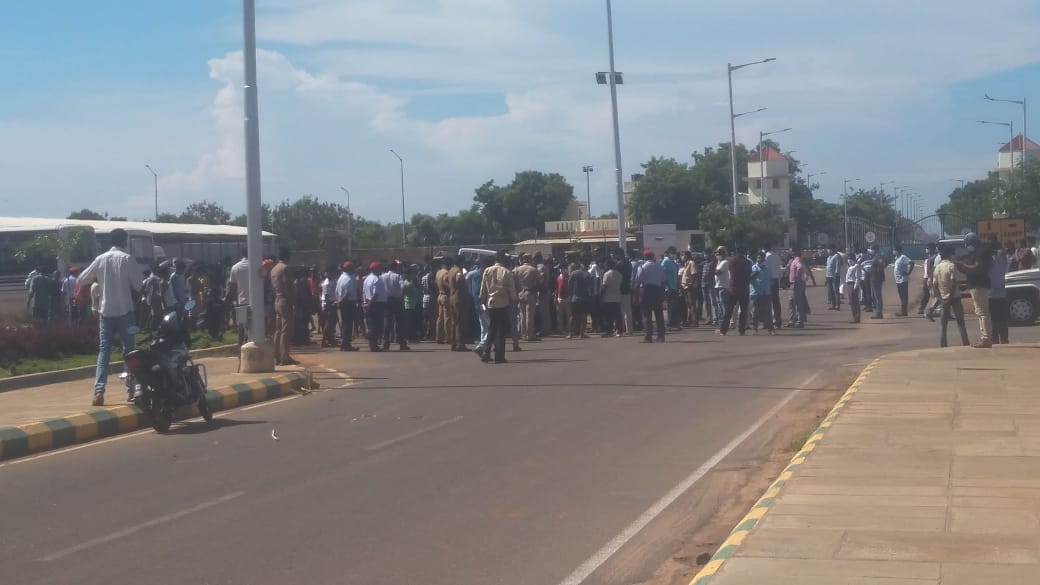 Hundreds of workers living in crowded conditions on three sites of L&W Construction Private Ltd, a 100 percent subsidiary of Lee Kim Tah-Woh Hup Holdings Pte (a Singapore based company), asked to go home. There are videos showing the police confronting them, telling them they must return to work, and the gates of the site being locked in order to prevent them from coming out again.

Before this, our helpline got in touch with some of these workers over a complaint about inadequate rations. A volunteer spoke to one Subramani, a project manager, who confirmed that each worker was being given just 200 grams of rice a day: this, he claimed, was enough since they were only “eating and sleeping”.

After repeated phone calls, complaints to the labour department and inquiries from the press, ration supplies to L&W sites showed a marginal improvement, but not before one of the whistleblowers who got in touch with us was reprimanded and threatened. The irony of the story is that the rations the company was distributing came from a state agency (the Board of Construction Workers) and not its own coffers. None of the workers at L&W were paid any wages during the lockdown. Despite this, they were told to get back to work: they have refused and are waiting to go home.

Another group of workers on a Chennai Metro Rail construction site find themselves trapped there. They worked for a sub-contractor of Saraswathy Engineering Ltd. (contracted by Chennai Metro Rail), who disappeared without paying their wages a week before the lockdown commenced. One day before the lockdown, Saraswathy Engineering told the workers it would employ them directly, but without taking any responsibility for unpaid wages. Each worker was paid 500 rupees a week during the lockdown as an “advance”. One of the site engineers explained to our volunteer that this was to make sure that the workers would remain, so as to restart work whenever the lockdown was lifted.

When our group raised the issue of unpaid wages with Chennai Metro Rail Limited, they responded by saying that there were no pending payments to Saraswathy Engineering, and that they bore no responsibility for sub-contracts. These workers want to go home too, but they fear they will have to forgo their unpaid wages. In addition, they point to the presence of security guards onsite, where they are living. Workers at another CMRL site (employed by Gannon Dunkerle) also wish to leave but are waiting for unpaid back wages dating from January.

Some 300 people working for the construction giant L&T at the Koodankulam power plant have been told to return to work even though they are reluctant (for fear of infection). Even in normal times, they cannot leave their camp without gate passes—now they are literally under watch.

Another group of 38 workers at the Sree Lakshmi Venkateshwara Spinning Mills in Tiruppur district is desperate to go home. They live on the company’s premises and were given rations (but not wages) during the lockdown. When they said they wanted to leave, they were told that work would be restarting soon. They were threatened with arrest if they tried to go anywhere. They’ve been waiting in limbo, eating rice and watery dal: the factory has not restarted operations yet. Another group of migrants protested in Tiruppur on Thursday: 15 of them have been arrested for “instigating” the others.

The truth is that migrant workers in Tamil Nadu survived the lockdown as best they could, often on half empty stomachs. They were largely forgotten by their employers. Now both government and employers are acting on the unspoken assumption that workers have to get back to work, whether they want to or not, irrespective of their working and living conditions. In the words of one worker (Sayeb Ali, Murshidabad district, West Bengal): “Are we not humans? Don’t we have families waiting for us, worried about us? What moral right do they have to tell us we need to get back to work?” Another worker, Vijendra Mandal from Giridih in Jharkhand, said, “We are tired and emotionally drained. If we are to stay hungry, we prefer to do it at home, with our family and children.”

In the face of state indifference and active coercion, some workers are undertaking desperate journeys. A group from Jharkhand in Sriperumbudur paid thousands of rupees to a conman who promised to take them back in private buses: he simply disappeared with the money. Three hundred Jharkhand workers stranded in Ooty tried to hire vehicles; they were refused a pass and told that only 20 people would be allowed to travel in one bus, making the journey unaffordable. One worker said that some of them are now planning to cycle home.

The Tamil Nadu government is trying to keep migrant workers hostage in all but name. Every other state has run trains for them, but only one train for migrant workers has left Tamil Nadu so far (from Coimbatore on the night of 8 May for Bihar); another train ferried people who had come to Vellore for medical treatment. The state is working hand in glove with employers, using its coercive powers to restart the wheels of industry.

The pandemic has exposed the underbelly of the Indian economy, shining a light on the inhumane treatment of workers without whom economic activity would grind to a standstill. This is not merely a failure of the state, but that of society as a whole. The absence of effective labour legislation, chronic regulatory failures, the political influence of factory owners and small employers, and the vast size of the informal sector (where labour laws do not apply) means that capitalism in India is almost completely lawless as far as workers’ rights are concerned. This has taught most middle-class Indians to view “labour” in purely abstract terms as an element of production that can be used, withdrawn and abused at will.

Update (on 1 PM of 9 May IST):  Hundreds of workers at the L&W site were allowed to leave their camp on the evening of 8 May. They began walking home (to Jharkhand), but were stopped three or four hours later and transported forcibly to a shelter. This morning, some newspapers reported that the state government is planning to arrange more trains for migrant workers. However, no details have been announced.

With many thanks to the volunteers of the Chennai Citizens Covid Fund for Migrant Labour who helped me put this information together.

Karuna Dietrich Wielenga is a historian. She teaches at the Azim Premji University and is Research Associate, Oxford School of Global and Area Studies, Oxford University.