The temple hires only contract workers, and then takes no responsibility for how they are treated.

TTD employees and workers pay homage to Jyothi, an FMS worker who died on December 11, in Tirupati of Andhra Pradesh. Workers allege harassment by TTD contractors had led to her cardiac arrest and death. Photo: By arrangement

Tirupati: Kranti, a facility management services (FMS) employee, has worked in Tirumala for the last 19-20 years. When she joined, her monthly salary was Rs 1,500; now it’s Rs 6,000 – much below the minimum wage she is entitled to. Even this amount, workers say, is not guaranteed as they are not directly employed by the TTD (Tirumala Tirupati Devasthanam) but through contractors. They are thus paid only for the days they are offered work by the contractors – and are getting as little as Rs 2,500-3,000.

“TTD employees voted en masse for the YSR Congress Party during the 2019 assembly polls, as the current chief minister, Y.S. Jaganmohan Reddy, promised to implement a time scale in three months during his padayatra (Jagan had embarked on a statewide tour on foot a full one year before the polls). It has been three years since then and the promise remains unfulfilled,” rues Swathi, another FMS worker.

To make matters worse, when 4,500 of these workers went on strike for 13 days from November 27 to December 14, the administration refused to recognise them as their employees and chided them for creating a nuisance. Adding insult to injury, they were forcefully evicted from the strike spot on December 10, international Human Rights Day, on the eve of the TTD board meeting on December 11.

The difference between the salary of contract employees and regular employees of the TTD in the table below shows a clear violation of ‘equal pay for equal work’. 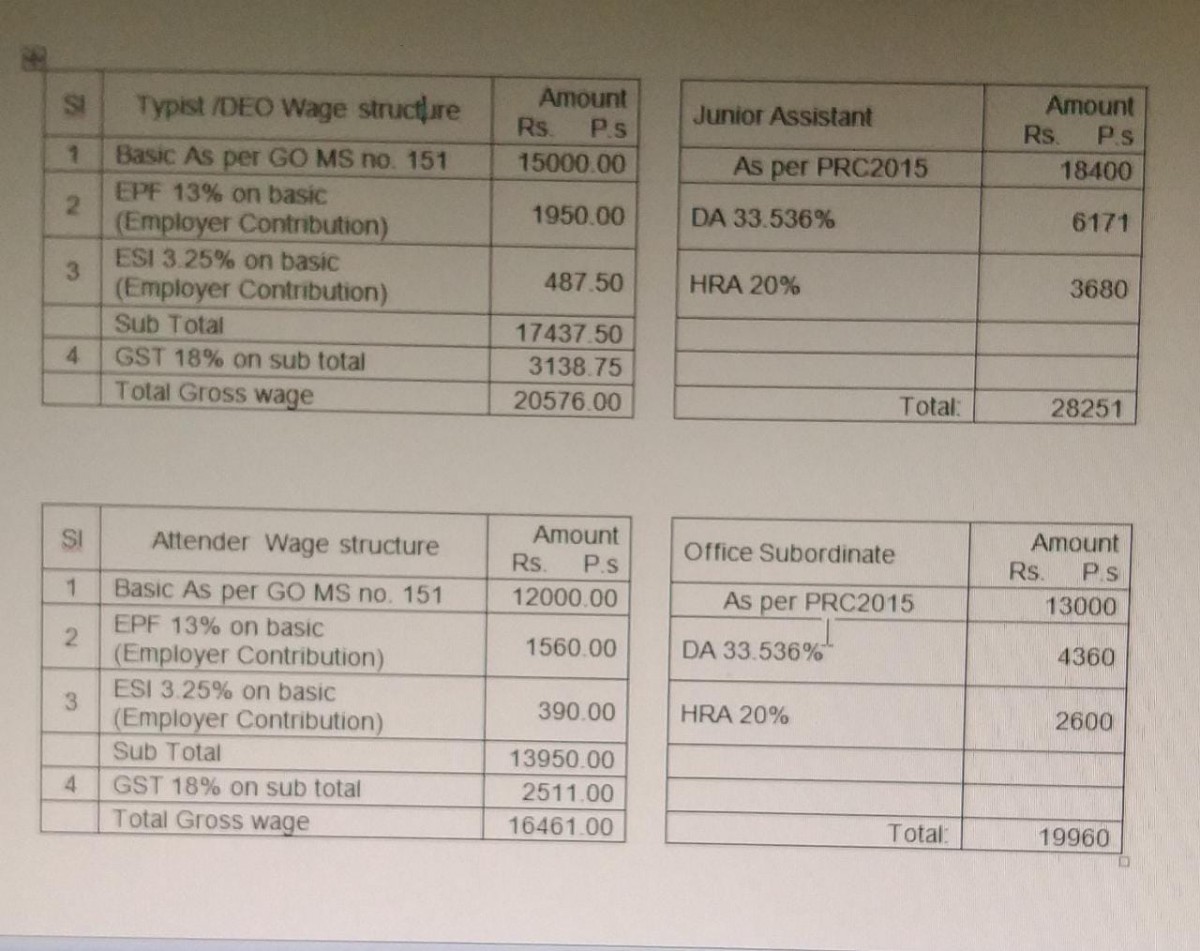 The TTD stopped employing staff on a permanent basis in 1991. It recruited staff only once after that and currently has 14,211 people working on contract, outsourcing, piece rate, programme based and other parameters. It employs nearly 1,140 barbers who tonsure the heads of people on piece-rate basis at Rs 11 per head (increased to Rs 15 after the strike).

Some of these workers told The Wire that for seven years, they worked without any salary and had to survive on doles by devotees. This, not surprisingly, had led to allegations of the staff demanding money from devotees. The piece-rate payment system was started for them five years ago. The temple was projected to earn nearly Rs 106.75 crore from the sale of the hair received in this process in 2020-21.

The FMS staff constitute those who clean the guesthouses owned by the TTD in Tirumala and Tirupati. The condition of FMS staff worsened after the introduction of work contract system, by which the TTD assigns task of maintaining the guest houses to the lowest bidder. The staff are paid by the contractors, who receive payment from the TTD. This leads to the contractors cutting costs by employing less staff to complete the same task, to improve their own margins.

“Thus, the FMS staff who are paid Rs 300 per day after cutting ESI and PF manage to barely earn Rs 4,000 to 5,000 per month. The condition of workers would improve if the TTD hires these employees directly through its own corporation instead of giving a cut to the contractors,” said T. Subramanyam, general secretary, TTD Contract Employees and Workers’ Union.

FMS workers employed by the TTD contractors at their meeting on December 11 in Tirupati, Andhra Pradesh. Photo: G. Ram Mohan

Seventy percent of the FMS employees are women. They are have no job security when the contractor changes every three years. In 2020, some 1,400 of them lost jobs. Denied even a separate place to change their clothes for work, they continue to work for these meagre wages with the hope they will be given time scale (this includes basic pay, dearness allowance and house rent allowance) or absorbed at a future date on a permanent basis, he added.

Some of these employees who work under 73 societies are being asked to join the corporation. “Employees are vehemently opposed to this as they will lose their service and chances of regularisation or even promise of time scale and be sans any job security. Some of them even have high court orders sanctioning them time scale salary. TTD is in contempt of court on this score. This also further violates Supreme Court’s 2013 ruling on equal pay for equal work in State of Punjab vs Jagjit Singh and Others in civil appeal 213 of 2013,” Subramanyam said.

But the TTD, which swears by its oft repeated moto of “Dharmo Rakshita Rakshitaha” (meaning if you follow dharma, dharma will protect you), acted in a retributive manner and issued show cause notices to its permanent employees – M. Nagarjuna, G. Venkatesham and K. Gunasekhar – not allowing them to even give a written reply within the stipulated one week indicated in the notice. “The police notice given to us cites Section 144 and COVID-19 restrictions, which has come in handy for the governments,” Nagarjuna said. Employees said that opting for outsourcing of man power affects the maintenance of proper facilities for pilgrims.

Recent attempts by the TTD to include its contract staff in the APCOS (Andhra Pradesh Corporation for Outsourced Services) was foiled by the employees after a 46-day strike. The employees feared this would make their salaries uncertain and rule out their chances of absorption into TTD as permanent employees. Regular employees of TTD have all facilities given to government employees. Contract system of employment has come to stay across the governments despite promises to the contrary during polls.

Forest department workers of the TTD take out a rally one year after they sat on a strike outside the forest department in Tirupati of Andhra Pradesh. They are seeking implementation of time scale wages which was agreed to by the TTD. Photo: Special arrangement

The MLC (Member of Legislative Council) representing Chittoor district, V. Bala Subramanyam, who negotiated with the TTD chairman Y.V. Subba Reddy on behalf of the FMS employees, said, “The TTD is at the most ready to give some monetary concessions and is not ready to concede any demands for change in employment status by abolishing the outsourcing system through contractors. As changing the status quo would mean giving up on the outsourcing system and conceding demands for time scale or even absorption into permanent posts. This they fear will trigger similar demands throughout the state.”

The union, which withdrew the strike after some monetary concessions were given, alleged the TTD contractors have increased their harassment of employees. A round table meet of various political parties had earlier resolved to seek time scale wages for the employees in line with the promises made by the chief minister during his recent visit to flood-affected areas of Tirupati recently.

The TTD, meanwhile seems to be mulling the development of a third bus corridor even as it cites shortage of funds for paying the employees their dues.

Summing up the mood of the employees left in the lurch in the process, FMS employee Kranti said, “When we ask the contractors why they are hiring less staff, they cite that the contract is given to the lowest bidder of work contract. Everyone wants to have a pie out of our blood and sweat.”

The state of affairs at the world’s richest temple does not bode well for its image and oft-quoted slogan of protecting dharma.

Repeated calls to the chairman and executive officer of the TTD have gone unanswered. The article will be updated once they respond.

Names of employees have been withheld on their request, as they cited persecution of staff in the aftermath of the strike.

G. Ram Mohan is a freelance journalist based in Tirupati, Andhra Pradesh and can be contacted on twitter at @mnirm.