The lack of a cohesive legislative framework stigmatises domestic workers and is a colossal disservice to those who rely on domestic labour for their livelihood.

Shipra Mondal has been a migrant for almost her entire life. Having first moved villages after marriage, Mondal has since shifted around, within the state of West Bengal, numerous times and now lives in a slum in East Kolkata. Her husband works at a construction site, while she works as a domestic labourer in the houses of upper-middle-class families in the vicinity.

Her wage is entirely self-negotiated and depends on her employer’s goodwill. Often, when she falls sick or has to go home to her village in the Sundarbans, her employer finds a replacement and she has to look for a new household to work for.

Shipra represents a demographic that has expanded exponentially in recent years. The domestic care industry is one of the largest, yet least regulated, worldwide. The International Labour Organisation (2015) estimates that of the 67 million domestic workers (above the age of 15) across the globe, 80% are women. The last few decades have witnessed an increase in urbanisation and female migration, and the labour force, both of which are connected to domestic work. Domestic work is a phenomenon associated with each of these, with rural-urban female migrants representing one of the most vulnerable groups likely to be working as domestic labour. In recent years, paid domestic work has emerged as one of the most gender distinctive aspects of urban-ward labour migration.

Akter and Deshingkar (2009) note that 20 million people, mostly women and girls migrate to cities like Mumbai and Delhi in search of domestic work from the eastern states of Orissa, Jharkhand, Bihar, Chhattisgarh, Assam, and Mizoram. A 2004 Delhi-based study distinguishes between live-in and live-out domestic workers and notes that the highest number of live-out migrant workers came from West Bengal, Utter Pradesh and Tamil Nadu while the highest number of live-in domestic workers came from Jharkhand, the latter typically being unmarried.

Occupying a strangely hybrid zone, domestic work represents an overlap of the urban informal as well as the domestic or private sphere. The International Labour Organisation defines domestic work as ‘housework such as sweeping, cleaning utensils, washing clothes, cooking, caring of children and such other work which is carried out for an employer for remuneration’.  Domestic workers occupy different categories – full time live in, and part-time, working for multiple employers.

For many migrants such as Shipra, entry into domestic work was unplanned. Like many others around her, she migrated with her husband, post marriage and later found that she had to contribute to the family’s income. Often, official data gathering tools do not account for people such as Shipra.

A 2011 study conducted by the Centre for Womens’ Development Studies found that much of women’s labour is invisibilised by the fact that the NSSO asks for only one reason for migration. Because most women initially migrate for marriage and later join the workforce, female migration is seen to be largely a marriage-associated phenomenon leading to a probable wrongful estimation of their labour contribution to the economy. The Census of India for 1991, 2001, and 2011 record higher numbers of female migrants, many of whom are domestic workers, but essentially categorise them as migrant wives, whose mobility is tied to their husbands.

Domestic workers make it possible for all members of the employer’s family (and particularly the women whose traditional role they take over) to seek work in the formal sector. As a result, there are strong caste and hierarchical connotations to the question of domestic work and for whom it is a plausible and respected work opportunity. A study from Bangalore found that 75% of interviewed workers belonged to the Scheduled Castes but only 2% were forward castes. A similar argument is made in the context of the international care industry wherein the households of the developed countries outsource the labour of their domestic spheres to domestic workers typically hailing from the developing countries (for instance: the Philippines).

Although research shows that migration (especially inter-state) is associated with better socio-economic outcomes, increased vulnerabilities result in a complicated picture for women who do move – making migration both freedom-enhancing and vulnerability inducing.

Also read: If India Really Wants More Women in the Workforce, We Need to Think More About Migration

“I have spent almost half my life here and this is my home now. I do go back to my village, every few months, but I do not want to go back and live there”- CH.

Chaya H, a tribal woman from rural West Bengal who migrated to Kolkata early in her life considers her move the most positive thing in her life.

For Menoka M, who has migrated several times, however, the picture is more complicated. “I was brought to Kolkata by my mother’s relatives when I was around 13-14. There was no money then for a wedding and so we were sent to work in the city….”

Studies conducted in Mumbai, Delhi and Bangalore find that women tend to migrate to the nearest big city either from within the state or from nearby states. This holds true for Chaya who is an intra-state migrant, while Menoka has migrated both within and beyond Bengal, once travelling to Bombay for an entire year.

“The offer in Howrah was a lot of money. The mother had recently passed away and the father was raising two children on his own. I was a little hesitant because it is a household of men but because they offered a lot of money and it was much closer, I took it,” said Menoka. 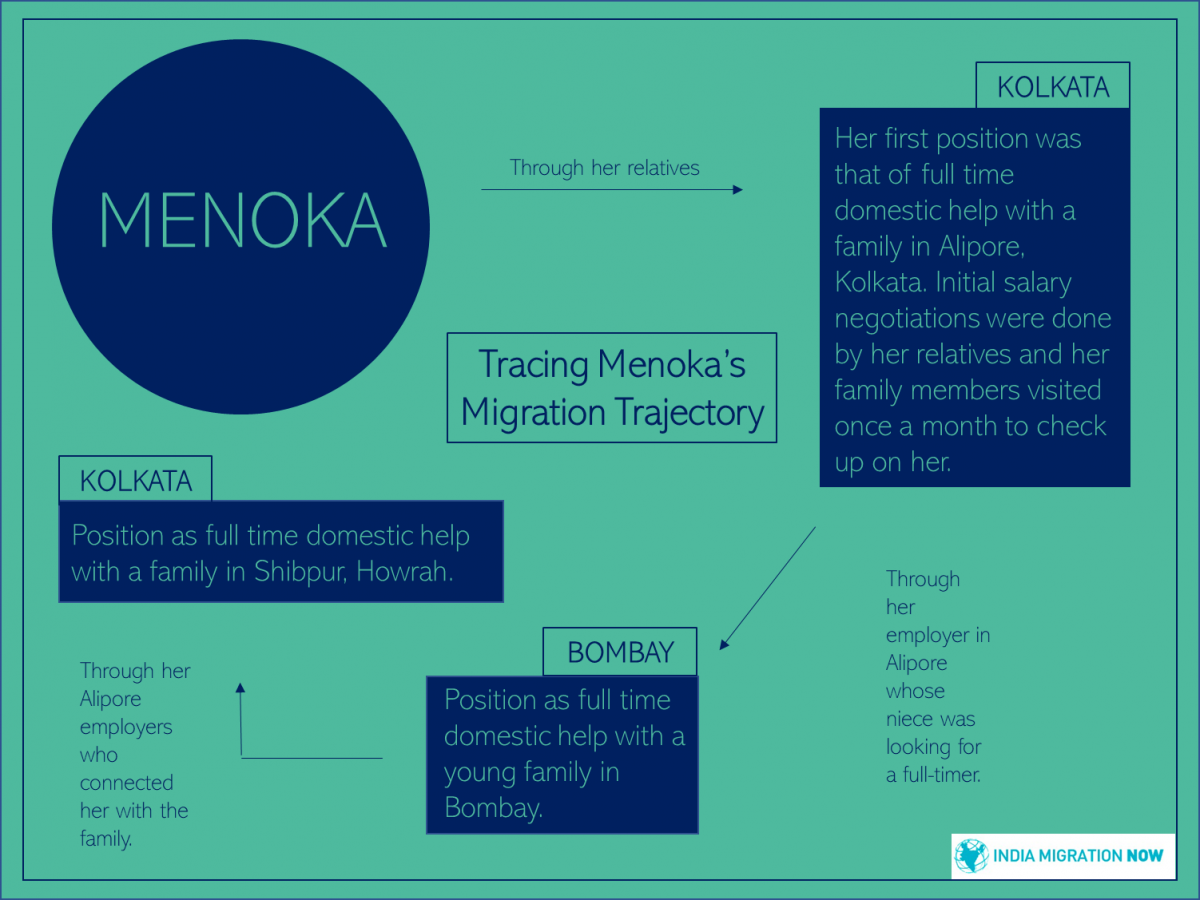 Although Menoka’s experience was a positive one, her apprehension was justified and borne out by the statistics. Migration contributes significantly to the kind of vulnerability and marginalisation experienced by women, especially those from minority backgrounds. National Crime Record Bureau data tells us that the number of reported cases of violence against domestic workers was 3411 in 2010, going up to 3550 in 2012.

Given the relative social and economic privilege at play here, it is also not difficult to imagine that many cases rarely see the light of day. The much-publicised July 2017 incident involving the violent imprisonment of a domestic worker in Mahagun Moderne Society exploded into the public imagination but has since faded from memory. Legal recourse for victims in such situations is also limited, as is the legal and regulatory framework for domestic work in India. 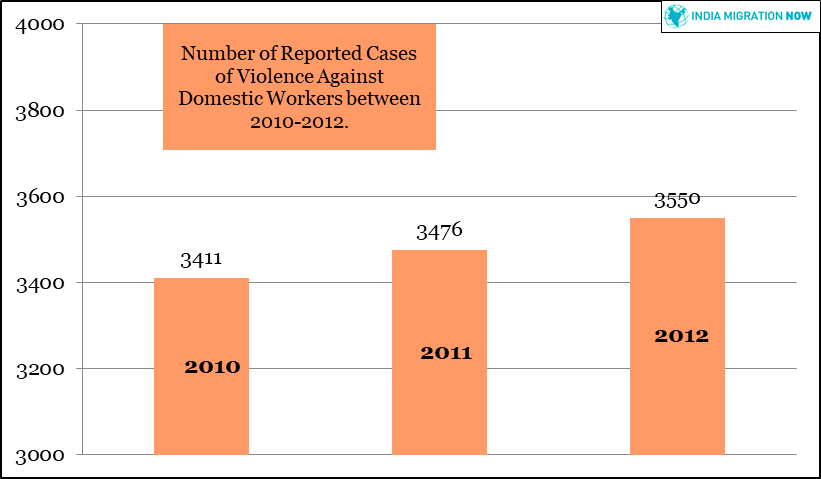 There exists a lack of understanding about the domestic as a sphere of work at all and this impacts the perception of skill, remuneration, and barriers to entry. Although some states have passed minimum wage laws pertaining to domestic work (Kerala and Karnataka, for instance), only Maharashtra, with the Domestic Worker’s Welfare Board Act of 2008 has institutionalised the workforce, with a union, special identity cards, and social security schemes.

In Kolkata, West Bengal, a domestic workers union received government accreditation for the first time in 2018. The picture is far from as bright in other states of the country and virtually nothing exists at the national level although numerous Private Members’ Bills and a Bill drafted by the National Commission for Women have been tabled in both Houses of Parliament over the years.

This legislative blind-spot is not surprising. Migrants do not represent an attractive vote bank to political parties as they are often prevented from voting due to the circumstances of their mobility. Migration requires mobility whereas voting rights demand stability, thereby leading to a large scale, systematic, yet little researched nation-wide disenfranchisement.

“Since coming here, I have voted only once; this year. There is no desire from the party’s side either. They haven’t done much for us.” said Chaya, about the recent national elections. Similar views were held by Menoka who told us that although the local party branch had not done much for her family in the source area, they were quick to entice migrant members back during the elections.

“The convent, Sisters of Charity had helped me get access to a voter ID card here in Hyderabad. Those who have done good things for my home state in Jharkhand, also get my vote here in Hyderabad,” said Lakshmi N., an interstate migrant domestic worker in Hyderabad.

Domestic work is a crucial source of employment for millions in the country, particularly for those from poorer, marginalised backgrounds, especially migrants and irregular immigrants. The lack of a cohesive legislative framework not only further stigmatises the domestic as an arena of work but is a colossal disservice to the many who rely on it for their livelihood and work in increasingly precarious circumstances.

The entry of domestic work into the gig economy (apps such as BookMyBai and GetDomesticHelp), while it does carry the potential for a kind of formalisation of the workforce, also suffers from the kind of insecurities and vulnerabilities that similar independent contractor models used by Ola and Uber do. At the heart of it are the women workers whose day to day vulnerabilities may be enhanced, especially given the classist and misogynistic advertisement campaigns many of these apps are accused of running (BookmyBai’s now-infamous tagline: Diamonds are useless! Gift your wife a maid).

Across India, with the exception of certain states like Maharashtra, domestic workers wage a daily battle trying to provide for themselves and their families with little to no security net from the state. A comprehensive nation-wide rights-based approach which prioritises the needs of female migrants in general, and domestic workers in particular, is now a necessity.

Rohini Mitra and Aarohi Damle are researchers at India Migration Now, a venture of the South East Migration Foundation, based in Mumbai.