With New ‘Industrial Relations’ Code, What Does the Future Look Like for India’s Trade Unions?

Amidst the pandemic, digital acceleration and related developments in the US and the UK, provisions in the Code address India's absence of a central framework to recognise and regulate trade unions. 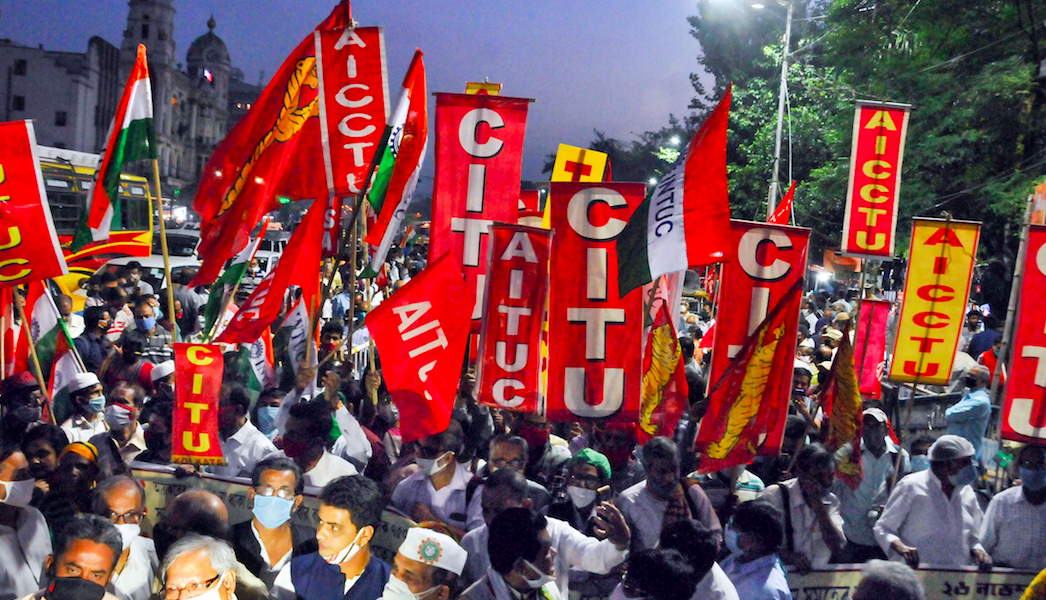 Centre of Indian Trade Unions (CITU) members participate in a rally to support Bharat Bandh which is to be held on Nov. 26, in Kolkata, Monday, Nov. 23, 2020. Photo: PTI

The specific recognition of “negotiating unions” under this is significant in light of the COVID-19 pandemic and fast-growing digitalisation, both of which have necessitated a rethink of the role of collective bargaining and trade unions.

Given recent regulatory developments on this topic in the United States and the United Kingdom, this development in India assumes importance.

The Code and negotiating unions

The absence of a framework to statutorily recognise trade unions at the central level left a long-standing legal vacuum which has been filled by statutorily acknowledging “negotiating unions” and “negotiating councils”, under the Code and the Rules.

A negotiating council is formed where no union has clear majority. In that case, there is proportional representation on the negotiating council of all trade unions with 20% membership or more. The Rules indicate subjects on which a negotiating union may negotiate with employers, including worker classification, wages, working hours, shift timings, promotion and transfer policies.

Although the Code awaits implementation and the Rules are still under consideration, differing views have been expressed on the proposal to recognise negotiating unions, negotiating councils, and attendant procedures. While experts have questioned the efficacy of the proposals on whether workers could follow the same, others emphasise the potential of these proposals to boost investor confidence while also enabling workers to exert greater power.

A brief history of trade unions in India

These developments indicate an important shift in industrial relations. Concepts like negotiating unions and negotiating councils, premised on a sole negotiating body in an establishment, are assuming centre-stage. In other words, newer forms of negotiation between workers and employers, premised on the individual rather than the collective, may be emerging, pointing towards the evolution of collective bargaining and trade unions.

It may be argued that this evolution has already been underway.

Trade unions are, essentially, predicated upon the ‘employer-employee’ relationship where a ‘mutuality’ exists between employers and employees. This traditional employment relationship (and the tripartite relationship among the government, employers and trade unions) has steadily eroded over the past decades, primarily due to newer forms of employment emerging which are characterised by contractual and casual work. Further, the pandemic has perpetuated informal work, aided and complemented by digital acceleration.

Tracing briefly the evolution of trade unions in India, the primary focus upon Indian independence was economic progress. Workers and trade unions were greatly valued for their role in ensuring the economy’s production targets.

In fact, several labour policies formulated at that time protected workers, including provisions of the Industrial Disputes Act, 1947, which required employers to seek government permission for lay-offs and retrenchments – a request often rejected due to the strong ties between trade unions and the government. In contrast, under the Code, permission for lay-offs and retrenchment may be sought only by establishments with over 300 workers, thereby allowing hiring flexibility.

The evolving role of trade unions

Liberalisation in the 1990s, characterised by the abandonment of import-substitution industrialisation and a move towards a free market, triggered a somewhat permanent adoption of outsourcing and atypical employment (contractual/casual work), even in the formal employment sector. The growing fragmentation of a collective workforce resulted in union memberships undergoing stark decline in several industries.

Employers, in order to survive in this highly competitive, globalised world, reduced manpower through voluntary retirements while increasing subcontracting. As per International Labour Organisation ILO estimates, the global union density rate halved from an estimated 36% in 1990, to 18% in 2016.

Further, experts have attributed the changing role of trade unions, globally, to growth in alternate forms of social action and protection provided by employers, states, intermediary agencies, NGOs or emerging social movements and the introduction of CSR initiatives in corporations for the workers’ benefit.

Moreover, human resources departments in many enterprises are observed as having adopted certain functions of trade unions.

The multiplicity of trade unions in a single establishment has also been observed as being counterproductive to collective bargaining, with recognised trade unions often failing to reach consensus (the Code, interestingly, also allows for the creating and maintaining of a sole negotiating union/negotiating council in establishments). 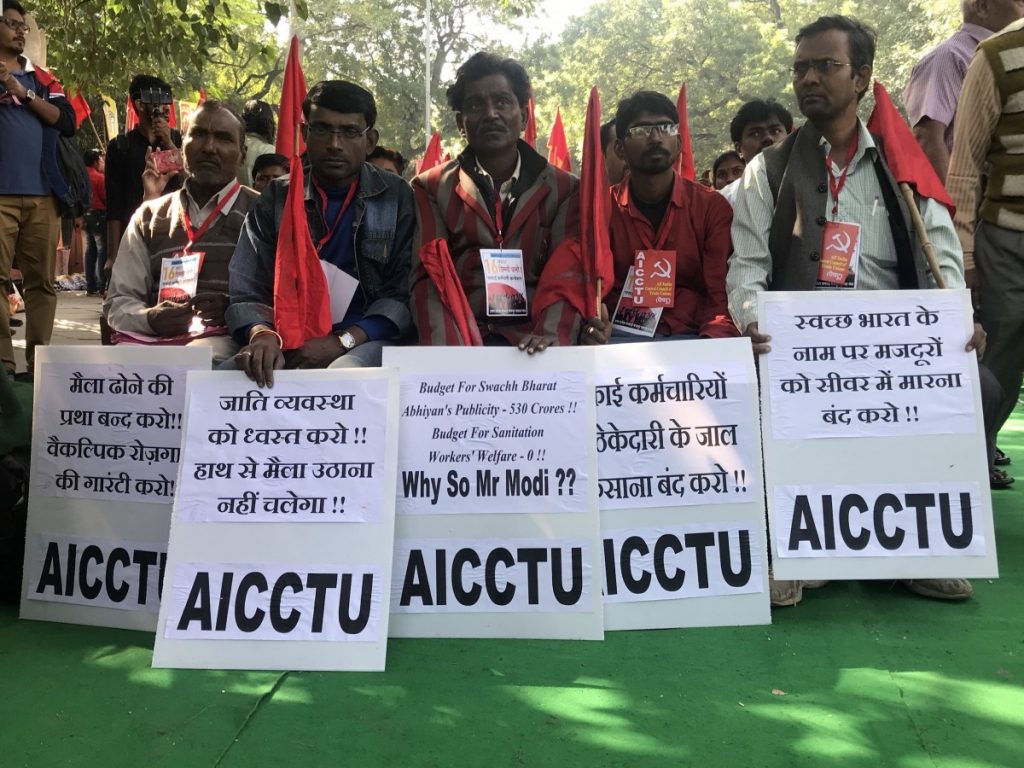 Workers demanding equal wages and social security benefits during a convention organised by the All India Central Council of Trade Unions (AICCTU) at Jantar Mantar in 2018. Credit: Akhil Kumar

The thunderous arrival and perpetuation of gig and platform work globally is historic, having fundamentally altered traditional work formats which are characterised by permanence, homogeneity and predictability. The male, manual industrial worker whose 9-to-5 job was central to his existence is, therefore, a declining species.

The augmentation of this work-format has not only changed how people work, spend, and live in general, but has also impacted traditional industrial relations. Concepts of collective bargaining, trade unions and tripartite consultation, integral to industrial relations, are therefore in flux.

Also read: A Year Into the Pandemic, the Statistical Vacuum on Indian Labour Hasn’t Been Filled

Potential challenges for the trade unions of the future

The shifting ‘employment-type’ relationship in the gig economy and its heterogeneous structure have been observed as impacting trade unions, their role in providing a collective space and associated education and support for workers. Certain challenges trade unions are likely to face in a digitalised future are highlighted below:

(i)  Geographical: Trade union activities depend on physical meetings and discussions; a format being challenged by technology. While app-based gig platform trade unions have seen some success in the past, the challenge lies in organising skilled gig workers (for example, consultants and freelancers) dispersed globally and working primarily from home.

(ii) Youth disinterest: An ILO report suggests that the unionisation gap between young entrants in the labour market and older, retiring workers, is larger than ever. This is unsurprising as the youth today prefer self-employment, transitioning through various jobs. Trade unions, so far, do not cater substantially to these workers. Additionally, trade unions are perceived as tired, archaic bureaucracies, largely irrelevant to the issues of the contemporary world.

(iii) Piecemeal work: Work today is disintegrated and dispersed, being divided into small tasks and paid for accordingly. This disintegration of work isolates individual workers (unlike earlier, when workers could collectivise), effectively altering the balance of power as well as employer-worker negotiations. Such workers lack access to trade union support, given the absence of a conducive framework.

(iv) Equity determined by algorithms: A gig worker’s performance is determined by one-off gigs performed and not by line-management responsibility (prevalent in traditional organisations). This minimises the role of trade union representation. Further, a gig may be performed by different workers each time. This necessitates temporary work relationships, reducing the utility of trade unions.

Are trade unions headed towards a challenging future?

The observations above, demonstrating the interplay between trade unions and a digitalised future, are indeed indicative of a challenging future. The pandemic, however, has thrown up interesting questions for this future.

Reports suggest that, across varying national approaches, opportunities for the revitalisation of collective bargaining and trade unions are being created. At the same time, multilateral organisations like the Organisation for Economic Co-operation and Development (OECD) and the ILO, recognising the pandemic’s impact and resultant economic upheaval, have recommended that social dialogue needs to partake in the post-pandemic “building back better” agenda. Thus, a revitalised future for collective bargaining and trade unions may be underway.

Parallel developments are underway in America and the UK, which are likely to impact the future of collective bargaining and trade unions. It is too early to conclusively state the exact implications of this, globally and for India, given that the Code awaits implementation. However, these developments undoubtedly indicate a resurgence of collective bargaining and trade union activity.

The PRO Act expands the right to organise and collectively bargain via multiple measures. While it is being described as a “sweeping bill”, its reception has been mixed. Some commentators have described the PRO Act as encouraging forced unionisation, adversely impacting flexibility and potentially affecting relationships with independent contractors. On the other hand, the PRO Act has been called a “game changer”, supportive of strengthened collective bargaining.

The decision of the UK Supreme Court in February, 2021, adjudicating whether drivers working on a prominent ride-hailing platform were independent contractors or workers, is shaping up to be extremely important. This decision saw the court unanimously hold that such drivers would be considered ‘workers’. Post judgement, there has been a status reclassification  of such drivers which consequently makes them eligible for benefits such as minimum wages and pension plans. Commentators have pointed to this being made possible by the hybrid status of the “worker” under UK employment law.

Significantly, post-reclassification, the platform has recognised one of UK’s largest trade unions, the GMB, as representing more than 70,000 drivers on the platform. The recognition also extends to collaboration on important issues including earnings, representation, organising and pensions.

Thus, this adoption of a model blending gig work with trade union rights shows that newer possibilities are being imagined for the work of the past and of the future to co-exist and that newer ways of collaborative working, between trade unions and gig platforms, are underway.

Trade unions emerged as a response to the labour problem that emerged during the Industrial Revolution. Over time, collective bargaining and trade unions experienced several setbacks, with the advent of subsequent industrial revolutions. Currently, the Fourth Industrial Revolution, characterised by technological development, may have provided a fresh lease of life to collective bargaining and trade unions, despite indications of the contrary.

The world is currently witnessing a barrage of changes owing to the pandemic and the consequent digital acceleration; all while India undergoes significant labour law reforms. In this, introducing negotiating unions and negotiating councils via the Code addresses the absence of a regulatory framework to recognise trade unions at the central level.

At the same time, the developments in the US and the UK indicate the renewed resurgence of collective bargaining and trade union activity.

As the Code develops and emergent developments elsewhere mature, it would be interesting to see how the regulatory landscape for collective bargaining and trade unions in a post-pandemic world, shapes up.