By weakening labour protection laws to incentivise investments, key initiatives such as Make in India have furthered advantage the interests of global business by couching national interests within corporate interests. 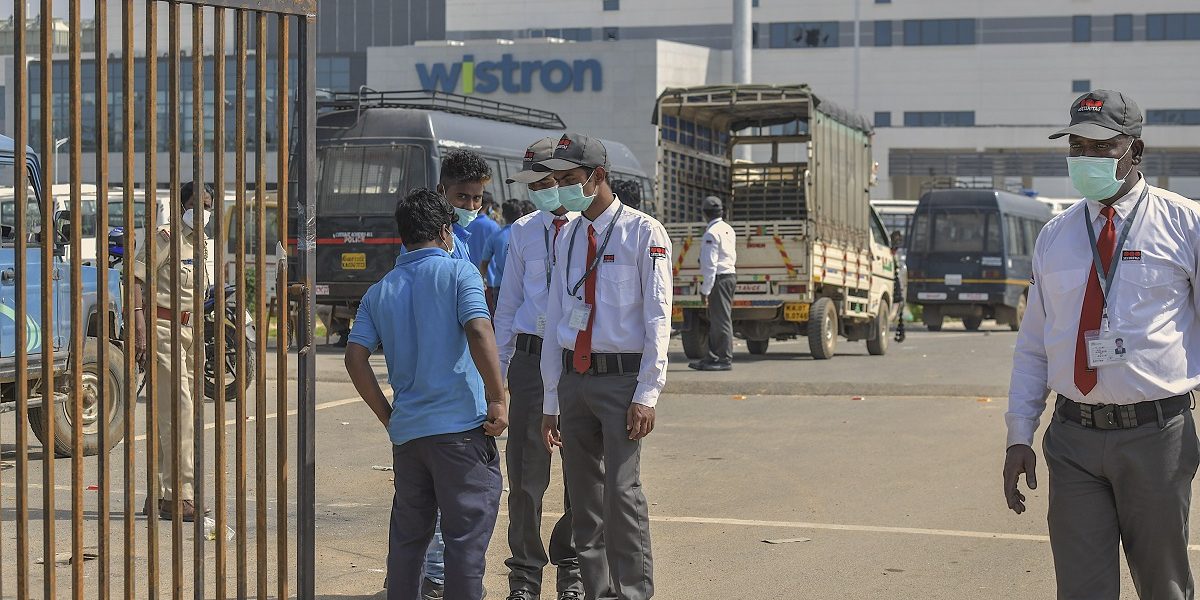 The turmoil at the Wistron factory in Bengaluru is a natural consequence of the government’s decision to further the advantage of global business and weaken protection to our own labour force. The turbulence at the plant, the first in India to manufacture Apple’s iPhone, needs to be looked at from the perspective of the post-developmental state, with the backdrop of the Make in India initiative.

Over the past 30 years, low-end electronics manufacturing has gradually but significantly migrated towards economies in East and South Asia to serve global production networks. Foreign capital gravitates towards these economies due to deepening informality in the labour force, facilitated by the dilution of labour laws and regulations. Attracting global capital supplements the ‘ease of doing business,’ which in India has been ‘eased’ even further by the recently passed three labour codes, also supposedly to augment the Make in India initiative.

According to Make in India’s website, the electronics industry is held as one of its most important pillars within which the Production Linked Incentive scheme aims to attract large investment in mobile phone manufacturing and specified electronics components, including establishing Assembly, Testing, Marketing and Packaging units.

It is exactly in this climate that Wistron’s presence serves Make in India’s ambitions. However, the heads of the state and central government expressing ‘worry’ at the recent events at Wistron, and the consequent harsh counter-actions against the protesting workers, cannot be simplistically interpreted as strong-arm responses to ensure India’s industrial development. Those who express ‘worry’ at the unrest and destruction appear blatantly more concerned about the welfare of foreign capital than the conditions of the domestic worker, a sentiment that is actually expressed within the backdrop of the ‘post-developmental state,’ which India has willingly moved towards.

Such a state defends and furthers the competitive advantage of global business by couching national interests within corporate interests, and thereby negotiates with its workforce to compromise their own welfare and quality of their own employment. Precisely termed by Ravinder Kaur in Brand New Nation, the country is recast as a ‘profitable business enterprise’ or packaged as a ‘commercial brand to attract investment. Aihwa Ong describes in her book Neoliberalism as Exception:

“…governments [provide] corporations an indirect power over the political conditions of citizens in zones that are differentially articulated to global production and financial circuits.”

Hence, governments have reinterpreted their respective development goals as ‘technical projects,’ to be realised through global capital, a trajectory lubricated by aggravating informality in labour, dilution of environmental laws, and crushing of dissent. It is in this setting that the powder-keg imploded with spectacular fireworks in Wistron, a key participant of Make in India.

We are urged at this juncture to revisit Make in India by first asking what really is to be ‘made,’ under what conditions, and who constitute the ‘India’ that the initiative refers to. Are iPhone sweatshops, employing an anguished workforce (made even more desperate by steadily crumbling labour protections), really helping build those pillars of the Make in India initiative?

Are low-end jobs in electronics manufacturing, hastily attracted away from Vietnam (with its new labour laws that facilitated the relocation of production away from China), a euphemism for the Make in India we must concertedly strive for, toeing the policy of competitive federalism?

Is Make in India really stimulating local entrepreneurial skills? What we have ended up with is a sour cocktail of poor employment quality, technological solutionism, and politico-economic rhetoric, masquerading as what the initiative genuinely ought to be. This initiative must not be a policy regime to merely ensure India’s low-value position in the global assembly line. It cannot hurtle down the slope of what an editorial in Economic and Political Weekly, in October 2014, appropriately predicted would be an assured degradation of environment and labour in India.

However, it is not too late to rectify all this. Make in India must assure the full-bodied empowerment of India’s workforce, finely balancing this with the ‘ease of doing business’ (which nevertheless is important). A more contented workforce will bolster a richer and healthier economy, though it may palliate the urban middle-class’s thrills of having an iPhone manufacturing unit in one’s vicinity, and may render governments unable to attract young unemployed labour to work in these dismal factories. It has been a great tragedy to see young workers at a crossroad where their wide-eyed aspirations to the glossy veneer of ‘working for a multinational’ was ultimately met with threats and hounding in the middle of the pandemic for asserting their rights. Make in India must learn to listen to our own workforce about what they need, and our small entrepreneurs about what they can make.

It is unsettling that as we enter the 30th year of the Indian economy’s liberalisation, we still have these uncomfortable issues to grapple and reflect upon. The prime minister and chief minister must indeed be worried, but about the right issues, namely the long term enhancement of quality manufacturing and entrepreneurship, and the betterment of our own workforce. Or else, we must be prepared for more Dickensian factories, and inevitably more virulent worker conflagrations.