Why Traders in Kerala Have Declared 2019 the 'Anti-Hartal Year'

Traders' groups have said that by calling frequent strikes, political parties are damaging the state's economy. 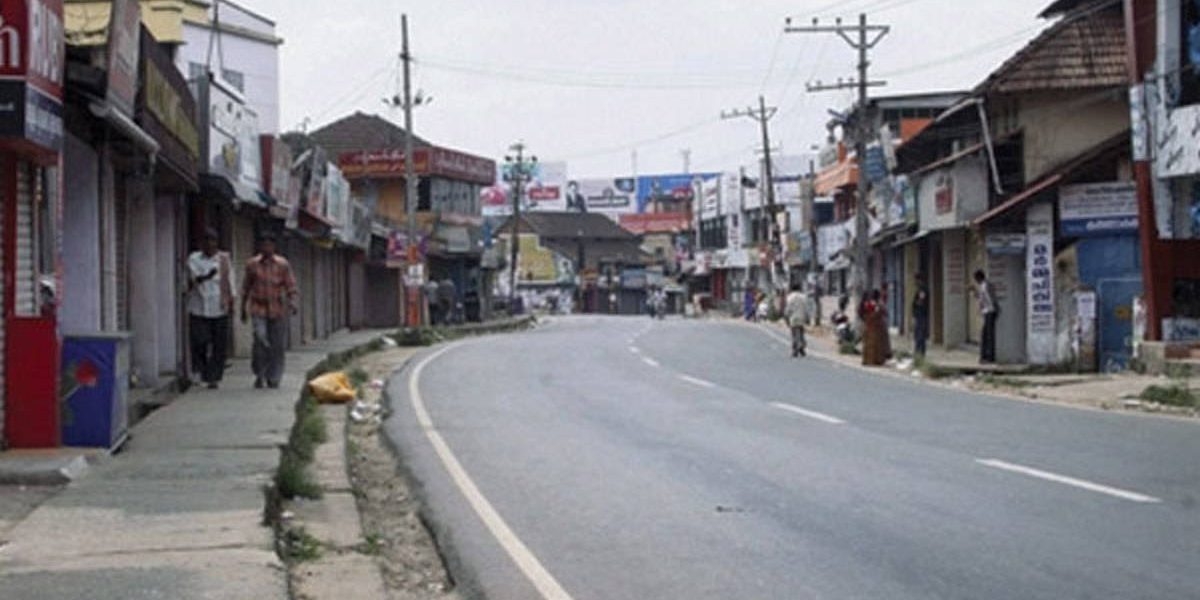 Representative image of a strike in Kerala. Credit: PTI/Files

Kochi: On Thursday (December 20), over 35 trade organisations in Kerala came together to announce that 2019 will be ‘anti-hartal year’. The Cochin Chamber of Commerce believes that the frequency of hartals – otherwise known as bandhs – in Kerala is cutting Rs 7,200 crore from the state’s GDP.

“There were 97 hartals last year. The traders, hoteliers, bus owners and other establishments were facing a loss of crores of rupees due to such flash hartals,” Kerala Vyapari Vyavasayi Ekopana Samiti state president T. Nasarudheen told PTI. “”We want all the political parties to co-operate with us. Even a minister had said the political parties need to find an alternative to such flash strike calls.”

On December 14, the Bharatiya Janata Party (BJP) called for a state-wide strike in Kerala, to mourn the death of an activist who allegedly self-immolated at the Sabarimala protest site in Thiruvananthapuram.

Although the commissioner of police said that the deceased had set himself on fire for personal reasons – not because of the Sabarimala issue – the BJP state leadership announced a protest hartal.

According to anti-hartal activists, December 14 was the 97th strike in the state this year, and the sixth shutdown the party has forced in just three months because of the Sabarimala row.

V. Venugopal, the president of Cochin Chamber of Commerce, said that if a hartal is considered ‘100% successful’, it takes away Rs 900 crore from the state’s overall Rs 7.76 lakh crore GDP.

“Hundred percent successful means the entire state comes to a standstill,” Venugopal said. “State-run public transport system and private vehicles are forced to stop operating in fear of hooliganism. Shops, schools and universities are forced to remain closed and exams are postponed.”

The ripple effects continue through the economy – through delays in shipments and transportation, supply chain interruption, and damage to inventory.

“Even with local hartals, transportation through that area is impacted, with knockdown effects on other parts of the state,” Venugopal said.

Some leaders, however, are ready to free Kerala from the habit. Shashi Tharoor, Congress MP from Thiruvananthapuram, told The Wire that he has been a consistent opponent of hartals.

“When I entered politics, I pledged to oppose all hartals, even if my own party called one,” he said. “While I support the right of workers to strike, I consider it a deeply anti-social act to compel others to do so. Hartals have kept students from exams, patients from hospitals and cost crores in lost economic activity. No one has the right to coerce others into giving up their work or other commitments, whatever the cause.”

“I have kept my office and home office open and worked on all hartal days, on principle. I would be in favour of an all-party consensus against hartals,” Tharoor added. “It surprises me that a people as hard-working and industrious abroad as Keralites are so willing to enjoy enforced idleness at home.”

A bandh by any other name

In 1997, a full bench of the Kerala high court banned bandhs. The Supreme Court shot down the then Left government’s petition to get the order reversed.

Bandhs were promptly renamed ‘hartals’ to get around the law.

In 2000, the Kerala high court ruled that the enforcement of a hartal by “force, intimidation – physical or mental – and coercion” was unconstitutional. This has not discouraged Kerala’s politicians.

In 2015, Venugopal said, “The previous the Congress-led government introduced the Hartal Regulation Bill. The Bill was sent to a Select Committee for consideration but has not seen the light of day since then.”

“Hartals announced by the BJP in the state are unnecessary and create loss for the state’s revenue and inconvenience for the people,” he said. “Workers’ strike cannot be seen like that. They are forced to strike for their survival.”

Hinting at the upcoming bank employees’ strike on December 21 and 26, the union leader said that such strikes are necessary when the government is privatising and liquidating public sector units, putting workers’ futures at risk.

The tourism sector, a mainstay of the Kerala economy, is bleeding from the impact of frequent hartals.

According to Venugopal, some 50,000 domestic and foreign tourists were trapped indoors due to the state-wide shutdown on December 15.

In Kochi, “Around 2,500 foreign tourists – mostly from the UK and Germany – who arrived by a chartered flight and four cruise ships were left in the lurch when Kochi shut down.”

As part of the announcement of the ‘anti-hartal year’, the Kerala Tourism Task Force said the tourism industry will vehemently protest shutdowns, PTI reported.

It is in the informal sector, however, that workers are hurt most.

In general, wages in the formal economy are not cut due to hartal absences; firms often ask for work on weekends or extended working hours to make up for the lost time. Informal workers are forced to stay at home, and lose their day’s income.

Rahman M., a fish seller in Kothamangalam, a central Travancore town, said that every hartal is a nightmare for him.

“People like us, who depend on daily business, who do business on the streets, are the ones who are the most affected,” he said. “I need Rs 1,000 every day for survival. My parents need medicines worth Rs 600 daily. With the remaining Rs 400, my family survives. It’s stressful and painful when we lose even one day’s business.”