Mahesh Vyas, CEO and MD of the Centre for Monitoring the Indian Economy, says nearly 20 million people are no longer looking for jobs but have opted out. 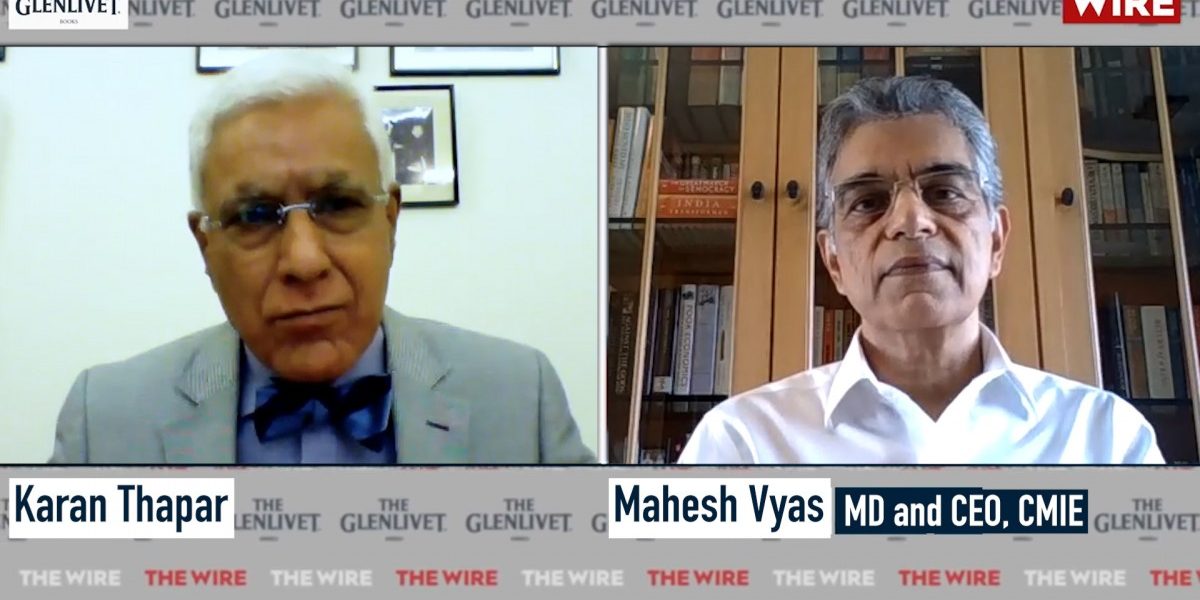 In an interview that puts in perspective the government’s belief that green shoots such as GST collection, export growth and automobile sales show the economy is recovering, an economist who is considered an expert on employment has said tens of millions of good quality salaried jobs were lost in the lockdown and are unlikely to be retrieved easily.

Mahesh Vyas, the CEO and MD of the Centre for Monitoring the Indian Economy, says the unemployment rate is misleading because the labour participation rate is also falling and that suggests perhaps as many as 20 million people have lost heart and stopped looking for jobs. They’ve opted out.

He also says that for the last 4-5 years employment has been stagnant because the economy has not created additional jobs. The total employment count has hovered around 403 million. As he put it, India has either been experiencing jobless growth or growth with jobs declining.

The second worst affected category of salaried employees are industrial workers. 26% of their jobs have been lost. This decline is most apparent in small industrial units because the MSME sector was badly affected by the lockdown.

However, there’s one category of salaried jobs that have not at all been affected by the lockdown and that is white-collar clerical employees i.e. secretaries and office clerks. This is because most clerical employees work with large companies or large PSUs. Because they have survived and retained their staff these jobs are unaffected.

Vyas told The Wire that the crisis that has hit salaried employees puts in perspective the overall big picture of the lockdown’s impact on employment. In 2019-20, India had a total employment count of 403 million. Of this 121 million jobs were initially lost in April. Thereafter 14 million jobs were added in farming and seven million in small businesses. Today the total jobs lost is 5.8 million. So in terms of the big picture employment looks as if it’s virtually back to pre-COVID-19 and pre-lockdown levels. Its only when you look at the decimation that has affected salaried employees that a different picture emerges.

Speaking about the unemployment rate, which in September was 6.7% and a lot better than the 8.4% level of August or the 7.76% level of February i.e. before the pandemic, Vyas said this is not necessarily good news because it needs to be seen alongside the falling labour participation rate and the falling employment rate.

He said that a falling labour participation rate means that fewer people are looking for jobs which suggests that they have given up and are disheartened. In other words, they have opted out.

So though the unemployment rate has come down to 6.7% the labour participation rate has fallen very sharply. It was 43% in 2019-20. It is 40.7% today. That means 20 million people are no longer looking for jobs. They have opted out.

Vyas added that India needs around 7-8 million jobs a year to cater for annual additions to the labour market (some others put the figure at around 9 million) but these jobs are simply not being created. He said for the last 4-5 years that his organisation, the CMIE, has been monitoring the economy employment has stayed stagnant. He said this means the situation is going to get worse because the unemployment rate will either grow or remain uncomfortably high with the likelihood that as people get disillusioned and disheartened the labour participation rate will remain low or even fall further.

Vyas also drew attention to India’s very low labour participation rate. It’s under 41% whilst the global average is around 66%. The explanation he said is simple. We simply do not have enough jobs.

India’s very low female labour participation rate is also worth noting, he said. Although government statistics put it at 23%, which is a fall of 8% between 2011-12 and 2017-18, his organisation, the Centre for Monitoring the Indian Economy, puts it as just 11%. In comparison, the female LPR in Bangladesh is 30%, in Indonesia 39% and Thailand 45%.

He said that India will never achieve the hoped-for demographic dividend unless the female labour participation rate can be very considerably boosted. If that doesn’t happen the dividend could easily become a disaster.

Vyas illustrated his point by saying that 355 million men have jobs in India compared to just 50 million women. If the latter figure could be raised to 200 million, with each person drawing a salary of 10,000 a month, it would give a huge boost to GDP, demand and productivity.

Speaking about the government’s Atmanirbhar policy, Vyas told The Wire that it will not help save jobs and it will not create jobs. He said it was launched far too late and, secondly, it didn’t put enough money into bailing out people. The loans it offered MSMEs were not attractive because MSMEs were not prepared in the present circumstances to take on debt.

Speaking about the new labour laws, he said that whilst they are welcome they will not have a big impact on creating the additional employment India needs. This is because there are many other hurdles to creating jobs which remain to be tackled. For instance, he asked: “How much does India value entrepreneurship? How much does it want to have large companies?”

He added the government must realise “ease of doing business is not just rank but a question of promoting entrepreneurship”. It’s only when that happens that jobs will be created in the numbers that are needed, first to provide for the 8 million young Indians who enter the labour market each year and then, beyond that, to boost the labour participation rate from under 41% close to the global average of 66%.

Please see the full interview for specific details and a fuller understanding of Mahesh Vyas’s points.