Unpaid for 3 Months, No Safety Gear: 19,000 Ambulance Staff Stop Working in UP

The ambulance workers are not employed directly by the state government, but by a private contractor. 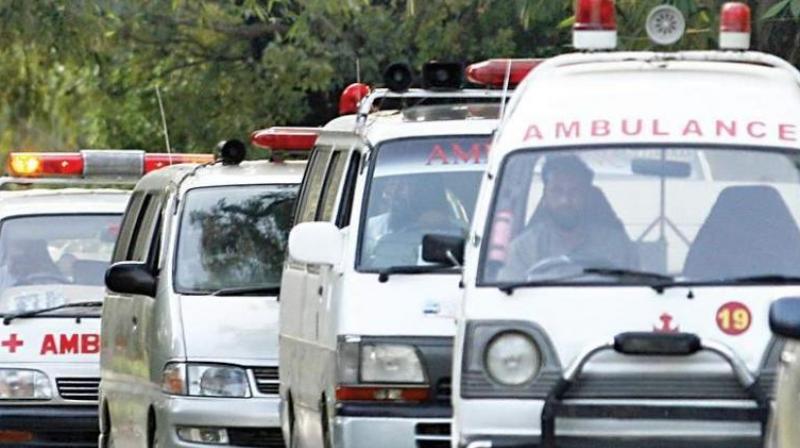 Meerut: The Uttar Pradesh ambulance workers’ association halted work on Tuesday as they have not been paid their wages since January and have not been provided safety gear – suits and masks – to deal with the COVID-19 outbreak.

The association has said that all 19,221 workers associated with it have stopped operating ambulances in all 75 districts of UP.

“There is no salary, no masks, no sanitisers, no insurance for us. We are not going to put our lives at risk like this. We have been talking to the administration, the contractor and the government. But no one has done anything to solve the problem,” Brijesh Kumar, general secretary of the ambulance worker’s union Jeevandayni Swasthya Vibhag, told The Wire.

The employees service the 102 and 108 emergency ambulance services provided by the government of UP. However, the workers are not employed by the state. Instead, they are contract workers contracted by a private contractor – GVK Emergency Management and Research Institute (GVK EMRI).

“The workers earn between Rs 10,000 and Rs 20,000 per month. But the company has not paid since January. We have been asking them to clear the payment every day and they keep saying that it will come tomorrow, but it never comes. We even had a meeting with the UP health minister Jai Pratap Singh, who said that you are private employees and you should talk to your company not me. That is when we decided to stop work,” said Kumar.

This gentleman , part of the emergency 102 , 108 ambulance services in @UPGovt, says his association has decided to halt work over lack of basic safety equipment and no salaries for 2 months . In UP , the services are run by a private company – GVK on contract with govt ….. pic.twitter.com/orWM55Z98t

Each district has earmarked a few ambulances to deal only with COVID-19 patients and according to ambulance workers in various parts of the state, those have been provided with the safety gear.

“There are five ambulances which are only for corona patients and the workers in those ambulances have been provided the safety gear. But the rest have not been given anything – not even a mask. When we go to pick up a patient, we don’t know whether the patient has corona or not. We should also be given the safety kits, otherwise we are at risk,” said Subhash Singh, an ambulance worker in Modinagar.

In a letter to GVK EMRI, the workers association has asked for the salaries to be paid immediately and safety equipment to be provided. “We only begin work after that happens. If the company is not going to grant us our demands, we are not going to work,” said Kumar.

Several attempts to reach top officials of GVK EMRI has so far yielded no response.

Meanwhile, hospitals are beginning to worry. In Meerut, which has reported 19 infected people and is among the 10 ‘hotspots’ of the infection in the country, the administration is worried about the strike.

“We have tried to convince some of the drivers, who have agreed to work for today. We are dealing with a very difficult situation in Meerut, where we have to track lakhs of people and have to admit hundreds who are symptomatic. We can’t do that without ambulance staff. So I hope the company is able to clear the dues today, otherwise this could make the crisis much worse,” said an official in the Meerut administration.