The aggressive changes to the terms of employment has provoked the trade unions to mobilise. 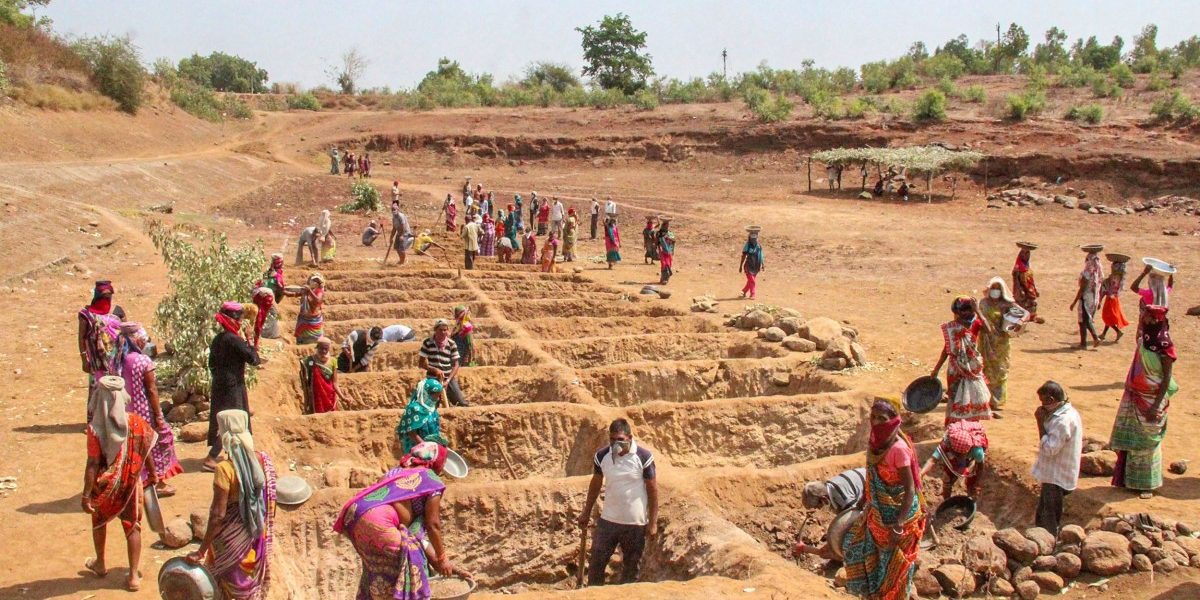 The migrant worker is the link between industry and agriculture. His mobility is the measure of the interconnections between the urban and the rural in India. The number of migrants is proportionately smaller than the far larger numbers of men, women and children engaged in agriculture, as street vendors, as members of the work force keeping production running in the organised and unorganised sectors, irrespective of whether these are registered or remain unregistered. But the migrant is a symbol of all that has gone wrong with the economy as the unplanned, uncoordinated and hastily announced lockdown enters yet another phase.

Not only have workers become temporarily jobless, but they have been stranded and become destitute, deprived of basic human dignity, dependent on charity and migrants among them compelled to walk home as hopes of finding transport have receded. Migrants from villages across India who usually returned to harvest the modest crops grown on family plots, rented, leased or owned, could not come back in time, which meant that they took a double hit.

The lockdown has been an economic disaster for India’s working class, a bare 7-8% of whom are in regular employment in the organised sector and the rest of twhom are workers in the unorganised or informal sector. Agriculture has taken a greater hit, with plummeting prices, no income, rising expenditure and no hope.

The May 22 countrywide protests are “preparations for a larger agitation” that could lead to confrontation and conflict, Tapan Sen of the Centre of Indian Trade Unions said. India’s working class has been “pushed against the wall,” Amarjeet Kaur of the Indian Trade Union Congress felt.

On May 27, unionised agricultural labour, small and marginal farmers, including tenants, share croppers, land owners recently forced to sell out, all of them will come out in protests in villages, at block level offices across India. The call by the All India Kisan Sangarsh Coordination Committee, a joint platform of more than 200 peasant organisations, is to begin the process of raising demands to meet the immediate crisis in agriculture. All India Kisan Sabha leader Hannan Mollah was clear that “We cannot sit and raise demands through social media. We have to come out in public places, disregarding the consequences for violating lock down ban on public meetings.”

Also read: The Invisible Ghosts Who Walk Will Haunt India for Years to Come

By May 14, the central trade unions had reached the tipping point; from small, limited quiet and local protests, the central trade unions including Bharat Mazdoor Sangh, affiliated to the Bharatiya Janata Party were clear that the Union government had no intention of announcing a relief package to ease the distress and destitution of workers, in industry, in services, in agriculture. On May 14, the announcement for a mass mobilisation “maintaining physical distancing” as Kaur explained, had been made.

Trade unions had not been loud enough or visible as the distress of the migrants exploded across India. Trade union efforts to mitigate the distress were low-key. The Centre of Indian Trade Unions collected and distributed relief to about 20 lakh workers. Other trade unions have been doing their bit, including the National Hawkers Federation, by distributing relief packets to their members. But nothing that the trade unions, as well as civil society and religious charities and organisations, could do was enough.

The hope that the Union government would announce a slew of measures to relieve the distress died on May 14. Kaur said what was happening was a repeat of previous manmade disasters when “abundance of food can cause hunger.” India’s food grain surplus in 2020 is, according to Food Corporation of India and government agencies is “higher than the buffer and strategic norms.” India has 50 million tonne rice and 27.5 million tonne wheat, as on March 1. The National Agricultural Cooperative Federation of India currently has 2.5-2.8 million tonne of pulses – chana, tur, urad and moong and another 0.7 million tonne groundnut and mustard, they say. The grains and pulses for the central pool are for public distribution and other welfare schemes.

Using the “biological crisis,” labour laws have been kept in abeyance, drastically changing the terms of employment to produce a “paradigm shift,” where working hours, wages, over time, occupational health and safety have been jettisoned and under cover of a disaster to be managed. Even the right to protest and dispute the changes that the Union government and several of the state governments have initiated have been suspended; Madhya Pradesh and Uttar Pradesh have issued ordinances, slyly stripping workers of this basic right, guaranteed by the Constitution and legislation for three years. The fundamental right to survive has been stripped off human dignity. Nowhere in the world has economic growth happened by stripping labour of its basic rights.

The aggressive changes to the terms of employment has provoked the trade unions to mobilise to act collectively to demand some immediate relief and benefits for the millions of affected workers in the organised and unorganised sectors, those working in registered and unregistered units as well as the millions who are self employed as street vendors, rickshaw pullers and drivers, auto rickshaw drivers, cab men and service providers in the hospitality and beauty-grooming sectors.

Unionised workers have been asked to come out on May 22 as part of a nationwide organised protest to fight back attempts of draconian changes in labour laws. The joint platform of Central Trade Unions on May 14 decided that enough was enough of playing by the lockdown rules of the Narendra Modi-led Bharatiya Janata Party government at the Centre.

Also read: Far From Helping Workers, the Adityanath Govt Is Bent on Snatching Away Their Rights

From small, local, contained and quiet protests that have been organised from about mid-April, the trade unions have decided that the May 22 protests will be bigger, louder and in defiance of the lockdown rules against public gathering. Outside the 20% factories currently operating, in the districts where industrial units are located, workers of all the central trade unions will come out and visibly protest against the changes to the labour laws.

The trade unions have demanded a minimum cash transfer of Rs 7,500 a month for the next five to six months to tide over the crisis for all non-income taxpayers so that they can subsist. Universalisation of ration so that any person in need of subsidised cereal, pulses or sugar can access it, increase in the money directly transferred to Jan Dhan accounts and repeal of ordinances that annul hard fought rights of labour are part of the demands that trade unions are raising and mobilising for on May 22.

The problems for India’s working class are piling up as legal protection is being dismantled on the one hand and the terms of employment are worsening on the other. The failure of governance in bringing the contract, casual, daily rated workers under a safety net in the work place and as a society is all too evident. Of the 93% working in the unorganised sector, 30% are regularly employed, the remaining 70% are on contracts. Of these, 71% had no written contracts, 54.2% were not eligible for paid leave and 49.6% had no social security benefit.

The entitlements of the masses has been snatched away and the small and powerful ranks of the employers have been empowered according to Tapan Sen of CITU. The May 22 protest, including the hunger strike at Raj Ghat, is to create visibility and initiate the mobilisation for direct action. The more the government steps back from protecting labour through laws and rules, the more labour will have to go in for open defiance.

The annulment of labour laws in several states and the failure of the Union government to prevent this has provoked the trade unions to complain to the International Labour Organisation, the World Federation of Trade Unions and the International Trade Union Congress. In the letter to ILO, central trade unions declared that they “consider these moves as an inhuman crime and brutality on the working people.”

Watch: UP Labour Law Ordinance: ‘An Attempt at Labour Exploitation, India Pushed Back to 19th Century’

The fight back by the trade unions against “the bulldozing” by the authoritarian government and its disregard for democratic norms is nowhere near adequate. Since the 1990’s trade union strength in terms of their effectiveness on protecting workers rights by strengthening laws, institutions and responses from government has not grown to match the speed at which changes have happened in the economy and the terms of employment. That 93% of India’s force is engaged in the unorganised sector is a measure of the new economic order.

In agriculture, farmers suicides on the one hand, the rising cost of inputs and the squeezing out of small farm owners by land consolidation, land banks for industry and urbanisation has made things worse for families dependent on the land, as labour, as sharecroppers, as tenants. The slow build up of resistance in the last few years, with farmers marches across India that galvanised the cities into sitting up and taking notice will have to be accelerated to confront the impact of the Corona pandemic.

The increase in allocations under MNERGA is just a palliative; it is not a solution. Migrants left villages because there was no work. The return of these families will trigger a reaction and is not as yet known.

The uncertainty has made the migrant desperate to return to the village. Whether that desperation creates a countervailing pressure on the government is uncharted territory.