Fearing they might lose some legislative protections, workers are suspicious of the amalgamation of labour laws into broader codes. 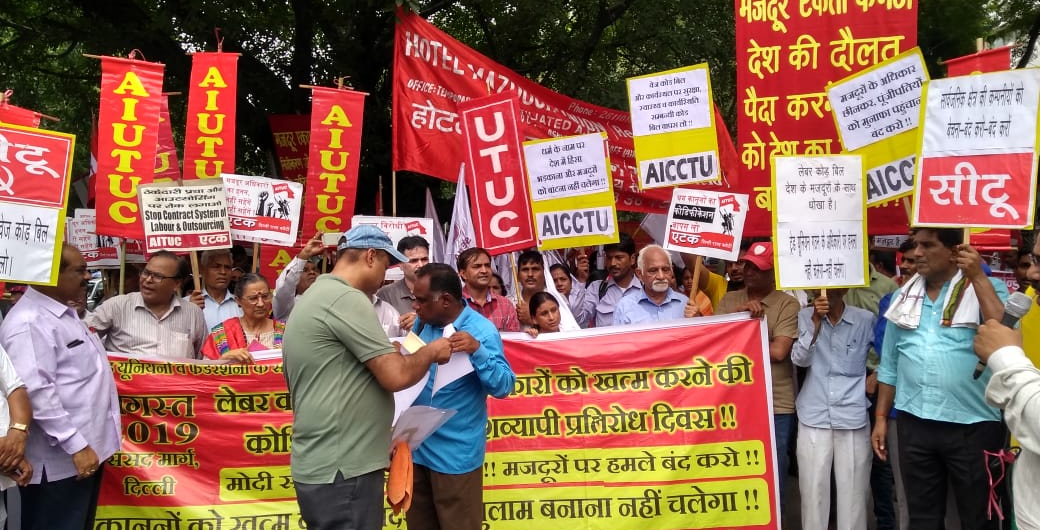 The Code on Wages, 2019 was passed by both houses of the parliament last month and the Occupational Safety, Health and Working Conditions Code, 2019 has already been introduced in the Lok Sabha and will be up for discussion soon.

While the government claims that the codes will simplify and rationalise the web of labour laws for ‘ease of compliance’ and ease of doing business, trade unions allege a pro-employer bias in the codes. 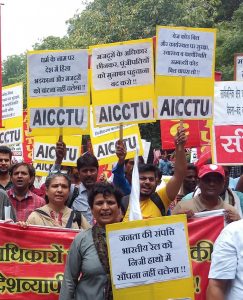 The codes also seek to widen legislative protection to all workers across sectors (currently only those working in occupations mentioned in scheduled employment lists are covered) and reduce litigation by removing the ‘multiplicity of definitions and authorities’.

Pointing out ‘flaws’ in the Code on Wages Bill, trade unions argue that apprentices have been excluded from the definition of employees while they are considered employees in existing labour laws.

Minimum wages in India are the lowest in the world when compared to other large economies.

One of the major points of contention between the government and these unions is the replacement of labour inspector with ‘Inspector-cum-Facilitator’. This, the unions say, has been done to make the authority ‘toothless’. Even in established cases of violations of the code, prosecution won’t be the first response. According to section 54 (3) of the bill, inspector-cum-facilitators, “shall, before initiation of prosecution proceeding for the offences under the said clause or sub-section, give an opportunity to the employer to comply with the provisions of this Code”.

“As of now the Payment of Wages Act, 1936, Minimum Wages Act, 1948 and the Equal Remuneration Act, 1976 provide for fine and/or imprisonment as penalty. However, under the proposed code bill the penalty of imprisonment is done away with, at least in the first instance of violation,” says a statement from All India Central Council of Trade Unions (AICCTU).

Unions also claim that an exception in the code would allow employers to force workers to work beyond fixed working hours. While section 13 (1) (a) of the bill empowers the government to fix the number of hours of work that constitute a normal work day, section 13 (2) allows exception to this in cases of “emergency”, “preparatory or complementary work”, “intermittent” work, among others. Unions fear that workers’ 8-hour work day could be legally prolonged by misuse of this clause.

The industry has been demanding more flexible laws for recruitment of workers, arguing that strict labour laws are not letting businesses scale up.

Unions also allege that these codes have been made on the demand of the industry and that in the garb of ease of doing business, workers’ rights are being tampered with.

Another issue raised by unions is that the 44 labour laws were a result of prolonged struggles of workers of various sectors demanding greater emphasis on the specificities of different sectors. A uniform legislation should not be used to govern such a wide variety of occupations, they argue. The Occupational Safety, Health and Working Conditions Code, 2019 combines 13 laws related to working conditions of workers of various sectors like sales promotion, mines, bidi, construction, journalists and newspaper employees, migrant workers, contract workers etc.

Various other issues with the two bills were raised in the protest demonstration.

“On the one hand, Modi government is rapidly dismantling labour laws and on the other it is trying to divide the toiling masses. Labour laws are being lynched inside parliament, and minorities outside it. We will not let this happen,” said Rajesh Chopra, joint secretary of AICCTU Delhi, while addressing the gathering.

The BMS has, however, welcomed the Wage Code Bill. “It’s a historic moment for the labour movement. The unorganised and informal sector has finally been covered to ensure universalisation of labour laws. No worker has been left behind,” Virjesh Upadhyay, general secretary of BMS, told The Wire.

The joint statement of the other 12 trade unions contests this claim of universalisation. The yet to be passed The Occupational Safety, Health and Working Conditions Code, 2019 is applicable to establishments that employ ten or more workers but according to various estimates, most of India’s workforce in employed in establishments with fewer than 10 workers.

“Nearly three-fourths of employment is in enterprises with fewer than 10 workers,” former NITI Aayog vice-chairman Arvind Panagariya told Hindustan Times last year. While the uniform figure of 10 workers irrespective of sectors is an improvement on previous laws, unions say it leaves out most of the workforce employed in small shops or establishments which is most vulnerable to workplace related accidents and health issues.

The protest has garnered international support as International Trade Union Confederation (ITUC), world’s largest trade union federation, has come out with a statement in solidarity with Indian workers who are resisting the labour codes.

“We are side-by-side with our affiliates in India who are standing up for workers’ rights in every workplace, a national minimum wage that people can actually live on, and a new social contract for every worker,” Sharan Burrow, ITUC general secretary, said.

“The world is watching whether Modi’s government can override basic principles of social justice and decent work, so the struggle of our Indian sisters and brothers is our struggle too,” she added.