Many labourers from Odisha migrate to the brick kilns of Telangana, where the contractors and kiln owners exploit the desperation of the migrants – and after months of gruelling work, the workers can end up in debt.

Migrants from Kurumpuri panchayat of Nuapada district at the kiln in Annaram village of Sangareddy district. They were happy to hear that I too was from their district. One of the older men said, “After a long time I have met someone who speaks Odia. I am very happy to see you!” Credit: Purusottam Thakur/PARI.

Baidehi and her husband have been working at a brick kiln in Domandugu village of Gummadidala block in Telangana’s Sangareddy district for over a decade. They come here every year from Kurumpuri panchayat of Nuapada district. “We took an advance of Rs 20,000 from the seth, ” Baidehi says. Additionally, the kiln owner pays them Rs 60 a day as food allowance. “Please ask the seth to pay us at least Rs 80 so that we can sleep only half-hungry.”

I met Baidehi’s family in 2017, when I revisited the brick kilns of Telangana, in Rangreddy, Sangareddy and Yadadri Bhuvanagiri districts.

Many years before this, when researching and reporting on migration from Kalahandi (now sub-divided into Nuapada district) and adjoining Bolangir (or Balangir, now sub-divided into Sonepur district, which is now called Subarnapur) in the 1990s, I had come across four kinds of migration: Baidehi (foreground), her husband and relatives have worked at a kiln in Telengana for over a decade. This time, they brought one child along and left the other two behind because they are in school. Image credit: Purusottam Thakur/PARI.

The migration had started in the mid-1960s, when there was a famine-like situation in Kalahandi and Balangir. In the late ’80s and early ’90s, people moved because of drought, crop loss, and debt. At the brick kilns, the kiln owners, seeing the desperation of the Odia migrants, would pay them less than local labourers. This exploitation continues – a husband, wife, and one other adult worker are considered one unit, and each unit gets Rs 20,000 to Rs. 80,000 as advance payment. Banita Chinda and her husband Netra have been working for three years at a kiln in Kongara Kalan village of Rangareddy district.They’re from Sargimunda, a hamlet of Kirejhola village in Boden block of Nuapada district and belong to the Chukotia-Bhunjia tribal group. They are here with their daughters Pinki, 7, Laxmi, 5, and seven-month-old Kalyani. “Our sardar [contractor] and the kiln owner will sit together and fix our wage rate.” Netra said.“We have taken 80,000 rupees as advance for three adults – me, my wife, and my cousin. With 10,000 we bought gold, deposited 17,000 in the bank, and will use the rest for our consumption” . Credit: Purusottam Thakur/PARI

In return, after a local festival in Odisha that follows the harvest in October-November, the families start preparing to migrate. By December- January, contractors take the workers to the kilns. There they work till around June, and by the start of the monsoon return to their villages, where they work as farm labourers or on small plots of their own land.

The advance the workers take is used to repay their previous debts, or for marriages, to purchase bullocks, pay medical bills, and for other expenses. At the kiln, the Rs 60 a day as food allowance for each unit remains the same regardless of the number of family members who have migrated together. At the end of the season, this amounts plus the advance taken in calculated against the number of bricks made. 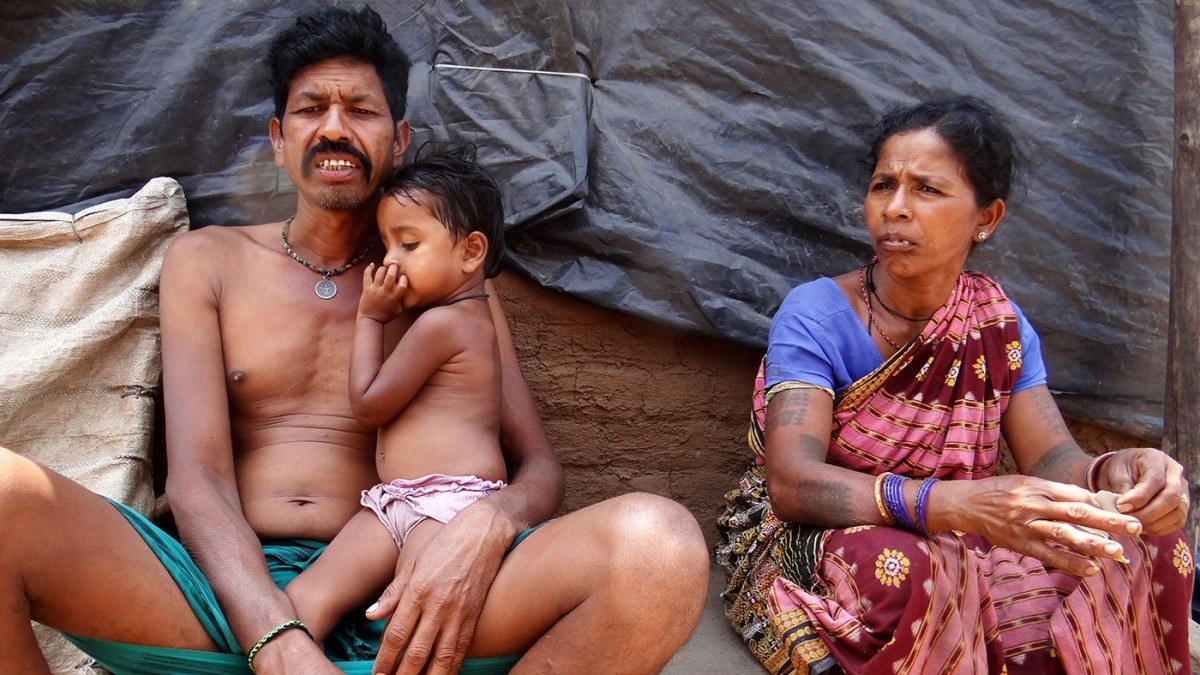 Remati Dharua and her husband Kailash are farmers from Pandrijor village in Belpara block of Balangir district. I met them in Annaram village of Sangareddy district. They had lost their crop due to drought and migrated to the kiln with their daughter, son-in-law, granddaughter (centre) and youngest son Himanshu, who has studied till Class 10 and was working here to meet the costs of college . Credit: Purusottam Thakur/PARI.

Each three-member unit earns Rs 220 to Rs 350 for every 1,000 bricks. This amount depends on negotiations with the kiln owner or contractor. A group of workers can make between 10,000 to 400,000 bricks in around five months, depending on the number of extra helping hands available – physically fit family members other than the three-workers unit. That’s a payment range of Rs 20,000 to a rare maximum of Rs 140,000. After the Rs 60 daily allowance and the advance is deducted, some workers end up in debt at the end of the gruelling kiln season.

Purusottam Thakur is a 2015 PARI Fellow, and a freelance journalist, photographer and documentary filmmaker who reports from Chhattisgarh and Odisha. He also works for the Azim Premji Foundation.

This article was originally published in the People’s Archive of Rural India on November 2, 2018.