Despite the threat of legal action from the state government, MSRTC employees, numbering upto 96,000, have made it clear that they will not call off the strike until their demands are met.

He left behind his wife, his parents and grandparents – all dependent on his earnings as a Maharashtra State Road Transport Corporation (MSRTC) employee posted at the Jalgaon district bus depot. In a half-page suicide note that he left behind, Choudhary blamed the Uddhav Thackeray-led Maharashtra government for “letting the MSRTC employees down”.

“I am tired of the meagre and the erratic disbursement of payment by the MSRTC. Only the MSRTC and Thackeray government elected by Marathi manoos (people) is to be blamed for my death,” he wrote in the note. Choudhary’s last wish was that the provident fund accumulated in his 10 years of service be paid to his 25-year-old wife, Aishwarya. 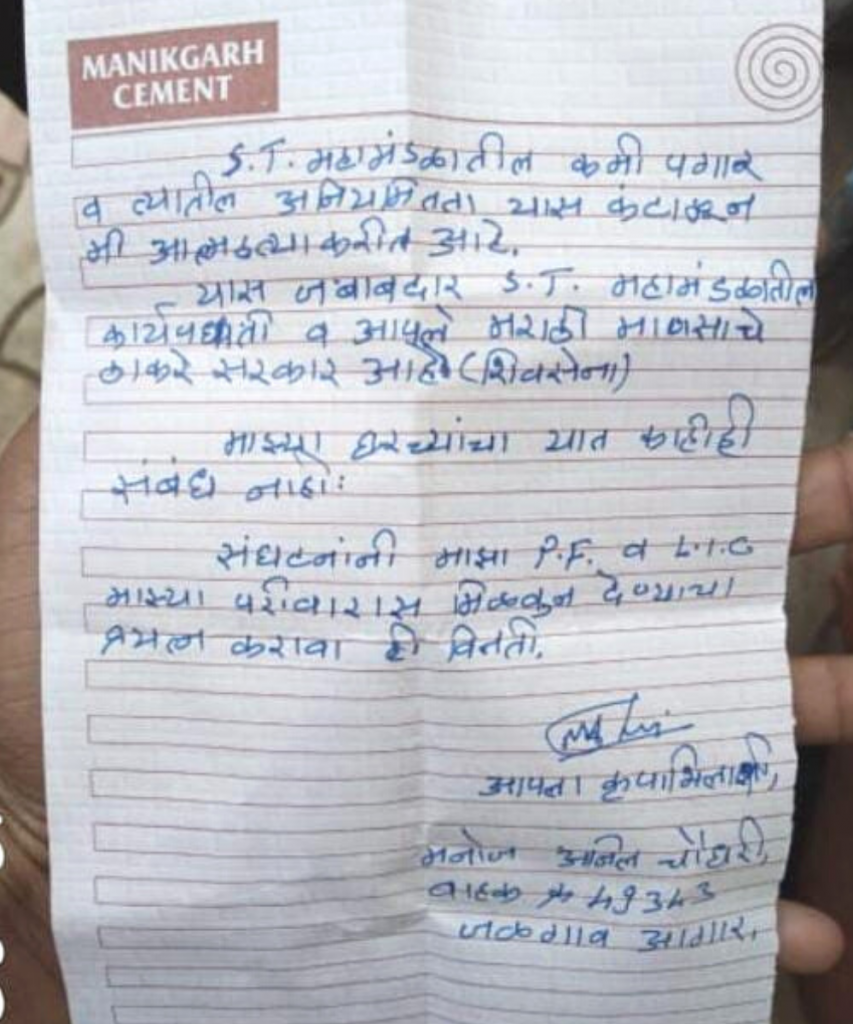 Aishwarya recalls the final few months before her husband’s death as the most difficult of her life. “My husband tried everything he could to stay afloat. But with his meagre Rs 14,000 salary per month, which was also paid after a delay of three to four months, it became impossible for him to take care of the family,” she says. Death, she says, was the only escape left for her husband.

Aishwarya, a graduate, has since been trying to get herself employed in the MSRTC. But the process, like every other decision in the corporation, is delayed. The delay meant that the family had to abruptly stop the medical treatments of the old and ailing in the family and start taking loans from friends and relatives.

Choudhary’s death, by suicide, was not the first one. Since COVID-19 hit India in early 2020, over 96,000 employees of the MSRTC, handling a fleet of over 17,000 buses, have been suffering immensely. As a result, 37 employees have died by suicide since March 2020.

The employees’ union, which has been on a complete strike for over 20 days, has compiled data of persons who died over the past two years. The reasons cited in each of those cases were insurmountable debts, lack of proper pay and the state government’s failure to pay heed to their desperate demands. Manoj Choudhary and his wife Aishwarya. Photo: By arrangement.

‘No question of compromise’

The Wire spoke to several employees of MSRTC and their families to understand their reason for participating in the protest that has been on for close to 20 days, bringing public transport to a complete standstill. Each one of them blames the state government for not doing enough to save them and their families. 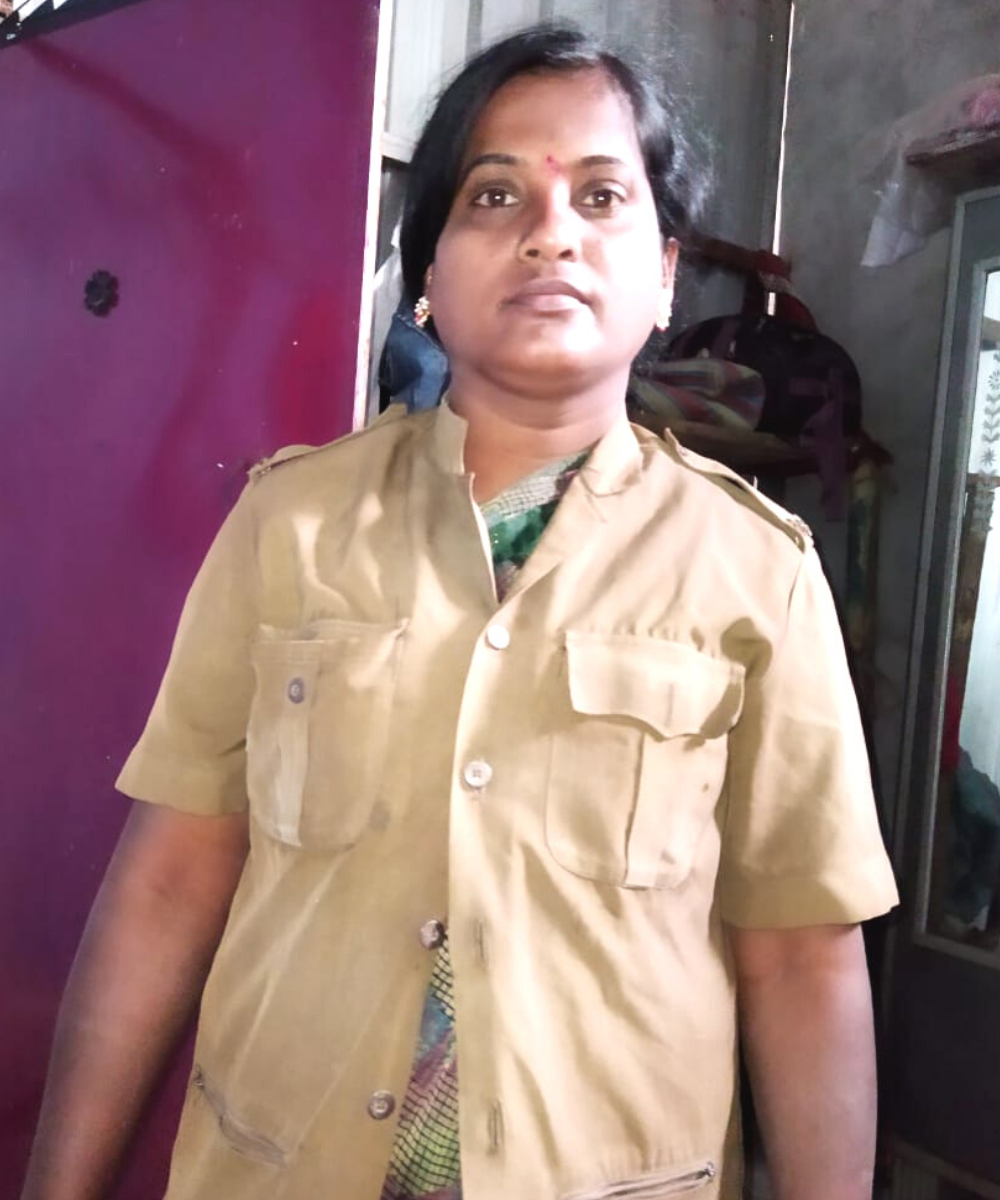 For 36-year-old Prabhavati Swami, a bus conductor in Latur, the delay in payment has led to starvation and denial of medical help to her seriously ill son and elderly in-laws.

Her son, born with a congenital kidney ailment, died two years ago after she failed to continue with the treatment. Swami, who earns Rs 19,000 per month, had to take a loan of Rs 5 lakh over the years to pay for her child’s treatment.

Swami says if the state had been cognisant of their demands and had swiftly decided on the merger of the loss-making corporation with the state government, she could have availed herself of facilities that are available to an average government employee. In such a case, she would have drawn at least double the existing salary, as the benefits under the Seventh Pay Commission would have been applicable to her, she adds.

Two of the 24 employee unions called for a state-wide strike on October 27. The strike, which began at a few depots initially, soon spread across all 250 bus depots. Close to 1,500 employees participating in the strike have been suspended from duty. Criminal action has also been initiated against a few.

Among the many demands, the unions have claimed that the one on the merger is the most important. “Unless the employees are treated on par with state government employees, our strike won’t stop,” says Jagnarayan Gupta, an acting president of the Sangharsh ST Kamgar Union, one of the unions leading the agitation.

The state transport minister Anil Parab has agreed on a few, but the merger remains out of bounds. On October 25, Parab had increased the dearness allowance by 5% – taking it to 17% from the existing 12%. The demand, however, was for 28%, which state government employees receive.

When the agitation intensified, the MSRTC approached the labour court which declared the strike “illegal” and ordered the protesting MSRTC employees to return to work. When the unions refused to budge, the MSRTC then had to approach the Bombay high court against the Sangharsh ST Kamgar Union. The high court too directed all employees to discontinue the strike and ensure that passengers planning travel during Diwali were not inconvenienced.

When things did not change, the state government finally agreed to set up a committee and appealed to the agitating employees to withdraw their strike. No compromise could, however, be reached.

Chief minister Uddhav Thackeray, along with several other senior leaders, has, from time to time, appealed to the employees to return to work. The employees have been steady with their demands and have said they are “willing to face legal action and even end up in jail” rather than compromise at this point. This agitation, most say, is the only opportunity to put an end to their longstanding sufferings.

The agitation, however, has had a direct impact on the passenger commute over the past weeks. After the train services, most passengers — mainly from the rural areas — are dependent on the state bus service for intra-state transport. Besides being an efficient service, the ST buses have remained an affordable option for lower- and middle-class travellers.

Note: An earlier version of this report had erroneously identified Manoj Chaudhury as ‘Anil’.