The Streets Are Empty. How Are Hawkers Surviving This Lockdown?

A parallel economy with a turnover of Rs 80 crore a day, every street entrepreneur/trader supported an average of three others as employees or partners or workers on commission. 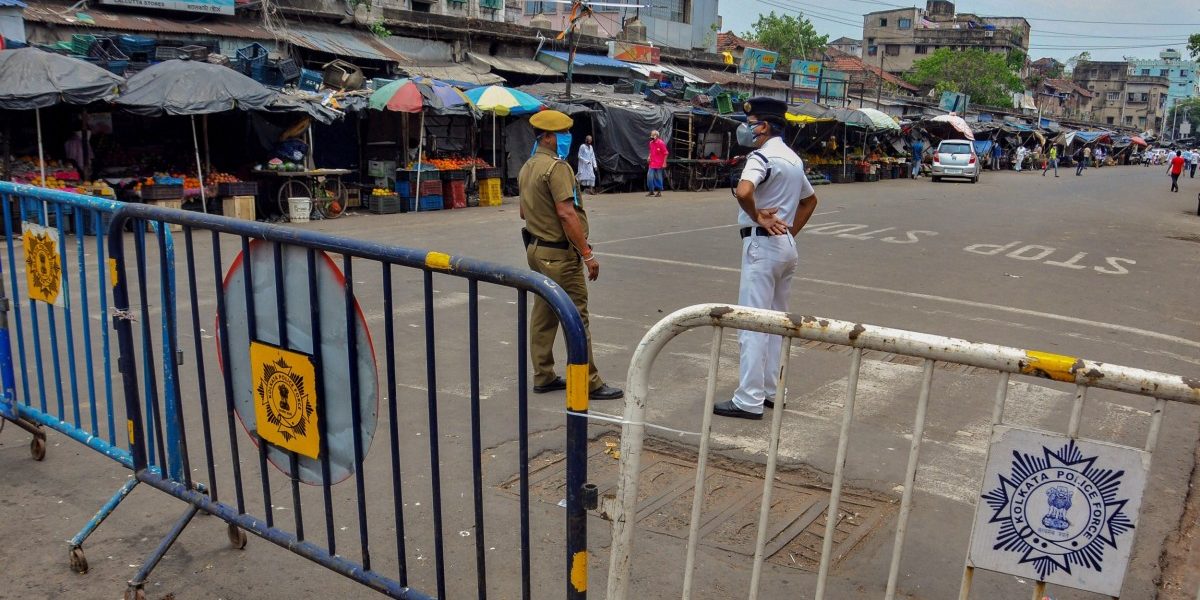 Police at Kolkata's Raja Bazaar during the lockdown. Photo: PTI

The lockdown has delivered a deadly punch to the informal sector. The empty streets are eerily quiet, because the extraordinary energy produced by the hustlers and hawkers, the crush of buyers and sellers, has melted away.

The lockdown has shut down the largest segment of the self employed, men and women who personify the under-exploited, ineffectively harnessed entrepreneurial spirit of India – street vendors, hawkers, itinerant sellers. The National Federation of Hawkers counts four crore people engaged in the business of selling on the streets, in the metros, in small towns, in rural hubs across India. Another estimated 70-80 lakh vendors who sold everything, from food to flashlights on the 20,000 long-distance and suburban trains across India have evaporated, because the trains are no longer plying.

A parallel economy with a turnover of Rs 80 crore a day, every street entrepreneur/trader supported an average of three others as employees or partners or workers on commission. All of them earned a livelihood, bare but sufficient. The entrepreneur on the street may have been the proprietor, a lessee, an employee or working for a commission; they were all autonomous persons. In Calcutta, they are desperate for meagre rations handed out by Shaktiman Ghosh, general secretary and founding member of the National Hawkers Federation, and his local comrades of the Hawkers Sangram Committee of West Bengal.

Also read: The Antidote to the Crisis is in Cooperation, not Segregation

Food bags with two kg rice, 500 g dal, 500 g on cooking oil, one kg potatoes, 500 g onions and one bar of soap are keeping destitution at bay for 300-odd families, who are on an area-wise delivery roster in Kolkata. Two weeks ago, these were men and women who bought their own food and ate it with dignity.

From Manicktala to Hatibagan in North Kolkata, on “haat” (weekly street market) days, it was a nightmare to negotiate the obstacle course posed by the hundreds of sellers of cheap-tailored garments – anything and everything – “jean pants” to baby clothes to suits, meaning salwar-kameez sets and the larger numbers of buyers, who came in from the districts to stock their retail business. The haat, like another one in Howrah, had taken over the busy Manicktala Main Road, a north-south thoroughfare of the city.

Check the status update for Haridas Saha Market, or the Harisha Paikari Haat and it will say “Closed.” The road is empty. Hatibagan’s pavement lined with street stalls on one side and big shops on the other are locked and shuttered.

The shutdown of the wholesale stitched clothes market means that the circuit that kept it supplied has also taken a huge hit. The power loom producers of cloth, the legions of tailors who stitched, the suppliers of thread and machine parts, the manufacturers of packets and packaging materials have also shut down. The low circuit economy, informal and unorganised, in just this one segment, has taken the hit.

The street food carts that fed the thousands of office goers, students and men and women who were part of the complex and vast services sector across the city have gone. There is no food on the street. Kolkata is without its phuchka wallas, its jhaal muri and papri chaat wallas. There are no chops, no fish fry or chilli chicken being sold on the street. No one is frying samosas, steaming up plates of momo and thukpa, frying up hundreds of kilos of “Chinese” chowmein, rolling out parathas for rolls filled with mutton, chicken, eggs or paneer.

A city with around 2.75 lakh street vendors has shut down. It means that the food vendors, about 50% cent from Uttar Pradesh and Bihar, have either gone back or are stranded in Kolkata, with no income and nothing to send home. The streets – Ballygunge Station, Jaan Bazar, Lake Market, Beleghata, Ultadanga – where vegetables and fruits and some food grains, spices and even utensils were sold every day by hundreds of vendors are shockingly free of the men and women who encroached the carriageways. It means that the farmers who produced the vegetables and grew the fruits are stranded with rotting piles of fresh food and no buyers. The supply chain has been cut – even though there is demand.

Recognising that street vendors were entrepreneurs and they, too, should have rights, the Street Vendors (Protection of Livelihood and Regulation of Street Vending) Act of 2014 was legislated to turn a precarious existence into an established model of doing business. The role of hawkers-street vendors in every urban area as a model for creating livelihoods was made permanent. Food grain being unloaded at a wholesale market in Kolkata. Photo: PTI

Hawkers are the army of the urban poor who supplied to the even bigger army of the urban poor and the relatively poor of the middle class. Two and a half percent of the land in every city was set aside for street vendors under the Act. Their existence and contribution was recognised and the Act provided for regulation through the Town Vending Committees. The Act required areas to be surveyed, hawkers to be registered and licensed to trade.

The abrupt lockdown ordered by the Narendra Modi government from March 24 on four hours notice was the final blow for street vendors; some states had already initiated a lockdown earlier, including West Bengal. Ghosh is hesitant to estimate the economic impact of the lockdown on the supply chain and the beyond that the informal sector production lines that have shut down as the hawkers have gone off the streets. All he says is that thousands of cottage, tiny, small and medium enterprises that produced goods for the street markets have been affected.

The informal sector includes women’s self-help groups that produced pickles, papads, mouth water churans, home made simple confectionary, stitched the tinsel and red garments for adorning household deities are without work, because there is no off-take. Women who tailored some of the clothes that were sold on the streets and so sustained their families, protected themselves against domestic violence and exploitative relationships are stranded.

The ripple effect of the pandemic on street vendors is not acknowledged by the government at the Centre and taking a cue from that, by the state governments. Housing and urban development minister Hardeep Puri estimates that there are 18 lakh vendors of whom 14 lakh are registered. Ghosh insists the number is four crore.

For vendors who could often earn Rs 1,000 a day, a cash handout of Rs 1,000 as sanctioned by the governments of Tripura and Tamil Nadu is an insult to their role in India’s trade. Delhi chief minister Arvind Kejriwal has announced a relief package of Rs 5,000 a month for auto, taxi, e-rickshaw, RTV, Gramin Sewa drivers which would be a realistic cash handout for hawkers, formally described as vendors under the Act, too.

The flood of cheap Chinese goods sold on the streets confirms that vendors are a part of a much larger trade network and not limited to selling goods made by India’s small and informal sector. National Hawkers Federation estimates say that 50% of the street vendors sell food. At least 35% of the fruits and vegetables sold in urban areas and in far-flung, remote rural corners are also sold by vendors. The remaining 20% of vendors sell clothes, plastic goods, unbranded crockery, cutlery and household goods.

(Each cluster of vendors in Kolkata, Delhi, Mumbai, Bengaluru, Chennai and in tier two and three cities cater for different kinds of buyers, from the relatively rich to the absolute poor. There are street markets that sell to the poorest urban resident food, clothes, shoes and household goods that are discards from other street markets. There are markets where the poorest urban resident can buy rotting vegetables, lentils, grains that is then salvaged and turned into a meal.

Without a scheme to sustain street vendors through this lockdown and the precautions that must follow a gradual roll back, urban distress will be widespread and difficult to manage.

Pandemics like COVID-19 cannot be “defeated” by locking down the economy for a month or two. The virus will infect lakhs of people before a vaccine is found or the world’s population develops immunity to withstand it. Compliance with norms for social or rather physical distancing are required as a minimum for people to stay safe outside their homes, in markets, in offices, as commuters will alter the urban landscape.

Streets that teemed with vendors selling everything from food, to safety pins, to shoes and cow dung cakes will have to be regulated, which would mean that the density of vendors would come down drastically. Vendors displaced by physical distancing regulations would have to either relocate, if such an alternative is possible, or they would go out of business. With unemployment at a 45-year high, growth declining every quarter, radical reorganisation imminent because of the impact of the virus, how will the enterprising hawker survive?

The National Federation of Hawkers has not, as yet, engaged on the immediate consequences to its members as physical distancing becomes the new normal. Ghosh has appealed to the Union government to release funds under the Urban Livelihood Mission – Rs 8,000 a month – till the crisis blows over. He, however, has no idea how long the crisis will impact his members. As self-employed entrepreneurs, street vendors are part of a “low circuit” economy. A break in the circuit will send producers/manufacturers for this segment of the economy into a tail spin.

Physical distancing will change how India eats its chaat, kulfi, pav bhaji, golguppas, phuchkas, jhaal muri, pakoras, chillas, peanuts, homemade chips and cooling drinks including tender coconut water. The clogged pavements, occupied patches of empty space and the always makeshift stalls that added to the congestion, the vibrancy of a city at all hours of the day and night are likely to be altered.

The complex network of informal enterprise supposedly unorganised, but in reality highly organised and strongly controlled, will present a challenge for governments, municipal corporations, nagar panchayats on the one hand and farmers on the other. One estimate suggests that about 8% of the vegetables sold in urban areas are sold through the network of street vendors.

At one level, the reduction of vendors in urban areas could mean that access to fresh, locally grown vegetables, fish, chicken and eggs will be seriously curtailed. At another level, it could create opportunities for a huge expansion in e-commerce and home delivery services. At yet another level, the poor will be even more marginalised than before; the truth is that the poor buy in small quantities and the amounts they spend are based on what they earn every day.

The consequences of the pandemic on a sector like street vendors needs a policy response; the Union government has to end its ostrich act and stop describing the crisis as a “social” one and get down to the business of strategising what it wants to do with lakhs of people who will go out of business with physical distancing, such as street vendors.