An RTI filed by The Wire has revealed that though 25 sewer deaths have been recorded in Maharashtra, not a single family has been compensated. 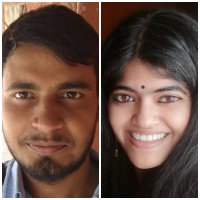 New Delhi: Between 1993 and 2019, families of only around 50% of the workers who have died cleaning sewers have received the compensation of Rs 10 lakh each. In several cases, the compensation amount is less than Rs 10 lakh, a right to information query filed by The Wire has revealed.

In a historic judgement in 2014, the Supreme Court had ordered that the families of all those who died during sewer cleaning must be given Rs 10 lakh as compensation.

However, in response to an RTI query, the National Commission for Safai Karamcharis (NCSK) has revealed that according to information provided by different states, 814 people are officially reported to have died during sewer cleaning in 20 states since 1993, out of which full compensation of Rs 10 lakh has been granted in only 455 cases.

However, this figure of sewer-related deaths is still incomplete and the NCSK is continuously writing to states to gather the remaining information. The NCSK works under the Ministry of Social Justice and Empowerment and is responsible for monitoring cases of deaths during sewer cleaning across the country and collecting data related to it.

In the matter Safai Karamchari Andolan vs the Government of India on March 27, 2014, the Supreme Court had ordered the government to identify the families of all persons who died during sewage work (manholes or septic tanks) since 1993 and award compensation of Rs 10 lakh for each such death.

Documents obtained by The Wire reveal that in many cases, victims’ families have been granted Rs 5 lakh, Rs 4 lakh or even Rs 2 lakh instead of Rs 10 lakh. The responsibility of distributing compensation rests with the concerned official, such as contractor, municipal corporation, district administration or state government.

According to data provided by the Commission, the highest number of deaths due to asphyxiation in a sewer, have occurred in Tamil Nadu, at 206, but only in 162 cases have the victims’ families been paid the full compensation amount.

In this matter, the situation in Gujarat is particularly bad. So far, 156 people have been identified as having died during sewer work in the state, but only 53, that is only 34%, of victims’ families have been awarded Rs 10 lakh compensation. 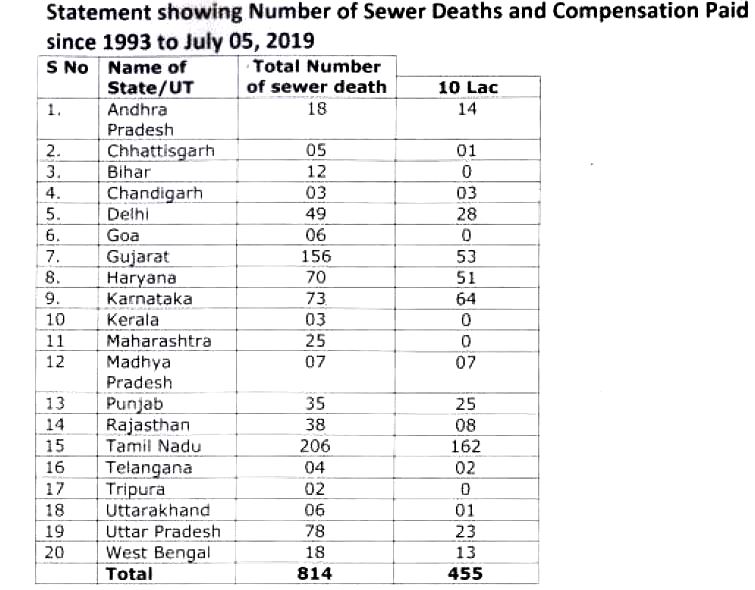 The situation in Uttar Pradesh is no better. A total of 78 deaths have been identified as having occurred during sewer cleaning, but full compensation has been granted to only 23 victims’ families, that is 30%.

An NCSK official said that they are constantly writing to the states, asking them to grant full compensation to all the victims’ families in compliance with the Supreme Court’s order. The Wire also reached out to Manhar Zala, chairman of the NCSK, but he did not respond.

As of July 2019, a total of 49 sewer deaths were reported in the country’s capital, out of which the families of only 28 have received the full compensation. However, Zala had claimed in September 2019 that a total of 64 people have died during sewer cleaning in Delhi so far, of which Rs 10 lakh each has been awarded to the families of 46.

The gravity of deaths during sewer work can be assessed from the fact that 38 sanitation workers have died in the process within the last two years in Delhi alone.

If we look at other states, we find that 70 people have died during sewer cleaning in Haryana, of which only 51 victims’ kin have received Rs 10 lakh.

Meanwhile, in Karnataka, the total number of such deaths is 73, out of which full compensation has been granted in 64 cases.

The case of Maharashtra is the most shocking. So far, a total 25 people have died during sewer work but not a single victims’ family has received any compensation.

In Madhya Pradesh, however, a total of seven cases have been reported so far and full compensation has been awarded in all of them.

In Punjab, 35 people died during sewer cleaning and compensation of Rs 10 lakh has been awarded in 25 cases only. In Rajasthan, 38 manual scavengers have reportedly died during cleaning but families of only eight have received full compensation.

Similarly, four deaths were reported in Telangana during sewer cleaning, two in Tripura, six in Uttarakhand and 18 in West Bengal but full compensation has been awarded in only two, zero, one and 13 cases, respectively.

Social workers and the victims’ families allege that no action is being taken against those responsible for these deaths and the matter is brushed aside after granting small amounts as compensation. They also allege that the police does not properly investigate such cases.

Bezwada Wilson, national convenor of the Safai Karamchari Andolan, told The Wire, “The court should have taken cognisance of why their order is not being followed. Are they not aware of it? The courts only say that what is happening is not right… No one would follow such an order. They should set a deadline. Action has not been taken against a single person responsible for the death of sanitation workers.”

The Centre has also admitted that they are not aware whether any action has been taken against any person in these cases. The government said, addressing the Lok Sabha, that it has no information regarding conviction or punishment for any people hiring manual scavengers.

Recently, the Supreme Court reprimanded the Central government over the deaths of workers during sewerage work. “In no country, people are sent to gas chambers to die. Every month four to five persons are losing their lives in manual scavenging,” the court said.

Questions have also been raised about collating data related to sewer deaths. The NCSK collates the data on the basis of information provided by the states, newspapers or other sources.

According to an official, the Commission has subscribed to four newspapers on the basis of which the information is collated and the concerned department is notified. The Commission remains ignorant of the sewer-related deaths that are not reported in those newspapers.

According to official figures, a total of 814 sanitation workers have died while cleaning sewers since 1993. However, the Safai Karamchari Andolan claims that this figure is 1,870. Wilson said that he has evidence of 1,096 deaths during sewerage work and has given all the information regarding the matter to the ministry.

The NCSK has limited powers

As per the rules, the NCSK is responsible for monitoring and giving directions. It does not have the power to implement its directives. District-level officials are responsible for granting compensation to those eligible.

The NCSK was set up as a statutory body for three years on August 12, 1994. However, its time limit has been extended several times through amendments since then. Currently, it is operating as a non-statutory institution.

The Manual Scavenging Act 2013 prohibits the manual cleaning of sewers. If at all such cleaning is required, there are 27 rules to be followed. It mandates the permission of an engineer to enter the sewer and the presence of an ambulance nearby to rush the worker to the hospital in case of an accident.

Rules to be followed during sewer cleaning include the use of special suit, oxygen cylinder, mask, gum shoes and safety belt as well as informing the ambulance first in case of an emergency. However, in many cases it has been found that neither the government nor private agencies follow these rules.