Republic of #GRIT: How Cleaning Up Varanasi for Modi Left Two Men Dead

Three men entered a sewage line. Only one came out alive. Then the project manager "asked the other labourers to throw me back in, to get rid of the evidence." 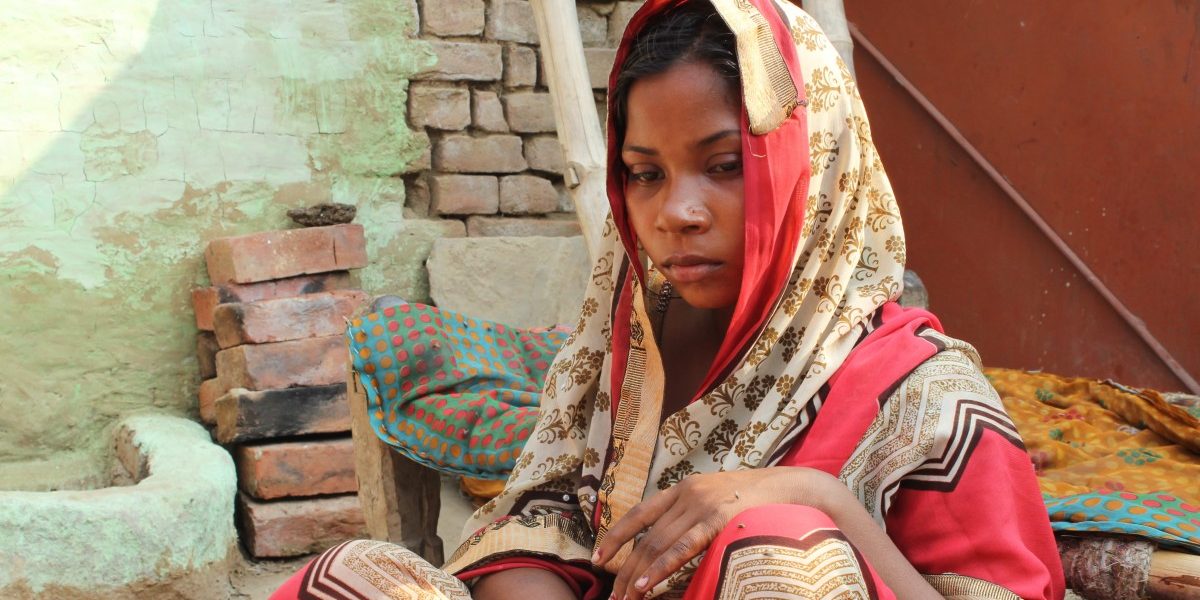 Bhabua (Bihar): At 10 am in Madurna village, Satyendra Paswan, 22, limped out of his small brick house. He wore a faded banian (vest) and floral shorts, and carried a bamboo cane.

Paswan asked his neighbour, Jitendra, to shoot a video on his mobile phone. He would record his description of the day he entered a sewage line in the Chaukaghat area of Varanasi, along with two family-members, Dinesh (27) and Vikas Paswan (22) – and only Satyendra came out alive.

On November 12, 2018, Prime Minister Narendra Modi was to visit Varanasi, his parliamentary constituency. Ahead of his arrival, the Dinapur sewage treatment plant – built to treat 140 million litres of sewage a day – had to be made operational.

In 2012, the Uttar Pradesh Jal Board had tied up with a private firm, EMS Infracon, through a tender under the Ganga Action Plan project.

They had never met him before, and believed him to be just another thekedar (contractor). He offered them Rs 5,000 to demolish a house, Satyendra said.

“Instead he took us to a sewage pipeline. We told him we had never done this work before in our lives. He threatened us and pressured us to clean the pipeline,” Satyendra told The Wire.

The men were not given protective wear, and Satyendra said they were not aware that they were cleaning a pipeline that had been non-operational for a year.

The pipeline was connected to the Dinapur plant. It was clogged with waste. As the workers cleared the blockage, a wave of sewage rushed over them.

“There was a strong fishy odour and it became hard for us to breathe,” Satyendar said. “Within a moment, Dinesh and I came out. But Vikas had lost consciousness and was stuck in the pipe. Dinesh went back in to try and rescue his brother.”

“It didn’t take long. Dinesh started panting and suddenly, gushing sewage with an unbearable stench took them away. Both died… I couldn’t save anyone,” Satyendra said. “I still remember Dinesh’s voice. He yelled for help before he was washed away.” 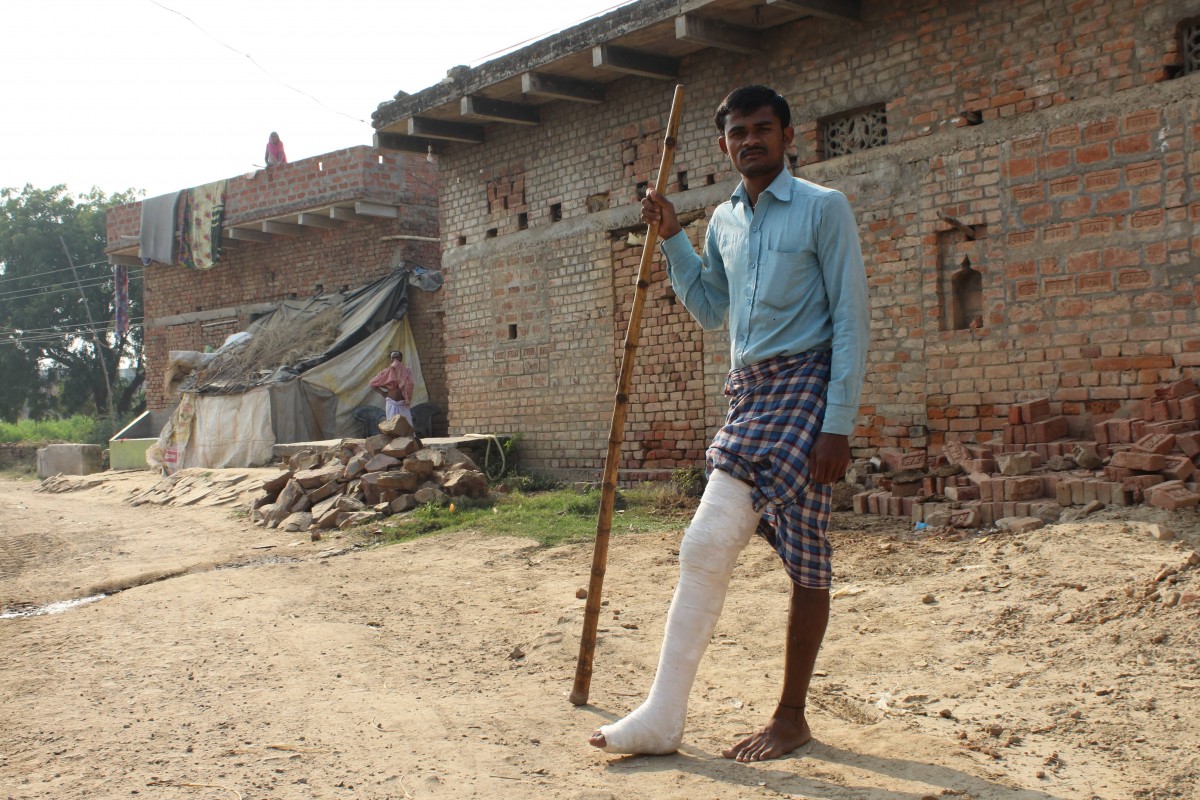 The project manager and a few other labourers arrived at the spot soon after.

“I had fallen on the ground in pain, waiting for help. Looking at me, he [Srivatsav] walked towards the sewage well. He asked the other labourers to throw me back in, to get rid of the evidence. But then he changed his mind and left,” Satyender said.

He waved away the flies that tried to settle on his injured leg. “He was already responsible for the death of my friends, and he wanted to kill me too.”

Speaking to The Wire on the phone, Srivatsav said, “Who is Satyendra? I have not taken anyone anywhere. I don’t know what happened on that day, I was not in Varanasi.”

“Each deceased person’s family has already received a Rs 12 lakh cheque from the company,” he added. “Come to Varanasi. I will explain the story in detail. What will you understand over the phone.”

Srivastav stopped answering this reporter’s calls. EMS Infracon officials also did not respond to The Wire’s request for a comment.

By the evening of November 10, police officials reached the spot, and with the help of a team from the National Disaster Response Force, retrieved the workers’ bodies. An old family photograph that has been put up, with Dinesh is green and Vikas in back.

Hours later, the victims’ families reached Chaukaghat from Madurna – about 70 km away– along with their village head, Prabhu Narayan Singh Chauhan.

Dinesh’s wife Kallu Devi (24) told The Wire about the day everything changed for her. “I was feeding my four children when I heard he had met with an accident. I rushed to the spot along with others from the village.”

After searching for three hours, she said, the NDRF team had been able to find Vikas’s body, but not that of her husband. Eventually the police forced them to leave.

“They said that my husband’s body was impossible to find. With the pradhan, we all protested and blocked the Chaukaghat road that night.”

Around 11 pm, she said, the police and rescue team brought in a JCB excavator, demolished the well, broke the pipeline, and pulled out Dinesh’s body. 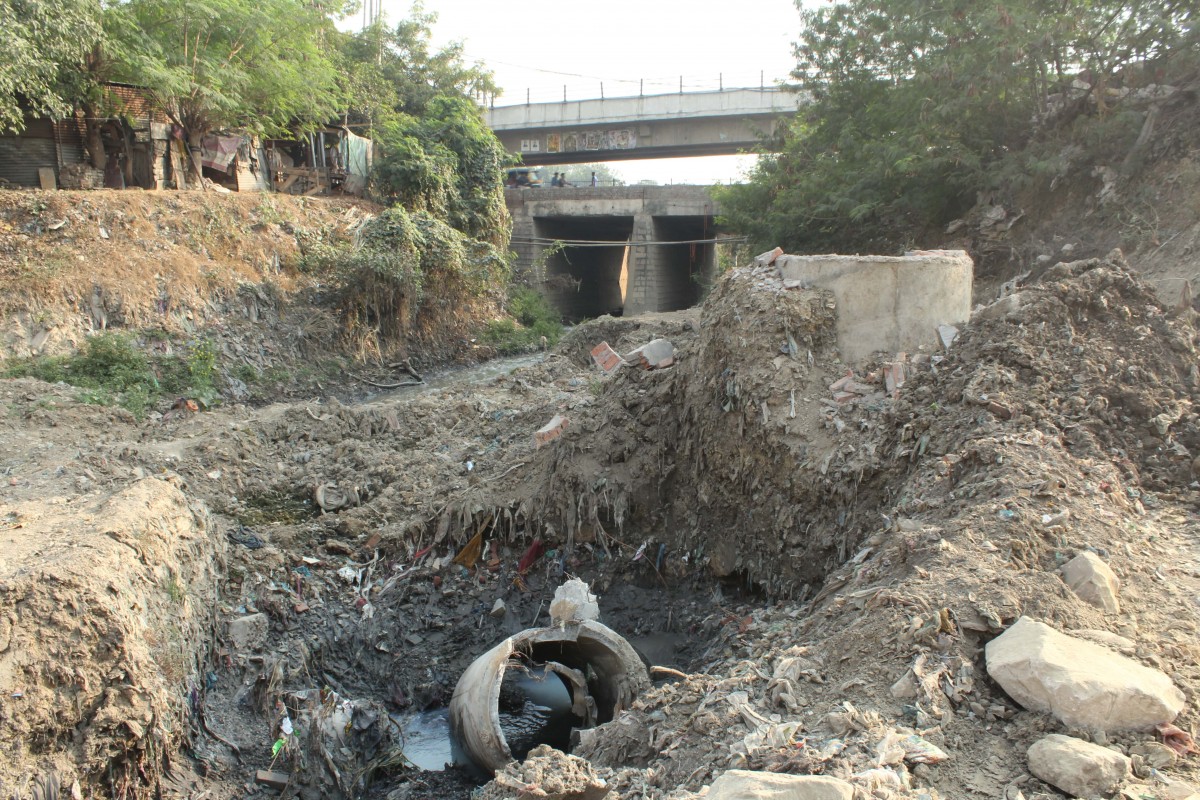 The sewage pipeline, after being broken.

“He was covered in sewage from head to toe. His nose had been bleeding and there was muck filled in it. Maybe because of the JCB, his chest and throat were ruptured,” said Kallu Devi, breaking into tears.

Dinesh and Vikas, Kallu Devi said, had been working in Gujarat for a few months and had come back on November 6 to celebrate Diwali. But money was tight, and their mother Tetara Devi (68) was severely ill.

“Before leaving the house, Dinesh told his mother that he will bring back the proper medicines and that she would be fine.” His mother’s health deteriorated quickly after Dinesh’s death, and she too died after two days, Kallu Devi said.

Vikas’s house is just a stone’s throw away from Dinesh’s. Vikas’s wife Anju Devi, 20, is seven months pregnant. She does not know how she will manage without him.

Surrounded by six other women and with a saree wrapped around her head, she remained quiet when asked about her husband’s death.

Satyendra claimed that he has got no compensation and no help with treatment for his injured leg. “I have not received a single rupee from the company or the Uttar Pradesh state government.”

S.K. Burman, a project manager with Uttar Pradesh Jal Nigam – Ganga Action Plan, said that the government and local bodies “had no hand” in the deaths. It was EMS Infracon and project manager Pankaj Srivatsav who had to be held accountable.

Asked about the Supreme Court-mandated Rs 10 lakh compensation for the families of manual scavengers who die on the job, Burman said, “Why should we pay? The private company has already given a cheque of Rs 12 lakh to both the families.”

The cheques for Rs 12 lakh, the victims’ families said, are still with village head Prabhu Narayan Singh Chouhan.  The three families are suspicious, and afraid of asking Chouhan for the cheques.

“We have no bank accounts, so what? Can’t we manage ourselves?” Kallu Devi said. “The two were eaten by the company and now he is eating us alive. But nobody can do anything.” 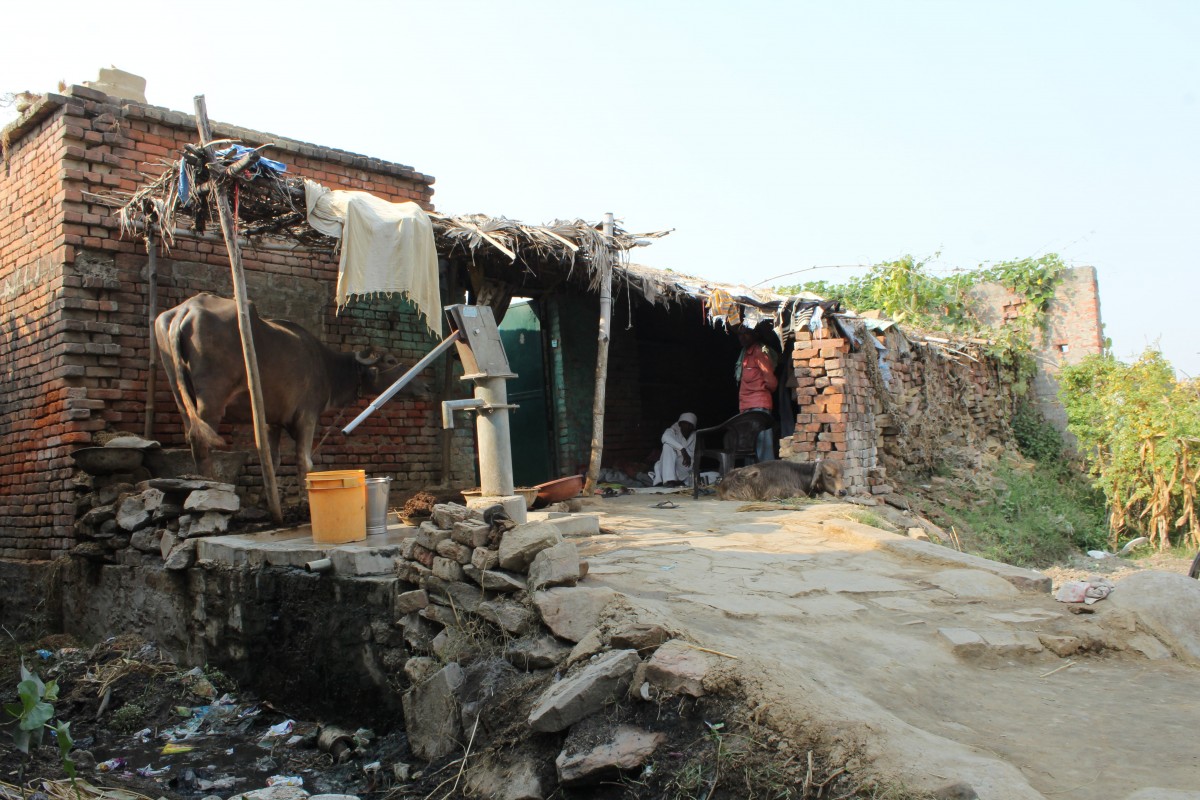 In Madurna village, Chouhan was surrounded by his men.

“Yes, the cheques are with me. How will they receive the money unless they have an account in the bank?” he told The Wire. “I am assisting them in opening an account. Vikas’s wife has no bank account. Dinesh’s wife got her name wrong in her Aadhaar card and there are some bank-related issues.”

As the conversation progressed, Chouhan’s tone began to change. He told this reporter to tear out and hand over the notebook pages with Satyendra’s testimony and the details of Vikas and Dinesh’s families. 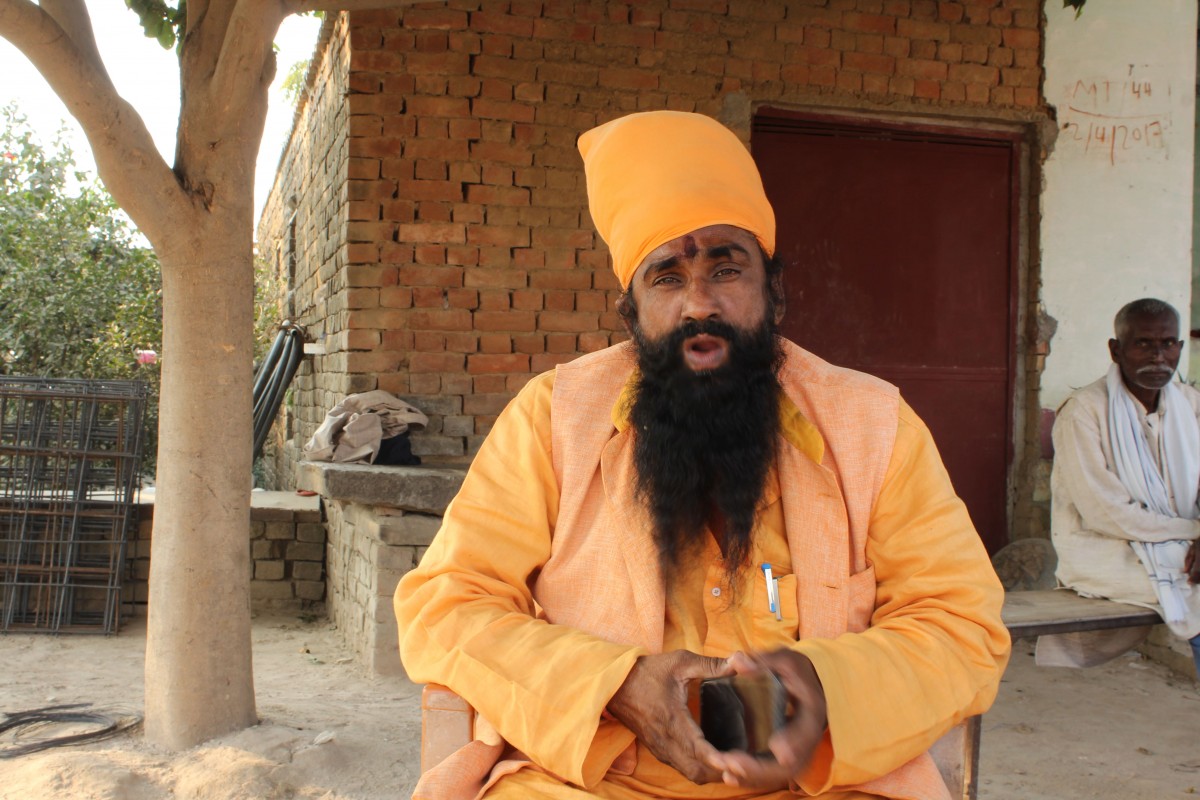 “These unusual incidents might happen to anyone. What will you get from writing this?” Chouhan said, visibly angered. Then he smiled. “You came all the way to Bihar safely. But on your way back, you too might end up in an accident.”

All images by Sandeep Manohar.