Republic of #Grit: A Mizoram Town Is Showing the Way to Community-Driven Sanitation

In Biate, children are taught the importance of keeping the town clean from a young age.

Biate (Mizoram): Saturday mornings in the town of Biate, Mizoram, start noisy. Ushered by loudspeakers, by 6:30 am, children aged three or four onwards spill onto the streets. Little brooms in hand, they go about sweeping the town clean.

Practically, this boisterous army doesn’t accomplish much, except raise puffs of dust. Biate, a lush green Census town perched on a mountain 175 km away from state capital Aizawl, is already very clean. It is, officially, the cleanest in the northeastern state of Mizoram, the state government had announced on October 2, 2017. This was same year Biate became one of Mizoram’s first open defecation free (ODF) towns.

In a 100% ODF state, with one of the best cleanliness drives in the country, Biate, one of Mizoram’s oldest settlements, embodies the best practices for sanitation, waste management and community participation.

Unlike in most of India, there are no sanitation workers here, said government officials and local leaders. Managing waste is not ‘dirty’ work for hired labour from a marginalised community, but collective responsibility.

The town is home to about 2,200 people, five churches, 10 football clubs and a plethora of volunteer groups. It announces itself as a zero–litter town, and it means business. Streets, decked with flowering plants, have dustbins for bio-degradable and non-bio-degradable waste, marked as sanitation points. People segregate waste at home; some even have personal compost pits. The local Community Health Centre (CHC) is sparkling, and the town is largely disease free. 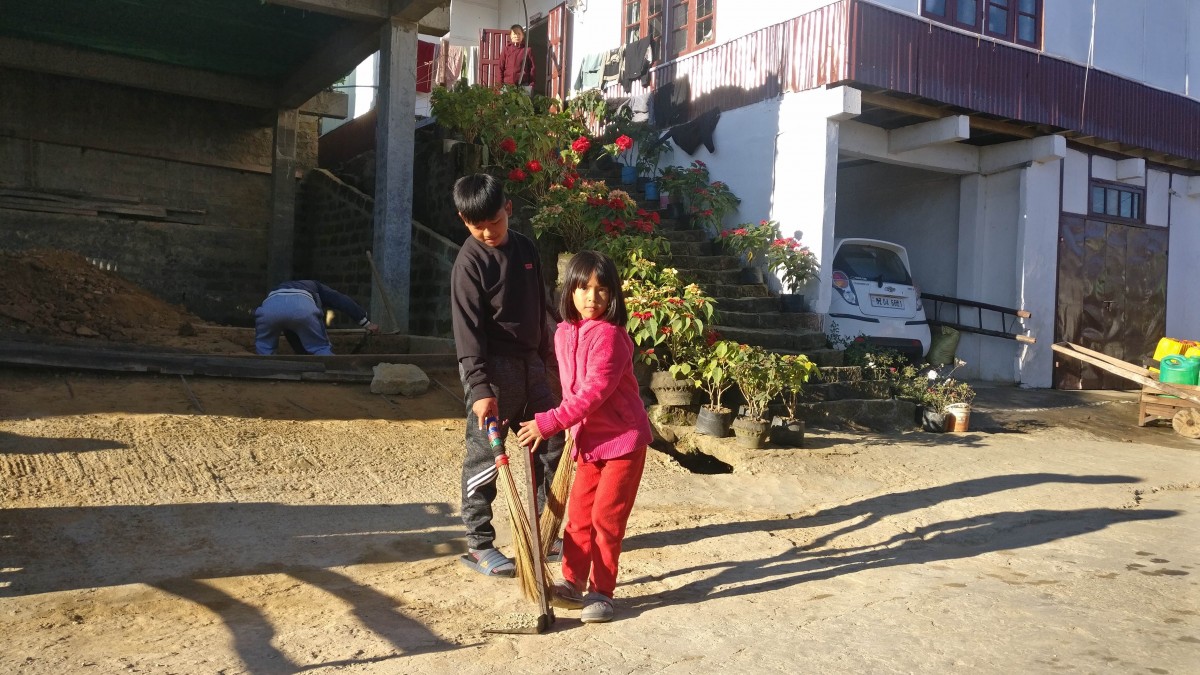 Every household in Biate contributes Rs 50 per month to the village council (VC), the local governance body. The money goes into hiring garbage tippers, paying volunteers who manage waste and buying them safety equipment.

This is a common practice in Mizoram; localities in Aizawl contribute Rs 20 per month for their upkeep. However, Biate “had a head start,” pointed out Vanlanramsanga, “as their chiefs decreed in the 1800s, residents should clean themselves, their houses, their utensils. Those who didn’t were fined a chicken or 25 paise.”

Chieftainship was abolished in Mizoram in 1964, but the VC and the local elders have carried that legacy forward. 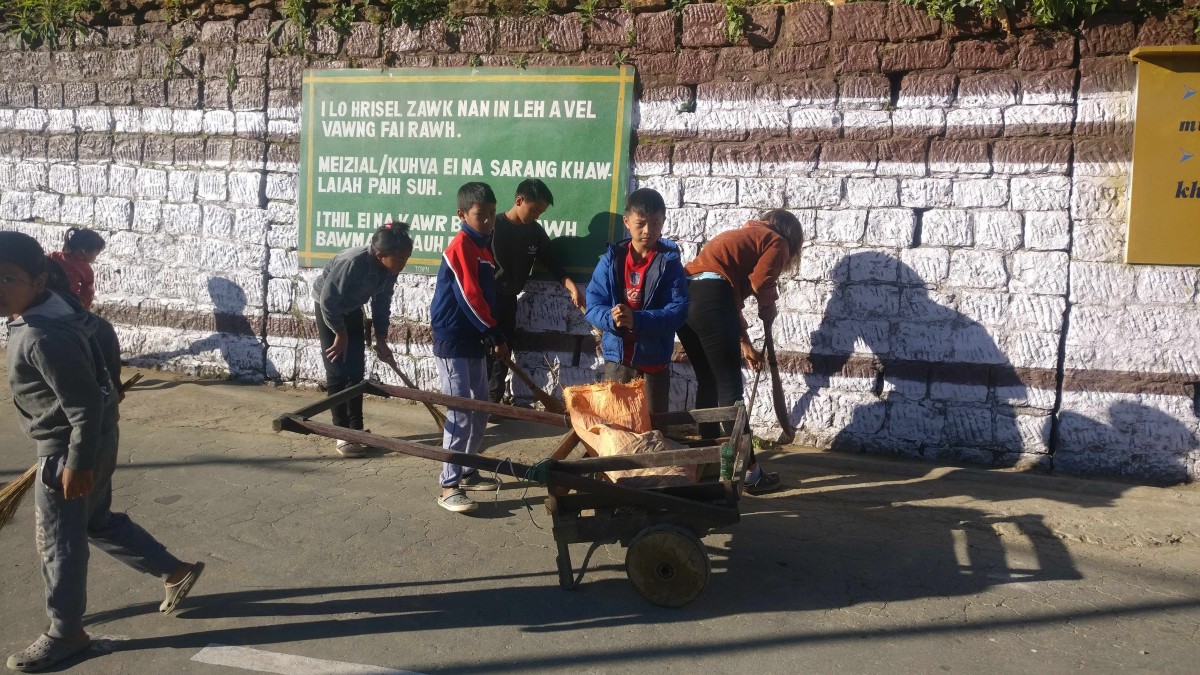 When the UD&PA declared Biate the cleanest, it recognised work the community had done for decades. In May 2018, the Centre named Biate the best city for ‘Innovation & Best Practices’ in the Northeast Zone, under the Swachh Survekshan 2018 awards, the government’s country-wide ranking exercise. Its Community Health Centre (CHC) came first in the Kayakalp Awards, 2017, given out to the best public health facilities by the Union health ministry. It had come second in 2016.

At the moment, Biate is readying its reports and submissions for the Swachch Survekshan Awards 2019.

“Yes, we like winning awards, it keeps us motivated,” laughed Lawmsangzuali, 25, a local school teacher, leading one contingent of children through one of Biate’s 14 localities. She joined the cleaning drives when she was five and is now the one of the people in charge.

The children have similar responses – “Yes, we like cleaning”; “No, we don’t mind getting out bed early”; “It’s good for our health, it makes Biate better”.

They find these questions puzzling, as they’ve never interrogated the need for these cleaning drives. Biate has been doing this since their great-grandparents’ generation, when the Young Mizo Association (YMA) came up with the idea. 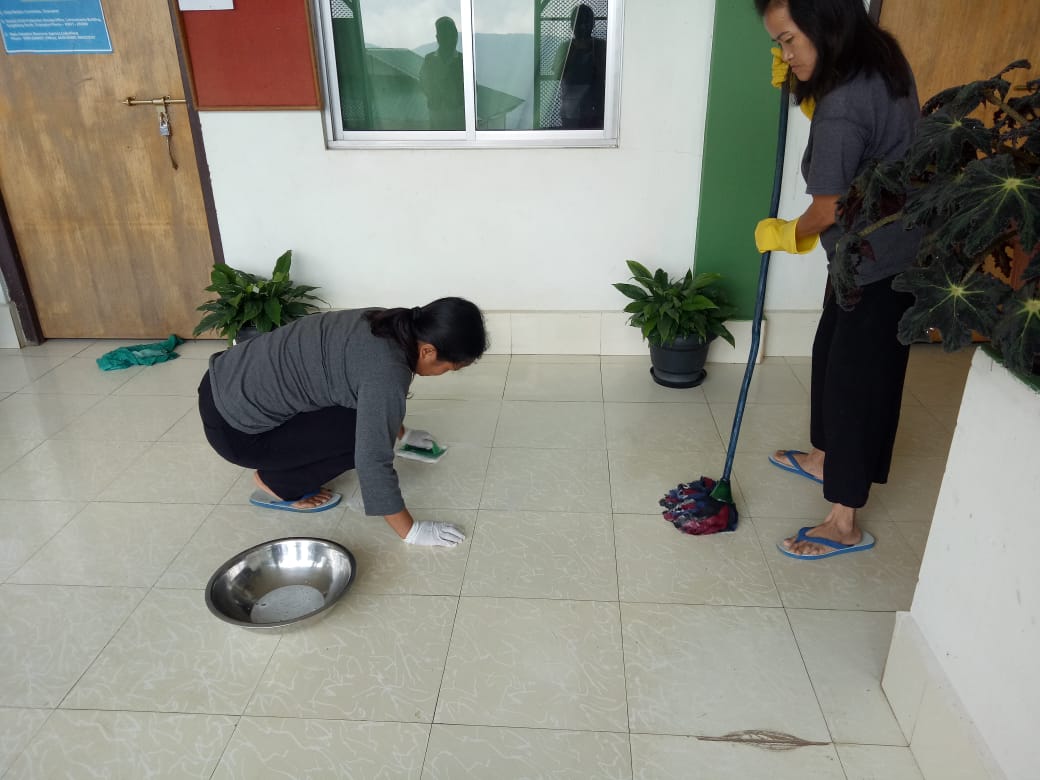 More than just an organisation

Almost everyone in Mizoram is a member of the YMA, the state’s largest civil sector organisation, founded in 1935 by Christian missionaries. The YMA is more than a mere organisation, it is a way of life for most Mizo people, as important as church and more important than the government.

The current YMA general secretary, Lalhmachhuana, said they were the first to start building toilets in the state, and teach people how to use them. He, like most Mizos, credits the missionaries with teaching them how to be clean. 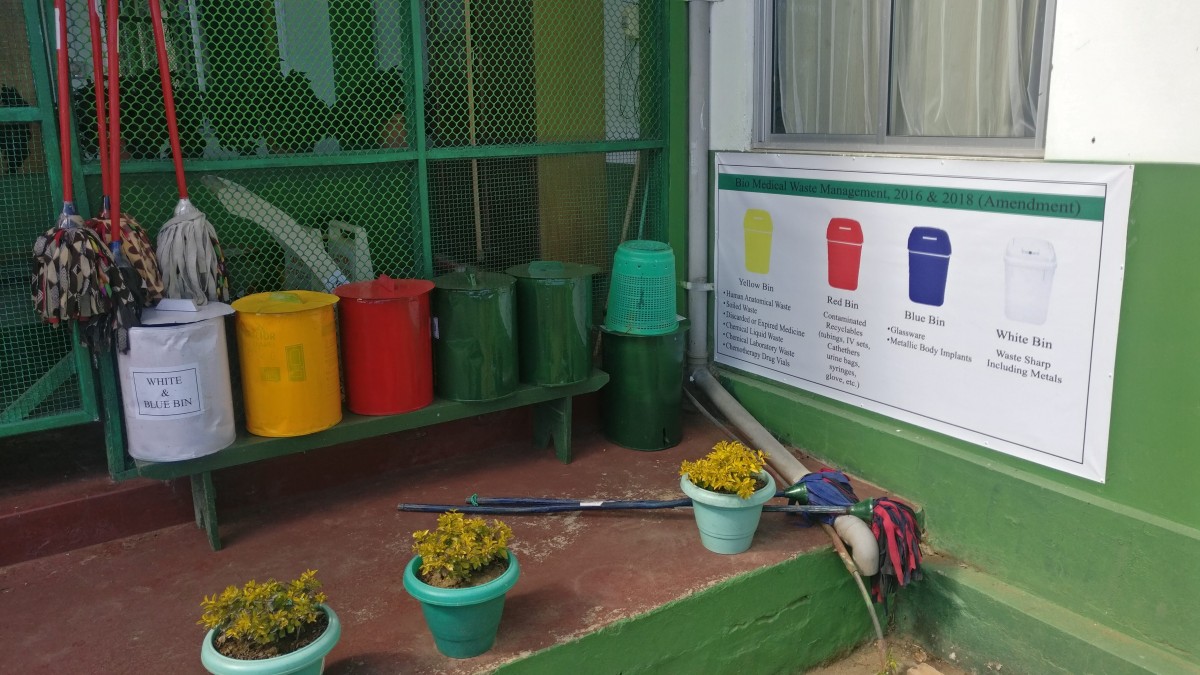 K. Thangkunga, 96, one of Biate’s oldest residents, served as the town YMA president for many years. He was part of the group that kicked off the town’s sanitation drive. “People were backward then, they lived in thatched houses,” he said. Like the chiefs of yore, their work was based on surveillance and some punitive measures. Those who didn’t get with the programme, despite encouragement and help, were fined. No one, he said, would defy the YMA.

This does means that outside town boundaries, where no one’s watching, people litter easily. The roads leading into Biate, and the town’s highest peak, its favourite picnic spot, have familiar plastic debris, empty water bottles and packets of chips and biscuits.

Still, the drives work because the leaders work alongside the people, said R. Lalremkuanga, the current YMA president in Biate.

The children are part of YMA Chhang, a modern iteration of the Mizo Children Association (1947-1980), which originally sent them on sweeping drives. The streets no longer need them, but tradition holds strong. It engrains the idea of caring for common space. 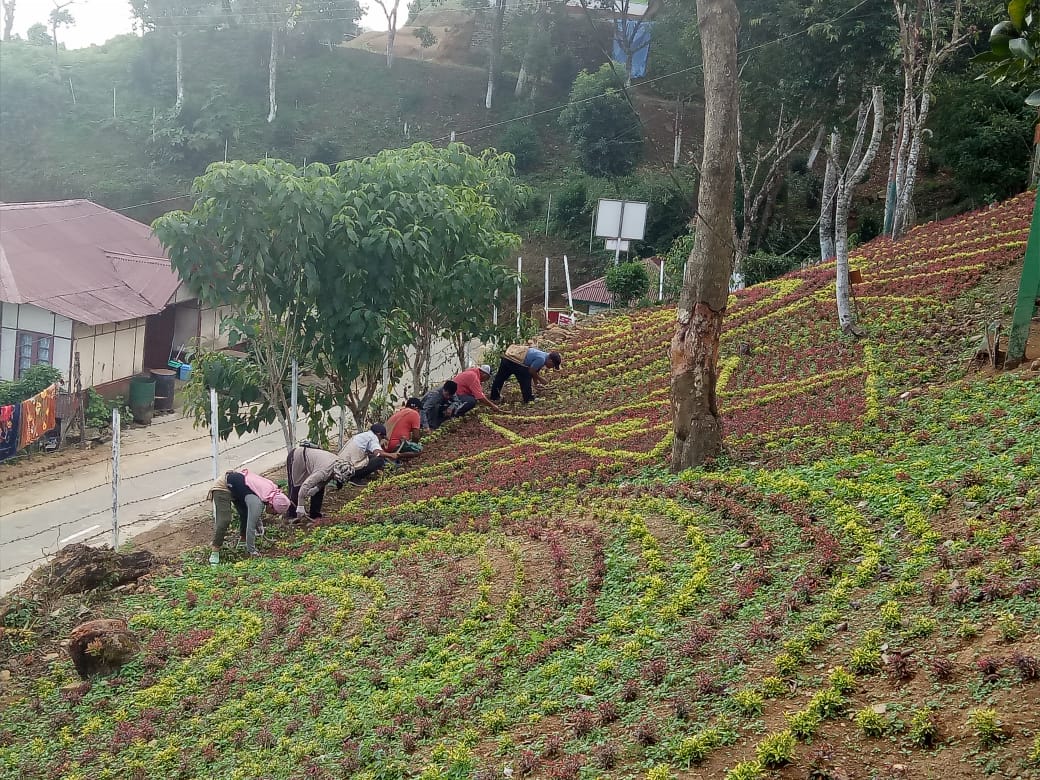 The town functions largely without government aid. Residents have built soak pits to manage the CHC’s medical waste, and used the Kayakalp money to cover its drains. Sharp objects are disposed separately. The waste is sorted into liquid and solid, and filtered through layers of rocks in the pit, so the water flowing back into the mountains is as clean as possible.

In 2007, when three young men from Biate heard of waste management training offered by the Kerala government, under the Spices Board of India, they signed up quickly. They came back to start Biate’s vermi-compost pit. “It was difficult initially,” said Lal Chhanhima Jonste, “we were running into loss trying to transport the compost to Aizawl to sell it.”

Two years ago, after almost shutting down the pit, the three signed up as volunteers under Swachh Survekshan, giving their efforts a new lease on life.

Every Monday, volunteers collect the waste from Biate’s sanitation points, and segregate it further at the compost pit. They have their own gear – masks, gloves, boots – and have trained others in the town to manage the pit. Most of the Biate’s wet waste, that’s not already in private compost pits, goes here, to be broken down by a species of Japanese earthworms. 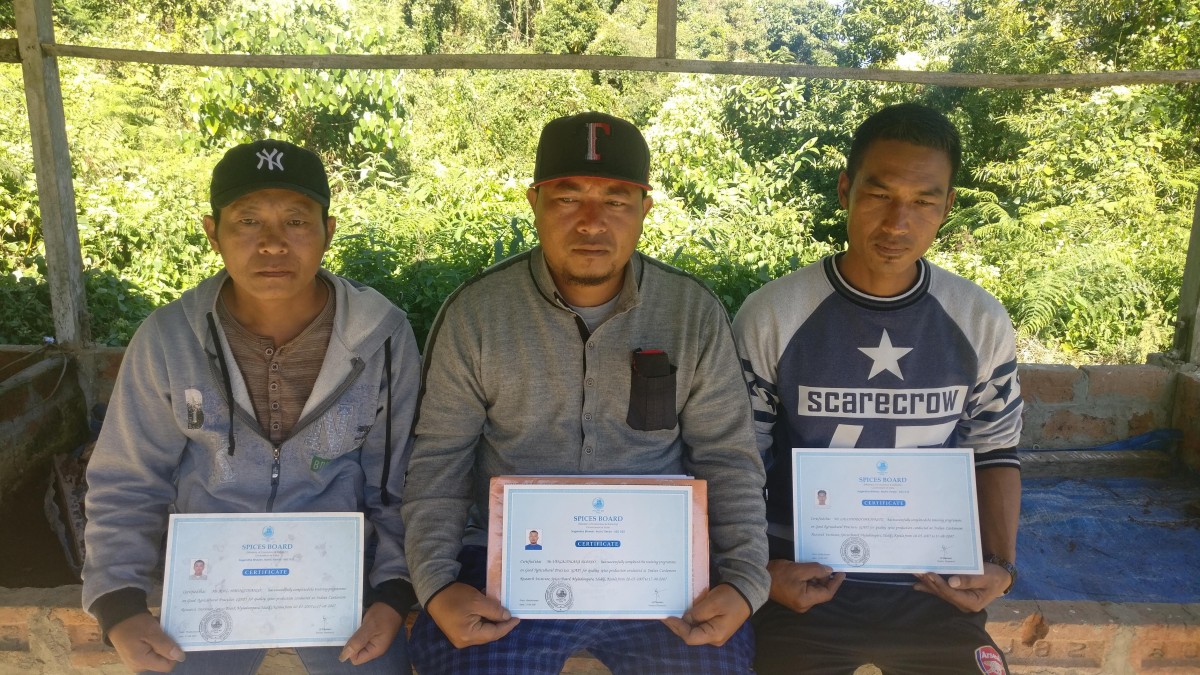 The rest is driven to the dumping site, two kilometres outside of town. Open dumping is the one thing tripping up not just Biate’s innovativeness, but all of Mizoram’s sanitation drive. It is, literally, the state’s dirty secret. The hills are dotted with plumes of smoke, from constantly aflame dump sites.

In Biate, once a week, three garbage tippers worth of trash is thrown down the side of a mountain, the town’s official dumping ground, built by a bend in the road. The tipper is privately hired, but a rotation of volunteers, from any one of Biate’s several civil sector organisations, handle the waste. The tipper drives up to edge of the bend and spills trash into the open. A wall, built downhill, stops it from going further and getting into streams.

“The waste is not as well sorted as it can be,” said Vanlanramsanga, even in as efficient a place as Biate. 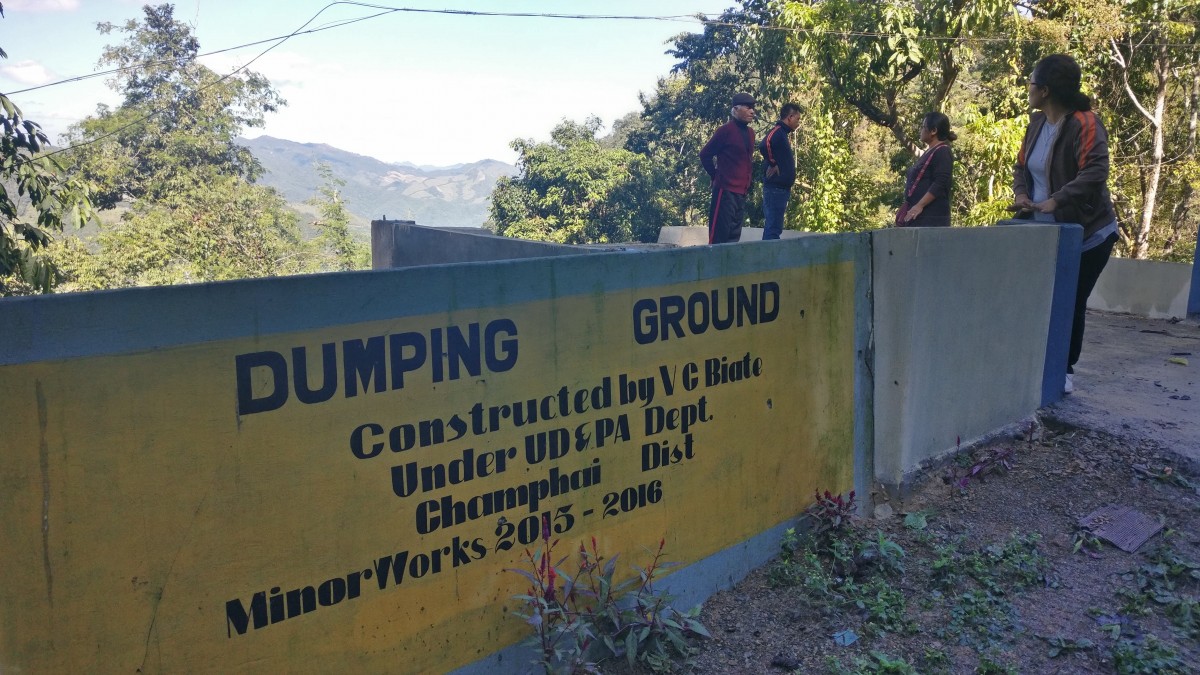 He, and Biate residents, acknowledge this is a problem. Mizoram’s drive to sanitise may have started years before the Centre’s Swachh Bharat Mission – they held a sanitation week around October 2, Gandhi Jayanti, in 1977 – but open dumping looms large.

“No one is happy about it,” said Lalremkuanga, “but we need the government’s help here.”

One such plant is partially operational outside Aizawl, on a pilot basis. The department expects it to be fully functional by the end of January. The waste management centre that is supposed to replace open dumping in Biate should be up and running before the rains arrive, by the end of April. “We couldn’t issue the work order [for Biate] earlier,” said Vanlanramsanga, “because of the model code of conduct.”

The state Public Health Engineering Department (PHED), meanwhile, is experimenting with a model landfill site outside of Aizawl, which will protect the ground and nearby water bodies from the leachate. Once filled, the flattened ground will be used as a park or a playground, since such spaces are rare in the hilly terrain. If successful, the PHED will replicate such landfills in suitable villages.

Biate has also started awareness programmes in schools to cut down on plastic. “The idea is to go back to banana leaves for packaging,” said Lalremkuanga, “but it’s nascent.” 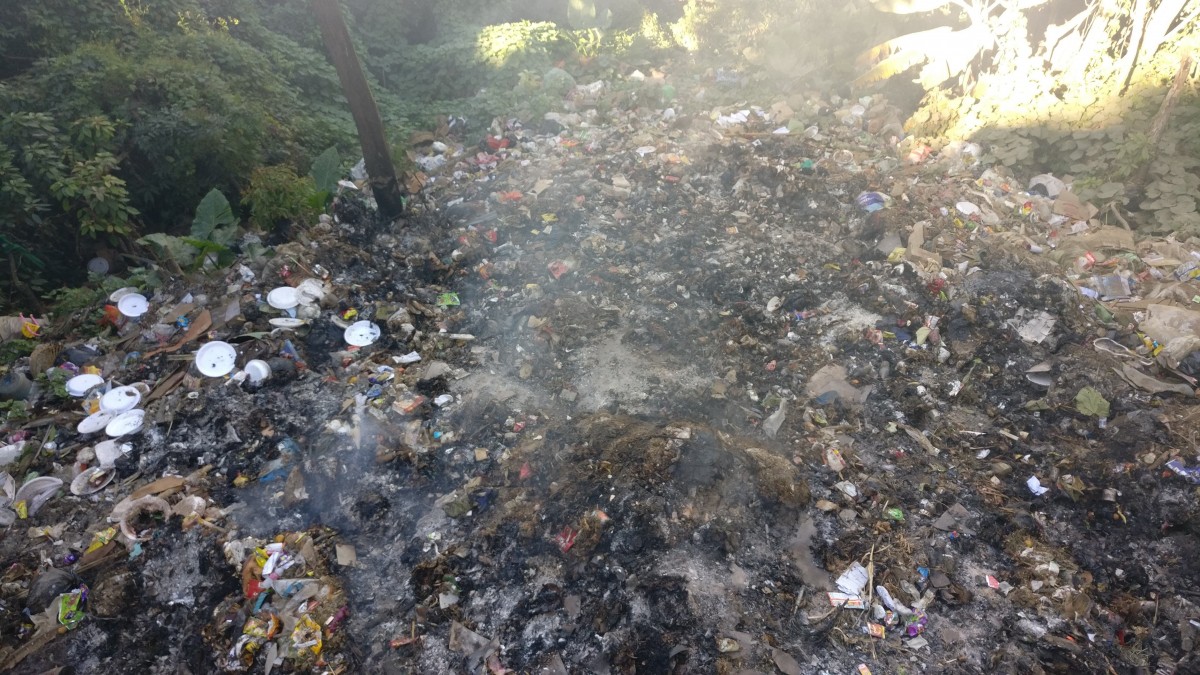 India’s sprawling megacities have, almost fatalistically, gotten used to landfills as big as hills, or fuming lakes. Mizoram’s cities and towns are determined to iron out their waste problem by 2020, as mandated by the Solid Waste Management Rules, 2016.

Their work has had visible results. In the 10 years between the National Family Health Survey (NFHS) 3 and 4, Mizoram reduced childhood stunting (impaired physical growth) by 12 percentage points, wasting (low height for weight) by three percentage points, and underweight by nine percentage points. These conditions, indicators of severe and widespread malnutrition, occur alongside infectious disease and diarrhoea, strongly linked to the lack of sanitation, clean drinking water and open defecation.

Though data doesn’t include town and village-wise numbers, Biate has plenty of anecdotal proof.

“Around 1992, almost 70 to 80 people would come to the OPD everyday,” said Dr H. Lalengzauva, the town’s dental surgeon and one of the CHC doctors. “Now, it’s around 15.” The volume of patients with infectious diseases – typhoid, diarrhoea, etc. – associated with poor sanitation, has dropped drastically in the last two decades, he estimated. 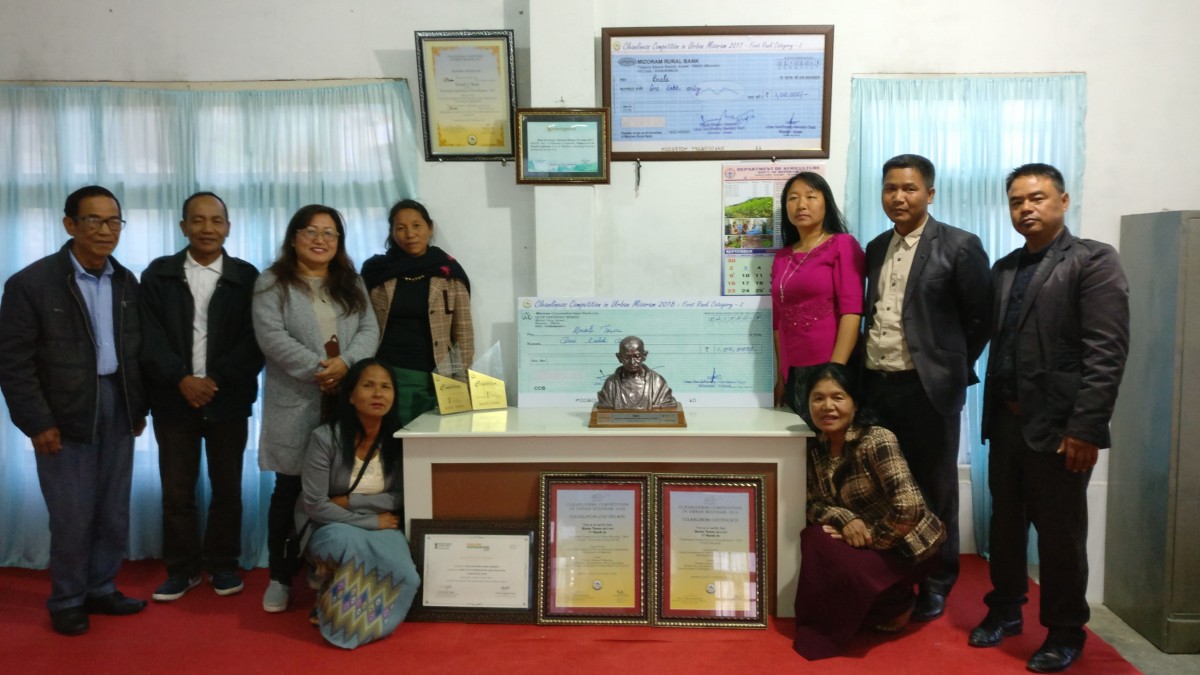 Community doctors and others stand with the awards Biate has received.

Dr Lallawmkimi Chhakchhwak, Biate’s nodal health officer, and Dr Lalengzauva’s wife, told The Wire she hadn’t come across any stunted or wasted children in her 18 years of practice. “We’ve also not seen any case of malaria for years,” she added. “We haven’t seen typhoid or dysentery in almost five years, either.”

Biate has luck and privilege on its side. Its topography ensures water does not stagnate, despite being surrounded by semi-evergreen forests. It is a wealthier town as very few residents are dependent on the shifting ‘jhum’ agriculture. It remained largely unaffected by the widespread famine of 1958-59, caused by ‘mautum’, the bamboo death. While the rest of the region reeled under an explosion of rat population and the destruction of grains (which lead to a separatist struggle and the eventual formation of the Mizoram state in 1986), the then Assam administration made Biate a rice distribution centre.

Mizoram’s localities regularly compete with each other in terms of sanitation and beauty, either planting flowers, or decorating the roadsides. When Biate won one recent competition, they did so by only one mark. Their lead should have 10 or 20, said the community leaders half in jest, as the village that places second doesn’t segregate its waste. “The seed for sanitation isn’t sown in their hearts,” said the elders, unlike Biate where it is the fabric of their society.