The landlord reportedly thought that the worker was leaving with some borrowed money, and locked his wife and children in the store room. Raju (in the blue shirt) and his family along with members of the Punjab Khet Mazdoor Union outside the DC office in Muktsar Sahib demanding action against the landlord. Photo: Special arrangement

Chandigarh: Looking for work, Raju, a resident of Uttar Pradesh’s Firozabad district, came to Punjab along with his wife and two children in May this year.

So far, Raju’s story isn’t unusual; economic migration to Punjab from Uttar Pradesh and Bihar is nothing new. As per a rough estimate by economists and labour unions, more than 10 lakh workers arrive in Punjab during the paddy season, of which a majority leave after transplantation. A few stay back for the full season and get jobs in big farms.

A large section of the migratory labour force is also employed in Punjab’s industrial towns, Ludhiana and Mandi Gobindgarh.

Soon after reaching the state, Raju found a permanent job in the fields of a big farmer, Raghubir Singh, in the village of Khanne Ke Dhab near Malout tehsil of Muktsar Sahib district. Three months later, he left Raghubir Singh as he got better offer from another landlord, Papu Singh of Chak Chibbranwali village, some 30 km from Malout.

Papu Singh, according to local villagers, owns above 50 acres of land, even as the average landholding in Punjab is not more than nine acres, as per the 2015 agriculture census,.

“I agreed to join Papu Singh because he promised me wheat along with monthly wages. For a poor person like me, that was enough incentive,” Raju told The Wire over the phone.

While working with his previous employer, Raju had borrowed an advance of Rs 15,000. Before hiring Raju, Papu Singh paid off his debt and gave him a place to live in a temporary shelter in his fields.

What happened next, though, was something Raju and his family had not imagined even in their nightmares.

Also read: A Tea Garden Run By Its Workers: What Was and What Could Have Been

Raju said Papu Singh gave him Rs 2,000 to buy groceries the day after he joined work, in the last week of August. The next day, he took his wife and children to a nearby town to buy some necessities.

“To my surprise, Papu Singh reached there on his bike and started abusing us. He was under the impression that we were leaving the village. Without giving me a chance to explain myself, he took all of us to his home,” said Raju.

“Once we got there, he hit me many times and threw me out of his house alone, saying that my family will stay in his house. He said he will release them only after I pay him back the money that he gave me to pay the debt of my earlier employer.”

“I spent the next few days sleepless. My wife had a phone. I called her from some passerby’s phone and she told me that they were kept in a store room in the rear portion of the house and were not given food properly,” he said

He then said that he also called the police control room number at 112. “Two policemen came but did nothing. One of them told me what Papu Singh was telling me repeatedly – that I must pay the landlord in order to get my wife and kids back,” he said

“As I was seeking help from many people, someone asked me to meet local leaders of the Punjab Khet Mazdoor Union, who then helped me getting my family back with the help of local police,” said Raju.

Landlord denies allegations, no action by police yet

When contacted, Papu Singh told The Wire that the allegations against him are false and fabricated.

He claimed that Raju was a drug addict. “It was he who left his family alone in my fields. I brought them home as I thought they would not be safe there.”

He further added that he called Raju several times to take his family but he did not turn up.

Also read: ‘I Watched Them Electrocute My Brother-in-Law to Death’: Dalit Worker Who Survived Lynching

Sub-inspector Lovemeet Kaur, Station House Officer, Lakhewali police station, who has been handling the matter, told The Wire that the police have found no evidence so far to corroborate the allegations made by Raju and union members.

“Papu Singh handed over the family to us when we visited the family as he claimed that Raju left them on his own,” she said. “While we are inquiring about the matter, a committee has also been constituted by the SDM, Muktsar Sahib that is examining the matter under the Bonded Labour Act. We will take final call once the committee will give its report.”

When contacted, Swaranjeet Kaur, SDM, Muktsar Sahib, told The Wire that the matter is under consideration as the committee is yet to submit the report to her.

Nirmal Gorana, convener, National Campaign Committee for the Eradication of Bonded Labour, told The Wire that the problem of bonded labour is very serious in Punjab and Haryana, especially in agriculture and brick kiln units.

“Last year our NGO helped in the release of 63 migratory workers in Punjab through petitions in the Punjab and Haryana high court,” Gorana said.

He said the workers from UP and Bihar migrate to other states due to the failure of their respective state governments to provide them with adequate job opportunities. “But they often face exploitation at the workplace as well. They are kept in harsh conditions and not given adequate wages. In most cases, the matter does not come to light as the workers are too scared to file a complaint or they are silent because of the burden of the employer’s debt.”

Gorana said even in cases where the matter becomes public, local authorities do not respond proactively. 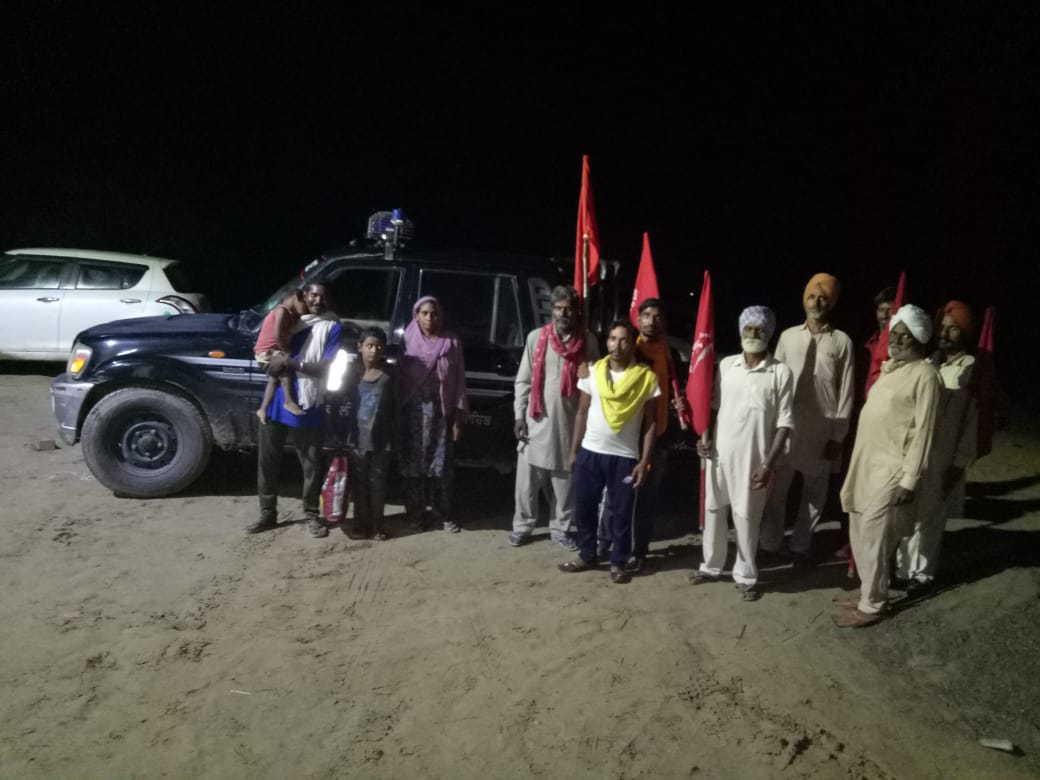 Raju was united with his family (left) after police intervention on September 3 night. Also seen in the picture are members of the Punjab Khet Mazdoor Union. Photo: Special arrangement

Raju’s case, he said, was a clear violation of the Bonded Labour Act,, since the employer did not allow his family to leave due to pending dues. The report of this case was supposed to be finalised in 24 hours and the victim and his family were required to be kept in a safe place, besides issuance of release certificate and compensation to the tune of Rs 20,000 under the Act.

“But due process, I believe, has not been followed yet in his case,” he added

On the other hand, R.S. Ghuman, professor of economics at the Centre for Research in Rural and Industrial Development, Chandigarh, is of the view that exploitation of migratory workers is not as serious in agriculture as in brick kiln units in Punjab.

“I don’t deny that incidents such as the one that happened in Muktsar Sahib occur, but they are not very common,” he added. This, he added, is because agricultural labour in Punjab is largely seasonal, and only a few big farmers hire permanent labour.

Kaka Singh, who is the block president of Punjab Khet Mazdoor Union which helped Raju reunite with his family, said that the role of the police and administration is dubious in this case.

“Soon after Raju approached us, we immediately filed a complaint to the deputy superintendent of police and the SHO. The police, however, did not take swift action. The SHO of the Lakhewali, we learnt, went to Papu’s house discreetly several times after our complaint.”

The police only took action after local media ran the story and highlighted the matter. Talking to a reporter, Raju’s wife confirmed that she and her children were not allowed to step out of the house, said Kaka Singh.

“But days have passed and there is no police case against the accused. We have no faith in the SDM-constituted committee,” he added.

According to Kaka Singh, there were several farm labourers who wanted to give their statement against the said landlord. But the committee was not proactive in recording the statements of anyone other than Raju’s family.

Tarsem Singh, another office bearer of the Punjab Khet Mazdoor Union, told The Wire that they will protest if there is no proper action against the landlord.

He said medium or small zamindars are sympathetic towards labourers in Punjab villages, but this is not the case with big farmers. “They still carry a feudal mentality  and treat labourers as a mere commodity,” he said.