The agitation, which was called off recently, shows how lakhs of women across India engaged in providing essential services have been neglected for years, with no end in sight for their troubles. Slogans of “Pakka kaam kacchi naukri nahi chalegi, nahi chalegi (being called an honorary worker while doing the job of a permanent employee is unacceptable to us)” and “Beti padhao, beti bachao- ka nara jhuta hai (educate your daughter, save your daughter – this slogan is a lie)” echoed in the surroundings of the District Commissioner (DC) Office in Sonipat and other locations around Haryana for four months until recently.

From December 8, 2021, the Anganwadi Workers (AWWs) and Anganwadi Helpers (AWHs), associated with the All-India Trade Union Congress and Centre of Indian Trade Unions, went on a four-month-long protest, until April 7, demanding the government heed to their demands. While sit-ins were held in Haryana, AWWs and AWHs from across the country extended their solidarity to highlight their abysmal working conditions. They braved harsh weather conditions and unfavourable circumstances.

Their cause was also supported by ‘fellow-brothers’ from the kisan andolan during this period. The Centre for New Economics Studies’ Visual Storyboard research team, over the last month, spoke to many protesting Anganwadi workers and unions supporting their protest against the government.

While most stakeholders under the ambit of the Integrated Child Development Services (ICDS) scheme participated in this andolan, it is essential to note that some AWWs and AWHs affiliated to different unions did not join. Despite their disagreement with the government, their unions did not allow them to take part in the protests. Some said they opted out of protests because of the well-being of the women and children who are the beneficiaries at their centres. An Anganwadi worker during a protest in Haryana. Photo: Jignesh Mistry.

“We don’t want to run away from the work, or be tardy. The government has paid us to perform these tasks, and we must be available for this, whenever needed,” said one such AWW who did not partake in the protest.

Underappreciated, AWW and AWH are grassroot workers who work towards maternal health and early childhood development. They are appointed as “honorary workers” despite they having to perform a plethora of duties. AWWs work with pregnant women, lactating mothers and children between the age group of zero and six years.

They are required to carry out door-to-door visits where they conduct surveys, engage in a dialogue with parents about child-rearing, run centres for the holistic development of children, among other things. They also sensitise locals regarding sanitation and immunisation activities. Meanwhile, an AWH fetches children to centres, handles water and sanitation requirements at centres and cooks meals for children and pregnant women.

While ICDS attempts to eradicate the rampant malnutrition and uplift the lives of women and children in India, it fails to honour the “honorary workers” who make it possible. Despite the intensive work and long hours that this role demands, they are only paid a nominal honorarium. Haryana, which pays the highest honorarium, offers Rs 11,000 and Rs 6,000 per month to AWWs and AWHs respectively. This amount does not meet the minimum wage criteria.

Considering economic inflation and the high cost of living, this minimal honorarium is not enough for them to fend for themselves and their families. “Everything is so expensive nowadays; why isn’t our payment adjusted accordingly?” commented an AWW at the protest site in Sonipat.

As a result, most AWWs and AWHs resort to additional jobs to make ends meet, which only adds extra pressure on them. What makes the situation worse is that often the government does not transfer the honorarium on time. 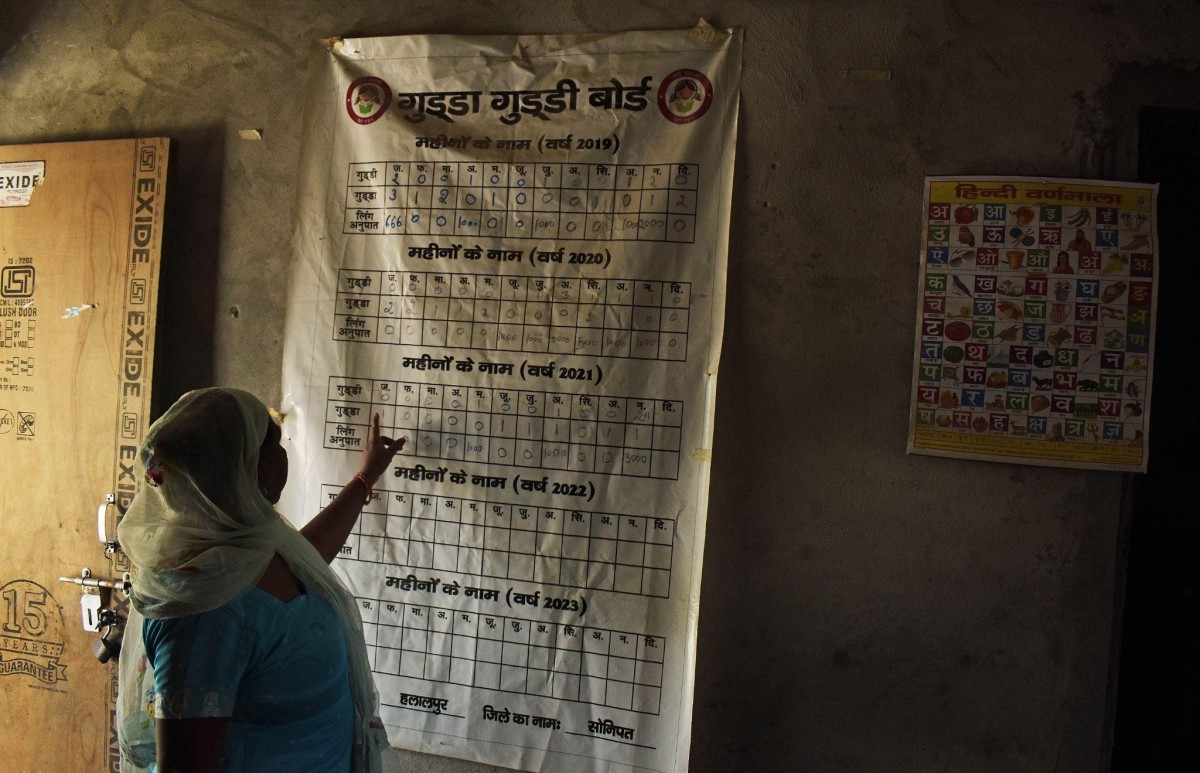 At an Anganwadi centre in Haryana. Photo: Jignesh Mistry

The ad-hoc payment system and backlogs have been a point of contention for a long time. Recognising this, during the live broadcast of ‘Mann Ki Baat’ in 2018, Prime Minister Modi promised a Rs 1,500 and Rs 750 hike in payment for AWWs and AWHs respectively. However, the amount has not been transferred to their accounts even after four years. Thus, false promises and a sense of betrayal gave impetus to the recent agitations.

Another aspect that has contributed to the issues faced by the workers and helpers is the budget allocated for the ICDS scheme.

In recent years, constant fluctuations have been observed; the allocated amount decreased to Rs 20,105 crore in 2021-2022 from Rs 20,532 crore in 2020-21. In the 2022-23 budget, it witnessed a slight increase to 20,263 crores, which amounts to a 3% increment. However, it is still not enough to support such a comprehensive and intense network of grassroot workers. As a result of this decrement, many AWWs and AWHs have also been laid off. For instance, 750 AWWs and AWHs were sent a termination notice in Haryana in 2021.

Protestors have correlated the issue of the government releasing several workers and helpers from their duties with the recent proposal of privatising the ICDS scheme. The Union government’s plan to transform the Anganwadi centres into playschools, which will be operated by non-governmental organisations (NGOs), has left AWWs and AWHs feeling threatened.

Also read: Watch | Why are Anganwadi Workers Calling out the Betrayal of the Modi Government

They worry that the NGOs would hire “more qualified” workers, leaving them without a job. They are also concerned about an outsider who is not well-versed with the cultural norms of the place coming into the community.

“We, ground workers, are a repository of knowledge in the localities we work. We understand the community because we are the community. We have managed to garner the trust of the people in our area,” observed an AWW.

Despite seniority and decades of service, AWWs and AWHs have been deprived of privileges and emoluments that government officials enjoy. Their status as “honorary workers” undermines the workload they have and its importance in the development of the country.

“We have fought many issues that plagued India – like malnutrition and polio. Despite all those efforts and long hours, we still are not given the status of a government employee,” said an AWW who has been working for 40 years now. The chief minister of Haryana, Manohar Lal Khattar, had promised to promote the status of AWWs and AWHs as ‘skilled and semi-skilled labourers’ respectively, during a Vidhan Sabha assembly. However, their status still remains unchanged. 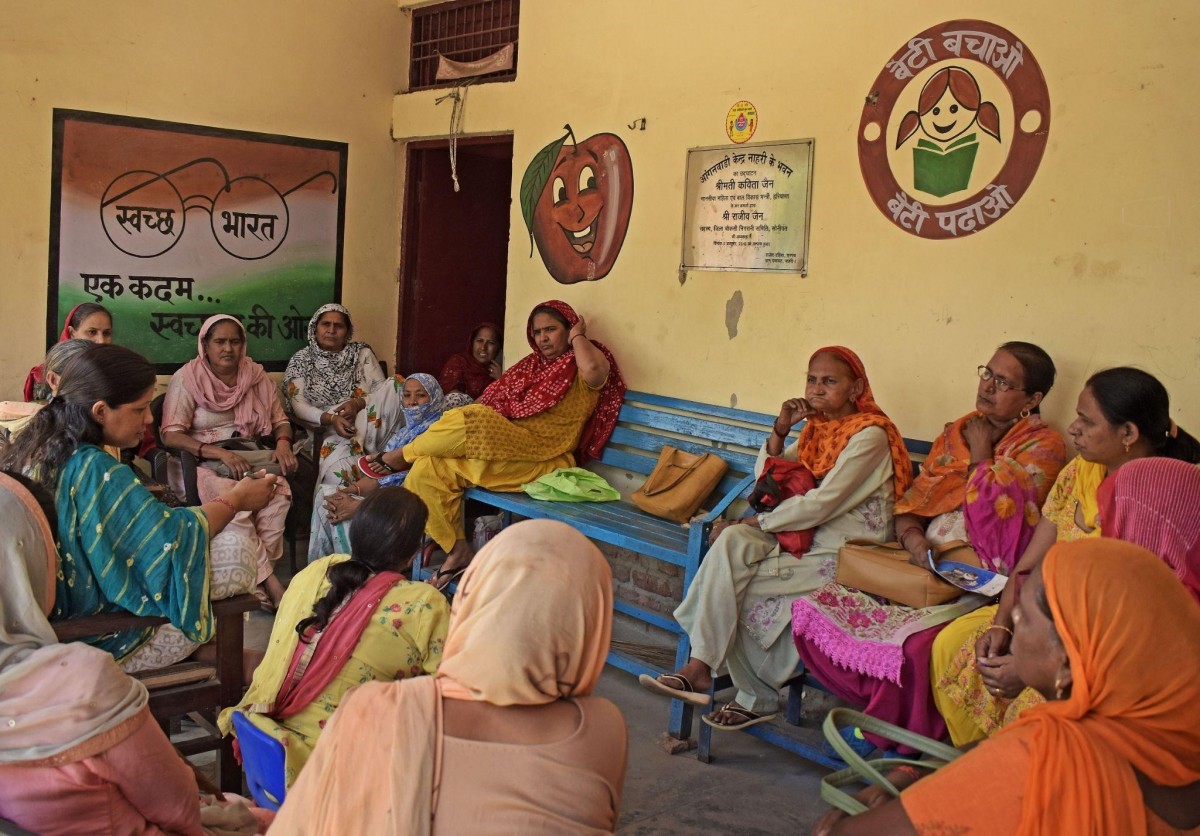 AWWs’ and AWHs’ work being undermined is a symptom of an established gender-based hierarchical system that relegates women to underpaid labour and unfair treatment. They complain that the prevalence of practices like the parda system reinforces patriarchal notions such as women being the nurturers. Hence, when women are appointed as AWWs and AWHs, their duties of caregiving are seen as activities that are inherent to their gender identities. This, in turn, leads to their work being underappreciated, and women being alienated from the decision-making process of their families and the workforce at large.

The protestors also mentioned their reservations against the government’s attempt to digitise and transfer the ICDS scheme online through the Poshan Tracker application. The government advertised this app as a one-stop solution that “provides a 360-degree view of the activities of the Anganwadi Centre (AWC), service deliveries of Anganwadi Workers (AWWs) and complete beneficiary management for pregnant women, lactating mothers and children”. While this initiative appears essential on paper, it fails to account for the digital inequalities that persist in India.

Often, AWWs and AWHs come from underprivileged socio-economic backgrounds, with limited educational training, and most do not have access to smartphones (we discussed this in context to another field study in UP focusing on the lives of ASHAs there). Most of them carry basic phones, which they only use for calling purposes.

Even in cases where they possess a touchscreen mobile with diverse functionality, they often lack the digital literacy to navigate through the application. Another issue with rapid digitisation is that procuring internet services is often expensive for AWWs and AWHs. The unreliable network service and the frequent power cuts add to the problem.

For the Poshan Tracker initiative to work, it would be imperative for the government to conduct training and capacity building workshops with AWWs and AWHs. However, the protestors shared their scepticism regarding this possibility as there has been a dearth of even basic amenities and resources for their work.

This includes a regulated water supply, uninterrupted electricity and a comfortable room with chairs to sit on, amongst others. “Our centre has been completely demolished because of the water damage. I lost all of my resources, like my registers, crayons, toys and posters. I will have to rent a room and pay for it myself. The government is not ready to support us,” said an AWW.

As it stands today, the andolan has been called off, with AWWs and AWHs going back to their centres and are in the process of carrying out some surveys.

They called off their protest after the government conceded to some of their demands while promising to pay the honorarium for the four months that they had been in protest.

When we spoke to a few workers, they said, “If the government fails to keep its promise within the stipulated time period, we will resume our protest. This is not a full stop; it is only a pause. Our rights and concerns matter!”

The authors would like to thank Dean Kathleen Modrowski from Jindal School of Liberal Arts and Humanities and Rajan Mishra for their kind assistance and support in making this study possible.