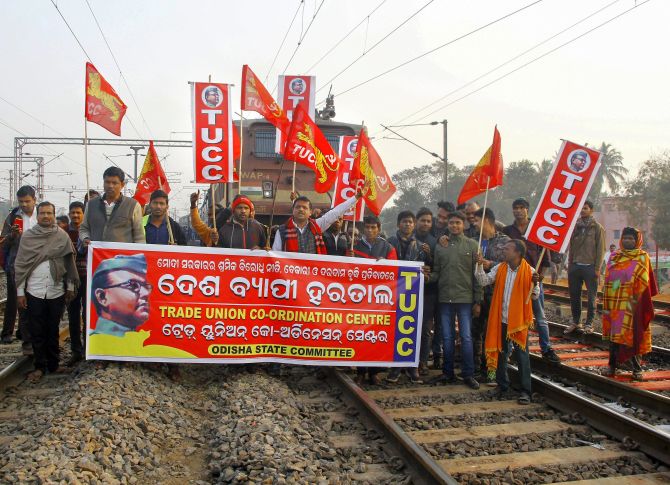 New Delhi: On Wednesday, ten central trade unions gave a call for holding nationwide protests on August 2 against the government’s move to introduce two labour codes in parliament, claiming that their objections to the draft laws were ignored totally.

The central trade unions in a joint statement also demanded the withdrawal of the two codes from the Lok Sabha.

The unions condemn anti-worker moves of the government and call upon the workers, their unions and federations, irrespective of affiliations, to observe August 2, 2019, with countrywide united protest and raise the demand to withdraw the proposed anti-worker legislations, ignoring all norms of international labour standards, the statement said.

The central trade unions also called upon the Members of Parliament to oppose the ruling party’s move.

They said that the government has made known its intention to codify various labour laws through an unconstitutional method of making it a part of the budget speech on July 5, 2019, ignoring the state jurisdiction of the concurrent list in the Constitution.

The government has introduced the Code on Wages Bill 2019 and the Occupational Safety, Health and Working Conditions Code Bill 2019 in Lok Sabha on July 23.

The unions said that the contents of both the Bills totally ignore all the points of oppositions and reservations on various provisions of both the Bills curtailing the rights of the workers, and are prejudicial to their interests raised by all the central trade union organizations.

Contrary to the claims by the Government, they said that these codes would enhance the process of exclusion of workers from the benefits they accrue from the existing laws, by simply raising the threshold level of the number of workers for application of those laws.

The wage code has denied the agreed formula of wage calculation as per the 15th Indian Labour conference (ILC), and has added on 25% as directed by Supreme Court judgment in Raptakos case and which was repeatedly and unanimously accepted by 45th and 46th ILC, it said

The Expert Committee appointed by the Central government, which excluded any participation from the trade unions to determine the methodology to fix the National Minimum Wage, also went against those recommendations, it said.

They said that Labour Minister, on July 10, 2019 unilaterally announced the National Minimum Wage as Rs 4,628 per month, when even the 7th CPC (Central Pay Commission) recommends Rs 18,000 per month as the minimum wages from January 1, 2016.

The Code on Occupational Safety, Health and Working Conditions Bill 2019 replaces 13 existing Labour laws, making it applicable to the establishments with ten workers. This keeps 90% of the workforce, which is from unorganised sector/informal economy sector, outsourced on contract. Furthermore, the home-based sector would be out of the purview of the code, it said.

Most of these laws were enacted to address and regulate the service conditions of different segments of workers and employees, such as sales promotion employees, mines, beedi, construction, working journalists and newspaper employees, in accordance with aspects relating their respective, widely varying occupation specificities.

By repealing all these Acts, selectively incorporating only the provisions advantageous to employers and grossly diluting and tampering the provisions pertaining to rights and protection of workers, the Government seeks to drastically curtail the workers’ rights and make them obedient servants of their corporate masters, it added.

This is a clear indication of how undemocratically the BJP Government will work, in spite of all the declarations of Sabka Saath and Sabka Vishwas, it said.