The death of two workers at Anna University contravened no law because the laws are particularly blind to occupational safety at small enterprises. 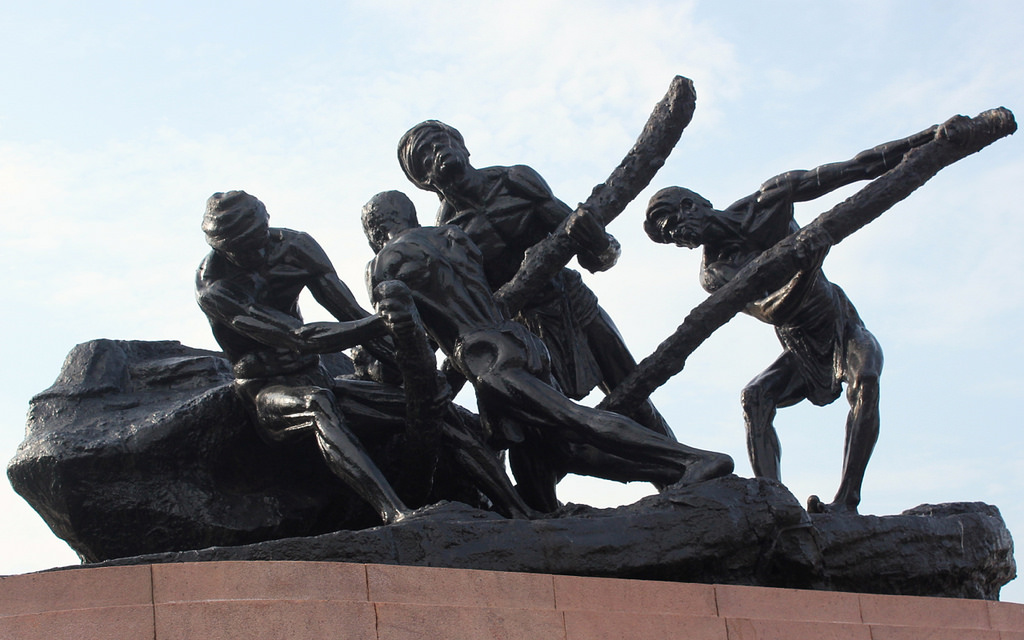 The triumph of… labour? A tributary promenade on Marina Beach, Chennai. Credit: nagarjun/Flickr, CC BY 2.0

On June 21, 2016, two young men died. Their bodies were found in a tank at the Anna University campus in Chennai. They were employees of a subcontractor who had been hired to seal the tank with rubber to prevent any leakage of air. The tank was being constructed as a part of a project by the Ministry of Renewable Energy to explore the possibilities of using compressed air to store energy. The two workers, Ramesh Shankar and Deepan, had arrived at the site at around 11.30 am and begun work. By 3.30 pm, when they were pulled out of the tank, Deepan was dead and Ramesh Shankar, while still breathing at the time, died a few minutes later.

According to statements from the university and the police, it seems that Shankar and Deepan had been working with two chemicals, silicone and toluene. Toluene is a solvent derived from benzene. While less harmful than benzene, inhaling or ingesting toluene can cause serious damage to the nervous system and even be fatal. Despite the confined nature of the tank, with only a solitary opening right at the top, the two men were given no safety gear and no supervisor from either Anna University or their employer, Kavimeena Rubber Products, was standing watch. Subsequent investigation by a team of labour activists found the situation to have been “lethal right from the beginning”.

The needless tragedy of the two deaths is mirrored by the tragedy that is the state of the laws and public institutions set up to deal with incidents such as these. There are sixteen laws (and a dozen or more boards, directorates, inspectorates and other bodies) that deal broadly with the subject of working conditions and occupational health and safety (OHS) in India. But despite this seeming glut, the circumstances that led to the death of Shankar and Deepan seem to have contravened no law at all.

Like most such deaths, this one too was easily reduced to a question of compensation. U. Lakshmikanthan, Deputy Commissioner of Labour, stated that after reading the media reports on the deaths, he suo moto initiated a complaint, summoning representatives of the university and the employer to his office. But his intervention was only to adjudicate on the amount of compensation that would be paid to the family of the deceased as per the statutes of the Employees Compensation Act 1923 (formerly called the Workmen’s Compensation Act 1923). This Act discusses the terms on which compensation will be paid by the employer in the event of the death or disability of an employee. It doesn’t have anything to say on questions of occupational health in the strict sense. Lakshmikanthan did not disclose the compensation that had been decided but the maximum allowed under the law is approximately Rs 11 lakh.

The Directorate of Industrial Health and Safety (DISH), which is involved with the inspection and investigation of working conditions, reacted quite differently. P. Bose, the director of DISH, stated that after a preliminary investigation, it was decided that the case did not fall within his purview. It didn’t come under the Factories Act 1948 as Kavimeena Rubber Products employed less than ten people and the incident happened outside the manufacturing premises. It also wasn’t covered by the Building And Other Construction Workers (Regulation Of Employment And Conditions Of Service) Act, 1996, because – again – more than ten workers were required for the Act to apply as well as the fact that the cost of construction had to be more than ten lakh rupees.

Change in the nature of labour

The qualifying limit of ten employees is ostensibly to decrease the regulatory or compliance burden on small enterprises. But this has the effect of placing a large amount of the Indian workforce outside the purview of these legislations. And this isn’t a new development by any means.

A Planning Commission report on Occupational Health and Safety for the 12th Five Year Plan (2012-2017) remarked that, “Occupational Health and Safety cover for the unorganised sector can well be said as non-existent”. The report, which focused primarily on the conditions of mines and factories, acknowledged that “except a few pilot surveys in some of the segments of the unorganised sector no authentic statistics at the national level are available on accidents and occupational diseases in these segments”.

This is a disturbing state of affairs because in India “more than 90 per cent of workforce and about 50 per cent of the national product” comes from the informal sector, according to a report by the National Statistics Commission in 2012. But it isn’t just the unorganised or informal sectors that have hazy data. The Director General, Factory Advice Service and Labour Institutes (DGFASLI) displays statistics on its website regarding the total number of factories, factory workers, medical officers and accidents that have taken place. Their values reported in 2012 showed a decreasing trend of accidents and fatalities, which would normally be a positive matter but their data also shows a decrease of about 1.4 million industrial workers in 2012 as compared to 2009.

If these numbers are correct, India’s industrial workforce is decreasing alarmingly – or it is moving to sectors that aren’t covered by the DGFASLI. These sectors might have even higher accident rates that are going unmeasured.

The National Policy On Safety, Health And Environment At Work Place drawn up by the Ministry of Labour and Employment in 2009 stated that, “the changing job patterns and working relationships, the rise in self-employment, greater sub-contracting, outsourcing of work, homework and the increasing number of employees working away from their establishment, pose problems to management of occupational safety and health risks at workplaces.” This change in the nature of labour is what has been exposed by the tragedy on June 21.

The International Labour Organisation (ILO) statistics from 2003 claimed that 403,000 people die from work-related problems in India. This translates to about 46 people dying per hour. No updated statistic seems to be available. Per the ILO website, India has only ratified five conventions on occupational health and safety; more than 12 are pending. This includes convention 155 that discusses the fundamental tenets of an occupational health and safety policy that a country must implement.

There is even an economic angle for improving working conditions. The loss of productivity and subsequently revenue, directly and indirectly, due to injuries and accidents in the workplace has been quantified in countries like China to be to the tune of $38 billion.

Articles 39 and 42 of the Directive Principles of State Policy in the Constitution extort the government to ensure the health of workers and to make provisions for securing humane working conditions. But sadly the government’s appetite for labour reforms has been sadly one-sided. M.M.K. Sardana, in a paper on OHS for the Institute for Studies in Industrial Development, a body that advises the government on industrial policy, raises the point that, “though for argument’s sake, the Directive Principles may not be enforceable, any acquiescence by the State towards negating the directive principle would be hard to justify legally; however, such acquiescence may be economically rewarding.”

The Planning Commission report mentioned earlier concluded by calling for legislation in line with its findings – a ‘Safety and Health at Work Act’ that has never materialised. Maybe it is time for one.

Thomas Manuel is a freelance writer and playwright based out of Chennai.