Workers from the start-up took to Instagram to document how seniors in the company reportedly routinely harassed them. 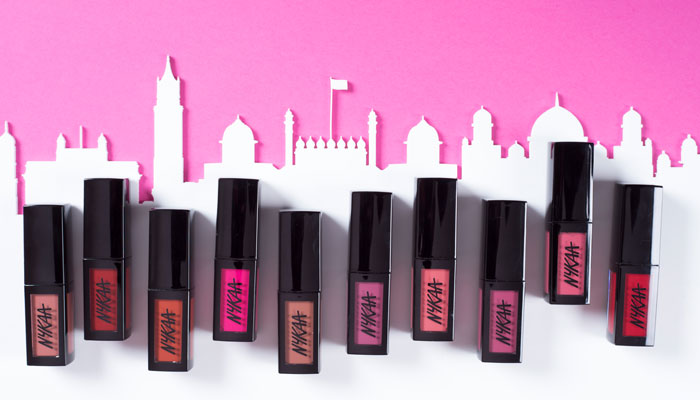 An ad for Nykaa products. 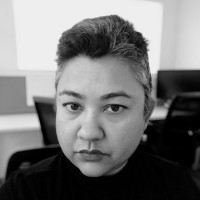 “Riot is the language of the unheard.”
∼ Martin Luther King

Imagine a group of rioters who decide enough is enough and take to the streets. Armed with water, high protein snack bars, protective face masks and anti-riot gear. Meeting up with others, marching onwards to join even bigger crowds. A collaborative effort between total strangers who chant together, their outrage growing louder. Slowly building up to a crescendo, from a low hum to a roar. Loud enough to reach the corridors of power from the streets below.

Now imagine this happening online. You’ve been witness to many such riots of the unheard.

Online dissent looks like Twitter storms, trending hashtags, memes, call outs and cancellations. This is the newest form of resistance. And no one is immune to this. Not even the leader of the world’s biggest democracy, Prime Minister Narendra Modi, and the leader of the free world, Donald Trump.

The latest in a long line of Gen Z battles is being waged on Instagram. The geopolitical location of this is the popular Instagram handle Diet Sabya. Its aim is to drive conversations around social justice in the fashion and beauty businesses.

The handle calls out plagiarism, talks about how cultural appropriation has become a buzzword with Bollywood stars and more, all sprinkled with industrial levels of snark or dankness if you’re really with it.

This time, the needle of accountability has been pointed at India’s beauty e-commerce giant, Nykaa. A a few screenshots have lit the match on a heap of unresolved trauma, courtesy a toxic workplace culture – an alarming norm for startups.

The sheer barrage of user-generated experiences – talking about toxic colleagues and bosses – that came as a response has warranted an entire folder of screenshots in the story highlights, titled “Harassment”.

The stories are largely from women complaining of slut-shaming, body shaming and name-calling by women bosses, a few instances of sexual harassment by male colleagues, and inappropriate behaviour with one employee even stating a trend of disturbing party games. And names are being named. Not just of companies, but people.

The Wire reached out to Diet Sabya for more insights into their verification process.

“We don’t report on whims. We make sure the people telling us their story have got the timelines/facts/information right. Most times we will cross-question to make sure that accurate information is being put out. Having said that, most stories you see have multiple people flagging it. These are repeat offenders. It’s seldom based on one person’s account.”

The voice of the Instagram account is clear, “Diet Sabya is not here to pass judgments, we are here to report-at-large and be a voice for the people. For far too long, we as a culture have normalized workplace harassment and micro aggressions. It’s time for a shakeup!”

In the age of the internet reviewing, Gen Z is taking the culture of app reviews, restaurant reviews and product reviews to the management. Admittedly, it’s going to take more than a one-star ratings on Glassdoor, a website where current and former employees anonymously review companies, to bring about real actionable change and the reinforcement of Prevention of Sexual Harassment guidelines at the workplace, but internet trends are exactly what they are. The voice of the people, by the people, for the people.

The Wire tried to reach the author of the original screenshots posted by Diet Sabya, but the Instagram account was unwilling to disclose who they came from.

Another former employee was contacted by The Wire. On the condition of anonymity, she said that due process was not followed after she quit. 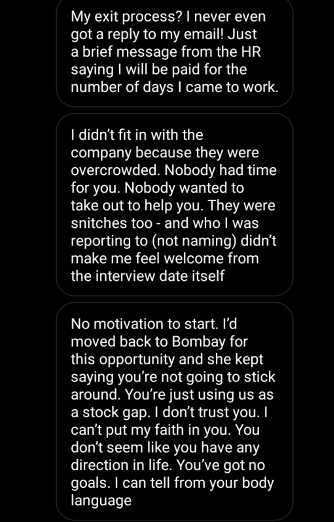 What the former employee said.

The Wire also received an official statement from the Nykaa communications team. 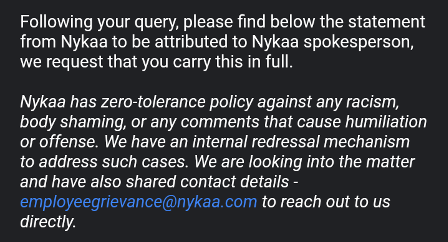 Former employees, though, were not pleased with this response. One of them, Priyaa Chettri, immediately called the organisation out for not contacting her directly as one of the complainants. But the larger question is, who is to be held accountable behind the iron curtain? Can employees expect the structural implementation of policy or will they have to continue to dissent online in a bid to be heard?

Workplace culture often translates into a big boys club of founders and their inner coterie, of Friday fun with beers and popcorn on the house but very little done in terms of real labour beyond the cosmetic. The upstairs and downstairs colonial patterns are often still very much in place, despite the “flat organisation” and the back-slapping.

Startups have often come under fire for their toxic “bro culture”; now they seem to have given rise to an increasing number of female bosses who perpetuate the same patriarchal policing on women colleagues lower on the corporate ladder, especially in the beauty business. This shift has been seen in corporations across the world.

The universal trend seems to be one where boundaries are crossed almost daily. A cult-like following is encouraged, coerced through playing favourites, the odd offsite and happy hours thrown in. The fanboys and girls are often on their first job, made to work bone-crunching 12-hour shifts, usually seven days a week. Their consent is manufactured with fancy designations.

While inclusion policies on paper may be there, there is little to no proper sensitisation on the ground. Sexism, homophobia, racial biases, etc. permeate into daily interactions.

Priyaa Chettri detailing what happened to her at Nykaa.

The stories from Nykaa are reminiscent of racism faced by black, indigenous and people of colour in predominantly white-led organisations, which led to Adam Rapoport, editor of Bon Apetit, stepping down after assistant food editor Sohla El-Waylly posted a statement about pay inequity between people of colour and white employees on her Instagram story. The fight continues on her behalf, with online voices rallying behind her.

Harassment continues in the pandemic

Shifting working styles and increasing work from home options and hybrid models are being adopted because of the COVID-19 pandemic. But has physical distancing led to less abuse? Not really, going by a recent story of an employee of education startup Byjus that went viral.

The sword of financial bullying has hovered over employees’ necks long before the pandemic. And the usual crossing of boundaries in the guise of fun and games continues. Cake being smashed into the face at birthday celebrations has given way to enforced and tedious Zoom cocktail hangouts.

Being tethered 24×7 to the office WiFi means minimal work-life balance and maximum surveillance. Abusers adapt to changing ecosystems. But till enforcement of protective measures happens, there’s always internet protest to rely on.

Nina Sangma is an independent writer who writes on culture and designs content marketing campaigns for brands. She has worked as copywriter, television news producer, editor and brand strategist for over 14 years in radio, TV and digital media.