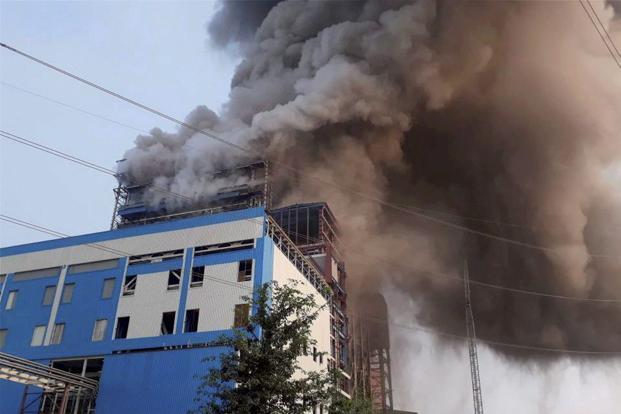 The blast occurred in the boiler area of a recently commissioned 500 MW unit at NTPC’s Unchahar plant in Raebareli district of Uttar Pradesh. Photo: PTI

The horrific accident at the National Thermal Power Corporation (NHPC) Plant in Oonchahar (Rae Bareli district of Uttar Pradesh) on November 1 has already claimed 29 lives, with over 100 scalded and injured workers and other persons being treated in hospitals.

The National Human Rights Commission (NHRC) has issued a notice to the Uttar Pradesh government, saying that a “high-level probe into the matter is immediately required to ascertain the negligence and errors, if any, behind the incident which involves the right to life”.

The commission said that there was a need to ensure such tragedies do not recur. Workers who held a demonstration the day after the accident have alleged that the NTPC commissioned the new 500 MW Unit 6 in a hurry and in the process safety measures did not get adequate attention. One explanation that has been given is that blockages in a flue gas pipe in the 500 MW boiler led to a blast that let out hot flue gas and steam.

On November 4, quoting unidentified senior government officials, Asia Times reported that “negligence and the violation of established safety procedures” were likely the key causes behind the blast.

However, beyond purely technical explanations, we need to look at factors relating to negligence – a demand voiced both by workers and the NHRC. Boiler mishaps are one of the most common industrial accidents. Industrial labour expert Reinald Skiba has written in a paper titled ‘Theoretical Principles of Job Safety’ that “causes of an accident involving a burst boiler may include one or a combination of the following reasons: faulty materials in the boiler wall, inadequate training to ensure safe operations, failure of a pressure relief device, or violations of an operating procedure such as overheating. Without one or more of the deficiencies the accident may not have happened”.

Skiba adds, “In the final analysis, every accident results from faulty conduct of people, because people are always at the end of the causal chain. For example, if faulty material is determined to be the cause of a boiler bursting, then improper conduct existed either on the part of the builder, manufacturer or tester, installer or owner. Strictly speaking, there is no such thing as a technical failure or technical accident cause. The technology is only the intermediate link to the consequences of the improper conduct.”

Beyond the NTPC accident, there is also a need to bring down workplace or occupational accidents in India. Even the first step of knowing in a credible way the number of occupational accidents as well as deaths and serious injuries linked to these has been neglected to an alarming extent. As workplace accidents are understated to a huge extent, the wider realisation for major steps and matching budgets to improve workplace safety is missing in India.

To understand the seriousness of the issue of workplace safety, let us take a look at world-level data. Writing in the Encyclopedia of Occupational Health and Safety, Jorma Saari has provided an overview based on International Labour Organization (ILO) data. To quote, “120 million occupational accidents occur annually at workplaces worldwide. Of these 2,10,000 are fatal accidents. Every day, more than 500 men or women do not come back home because they were killed by accidents at work.”

Pointing to the high risk from occupational injuries, Gordon S. Smith and Mark A. Veazle have written in a paper titled ‘Principles of Prevention-the Public Health Approach to Reducing Injuries in the Workplace’, that “one out of three nonfatal injuries and one out of six fatal injuries to work-age persons in the United States occur on the job. Similar patterns apply in most of the developed countries. In middle and low-income countries, a rapid and relatively unregulated pace of industrialisation may result in a nearly global pandemic of occupational injuries.”

Comprehensive estimates of all occupational accidents, fatalities and injuries are simply not available in India, but what we know is that accidents have been painfully high for a long time in sewage work, several kinds of mining, chemicals and explosives and ship-breaking. At the same time, some work areas not considered hazardous earlier are now becoming risky, as seen in the alarmingly high pesticide poisoning cases in the farms of the Vidarbha region. As the pressure of speeding up work has increased in several industries, accidents have also increased. Modernisation planning in many areas is guided increasingly by profits rather than safety.

A study of safety in Gurgaon Manesar industrial belt in 2015 by SafeIndia and Agrasar revealed that nearly a thousand workers experience serious accidents in the belt in a year, most of which result in permanent disabilities. In one accident, an industrial robot killed a young worker. A worker stated that in any factory, one can find ten workers with broken fingers.