Despite official assurances, educationists fear whether Agniveers will be equipped enough to get into a future Masters course or secure jobs. 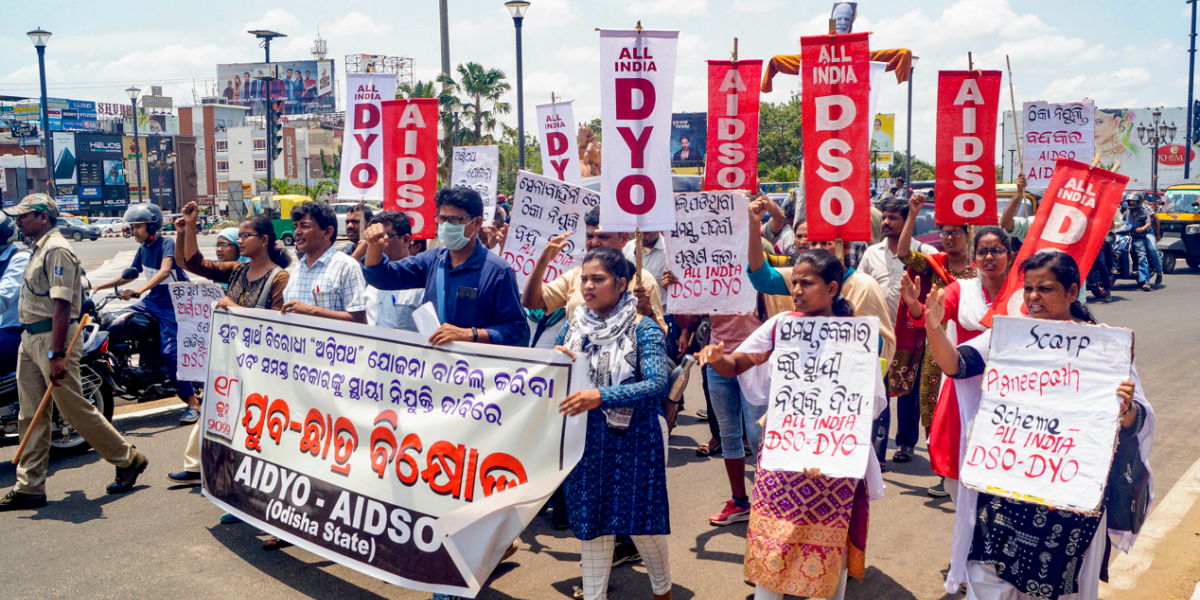 New Delhi: Even as protests continue for the fourth consecutive day against the Agnipath scheme, some academics have raised concerns over the ability of the three-year degree programme being offered to Agniveers to help them secure jobs outside the force. This aspect is crucial because only 25% of the total annual recruits will be allowed to continue for another 15 years under permanent commission.

When the Agnipath scheme was announced, the Union government said that it will provide a special three-year skill-based bachelor degree programme for serving defence personnel to improve the Agniveers’ future career prospects and equip them with various job roles in the civilian sector.

“Under this programme that has been designed by IGNOU [Indira Gandhi National Open University] and will also be executed by them, 50% of the credits required for a graduate degree will come from the skill training – both technical and non-technical – received by the Agniveer, and the remaining 50% will come from a basket of courses that cover a wide variety of subjects like languages, Economics, History, Political Science, Public Administration, Sociology, Mathematics, Education, Commerce, Tourism, Vocational Studies, Agriculture and Jyotish, as also Ability Enhancement Courses on Environmental Studies and Communication Skills in English,” the government said.

Further, it was announced that this programme would be aligned with the norms of the University Grants Commission(UGC)  and with the National Credit Framework/National Skill Qualification Framework (NSQF) as mandated under the National Education Policy 2020. The programme also offers multiple exit points – undergraduate certificate on successful completion of the first year courses, undergraduate diploma on successful completion of the first and second year courses, and degree on completion of all the courses in a three-year time frame, the government said in its press release.

Union home minister Amit Shah in June 15 said that the retiring Agniveers would get first preference for recruitment into the Central Armed Police Forces (CAPF) and Assam Rifles.

“Agneepath Yojana’ is a visionary and welcome decision of @narendramodiji for the bright future of youth. In this context, today the Ministry of Home Affairs has decided to give priority to Agniveers who have completed 4 years under this scheme in the recruitment of CAPFs and Assam Rifles. #BharatKeAgniveer,” he wrote on Twitter.

However, despite official assurances, job aspirants and educationists believe that the scheme is ‘flawed’ and not thought through well. They have raised questions around the future of those Agniveers who are finally not absorbed into the armed forces.

What is the credibility of the course?

Anita Rampal, former Dean of Education at Delhi University, spoke to The Wire about the various shortcomings in the scheme and the degree course being provided with it. “One, there is no guarantee of jobs and we do not know what is going to be the nature of this course. Just giving some subjects and saying half of the course would be conducted through an open university, raises questions about its reliability. What is the credibility of that course, no one can say.”

She also spoke about how it is always challenging for any university to start a new course. “For instance, Delhi University had designed a four-year course for Bachelor of Elementary Education. It was unique because there was no course at that time for teachers who specialised in elementary education.

However, those who undertook this course faced many challenges. “It took us more than 25 years to absorb the teachers who did this course in Delhi government schools. The recruitment rules did not recognise the course until last year. This was demoralising for the students who pursued this course from the Delhi University but did not get recruited as a trained graduate teacher (TGT). Only last year they began accepting them as TGTs.”

A lot at stake for Agniveers and the armed forces

The former dean cautioned that there is a lot at stake for the young trainees who would be seeking job opportunities through the Agnipath scheme. “They will be joining these courses straight out of school and at a very young age, believing there will be some avenue for employment later as well. But their probability of going beyond three years would be very low – 25% or less. So it would amount to playing with their aspirations and trust in whatever they are doing.”

When asked whether these trainees would be better off pursuing other courses, she said, “It depends on their economic status and their urgency to start earning money. But it would be quite devastating for most of them to be chucked out at age of 21 and very disheartening because they would not know what they are capable of and who would be looking for them. Then they will be out again in a very uncertain world.”

A professor at the Delhi University and columnist, Apoorvanand, questioned the logic behind the Agnipath scheme. “Is there any logic behind this, one must ask. It is an as ill-thought move as demonetisation. I think the scheme is not thought through or there is an evil thought behind it. People are expressing the apprehension that they want to create an army of youth with arms training who can be used later.”

On formal recruitment of only 25% of the trainees into the force, he said: “No component of this scheme is rational. They are only giving some details to convince others. They want others to believe that they have thought about the scheme and they have divided it into various sections so that people are persuaded that some thought or a lot of thinking has gone behind it.”

Saying that all veterans are criticising the scheme as they do not support the idea and feel it will only create chaos, he said, “What the government is doing is that like all other institutions they are destroying and dismantling the institution of armed forces. I do not see it in isolation. I see it together with what they are doing everywhere. They are just creating chaos – in economy, in social relations and now in the armed forces.”

On the perceived benefits of the scheme that it would reduce the burden of pension on the armed forces and consequently the exchequer, he said, “What they are doing is economising. They do not want to take the liability. This will only weaken the armed forces.”