New Labour Codes: After Rushing Them Through Parliament, Why is the Govt Delaying Implementation?

The potential political backlash of implementing these codes could be causing the government to hold off until after the crucial assembly elections in Uttar Pradesh next year. 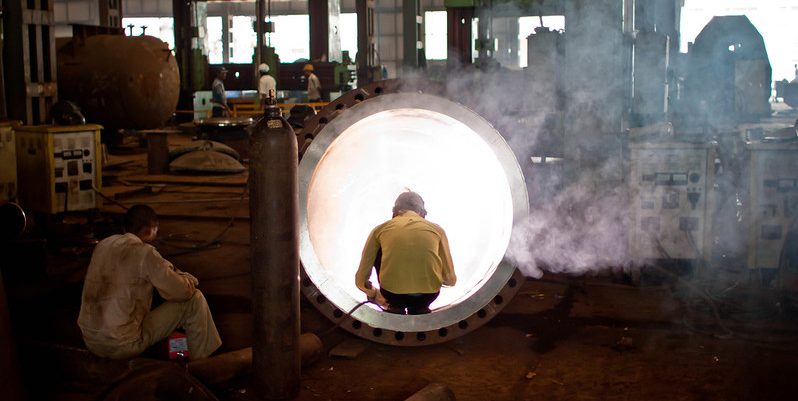 Labourers and their livelihoods are being made political pawns in this anti-worker, anti-farmer and anti-people regime. Photo: Flickr/Jay Hariani (CC BY-SA 2.0)

Despite pitching the new labour codes as “big reforms”, the Union government seems wary of implementing them, seeing as they may anger the working class and cause an electoral backlash. One recent media report claims that Union government may not notify the rules until after the crucial Uttar Pradesh assembly elections next year.

The implementation of the four controversial labour codes – which have been facing heat for allegedly being against the interests of the workers – has already been postponed for the four times by the Modi government. In June, the then-labour minister Santosh Gangwar had laid the blame for the delay on the pandemic and state governments and had claimed that the codes would be implemented by October 1, but that deadline will not be met either.

Interestingly, there was no such delay when it came to the hasty passage of these codes (just like the three anti-farmer legislations) in Parliament; they were passed without any dialogue, debate or consensus-building among the stakeholders.

What could be the reason behind this constant delay in implementation on the one hand and the hurried, undemocratic passage of these codes on the other?

One important issue in this regard is that, in principle, many of the provisions contained in these four codes have already been in practice ever since the Modi government came to power in 2014, implemented through various back-door measures, new schemes and legal amendments to existing laws. Some would say that there has been a full-fledged capture of the labour market with the contractualisation of almost of kinds of works across industries and enterprises.

Specific changes have also been made. For example, the 2014 amendment to the Railway Apprentice Act, 1961, gives the employer the right to form the rules of employment. This could now prevent the entry of trained apprentices in the railways in the name of open market recruitments and further the parallel agenda of the privatisation of the railways and other public enterprises. These changes, in themselves, would lead to further retrenchments, unemployment and insecure job markets.

The prior implementation of such flexible labour norms in some states like Rajasthan and Gujarat have already shown dangerous impacts on worker’s incomes, welfare, employment and security trajectories.

The essence of the four codes, therefore, is already well in practice, irrespective of subsequent rule making processes and official implementation. What’s more, the overall neo-liberal regime of increased privatisation, contractualisation and informalisation got given legal sanction by the passage of these codes in the two houses of parliament.

Apart from being misplaced and ill-intentioned, the drafting of the codes by the Union government also demonstrates acute legal and practical incompetence and inadequacy. Even the provisions that could provide protection to a section of workers are replete with ambiguity, laxity, and arbitrariness; both in substance and wording. Provisions are crafted in a manner that would make them difficult to implement and would lead to unnecessary complexities in the rule making process for states.

Such laxity is also intended to benefit the employer, maintaining scope for open and favourable interpretations and the possibility of bypassing the laws wherever required.

For instance, the government has deployed several ‘loose’ references while writing the rules which place the onus of laying out specific provisions on various agencies. This is reflected in places where the code says, “the details or provisions of ‘x’ clause:

In 2017, the Satpathy Committee had already recommended a minimum wage of Rs 375. Why has the Union government, then, notified the commission of an advisory board for minimum wages under the Wage Code? Notably, the proposed ‘starvation wages’ – a term used for the national floor for the minimum wage under the new code – is a paltry Rs 178.

On one hand, the finance minister, in her budget speeches and elsewhere, has announced scheme after scheme for micro, small and medium enterprises (MSMEs), self-employed workers and informal workers. On the other, the entire country has witnessed multi-fold attacks on these very sectors and players in the form of overnight, thoughtless and mega-disastrous decisions such as demonetisation, unprepared GST roll out and the sudden lockdown announcements during health and economic emergency that is the COVID-19 pandemic.

As if all of this was not enough, the codes now officially attack these vulnerable sectors by legally allowing companies with up to 300 workers to lay off and retrench the workers without seeking prior approvals or facing any penalisation. Earlier, only companies who had up to 100 workers could do this. With this increased threshold, 74% of industrial workers are left without safeguard.

The ‘300 worker’ cap is facetious in itself, considering that reasons like increased mechanisation have made sure that most companies now function with fewer than 300 workers.

Similarly, the social security code, which boasted of providing universal coverage to all workers, leaves out all establishments employing fewer than 10 workers, again excluding a large chunk of informal workers and enterprises. There is a clear exclusion of construction workers deployed at the level of private households, home-based and domestic workers, sanitation workers, self-employed workers like street vendors, scheme workers like the ASHA and anganwadi workers and so on.

Ironically, workers from these sections are the “frontline workers” in praise of whom the Prime Minister gave long speeches. But these workers also had to face the worst impacts of the pandemic and have even had to work without wages.

Also read: With New ‘Industrial Relations’ Code, What Does the Future Look Like for India’s Trade Unions?

The code on industrial relations also makes it next to impossible for trade unions to be registered, recognised and even call strikes. This, along with other restrictions in the judicial review processes reminds one of the draconian British legislation, the Rowlatt Act, which inspired the infamous slogan: “No appeal, No Wakeel, No Daleel”. Today, we are witnessing one of the worst periods for labour and human rights activists in India.

It is clear, therefore, that the delay is intentional; the Union government has realised that there would be a huge political ramifications if these four “anti-worker” codes are implemented before the upcoming assembly elections.

The situation mirrors one with the Yogi Adityanath government back in 2017. In the lead up to the assembly elections, Adityanath had promised job security to over 1.5 lakh Shiksha Mitras (guest teachers) in UP by converting them to “assistant teachers” once he came to power. That would have increased their earnings from Rs 3,500 to Rs 39,000 per month. However, he immediately stabbed them in the back after he won.

Five years later, empty promises of salary hikes are being made once again. These labourers and their livelihoods are, once again, being made political pawns in this anti-worker, anti-farmer and anti-people regime.