Rajasthan: Migrant Workers Beaten up by Employer's Contractor for Attempting to Walk Home

The workers alleged that they were being denied their salaries. Their applications to return home on the Rajasthan government's e-mitra portal for stranded workers, were also pending.

Migrant workers from Jharkhand at the HNV Company in Neemrana. Photo: By special arrangement

Jaipur: Even after the government announced the lockdown on March 25, migrant workers from Jharkhand, who worked at the HNV Company in Rajasthan’s Neemrana, decided not to attempt to head back to their homes believing things would get back to normal.

During almost two months of lockdown, the workers somehow managed with the payment they had received for working nine days in the month of March, before the lockdown.

When the company started its operations on May 4, these workers got back to work and demanded their pending salaries for the month of March and April but didn’t receive any assurance from the company’s side. “The work had not properly started, we worked only for a few hours, that too, in limited numbers. It didn’t look like the factory was in a condition to make money,” Gautam Vishwakarma, a migrant worker from Jharkhand working in the HNV Company told The Wire.

Lack of assurance compelled the workers to register themselves on the e-Mitra portal of Rajasthan government meant for stranded citizens. In the week that followed, the workers kept on waiting for the government’s response to their registration, and their salaries, but nothing arrived.

The workers then refused to work and urged the contractor to send them back home. “The contractor didn’t listen to us and even asked the ration shopkeeper to not give us ration,” he added.

Fed up with their condition here, the workers planned to walk to Jharkand on May 12. “We asked our families to transfer us some money so that we could walk back. We purchased some ration to eat on our way and started at around 7 pm,” said Surendra, another migrant worker from Jharkhand.

When the workers had walked for about 30 kilometres, they began to receive calls from their contractor and his men. “We didn’t pick up for some time but they kept on calling us,” he added. 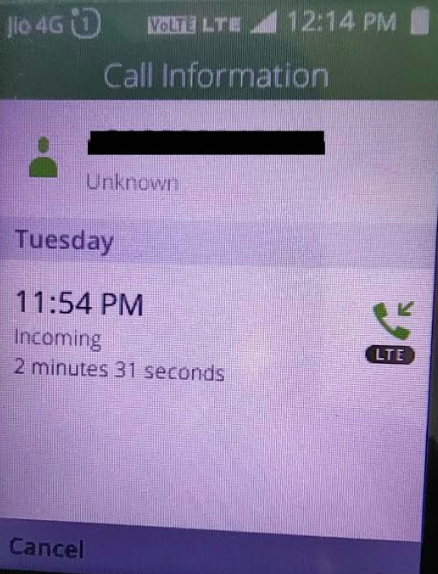 Finally, one of them picked up the call. It was the contractor’s man Bijendra Singh on the line. He told them to disclose their location so that he could tell them the route to Jharkhand. Believing him, they disclosed their location.

“It was about 12 in the night. We were somewhat lost in the dark so we thought it would be good if Bijendra could guide us,” said Vishwakarma.

According to these workers, within minutes of speaking to Singh, the police arrived at the spot.

“They came shouting at us and started hitting us with lathis. The police tortured us for about three hours. One of us was hit on his head and he began bleeding,” he said.

The workers were then shifted back to their rooms near the company premises in Neemrana.

There, they said, the contractor and his men were waiting for them. “As we reached, even they started to hit us,” said Vishwakarma.

“They told us ‘such things’ happen sometimes so it is better to compromise and assured us that if we won’t complain, they would arrange for a bus for us to go back to Jharkhand,” he said.

However, the company didn’t keep its promise and the workers are still waiting to go home. 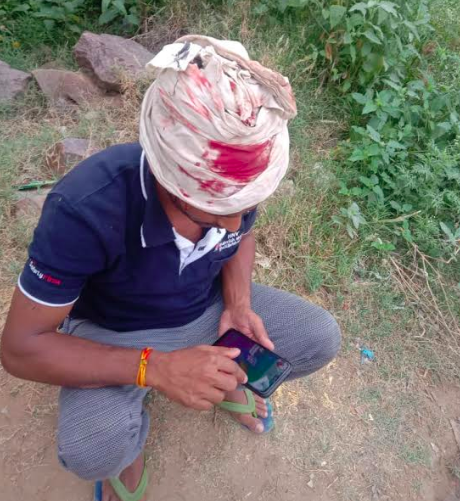 Vishwakarma’s forehead, allegedly bloodied from the beatings administered by his employers. Photo: By special arrangement.

Contractor Jitendra Singh denied the workers’ allegation. “We had told them that if they work we will pay them salaries but they didn’t understand and kept on saying that they would be infected with COVID-19 here,” he told The Wire.

“Those who are working from May 4 onwards, we have paid this month’s salary into their accounts and some of them will receive it today itself,” he added.

Meanwhile, the Neemrana police station has recorded a statement against the contractor for beating the workers. Speaking to The Wire, Amandeep Singh Kapur, Superintendent of Police, Bhiwadi said, “The police saw these workers walking in the night and asked them to go back their rooms in Neemrana and register on the e-Mitra portal. That was the only interaction these workers had with the police.” 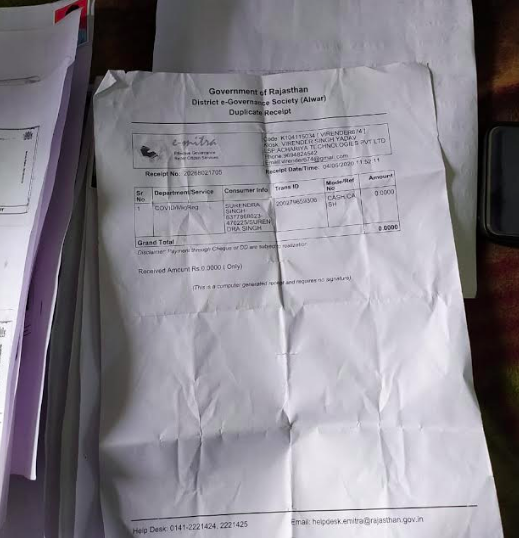 “In fact, the workers came to the station and registered a complaint against the contractor who actually hit one of them,” he added.

The complaint, dated May 15 and accessed by The Wire, mentions that Vishwakarma told the police that when the workers demanded to be sent back home, their contractor Guddu forced them to work in the factory and said no salary would be given.

The statement records that when the workers left for their villages on May 13, Guddu called them back and promised that their travel would be arranged. On May 14, when Guddu again asked them to get back to work, the workers resisted. Then, he hit them with a stick. Vishwakarma suffered a head injury in this attack.

Vishwakarma admitted that there is a discrepancy between the dates that the workers told The Wire and the police. “Yes, this was a mistake. We stepped out for Jharkhand on May 12 and Guddu hit me on May 13,” Vishwakarma told The Wire.