Without food and water, they travelled by various modes of transport: on foot, hitching rides on autorickshaws, water tankers and trucks.

A migrant worker runs behind a truck as others try to board it to return to their villages after India ordered a 21-day nationwide lockdown to limit the spreading of coronavirus disease, in Ghaziabad, March 26, 2020. Photo: Reuters/Adnan Abidi

Gorakhpur: After the nationwide lockdown was announced on March 24, ten migrant labourers set off from Haryana’s Ballabhgarh district to their home in Deoria’s Baghauch Ghat in Uttar Pradesh. They reached their village on Sunday morning, after a 60-hour, harrowing journey.

Without food and water, they travelled about 800 km from Ballabhgarh to their village by various modes of transport: on foot, hitching rides on autorickshaws, water tankers and trucks. They say they walked nearly 100 km. They also spent Rs 1,200 each to make the journey.

These workers represent the plight of lakhs of other migrant workers, who have either been stranded or make long journeys by whatever means possible because of the nationwide lockdown announced to curb the spread of the coronavirus pandemic. While announcing the lockdown, Prime Minister Narendra Modi did not seem to anticipate what it would mean for lakhs of daily wage earners, a majority of whom are migrants.

On Monday, The Wire contacted Ashutosh Yadav, Santosh Rajbhar, Shailesh Rajbhar, Manoj Rajbhar, Arjun Rajbhar, Arjun Gond, Zainuddin Ansari, Bittu Prasad and two others on phone. All of them said those 60 hours were like a terrible nightmare and that their feet are still swollen.

The ten labourers, who are residents of Koiripatti village in Deoria’s Baghauch Ghat, are employed by a construction workshop at Sikri village near Faridabad’s Ballabhgarh in Haryana, where they make columns used in building. They had come home for Holi, and left to Haryana just a few days before the Janata Curfew was announced on March 22. All of them rented one house and shared meals.

After the lockdown was announced, the contractor who had hired them handed them each Rs 1,000 and left. Subsequently, the labourers were left with no choice but to head home, leaving behind many items at their rented house.

A labourer from Bihar’s Motihari district, Ujjwal Dubey, was also part of the group. Together, they decided to return to their respective villages.

The labourers started their journey from Ballabhgarh at 4 pm on Thursday. When they could not find transport, they started walking. After walking for 6 hours and covering 24 km, they reached Palwal, where they boarded a bus.

The bus driver had promised to drop them off 3 km before Mathura, but instead dropped them at Kosi Kalan. The labourers spent the night in Kosi Kalan’s Sabzi Mandi compound. More than a thousand labourers headed to their respective villages in several districts of Uttar Pradesh and Bihar from Delhi, Haryana and other states had already gathered at the mandi.

Ashutosh Yadav said that on Friday morning, all the labourers were waiting buses. Three state transport buses arrived for passengers to Jhansi. After workers who were headed there boarded them, the buses left, only to return shortly with the passengers. 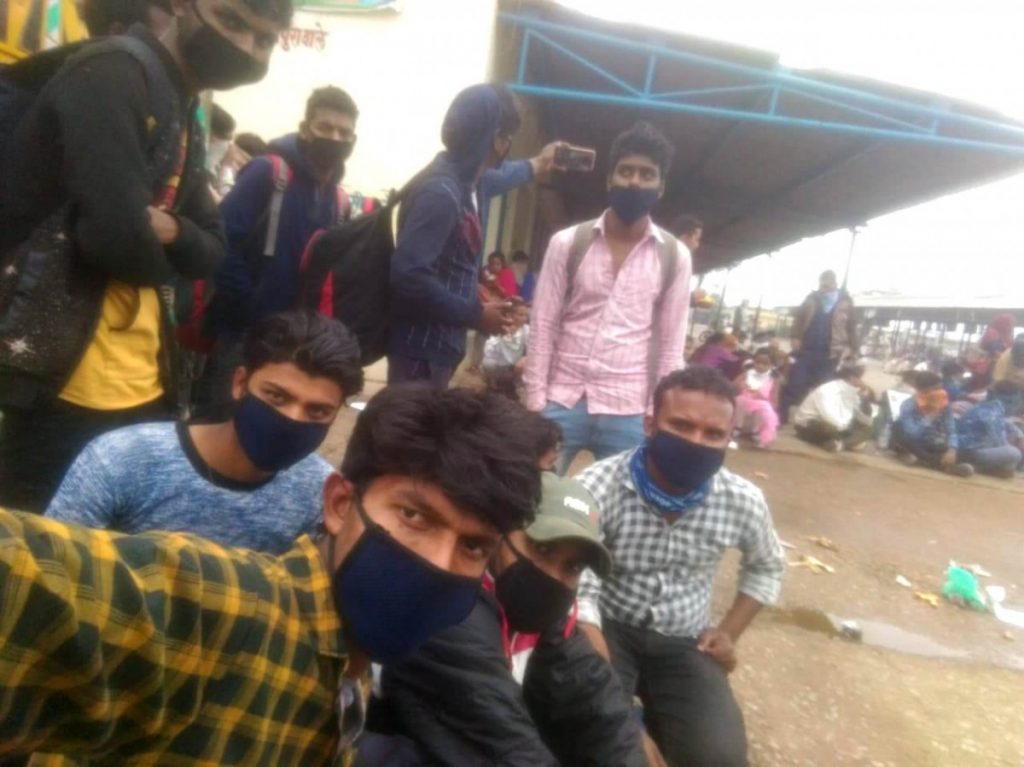 A selfie taken by the workers at Kosi Kalan in Mathura. Photo: Special arrangment

The labourers claimed that although the government was running the bus service free of cost to get them to their destination, the driver and conductor asked them to pay the fare. They claimed not to have received any order regarding provision of free services. As a result of this dispute, the bus had returned.

The workers from Deoria boarded a bus heading towards Kanpur at 10 am. The bus driver and conductor told the workers that they would have to pay Rs 600 for the journey. Most of them did so, but the bus did not move until 2:30 pm. Later, they were told that no buses will be running any more.

When they got down from the bus, they found that the gates of Sabzi Mandi compound were locked to prevent them from leaving.

Many hours later, Ashutosh and his companions managed to leave the premises. On the road, they found an autorickshaw that gave them a ride till Mathura. By the time they reached the town, the sun had already set.

In Mathura, a policeman helped them get on a truck going towards Agra. Thousands of workers heading towards their native villages were gathered in Mathura as well, but again, there was transportation available.

Travelling by truck, the 11 labourers reached Agra at 10:30 pm. Here, they boarded a water tanker which dropped them off in Kanpur at around 3:30 am on Saturday.

In Kanpur, after they were unable to find any means of transportation, they decided to walk. They travelled around 35 km on foot and reached Dahi Chauraha in Unnao at around 10:30 am.

After resting for a while, they began walking again. After covering another 15 km on foot, they hitched a ride on a truck, which dropped them off at the Lucknow by-pass road.

At 12 noon, the group walked till Charbagh bus stand, where they were screened. This is where they also received any form of government aid and they were handed food packets.

They were seated in a bus headed to Gorakhpur. Every person travelling on the bus had to buy a ticket worth Rs 370.

When they reached Gorakhpur at 10 pm, they were screened again. After an hour, they found a bus for Deoria. At this point, Ujjwal Dubey, whose destination was Motihari district in Bihar, parted from the group.

The bus for Deoria halted for a while after reaching Chauri Chaura, but the workers did not know why. They began getting nervous, but were relieved when the bus eventually started moving after an hour. The bus reached Deoria at around 2 am. All the passengers in the bus were made to pay the ticket and their names and addresses were noted down.

The labourers had to reach their village via Baghauch Ghat, but there was no vehicle in sight. They met a constable from Baghauch Ghat at the bus stand and told him about their arduous journey. He spoke to an autorickshaw driver who was going towards Pathardeva, who agreed to give them a ride.

From Pathardeva, they covered 8 km on foot and reached their respective homes at around 7 on Sunday morning.

Among the group, only two – Ashutosh and Zainuddin Ansari – had mobile phones. But by the time they reached Kosi Kalan in Mathura, the batteries had drained and they were unable to contact their family members. Their families finally heaved a sigh of relief when the workers reached home on Sunday morning.

Ashutosh said if they had known that they would be returning from Ballabhgarh barely a fortnight after Holi, they would not have gone at all.

Manoj Singh is editor of the website Gorakhpur Newsline.

Translated from the original Hindi by Naushin Rehman.