MGNREGA Was a 'Lifesaver' for Labourers During Lockdown: Gujarat Government

A report cited the "positive role" of the employment guarantee scheme in helping people vulnerable to the pandemic sustain their livelihood. 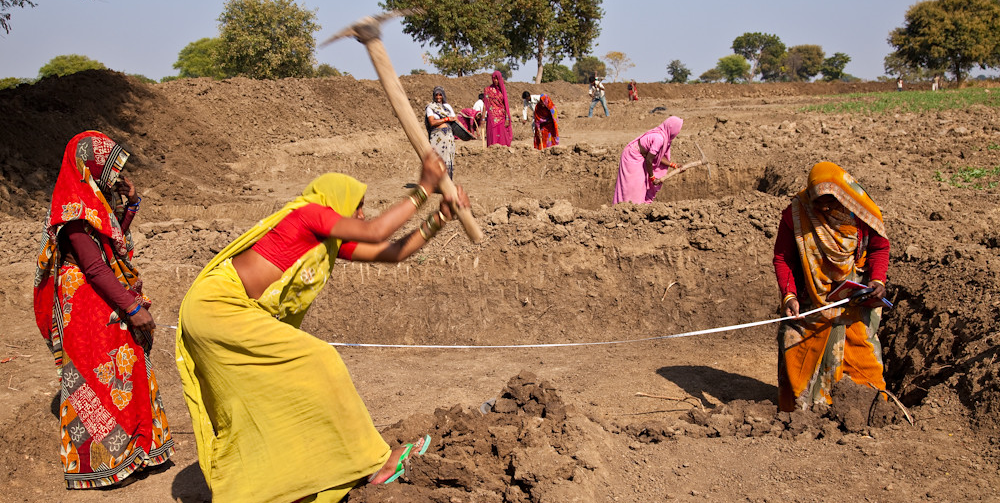 New Delhi: In the latest sign yet the Mahatma Gandhi National Rural Employment Guarantee Act (MGNREGA) is one of the safety nets available to workers in the informal sector, the BJP government in Gujarat has hailed the scheme as a “lifesaver” for migrant workers who returned to their native villages in the state due to the coronavirus lockdown last year.

The state government praised the scheme in its report ‘Implications of COVID-19 on Gujarat on Energy, Emissions, Climate and Development Perspectives’, which was released by chief minister Vijay Rupani last Saturday on the occasion of World Environment Day.

MGNREGA is the Centre’s work guarantee scheme for rural people with the predetermined minimum wage. It was launched by the Congress-led United Progressive Alliance (UPA) government in 2006.

“The MGNREGA scheme of guaranteed employment has been a lifesaver for labourers, compelled to return to their homes following the COVID-19 pandemic,” the report said.

The importance of MGNREGA is providing a source of income to informal workers who lost jobs or couldn’t find work due to the lockdown became evident last year, when finance minister Nirmala Sitharaman announced an additional allocation of Rs 40,000 crore for the scheme.

“It will help generate nearly 300 crore person days in total addressing need for more work including returning migrant workers in the monsoon season as well,” Sitharaman had said in May last year.

Although in comparison to what these migrants were earning in cities, the wages under MGNREGA are minimum, they still consider it to be sufficient to sustain their families during such crisis situations induced by COVID-19, the Gujarat government’s report said.

“Under the MGNREGA, the minimum wage paid is Rs 224 per day, which has been increased from earlier wage of Rs 198 per day. On a brighter note, living in their own village made them save more money, which otherwise was spent in travelling and rents,” said the report, which was prepared by the state’s climate change department together with IIM Ahmedabad and IIT Gandhinagar.

The report cited the “positive role of MGNREGA in helping people vulnerable to pandemic sustain livelihood” through examples of villages in tribal-dominated Dahod district, which offered the largest number of employment under the scheme during that time.

According to the report, the COVID-19 lockdown last year saw “approximately one lakh” migrant workers return to their villages in Dahod. It said that though the government has been working towards generating employment opportunities, “MGNREGA has been a lifesaver” for these labourers, according to the Indian Express.

A contractual worker managed to enrol himself to MGNREGA, and “although the maize cultivated on his small farm was sufficient to feed his family, employment under MGNREGA provided him with a better livelihood support”, it said.

However, skilled workers in a village called Pavdi in the same district, despite being pleased to have some source of income support through MGNREGA, were still hoping for the factories to resume operation. Insufficient use of their skill under the minimum wages programme was their major concern, said the report.

Dahod district (2.38 lakh – number of labourers engaged under MGNREGA) reported the highest labourer engagement under MGNREGA, followed by Bhavnagar (77,659) and Narmada (59,208), the report said. A majority of the projects were under the Pradhan Mantri Awas Yojana and state’s Sujalam Sufalam Jal Sanchay Yojana.

The report called for “re-strategizing” the MGNREGA to include “skill-mapping, long-term risk coverage and income assurance” as a crucial policy response towards prioritising agriculture as a part of the solution when it comes to migration.

It said so while highlighting how agriculture was able to “cushion migrant workers from the COVID-19 crisis by providing them with some subsistence earnings” and their return “helped in managing shortage of agricultural labourers”.

Citing the example of Saurashtra, where several migrants working in diamond polishing units in Surat returned during the lockdown, the report said they engaged themselves with land tilling activities and as farm labourers.

The report also suggested that the government should allow wage increase to match the demand for labour in the agricultural sector with that of the migrant labourers. “Agriculture should be prioritised as a part of the solution and should not be overlooked when it comes to migration…There is a need for a long-term strategy that takes into account underlying causes of migration including the links between agricultural policies and causes for migration,” it said.

According to Indian Express, the report says the government should prioritise agriculture as part of a solution for migration. There needs to be a long-term strategy that “takes into account underlying causes of migration including the links between agricultural policies and causes of migration”, it says.

The Gujarat government’s praise for the scheme, which was once the target of Narendra Modi as proof of the Congress party’s failure to address poverty, demonstrates MGNREGA’s enduring relevance.

In 2015, Modi said of the scheme, “My political acumen tells me that MNREGA should not be shut down. I will not make such a mistake because MNREGA is a living monument of your [Congress party’s] failures.”

However, as Kabir Agarwal pointed out in The Wire, the Modi-led government has

“relied heavily on the MGNREGS to reach the most vulnerable in rural India. After consecutive droughts and low farm prices, the government decided to increase allocation under MGNREGS. In fact in 2015-16, few months after Modi’s criticism, his government even increased allocation, mid-year, under the scheme faced by a drought.”