The Life of Labour: Maruti Suzuki Violence in Manesar – a Retrospective 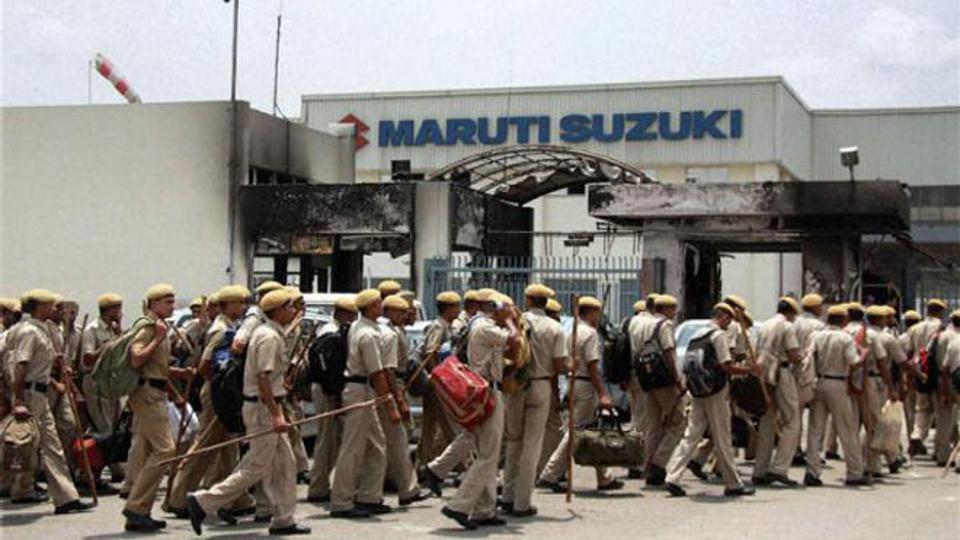 On 10th March, 2017 the Gurgaon sessions court acquitted 117 workers and convicted 31 workers in the sensational Maruti Suzuki riots case, including all the main office bearers of the Maruti Suzuki Workers Union. The quantum of punishment differs: 13 workers were sentenced to life imprisonment, 4 were given 5 years imprisonment and the remaining 14 were let off with what they had already served. With the trial coming to an end after nearly 5 years, this is as good a time as any to take a look back on the critical moments that have marked this case and the lives of the 148 arrested workers – most of whom spent over three long years in jail, even as their lives fell apart around them.

An altercation on the shop floor between a floor supervisor and Jiya Lal, one of the approximately 1500 permanent workers at the Maruti Suzuki Manesar plant, led to the suspension of the worker. While the management alleged that Jiya Lal had assaulted the supervisor, the workers on floor maintained that the supervisor had abused Jiya Lal with casteist slurs. The union began negotiating with the human resources team at the plant. It is alleged by the management and the investigation that when the negotiations broke down without a compromise, violence broke out with workers attacking the staff, including senior officials, with iron rods and other objects. The workers strongly object to this position and claim that a lot of private security was already present inside the premises and they instigated the violence. In the melee, fire broke out in the campus and gutted down a section of the factory. The General Manager (HR), Awanish Kumar Dey, lost his life and about 90 others were treated for minor injuries.

The police rounded up the factory workers and, by the next day, had arrested over 90 people including all the newly-elected union leaders. They slapped conspiracy charges against the union leaders and workers and started a massive manhunt for other workers on the charges of rioting, arson, and murder of the HR manager. In total, the police arrested and charged 148 workers for the incidents of July 18th and imprisoned them in the Gurgaon jail. All the injured persons were discharged in less than a week. The company locked the factory for a brief period and reopened it on 21st August 2012 after sacking nearly 500 permanent workers. With over 1500 police officers deployed, the Manesar plant was temporarily converted into a veritable fortress.

But the events of July 18 had deep roots in a year of unrest that began with workers at the Manesar plant attempting to form an independent union of their choice.

The facility at Manesar, which began production in 2007, was fast expanding in terms of output. This had increased the workload of the permanent workers while wages were not raising because of the increased employment of contract workers at less than half the wage of permanent workers. From 2010, the workers and management were engaged in constant conflict over the recognition of an independent union. In February 2012, after many attempts, the workers were allowed to register their union (Maruti Suzuki Workers Union) and in April 2012 they began negotiations for wage revision with the management. The events of July 2012 undid those many years of struggle and compromise, imprisoning all the office bearers of the union.

In the initial days after the riots, the media portrayal was very critical of the workers – accepting the company’s version and condemning the workers for the violence and even called it a black mark on India’s economic image. There were eyewitness accounts that supported the management’s version of events. There were also numerous reports suggesting a grave negative impact for the company and the state in terms of economic activity – no such negative impact materialised. The violence though let the then CM of Gujarat, Narendra Modi to strike a deal with Maruti Suzuki to set up a new factory in Gujarat.

But more in depth analysis soon followed, with many questions being raised about the wage disparity, work pressure and managerial models. This article in Tehelka documented the stories of some of the workers who were rounded up. PUDR, a human rights organisation, published a report suggesting torture of the arrested workers by the police and demanding an independent judicial enquiry.

The battle moves to the court

A number of issues have been raised on evidence given to the investigation including alphabetical listing of names by witnesses, identical witness testimonies as to weapons used and other such anomalies. Though bail is the norm in all cases, the sessions court and Haryana High Court rejected the bail plea of the workers citing the grave nature of crime. The Haryana High Court in rejecting the bail plea, had even observed that, “The incident is a most unfortunate occurrence which has lowered the reputation of India in the estimation of the world. Foreign investors are not likely to invest money in India out of fear of labour unrest”. So clearly, there were some extraneous considerations in rejecting the bail. Finally, two workers were granted bail by the Supreme Court in February 2015, which led to further granting of bails by lower courts from March 2015. The manner of the prosecution and the slow pace of trail led the International Commission for Labour Rights, to categorically state that the labour department “failed in its duty to serve as an impartial and effective administrative and adjudicators’ body regarding labour matters” and recommend that the workers be released and reinstated with immediate effect, while an impartial judicial probe is ordered into the events.

Denied bail for nearly three years, the workers found their lives entirely overturned. Many hailed from rural backgrounds and were primary breadwinners. Some of the stories are captured in articles in The Hindu, Business Standard and Thozhillalar Koodam. Having joined Maruti early in their twenties, many of these workers have spent the prime of their lives in prison and now find themselves caught between depression, frustration and anxiety. Many a marriage has broken down as the workers remain incarcerated without income. Even after getting bail, workers have found it extremely difficult to reset their lives and find livelihoods. The ever present fear of judgment has also meant a constant state of anxiety. About nine workers remained imprisoned till the end of the trail, and have remained in jail since the verdict found them guilty. The long wait has been more severe a punishment than an adverse verdict. Some 117 of these workers have been acquitted by the court, with no mention of the time they have already spent in jail or about compensating them for their unjustified incarceration.

Solidarity against the verdict

Maruti workers at the Manesar plant have continued to lend their support to the imprisoned workers – financially, emotionally and morally. Every year, Maruti Workers observe March 1 in commemoration of the formation of the union and in these meetings, support is expressed for the imprisoned workers. This year, it gained significance as it was clear that the verdict was about to be pronounced. A massive meeting was held near the plant, and thousands of workers from other factories including Hero MotoCorp, Honda and other ancillary plants had joined them. More than 20 unions representing over 25,000 workers came together demanding the immediate release of the workers.

Even though such extreme instances of police violence were supposed to rein in labour unrest in the region, issues have only pushed more and more workers to protest and form unions to defend their rights. Struggles by workers in Honda Motors Scooters India, Hero MotoCorp, Bellsonica, Rico and Daikin only go to show the increasing class polarisation in the Gurgaon-Manesar region of Haryana as well as the Neemrana region of Rajasthan.

Police brutality in curbing protests and their undemocratic tactics to curb democratic protests have only increased. As Aman Sethi points out in this article, the verdict has only increased the resolve of workers to fight together.

Since the verdict, over a lakh workers from over 40 factories in this region have joined various forms of protests including lunch boycotts at factory canteens. Similar protest were also seen in Chennai and other major centres of industry. The workers have demanded fair compensation for the 117 acquitted workers, reinstatement of the workers and the acquittal of the workers found guilty by the Session Court. Workers remain unconvinced about the judgement, holding it as yet another illustration of the power of the company over state institutions.