The Nine Kinds of Manual Scavenging in India

Rather than continue using the umbrella term 'manual scavenger', a comprehensive classification of the various kinds of sanitation work can better help policy practitioners to customise and improve their programs. 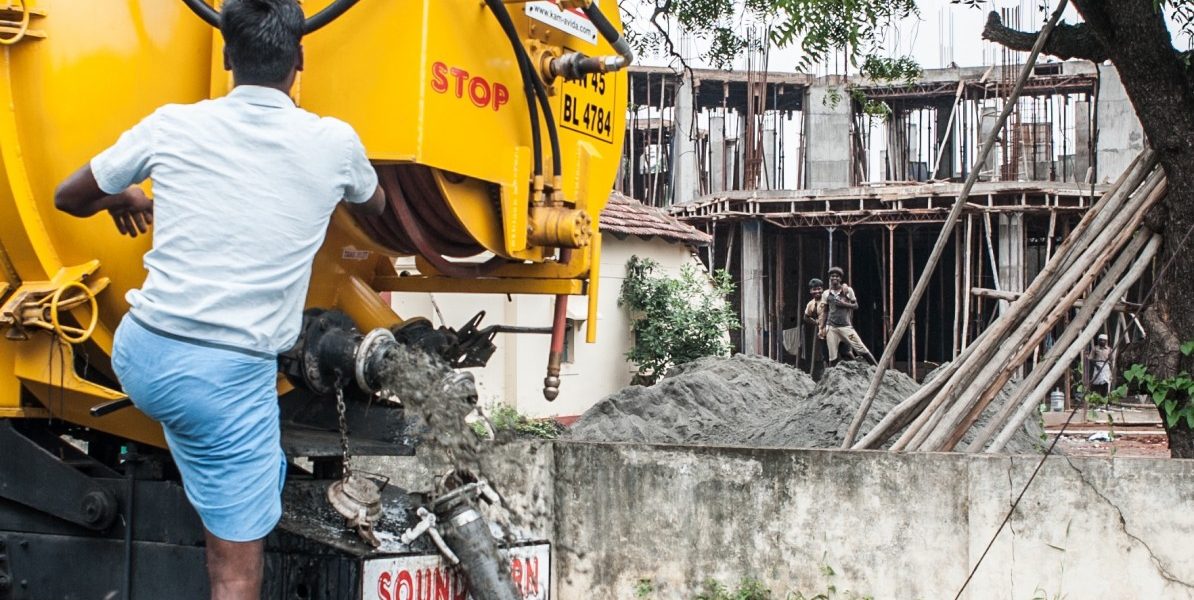 Despite an increasing focus by the government and programs such as Swachh Bharat Abhiyan, unsafe sanitation work – loosely captured under the catch-all phrase ‘manual scavenging’ – still exists in India. There are over 5 million people employed in sanitation work of some sort, with about 2 million of them working in ‘high risk’ conditions.

Here is the second in a series which introduces the situation of sanitation workers in the country; their different personas, the challenges they face, and the techno-social-financial-policy solutions that are essential to improving this situation.

The problem of manual scavenging and improving the conditions of those employed in the sanitation ecosystem has been an issue the Indian government has been trying to tackle since the country’s independence. The Scavengers’ Living Conditions Enquiry Committee was set up in 1949 to look into the state of scavengers in Bombay, and since then various commissions and advisory boards have tried to tackle this issue.

In 1993, an Act, the first of its kind, specifically for the protection of manual scavengers was instituted. Called the Employment of Manual Scavengers and Construction of Dry Latrines (Prohibition) Act, 1993 – it defines ‘manual scavenger’ as “a person engaged in or employed for manually carrying human excreta.” The employment of manual scavengers according to the act is prohibited as a criminal offence however no one was charged with employing workers in the 20 years the law came in to force.

The recently enacted Prohibition of Employment as Manual Scavengers and their Rehabilitation Act, 2013 gives a detailed definition of ‘manual scavenger’ as follows:

“a person engaged or employed, at the commencement of this Act or at any time thereafter, by an individual or local authority or an agency or a contractor, for manually cleaning, carrying, disposing of, or otherwise handling in any manner, human excreta in an insanitary latrine or in an open drain or pit into which the human excreta from the insanitary latrines is disposed of, or on a railway track or in such other spaces or premises, as the Central Government of a State Government may notify, before the excreta fully decomposes in such manner as may be prescribed…”

But there remains a descriptive fallacy here – the definition of manual scavengers as per the Act above is narrow and excludes a wide variety of work done by diverse people in terms of numbers employed, gender, and location. The current definition describes them as a single amorphous category, but leaves out other types of sanitation work such as drain cleaning or even the cleaning of toilets by domestic help.

A study called the Sanitation Workers Project conducted by Dalberg Advisors found that there are almost five million people involved in sanitation work across the country; that this work is of nine different types that varies in terms of risk exposure, payments, and policy regulation. The study recommended that the formal definition of ‘manual scavengers’ should be disaggregated to account for these types of work. 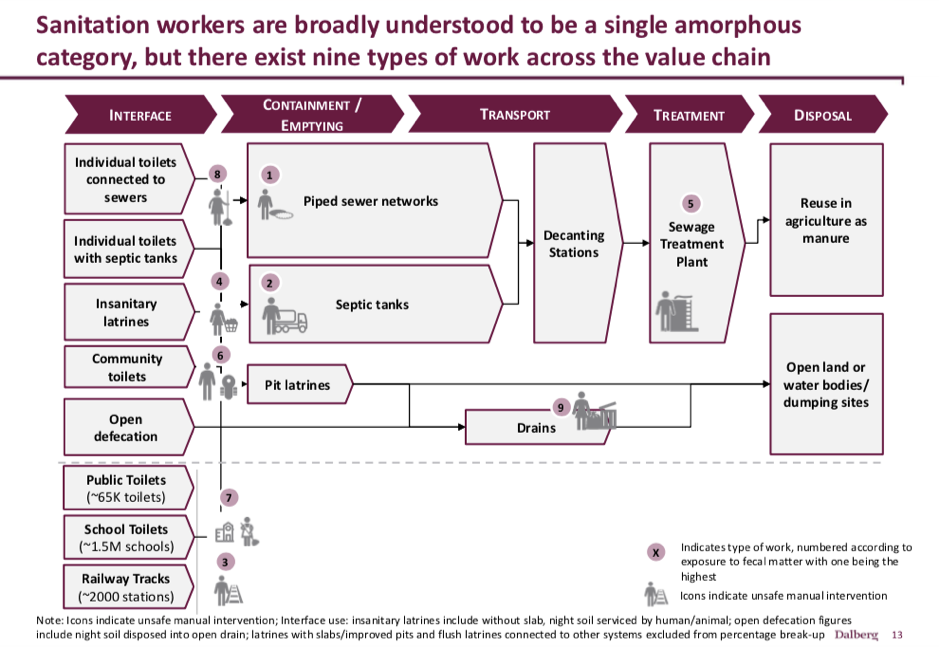 The government only recognises latrine cleaners, railway cleaners, sewer cleaners and faecal sludge handlers as manual scavengers, but the data is very poor and almost everyone agrees that these figures are a gross underrepresentation. Estimates made by different organisations have yielded numbers ranging from 182,000 – 2 million for these types of work. Waste treatment plant workers, drain cleaners, community and public toilet cleaning, domestic workers and school toilet cleaners are not recognised under the Act, though they work with human faecal matter and other dangerous waste too.

Classifying sanitation work into nine different categories and acknowledging the differences and intricacies specific to each type, would help create laws, targeted schemes, and focused interventions to address the problems sanitation workers face. These nine types of work are briefly summarised below.

1. Sewer cleaning is the process of unblocking and cleaning sewer and wastewater drains. The work is usually complaint-based, seasonal (rainy season) and occasionally for preventive maintenance. Since sewers are only in urban areas, a large percentage of the work takes place there. It is estimated that there are around 1,53,000 sewer cleaners – all of them men;

2. Latrine cleaning is the process of emptying dry/single-pit latrines – primarily in rural areas. The process involves daily collection and transport/emptying of faecal matter. There are 7,70,000 latrine cleaners, 90% of whom are in rural areas and 95% of them are women;

3. Faecal sludge handling is the process of emptying, collecting and transporting human waste from septic tanks. The work is usually carried out on demand, while de-sludging frequency varies greatly ranging anywhere from 6 months to 10 or 15 years. 80% of faecal handling is carried out in urban unplanned localities. There are currently around 22,000 workers – all of them men;

4. Railway cleaning involves cleaning faecal matter from railway tracks and platforms as well as cleaning out railway toilets. Both activities need to be carried out several times a day. There are approximately 95,000 railway cleaners – approximately 80% are women and the rest are men;

5. Treatment plant work requires workers to maintain and operate sewage and faecal sludge treatment plants on a daily basis. Workers are mostly in urban areas spread across India – working in the 527 STPs/FSTPs. There are around 6,000 male workers and no women;

6. Community and public toilet keeping is the process of maintaining these bathrooms on a daily basis. Workers are usually from both rural and urban areas (mostly slums and public convenience shelters). There are approximately 2,0,2000 cleaners – 75% of them are men;

8. Sweeping and drain cleaning requires workers to clean open drains and road sweeping. Though not traditionally associated with scavenging, they should fall under the category of scavengers because they often encounter faecal matter due to open defecation and unsanitary latrines connected to drains in urban settings. There are over 4,10,000 drain cleaners where men and women are equally employed;

9. Domestic work is the process of cleaning toilets in middle-high income households and institutions. These workers are all in urban areas and over 2 million are employed all over the country.

Rather than continue using the umbrella term ‘manual scavenger’, such categorisation can bring about a better understanding of the current sanitation ecosystem that exists in India. Doing so can aid policy makers, development agencies, and even the private sector to customise their programs to benefit sanitation workers more effectively.