Can the Use of Machines Destigmatise Sanitation Work?

Mechanisation only downplays the prejudice towards the caste-based occupation, which then manifests in other ways.

Ever since the launch of Swachh Bharat Mission (SBM), civil society has been persistent in drawing attention to the enduring relationship between caste and sanitation work. As a consequence, discussions have taken place on how the work could be instilled with respectability. One solution emerging recurrently is the mechanisation of sanitation work. This has also found a place in the SBM, primarily with the objective of eradicating manual scavenging. The presumption behind the call for mechanisation is that by minimising workers’ bodily contact with waste, social prejudice against sanitation work would be eliminated subsequently. However, a close examination of the claim, from the context of workers who empty septic tanks using machines, unveils a very contradictory picture.

In Delhi, about two-fifths of households lack connectivity to the public sewerage network. Of these, an overwhelming 70% manage sewage privately by containing it in underground septic tanks or pits. Presently, the fecal sludge stored in these systems is largely evacuated using machines, but prior to their advent, this was done manually. Often it was the Dalits or the lowest in the caste hierarchy that immersed their bodies in a lethal concoction of gases and fecal sludge. This, despite the fact that manual scavenging was banned in India in 1993, and a more comprehensive legislation outlawing manual cleaning of tanks without protective gear (Prohibition of Employment as Manual Scavengers and their Rehabilitation Act) came about in 2013.

Manual cleaning of septic tanks in Delhi reduced significantly in the early 2000s, with the arrival of suction trucks. These trucks were introduced by residents of rural (now urban) villages in North and South Delhi, such as Najafgarh, Kirari and Chattarpur, who saw a business opportunity in the growing demand for fecal waste services in rapidly urbanising neighbourhoods. In these settlements, septic tanks were the only recourse given the absence of public sewerage network.

As a solution, these entrepreneurs ingeniously put together low-cost equipment by attaching an ordinary farm tractor to a metal container fitted with a suction pump. This paraphernalia replaced the need for manual cleaning. Workers could transfer the sludge into the container by simply lowering a long suction pipe into septic tanks. 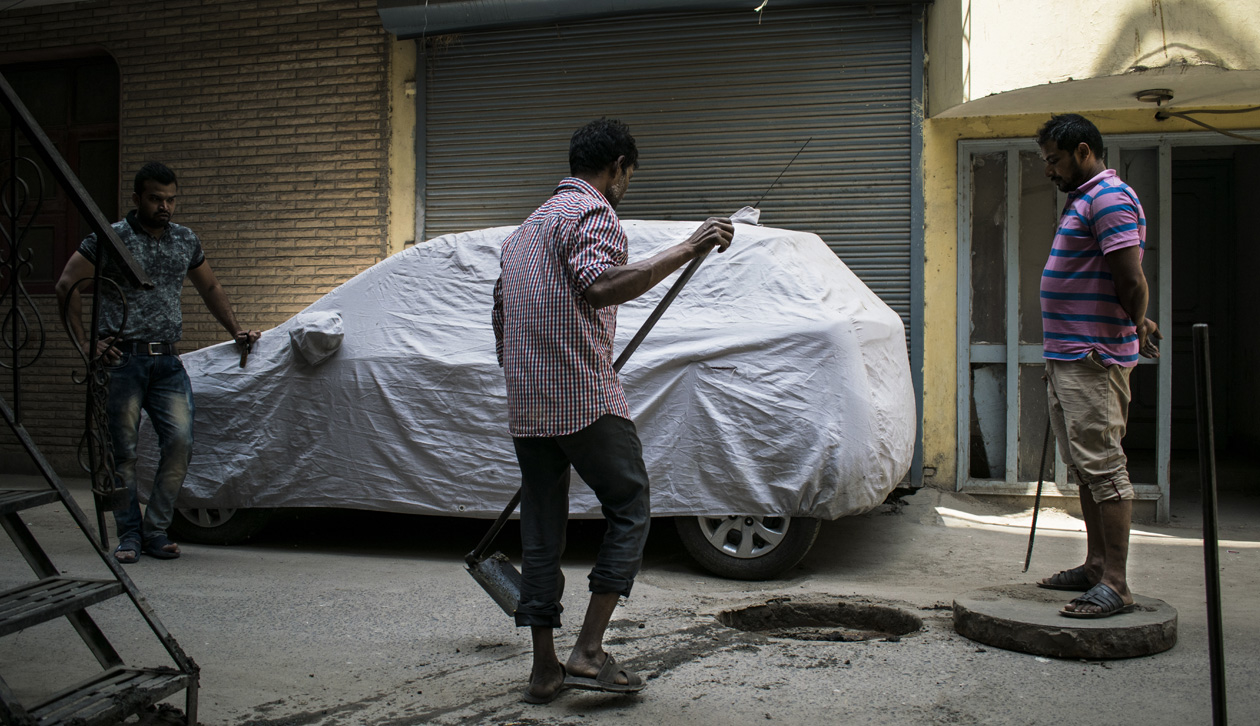 In Delhi, about two-fifths of households lack connectivity to the public sewerage network. Credit: Arpita Singh and Mayank Chawla

Mechanised, but still caste based

In my investigation of two neighborhoods in Delhi where suction trucks are used – namely Aya Nagar and Krishan Vihar in South and North Delhi respectively – I found that caste-based employment was salient to the service. Three-fifths of the workforce belonged to Dalit castes such as Jatav and Valmiki. The use of machines, which presumably acts as a preventive measure against dealing with fecal matter directly, had no impact on how workers were treated. Customers left payment on the ground, and in many instances covered their mouth and faces while communicating with the men. In Aya Nagar, workers were denied payment for the services rendered and were physically assaulted. To complicate matters, such treatment was not confined to Dalits alone, but was also meted out to non-Dalits workers in equal measure.

Many workers I spoke to chose to keep their occupation a secret from their families for the fear of social boycott. This was illustrated in the case of Mohit, a Yadav by caste, who had been shunned by his family and asked to leave home for engaging in “ganda kaam (dirty work)”. Shame was so deeply entwined with the occupation that Sawan, a 31-year-old Rajput from Uttar Pradesh, had been living alone for the past eight years, so as to keep his occupation hidden from his spouse, “Had I been born a low-caste it would have been a different matter,” he said. 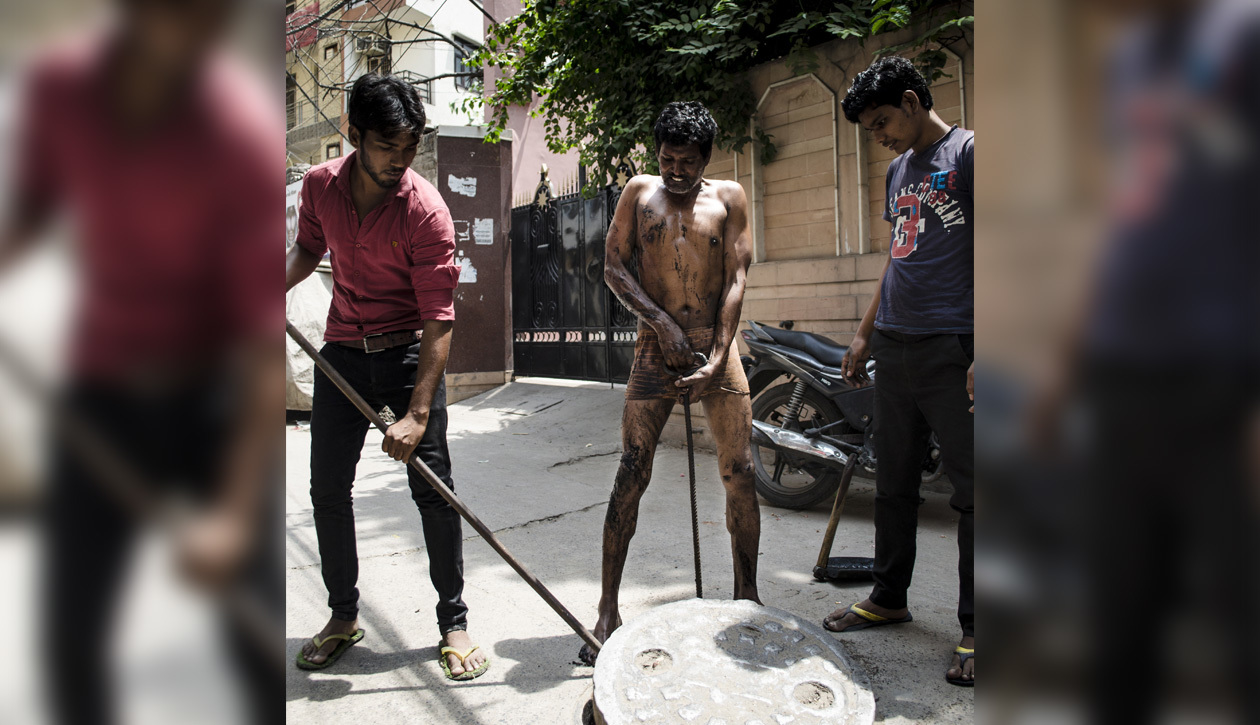 The use of machines had no impact on how workers were treated. Credit: Arpita Singh and Mayank Chawla

Societal attitudes play an important role in shaping the life of sanitation workers, which necessitates that the discourse go beyond material and technological solutions. Machines are important but it must be acknowledged that technology cannot be the panacea for the stigmas attached to sanitation work. The truth remains that mechanisation only downplays the caste prejudice towards the occupation, which does continue to manifest in other ways. In such a scenario, the relevant question to ask is: how can we, as users, become active participants in securing the dignity of workers?

The issue needs to be addressed at two levels: at the level of the state, and the citizens. Sanitation is state responsibility, thus the onus lies on the government to reflect upon the caste-bias within its own system. Schemes such as the Swachh Bharat Mission and Atal Mission for Rejuvenation and Urban Transformation (AMRUT) are a glaring evidence of this. They stress on sanitation provisions but do not acknowledge the well-being of sanitation providers.

On the other end of the spectrum, citizens, who despite being direct beneficiaries of sanitation services, are insensitive to the concerns of the very workers who ensure public health.

As a remedy, the government should formulate communication programmes to educate the public about the contribution of sanitation workers. It must invest its resources in using mass media platforms to sensitize users regarding the concerns of workers. It could also educate children at the school and neighbourhood level by organizing engaging events, plays and exhibitions to communicate the same. Such initiatives will help in changing the attitude of users, which is necessary to safeguard the integrity of workers. Sanitation isn’t a service a section of society is entitled to get and the other, born to give, by virtue of their caste status. The endeavour to dignify sanitation work must begin by changing societal perceptions.

All names have been changed.

Sweta Celine Xess is a research associate with the Centre for Policy Research. The views expressed are her own.

#Grit, where this story first appeared, is a new initiative of The Wire dedicated to the coverage of manual scavenging and sanitation and their linkages with caste, gender, policy and apathy. The Manual Scavenging Project is the first in a series of deep dive editorial projects.