The information uploaded by the government does not provide several essential details on the background of migrant workers. 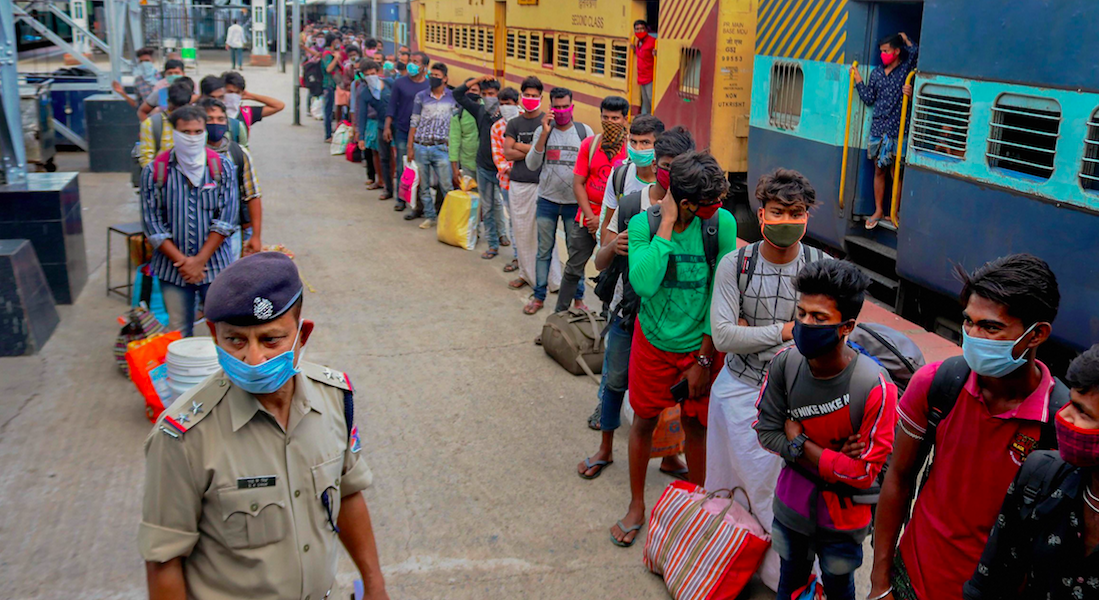 New Delhi: At a time when the Railways has stated that it has transported over 57 lakh migrant workers by Shramik Special trains, the office of the Chief Labour Commissioner of Central government has put out data on its website which claims that there are only around 26 lakh migrant workers across the country.

The release of this data is important because Right to Information applications had been filed with the Ministry of Labour and Employment to learn of the status of migrant workers and how they are spread across India.

The Labour Commissioner has now, on his RTI page, published state-wise figures on migrant workers and how around 10% of them have been staying in relief camps or shelters; around 43% were in-situ labour at workplaces and how, about 46% were staying in other localities where migrants are clustered.

While the difference between the Railways’ figure and that of the Labour Ministry may be attributed to the fact that the former has been counting the family members of the workers too in its tally, the two-page data released by the Labour Ministry points to the scale of spread of migrant worker across the country.

Chhattisgarh has over a million migrant workers

Of these workers, data reveals how a big chunk of nearly 10.85 lakh are in Chhattisgarh alone. The other states with a large number of migrant workers are Kerala at 2.86 lakh, Maharashtra at 2.01 lakh (including the additional 20,000), Tamil Nadu at 1.93 lakh, Telangana 1.84 lakh and Andhra Pradesh at a little over 1 lakh.

Other states or Union Territories with over 50,000 migrant workers include Odisha, Rajasthan, Karnataka, and Jammu and Kashmir.

The lower number of migrant workers in highly populous states like Uttar Pradesh (36,421), Bihar (7,719), Jharkhand (16,616) and Madhya Pradesh (9,621) indicates how they contribute to presence of workers in other states and themselves lack much opportunity to witness an inflow of workers from other states.

Kerala has most workers staying in relief camps, shelter homes

When it comes to hosting migrant workers in relief camps or shelter homes, data reveals that Kerala provides such facility to the largest number of 134,384 workers, which constitutes nearly 45% of its migrant work force. In Kerala, more than 1.07 lakh workers also stay at the work sites.

On the other hand, in states like Chhattisgarh, Telangana, Maharashtra and Andhra Pradesh, the data reveals that very little arrangement has been made for the stay of migrant workers in relief camps and shelter homes. While in Maharashtra and Andhra Pradesh, a vast majority stayed at their workplaces itself, in Chhattisgarh over 80% stayed in other localities while in Telangana they stayed both at the work sites and other clustered localities.

Appreciating that some data has been put out, RTI activist Venkatesh Nayak of Commonwealth Human Rights Initiative, said it was nonetheless patchy and did not answer most of the queries that had been raised.

In his petition, filed on May 5 with the Central Information Commission, Nayak had stated the Chief Labour Commissioner had issued an order on April 8 to all regional heads regarding urgent collection of data about migrant workers.

He had thus asked for the state-wise names of districts from which data about the stranded migrant workers had been received, and also the district-wise numbers of male and female migrant workers belonging to categories mentioned in the CLC’s order.

He said since only partial information has been uploaded, and that too without any dates on when it was collected, and without gender break-up, he would be seeking further details.