While the government claims it has weeded out seven lakh 'fake artisans', representatives of khadi producers cry foul. 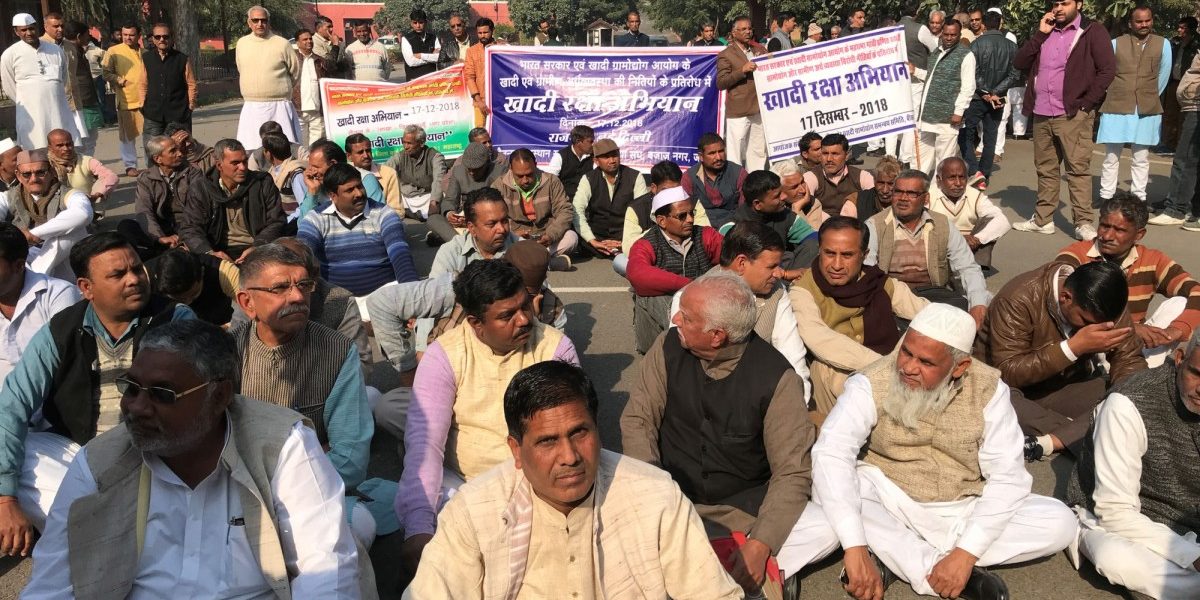 New Delhi: Less than two weeks ago, at an election rally in Dausa (Rajasthan), Prime Minister Narendra Modi claimed that his government had increased Khadi production, creating new employment for the rural poor.

“Eleven lakh people used to be employed in Khadi, we have created conditions to increase it to 22 lakh now,” he said, while taking a potshot at the Congress party for ‘destroying’ khadi.

On Monday, however, over a hundred khadi workers assembled at Gandhi Smriti in the capital had a different tale to tell.

So does a 2017-18 report of the government’s own ministry in charge of khadi production, which puts the number of artisans employed at khadi institutions (KI) at under five lakh.

Spokespersons for khadi producers’ groups say that artisans are being driven out by official policies – including the use of Direct Benefit Transfer to pay fees, and the aggressive demand for land mortgages as security for government loans.

According to the Khadi And Village Industries Commission (KVIC) Act, 1956, “khadi” is “any cloth woven on handlooms in India from cotton, silk or woollen yarn, hand-spun in India or from a mixture of any two or all of such yarns”. Promoted by M.K. Gandhi as part of the Swadeshi movement, it was an essential symbol for India’s freedom struggle and for financial autonomy in rural India.

Also read: Between Ghost Artisans and Mechanisation, How Many Jobs Does the Khadi Industry Really Generate?

In its 2017-18 annual report, the Ministry of Micro, Small and Medium Enterprises, of which the KVIC is a statutory body, recorded a total of 4,56,000 artisans employed at 2375 khadi institutions. “We have added new khadi artisans in the last three years, and the total number of khadi artisans have now gone up to 4.95 lakh,” the KVIC told The Wire.

In an email to The Wire, the KVIC claims there was no job loss, but that the reduced numbers are due to a “cleanup operation” that flushed out “ghost artisans”.

“KVIC also received complaints that the khadi institutions were claiming subsidy on inflated numbers of artisans, including artisans who had left the sector in the last 20 years due to old age, death, sickness, marriage, migration and so on,” KVIC said to news outlets.

Hinting at corruption by KIs, the KVIC added that there were ‘serious complaints’ of wages not reaching the artisans and that they have seen ‘astonishing results’ after making bank accounts mandatory for payment.

Representatives of khadi artisans from across India dispute this claim. They say there has been a worrying decline in the number of artisans, as many are reluctant to shift from cash payment to DBT and have quit altogether.

“Through the DBT scheme, this government has excluded many rural artisans. They used to be paid in cash but now have to get a bank account and travel long distances for payment,” said Ashok Kumar Sharan of the Khadi Raksha Abhiyan, a movement to advocate for Khadi that started in 2010.

Women producers, in particular, have been discouraged by the new policy.

“Women used to work in their leisure time to earn some extra income. We paid them when they came to drop their products, but now they are reluctant to go to the banks to access DBT payment. Banks aren’t easily accessible and bad road connectivity is a major deterrent in rural parts of North Eastern states,” Niranjan Kalita told The Wire. Kalita is the secretary of Uttar Purvanchal Khadi Gramodyog Mahasangh – a federation of khadi institutions in north-east India. He had travelled from Assam to join the demonstration. “The government should allow us to pay at least Rs 5,000 in cash to the artisans,” he said. 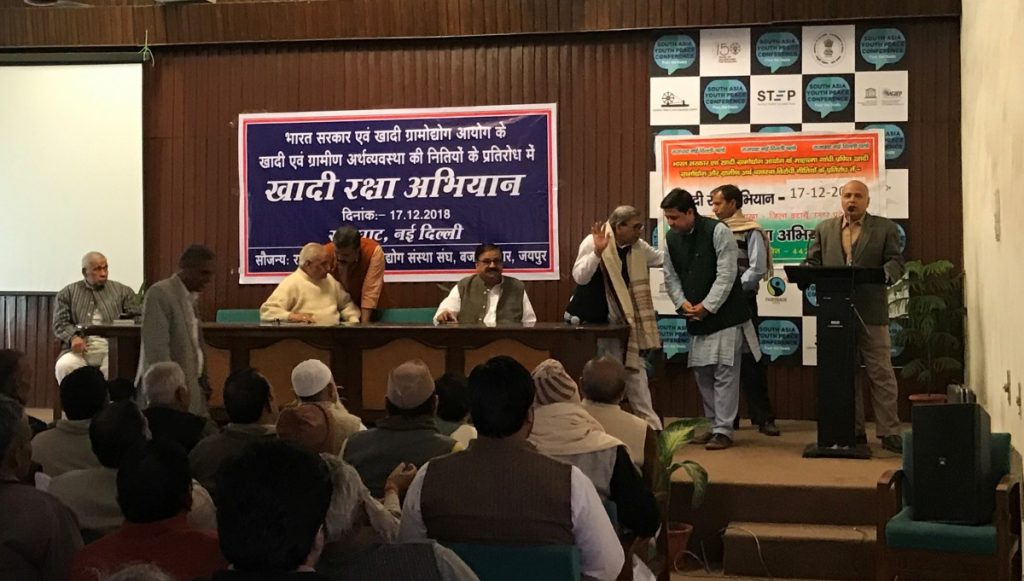 Small khadi producers also believe that the KVIC, rather than supporting their livelihoods, is unfriendly to borrowers and leaves them with restricted options.

“Neither do we get timely compensation nor is there any comprehensive policy to encourage us. They want us to buy raw materials from plants approved by the commission, which is more expensive,” Bali Ram, secretary of Khadi Gramodyog Samiti in Kurukshetra told The Wire. He added that they haven’t been compensated for products sold even two years ago.

Even for small loans, institutions are required to mortgage all the property they own as security. “KVIC directs us to pay but doesn’t reinvest, so there’s no liquidity for us to function. We can’t even use our property as they have our papers as mortgage.”

While KI representatives call the mortgage rules “illegal”, the KVIC says it is merely following standard procedure. “These properties have been mortgaged to the KVIC as per the model by-laws,” the KVIC told The Wire.

The leading demands of the Khadi Raksha Abhiyan are relaxation of mortgage rules; return of the property documents of khadi institutions; loan waiver; and immediate release of overdue payments to khadi and village enterprises.

The KVIC was dismissive of the satyagraha and claimed “bona fide” KIs did not participate. “Only 35 out of some 2600-odd Khadi Institutions took part in that demonstration of Khadi Raksha Abhiyan. Earlier, they had claimed to go on daylong sit-in and dawn-to-dusk weaving, but getting a freezing response from bona fide khadi institutions, their demonstration got over in less than half an hour,” the KVIC told The Wire.

However, this correspondent personally observed the protest demonstration at Gandhi Smriti and Rajghat and found it to continue in some form or the other throughout the day.