At Indian Telephone Industries in Bengaluru, Workers Fight a Battle Seen Across the Public Sector

Despite having worked for the public company for between 10 and 30 years, employees, guised as “contract workers”, have been subject to precarious labour terms. 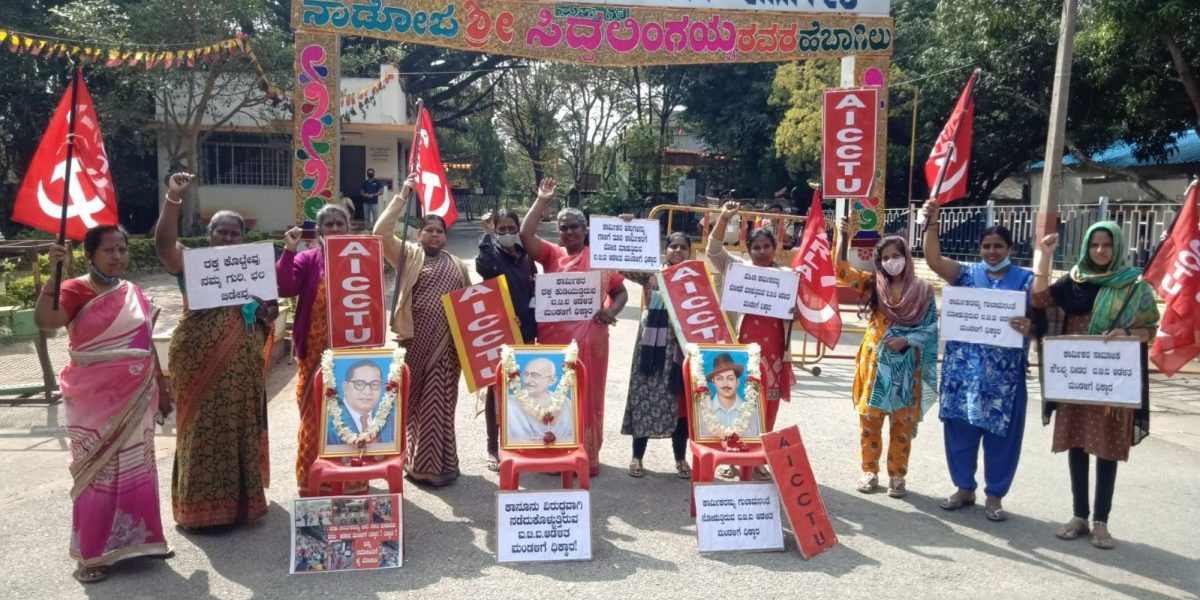 Bengaluru: It was any other workday on Tuesday, December 1, 2021.

Workers of Indian Telephone Industries (ITI) Limited, one of the country’s largest public sector undertakings (PSUs), tried to enter the industrial campus’s main gates in north-eastern Bengaluru’s K.R. Puram to report for work as usual. That morning, security guards prevented the workers from entering the premises, informing them that their contractor had changed and that the workers were thereby terminated from the company. Several hours later, an HR representative from ITI told the stranded workers that ITI “no longer has a relationship” with them, according to one worker, who asked to remain anonymous.

Despite having worked for the public company for between 10 and 30 years, employees, guised as “contract workers”, have been subject to precarious labour terms. The latest unilateral termination of these sham contracts, in concert with a series of other alleged labour violations over the past year, have prompted workers – now unionised under the All-India Central Council of Trade Unions (AICCTU) – to wage a peaceful protest outside ITI’s main gates since December 1.

Public sector industrialisation in Bengaluru’s mid-20th century laid the groundwork for the country’s digital economy. Reservations for marginalised castes and job security in the public sector provided modest upward mobility and the formation of a public sector middle class in the city. Established shortly after independence in 1948, ITI is a PSU of the Government of India’s Ministry of Communications. Today it specialises in fibre optics, broadband connectivity and defence and surveillance technology contracts all over the country, including in remote villages and border regions. Like other PSUs, ITI was forced to shrink its labour force with the advent of liberalisation and privatisation in the 1990s.

Podcast: Girmitiya: A Saga of Indian Indentured Labourers in Fiji

Yet the company seems to have financially weathered this reform period to achieve a turnover of Rs 1,894 crore with a profit of Rs 111 crore before tax during FY 2018-19, an improvement of 9% over the previous year according to its 2018-2019 Annual Report. In a letter to the company’s shareholders in the same report, the chairman and managing director, Rakesh Mohan Agarwal, writes that his company “has performed exceedingly well”, and had achieved “the highest turnover in the past eight years”.

Despite this financial rebound, however, labourers who toil on ITI’s factory floors and in remote locations have been steadily casualised and rendered precarious over the past decade. During the first COVID-19 lockdown in April 2020, over 250 ITI workers were laid off. The payment of salaries, provident funds and other employee benefits was also suspended for 10 months that year – actions that were enabled precisely because of precarious contractual terms.

“Contract labour is nothing but modern-day slavery,” says Clifton D’Rozario, national secretary of AICCTU and state secretary of CPI(ML) Liberation. “The contract system is introduced by management in state enterprises to deny workers their rights as regular employees and to ensure that employment terms are at the discretion of management. Sham contracts also ensure that workers live in perpetual fear of losing their jobs and hence do not collectivise or demand their rights.”

Despite precarious employment terms, ITI workers perform core jobs such as quality assurance, data entry and process engineering that enhance telecommunications connectivity, national security and even public health for the country. According to a letter dated December 4, 2021 sent by the AICCTU and addressed to Ashwini Vaishnaw, minister for communications, electronics, information technology and railways, ITI workers were deployed during the first COVID-19 lockdown to manufacture 3,000 hospital ventilators on an emergency basis. As the AICCTU letter puts it, “These workers have dedicated their lives to M/s ITI and have been part of various works in defense for the security of the nation.” 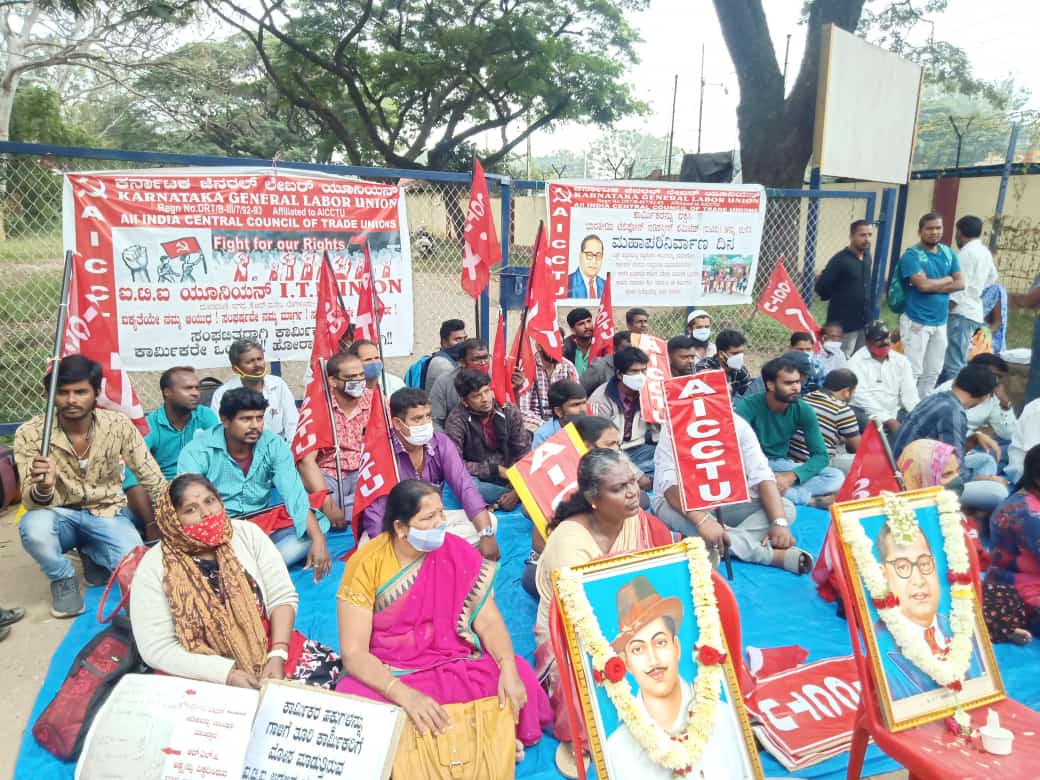 It was during the first lockdown in 2020 that 120 ITI workers decided to join AICCTU to bargain for their rights. “It is the violation of their rights that the workers in ITI stood against. And it is for this that they are being victimised. In reality these workers are not just fighting for their rights, but to ensure the enforcement of labor laws and to uphold the Constitution and its values vis-à-vis workers,” says D’Rozario. This move to unionise was not received well by the company’s senior management, who is now refusing to meet with the workers.

Actions taken by ITI to terminate its contract employees may be illegal on several counts.

First, in response to a complaint filed by ITI workers, the Central Regional Labor Commissioner of Bengaluru instructed ITI management in October-November of this year that no worker should be terminated during the hearing of the dispute. This was in accordance with Section 33 of the Industrial Disputes Act.

However, ITI management claims that the unionised workers are not technically ITI employees, and therefore the company sees no need to abide by Section 33. For their part, given their longstanding loyalty and years dedicated to the company, workers consider themselves squarely to be ITI employees.

Second, under Article 19 of the Constitution of India, workers have a legal right to partake in union activities and cannot be punished for doing so. In retaliating against the workers for unionising, the actions of ITI management are punishable by law.

In a phone interview with The Wire, M.D. Diwvedy, general manager, human relations at the ITI corporate office said, “The labourers have been removed because the contracting agency has changed.”

When asked about the fact that workers had dedicated years to ITI’s Bengaluru plant despite working under precarious contracts, he added, “We have no record of how long the employees have worked. We merely ask the contracting agency for manpower. The contractor makes decisions on the supply of manpower.” He added that the dispute is currently under consideration by the Regional Labor Commission (Central) of Bengaluru.

Protesting workers, many of whom are women and Dalits, have been forbidden from using the restroom near ITI, despite having worked for the company for up to three decades. Still the union is persisting in its struggle, now in its seventh day. On December 6, a day recognised as Mahaparinirvan Diwas, protestors lit candles in commemoration of Dr Babasaheb Ambedkar’s death anniversary. Their demand is to be re-hired as permanent employees and to be treated with the respect and dignity that they deserve after working in the public sector for so many years.

“This is the only job I have,” said one of the workers who spoke under anonymity for fear of retaliation. “I have been working here for 10+ years. Without work we will not be able to pay rent and school fees. We are demanding justice.”

In a move of solidarity, other unions like the Bruhat Bengaluru Mahanagara Palike Pourakarmika Sangha (the BBMP Sanitation Workers Union), also affiliated with AICCTU, joined the ITI protest last week. In October this year, the BBMP Pourakarmika Sangha organised a city-wide jatha to voice concerns over their disrespectful treatment by BBMP managers, contractors and Bengaluru residents; poor wages; and inhuman working conditions in what is essentially a caste- and gender-based urban occupation. Pourakarmikas have similarly been subjected to sham contractual conditions and unjust labour practices over the past decade.

It is now up to the regional labour commissioner to take action to hold ITI accountable. AICCTU is also demanding an enquiry into ITI’s illegal labour practices and is seeking action against those responsible for the violation of worker rights. This case has the potential to serve as a warning to other public enterprises seeking to render their workers disposable through sham contracts.

Malini Ranganathan is an associate professor in the School of International Service at American University, Washington, DC. She researches land, labour and caste geographies in Bengaluru. Twitter: @maliniranga