In Jharkhand, Death of 5 Labourers Is Testament to Coal Mafia's Chokehold on Poor

Though police maintained that only five died, local sources claimed at least 16 deaths took place. Because mining is illegal, relatives run away with the bodies to avoid runs in with cops. Rescue operations going on in a colliery in Nirsa. Photo: Special Arrangement.

Patna (Bihar): The death of at least five persons in the collapse of a mine of the Eastern Coalfields Limited in Jharkhand’s Nirsa area has once again exposed an unholy nexus between administrations and the influential coal mafia in the state.

On Tuesday, at around 4 am, parts of a coal mine of the Gopinathpur open cast project (OCP) collapsed when labourers were extracting coal. So far, five bodies – four women’s – have been recovered from the site and police have stopped rescue work.

The region is around 300 kms away from the Ranchi district headquarters.

“Five bodies have been recovered. All were locals. Now rescue work has concluded. An FIR (first information report) has been lodged against a few persons,” a police officer at Nirsa police station told The Wire over phone.

Jharkhand chief minister Hemant Soren tweeted, “Some casualties have been reported from the coal mine located in Nirsa, Dhanbad. The district administration is actively engaged in rescue and relief work. May God grant peace to the departed souls and give strength to the family to bear this difficult time of grief. Help is being provided to the injured.”

Local sources said that 10 people died in Gopinathpur colliery and people from the region fled with five of the bodies. They also said that six more people died – three in Kapasara and three in Dahibari collieries – but locals fled with all the dead bodies. 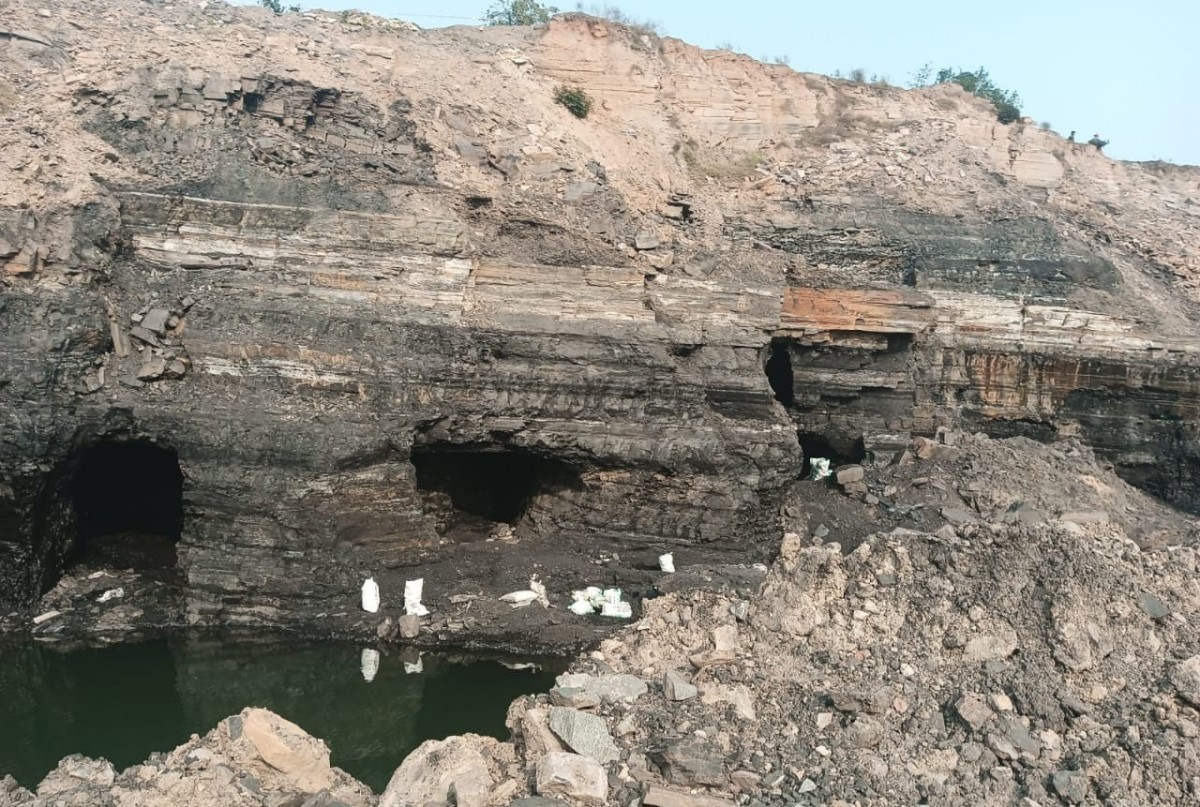 The site in Nirsa where labourers died. Photo: Special arrangement.

Local sources further said that in Kapasara all the deceased were from West Bengal. All the dead bodies were taken by the respective relatives, they said.

Police refused to admit that any deaths took place in Kapasara and Dahibari and said that only five people died in Gopinathpur colliery.

Meanwhile, former local MLA Arup Chatterjee told The Wire, “At least eight deaths are confirmed and more bodies could be under the debris.”

Senior superintendent of police Sanjiv Kumar told the media that a special investigating team (SIT) had been formed. He said that strict action will be taken against those who were involved in illegal trade of coal.

Former MP Basudev Acharya also visited the spot and demanded action against the coal mafia and compensation to the families of the deceased.

Jharkhand has the biggest coal reserve among states in India. It has a total of 83152 million tonnes of coal reserve which is 26.06% of the country’s total, according to the Geological Survey of India.

This huge reserve of coal, poverty and lack of employment opportunities in the state has aided illegal coal mining. The coal mafia is active in the region – there are dozens of mafia lords – and is are learned to make millions by engaging the poorest people in this risky job.

First, the mafia engages poor labourers to mine coal illegally. Since local people have no other employment, they remain ready to work.

These women and men labourers go to the mines in the wee hours so that no Central Industrial Security Force guard or any other security guard is around to stop them. By early morning, the coal is transported to the mafia employers, usually on motorcycles.

“Mostly women are engaged in mining and men transport it,” a local source told The Wire.

But the mafia pays very little money to them. They then transport the coal to Uttar Pradesh, West Bengal and Bihar where these are used in brick kilns and small factories.

A labourer of Nirsa says, “We hardly get Rs 300-400 per tonne whereas the traders sell it at a very high rate. We have no other means of income so we have to mine coal illegally.”

The common understanding in the area is that the coal mafia has deep connections with police and administration, which helps them escape action or penalty during accidents causing injury or death.

Also read: Behind Gujarat Mine Dumpsite Cave In, a Story of Pollution, Lost Land and Apathy

Since such mining is illegal, labourers ensure that even if deaths happen during mining, the dead bodies do not reach police.

They first try to recover bodies and hide them. If they do not get to the bodies first, they do not appear before police to collect them at all.

In Tuesday’s incident too, dead bodies remained unclaimed for many hours. “Later, distant relatives came and took the bodies,” another local source said.

Dhanbad DC Sandeep Singh who visited the site told reporters that police will not investigate those who died. “We are not going to see if they were mining illegally or not. No action will be taken against labourers,” he said.

Deaths in Jharkhand’s coal mines are not sporadic incidents.

In 2020, more than half a dozen died in mines while engaged in illegal mining. Deaths were reported last year too. In December last year, one person died in the Dahibari colliery after a part of a mine collapsed.

In December 2016, 11 workers died when an open-cast coal mine at Paharia Bhodaye in Godda district collapsed. Arup Chatterjee, the former MLA, said, “Deaths happen almost every day in the open cast during illegal mining. They are reported only when many deaths take place at the same time.”

“Companies who own the collieries must ensure that illegal mining does not happen. There are guards in coal mines. CISF is there. Despite such security how are people entering these mines?” he asked.

A local activist, Kashinath Chatterjee estimates the illegal coal business as one that touches Rs 200 crores. “The coal mafia in Dhanbad is very powerful. They enjoy political backing,” he said.

He said that after mining, companies leave sites open. “They become death traps for the poor. Companies should close the coal mines after mining is completed,” he said.

“On the other hand, the state government is doing nothing against it. Poor people have no jobs so they are forced to mine coal illegally. The state government should ensure jobs for local people and also that abandoned mines are properly closed,” Ghosh said.

“SIT can’t  investigate the case with impartiality as police is in collusion with them. Police is trying to hush up the incident. Government must handover the case to CBI,” he said.

He also claimed that deaths had happened at the Dahibari colliery as well but the police is denying it. “Police is denying any death in Dahibari but yesterday a deceased woman’s husband came to me and said that his wife died in mining mishap. Police is still saying that only five deaths have happened. Police should add one more death,” Marandi said.

Former chief minister Raghubar Das said, “Illegal mining has increased under the Hemant government and that is why mishaps have also increased.” He demanded compensation and government jobs for the family members of the deceased.