Many migrants, who walked several kilometres to reach the Ramlila Maidan, claimed they were beaten by police.

A panoramic view shows migrants waiting to board buses to reach Ghaziabad railway station as part of their journey to travel to their native places. Photo: PTI

Ghaziabad (Uttar Pradesh): A day after thousands of migrant workers from Delhi, Haryana, Punjab and parts of Uttar Pradesh descended on the Ramlila Maidan in Ghaziabad in an attempt to secure passage on the Shramik Special trains to Bihar and further into Uttar Pradesh – leading to severe violation of social distancing guidelines – the Ghaziabad administration, on May 19, restricted their access to railway stations, bus stands and the grounds where bookings are being done.

More visuals from Ghaziabad where migrants have turned up in large numbers to get themselves registered for special trains. This is the time medical screening and quarantine facilities in East UP and Bihar should be stepped up to the maximum. pic.twitter.com/oGZAs4yIfx

The entry to the GT Road has been barricaded two kilometres ahead of the Maidan, near the Meerut Road intersection. District police officials manning the barricades told The Wire that further bookings have been stopped for now.

This has not kept hundreds of migrant workers off the stretch of the road up to Jawahar Gate. On Tuesday, these reporters saw them waiting at different points in groups under flyovers and on pavements, hoping they would be allowed to approach the booking tables at the Maidan at some point.

As per procedural norms, all migrant workers who wish to travel by train from Ghaziabad onwards are required to reach the Ramlila Maidan in the heart of the city to first secure their passes, after which they are taken by buses to the railway station.

The Wire spoke to several of the stranded migrant workers, and their complaint was the same – they had walked or travelled long distances to reach Ghaziabad in the hope of securing passage to their homes. But now, neither information nor the roads that took them to the officials were available to them.

Almost all migrant workers said they had to reach home because they had run out of money and food had become a major cause of concern. Most of them said the Uttar Pradesh government has not provided them any help in that regard. Migrants board buses to reach their native places, during a government imposed nationwide lockdown as a preventive measure against the coronavirus, in Ghaziabad, Saturday, May 16, 2020. Photo: PTI

Brothers Ainul Haq and Mainul Haq from Bhiar’s Katihar district, who work in Delhi but stay in Ghaziabad’s Sahibabad area, said they did not receive any dry ration or food aid from any NGO or individuals in the last two months. They live in a rented accommodation. “We had to leave because the landlord has started asking for rent,” said Mainul.

Ainul, a tailor, said, “We could not take money from home as we are the ones who support our family there.”

They, along with several others, alleged that police were lathicharging anyone who was trying to proceed towards the booking centre. “We learnt that everyday three trains have been going to Bihar. If not today’s train, we can go in the one leaving tomorrow, but for that we have to be allowed to go near the booking centre” said Mainul, a tiling expert.

He and three others walked half the way and then took an Ola cab to reach the station, but to no avail.

Mohammad Ramzan, who is a mason specialising in tying iron lintel and who stays in Maharajpur in Ghaziabad, had a similar experience. He walked nearly 15 kilometres to reach the spot but was not allowed to go to the booking point by the police. His contractor gave him no loans, so Ramzan had had to ask for money from home. He has run out of that money too now, and therefore must get back home, in Madhepura district of Bihar.

No money for rent Ramzan said he earned around Rs 10,000 per month and had made do with some savings in the initial period after the lockdown. But with no rations being supplied by the state and no food being provided by the district administration, he had largely been surviving on money borrowed from the family.

Some of the workers had walked all the way from Delhi to Ghaziabad too catch trains to districts in Uttar Pradesh and Bihar.

Vishnu Mishra, who stays in Madhu Vihar in East Delhi and is a nurse, was one such worker. Mishra said he wanted to return to his native place in Gorakhpur as he has no money left to pay the rent for his room. “I had about Rs 20,000 which I spent in the last two months, on rent and food,” he said.

He too said that the Ghaziabad police was not letting workers reach the booking centre and was only shunting them from one place to the other.

“There is nothing for the common man. The common man has to only suffer. The police initially told us to wait near a church, saying a bus would come to take us. Some people also came to distribute food there. But later, other cops came and shooed us away from that spot. Likewise, the traffic police is also not letting us move around,” he said. Further, near Jawahar Gate, there were a number of people sitting by the road and waiting for police to allow them to the booking centre. Many more migrant labourers were either descending from taxis with bags or reaching the spot on foot, exhausted.

‘We walked from Panipat’

A group of men who reached the place from Panipat in Haryana, on foot, said they have been languishing there for the past ten days but the Ghaziabad administration has not made any arrangements for their travel.

A middle-aged man among them said, “I have come from Panipat in Haryana and have to go to Purnea district in Bihar. But the police is telling us to go back from where we came and take the train from there.” He appealed to the government to somehow make arrangements for their travel to Bihar.

Another group of people, who came from Delhi, and were also headed to Purnea district, said they too have been waiting for some news on trains. Mohammad Naseer, who pulls a rickshaw, and Mohammad Hatim, who sells goods in a cart, said they had walked to the place on foot and had been hungry since yesterday, May 18. 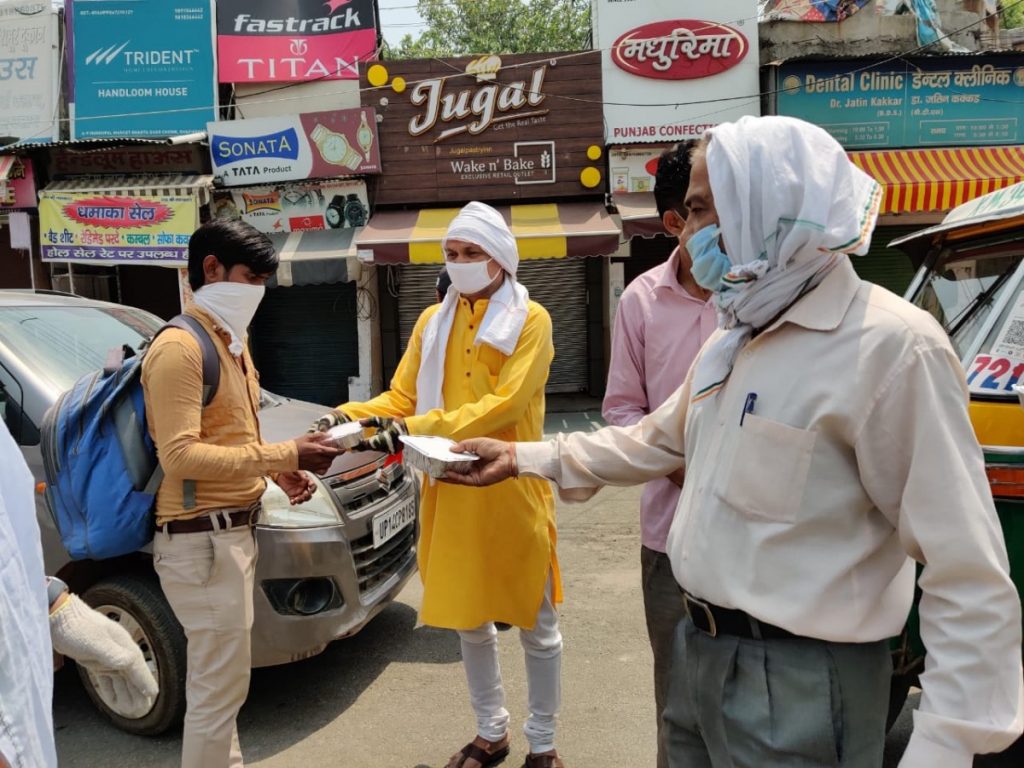 A minivan carrying food packets stopped by to hand out packets to the migrants, as well as police personnel manning the barricade. “We are a group of local residents supplying about 500 packets of lunch to both the police and those stranded across our town. We are only trying to help,” said one among them.

The Ghaziabad administration said it has been doing its best but the sheer number of people streaming in from neighbouring states have made its efforts appear small.

Speaking to The Wire, Additional District Magistrate (administration) Shailendra Kumar Singh said the district administration has been sending 16,000 to 17,000 migrant workers home each day but with many more reaching Ghaziabad from other states like Delhi and Haryana, and also Noida and Greater Noida which employ a lot of migrant labourers, it was clearly not enough and had led to the chaos on May 18. 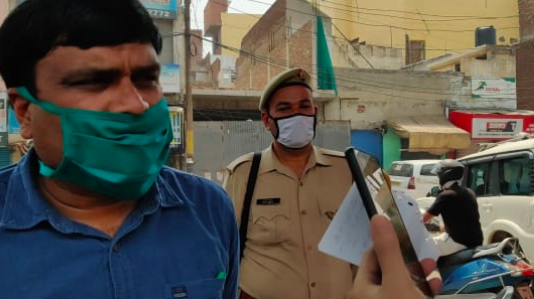 “You should ask them why are they coming to Ghaziabad alone. We know that those who can’t stay on are the ones who want to go home but we should also ask, why are the states from which they are coming not sending them directly to their home towns?” Singh asked, with a note of exasperation in his voice.

Six special trains ferrying people to UP and Bihar

Singh said that everyday around 8,000 people are being sent homewards in buses and around 7,000 by special trains, by the district administration. The Railways has arranged six special trains each day from Ghaziabad to take people to Patna, Muzaffarpur and Raxaul in Bihar, and Azamgarh, Varanasi and Gorakhpur in Uttar Pradesh.

This apart, he said, buses are being used to take people to places within UP such as Lakhimpur, Bundelkhand, Agra, Hardoi  and Sitapur. 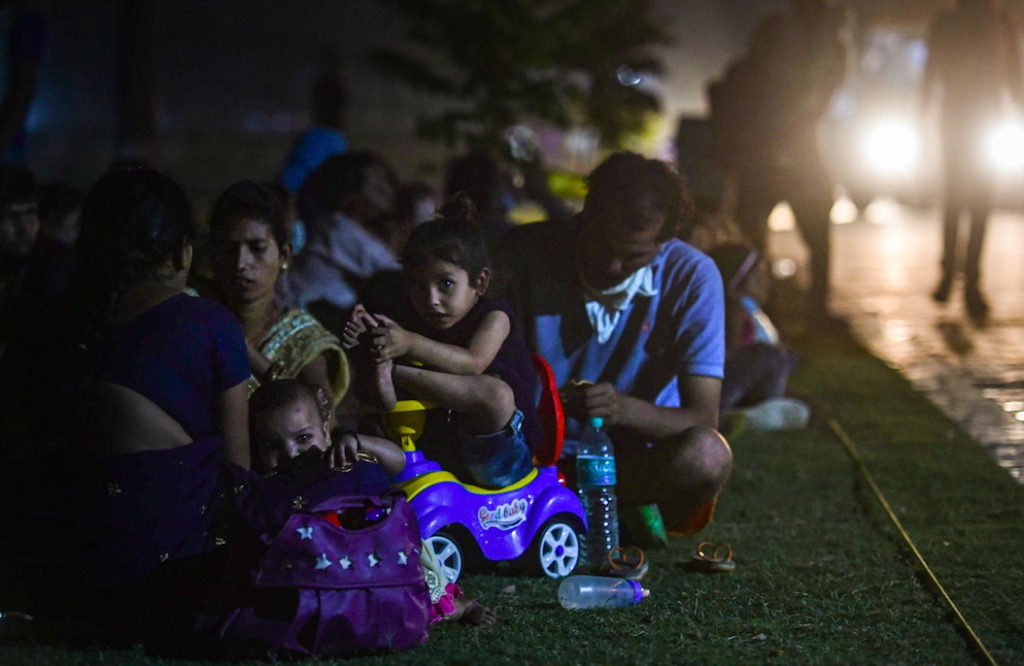 Highlighting “undue pressure” on the Ghaziabad administration, Singh questioned why it was that despite four trains also being run from Noida, people have been reaching Ghaziabad town. Likewise, he said, the running of 19 special trains from Delhi has not ended the exodus on foot from the national capital.

Singh insisted that while there are restrictions on the movement of migrant workers by road, they have been using Google Maps to walk along railway tracks or canals to reach the city.

Also read: Here’s Why Trade Unions Have Called for a Nationwide Protest on May 22

“We have a very porous border with Delhi and Noida and that is why we are unable to prevent more people from reaching here. There are lakhs of migrant workers who stay and work in Ghaziabad itself. We are supposed to cater only to them. Even if about two lakh of them within Ghaziabad decide to leave, it would take us 10 days to make arrangements for them.”

But, he said, with constant influx from Delhi, UP and Haryana, the district was struggling to take care of these workers.

“We are distributing 1.5 lakh food packets each day. But clearly that is not enough in view of the number of people who are entering the city,” he added.