For Sanitation Workers On the Front Line, Modi's Swachh Bharat Is a ‘Jumla'

The BJP government has turned its sanitation mission into a photo-op while neglecting those who have to implement it. 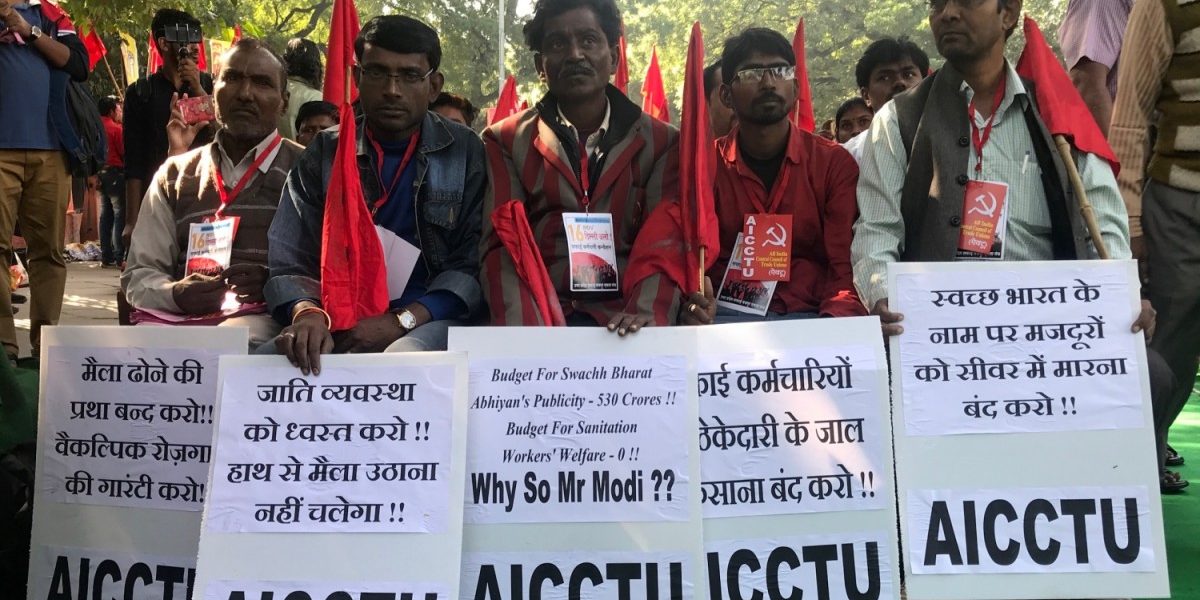 Workers demanding equal wages and social security benefits during a convention organised by the All India Central Council of Trade Unions (AICCTU) at Jantar Mantar on Friday. Credit: Akhil Kumar

New Delhi: “Maybe the bodies washed away to the Ganga,” said Dharmendra, from Allahabad. “I’ve seen many colleagues enter that death trap, and some of their bodies were never recovered”.

Dharmendra is over fifty years old, and has been a municipal sanitation worker for over 30 of them. He still has not been made a permanent employee – denying him a minimum wage or social security, despite the hazards that come with his job.

“When we’re made to enter sewers, there’s no safety equipment to protect us from noxious or toxic gas,” he said. “When Yogi Adityanath visits our city, we show up for work even at midnight. But he doesn’t bother meeting us. Policemen chase us away when we approach [him]”.

Around 200 sanitation workers from states across India have raised concerns about low wages, working conditions and social security. Referring to Prime Minister Narendra Modi’s flagship Swachh Bharat Abhiyan (SBA), they called it a ‘jumla’ that has ignored workers on the front-line.

In spite of the Central government spending close to Rs 530 crore on publicity for the SBA in the last three years, little has been done for the welfare of those who employed under the mission.

Also read: For Manual Scavengers, Swachhta Is Not Seva

An overwhelming majority of the more than five million sanitation workers in India are still contractually employed, wherein they are not paid minimum wages and often work in hazardous conditions without any safety equipment and access to healthcare.

Being a caste-ordained occupation where the lowest sub-castes of Dalits are forced to risk their lives, laws and regulations are scarcely implemented.

Manual scavenging was outlawed in 1993, and another law in 2013 reinforced this ban. Notwithstanding its illegality, there is still no official count of  how many people continue to work in this hazardous occupation. The Wire‘s GRIT project has collated data from official sources indicating that over 13,657 people are employed as manual scavengers, and at least 419 have died on the job.

The actual numbers are expected to be much higher.

A ledger of concerns

The Wire spoke to sanitation workers from Delhi, Chhattisgarh, Odisha, Karnataka, Maharashtra and Bihar, who voiced their protest about caste discrimination, lack of any social security and exploitation through low wages. 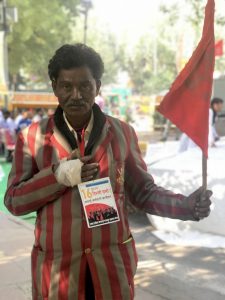 Dharmendra has been a sanitation worker for the last 30 years

A major demand of the convention was ending the contractualisation of labour.

“Many of us have been working for 20 years, yet we have not been made permanent,” Tapan Kumar Mohanty, from Angul district in Odisha told The Wire. This is despite a law proscribing workers from being hired on a contractual basis for jobs of a perennial nature.

“We work from 4 am to 2 pm and get Rs 226 as daily wages,” Mohanty said. He added, “Employees’ State Insurance (ESI) and Provident Fund (PF) contributions are deducted from our wages, but not deposited [into] our accounts. Municipal officers and contractors siphon off that money. This meagre sum is not enough; we have to look for more work to manage our household”.

With technological advancement in sanitation and waste disposal, workers hope to move to more rewarding professions and dignified lives – away from the stigma attached to sanitation work.

“We have reached the moon and beyond, why are workers still forced to do this humiliating job?” Uday Bhat, leader of sanitation workers in Maharashtra, tells The Wire. “Use machines to clean sewers and other dangerous work that can easily be replaced by mechanisation. But we also have to ensure jobs are not lost because of it. Workers have to be rehabilitated to more dignified jobs”, he remarked.

Sanitation workers in municipalities like Bengaluru and educational institutions like JNU have won a better deal through sustained struggles.“We started our movement in JNU in 2014. We fought for equal pay for equal work and ensured no worker would enter a sewer again. We forced the administration to shut down that practice. This is the power of our collective struggle. We get paid Rs 13,500 every month and have ESI and PF accounts. We fought for it at great personal expense. Our colleagues have lost their lives, many lost their jobs,” Urmila Chauhan, leader of JNU sanitation workers, tells The Wire.

Frustration against the government

Workers have accused the Modi government of turning the SBA into a mere photo-op. “Modi’s Swachh Bharat Jumla and the Plight of Sanitation Workers”, read the banner on the stage as one speaker after another bitterly criticised the government for reducing the SBA into a publicity stunt. 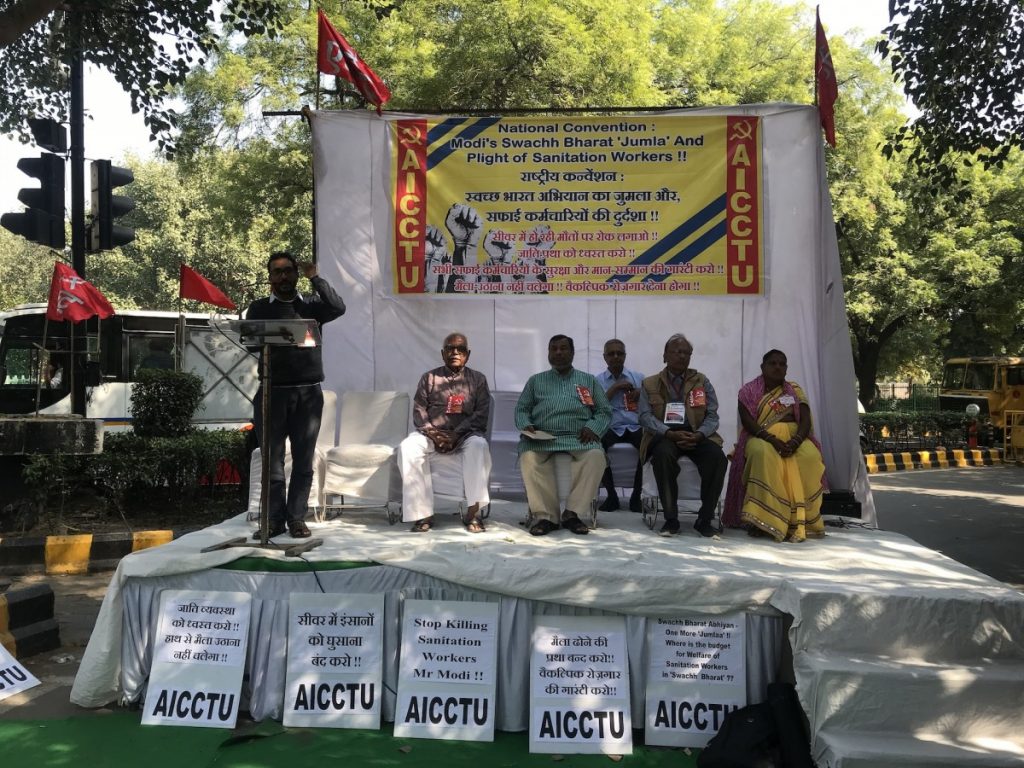 “Modi keeps invoking Ambedkar but has reduced him just to statues and hoardings. More than 90% of sanitation workers are Dalits – none of them should have to work under exploitative contracts,” Bhat says. He accused the government of prevaricating around the issues of lack of funds for workers’ welfare while splurging on statues and bullet trains. Labelling frontline workers ‘health defenders’ – much like soldiers on the border, he said that they have been defending the country against disease.

Clifton D’Rozario, lawyer-activist and state secretary of the CPI (Marxist-Leninist), accuses Modi of being insensitive to the plight of sanitation workers. “On November 10, two workers died in a manhole in Varanasi,” he said. “Modi inaugurated two sewage infrastructure projects at the same location two days later. He didn’t even mention their deaths”.

#Grit is a new initiative of The Wire dedicated to the coverage of manual scavenging and sanitation and their linkages with caste, gender, policy and apathy.