'This Is Just the Beginning,' Say Protestors After Bringing a Sea of Red to Delhi

More than one lakh farmers and workers from across the country marched to Parliament Street in Delhi on September 5, against the government's alleged apathy.

Workers and farmers at the rally. Credit: The Wire/Moniza Hafizee

New Delhi: On September 5, more than one lakh workers and peasant marched from the Ramlila Maidan to Parliament Street in New Delhi, protesting against what they called the apathy of the government in addressing issues faced by them. The protestors, brought together by affiliates of the Communist Party of India (Marxist) – the All India Agricultural Workers Union (AIAWU), the Centre of Indian Trade Unions (CITU) and the All India Kisan Sabha (AIKS) – had travelled from 23 states across the country.

The peasants’ and workers’ march brought large parts of Delhi to a grinding halt. The Delhi traffic police had issued an advisory suggesting that people avoid certain areas of central Delhi through which the protestors were supposed to march. In its advisory, the police mentioned that the march is expected to involve between 20,000 and 25,000 people. However, in reality, the number was at least six times more and the arrangements made by the police to manage traffic went for a toss.

Over the last few years, India has seen several protests by farmers across the country. The intensity and frequency of these protests has increased since June last year, when six protesting farmers were shot dead by the Madhya Pradesh police in Mandsaur. Since then, several coalitions of farmers’ organisations from different states have come together to provide cohesion to the movement. Now, with the Kisan Mazdoor Sangharsh rally in the capital, workers and farmers have come together in a movement at the national level for the first time in recent years.

“The issue of wage is a unifying factor for peasants and workers. Peasants do not get the minimum support price and workers do not get minimum wages. They are the two most marginalised classes. So it is only natural for them to come together,” said Vijoo Krishnan, joint secretary of the AIKS and one of the main organisers of the protest. 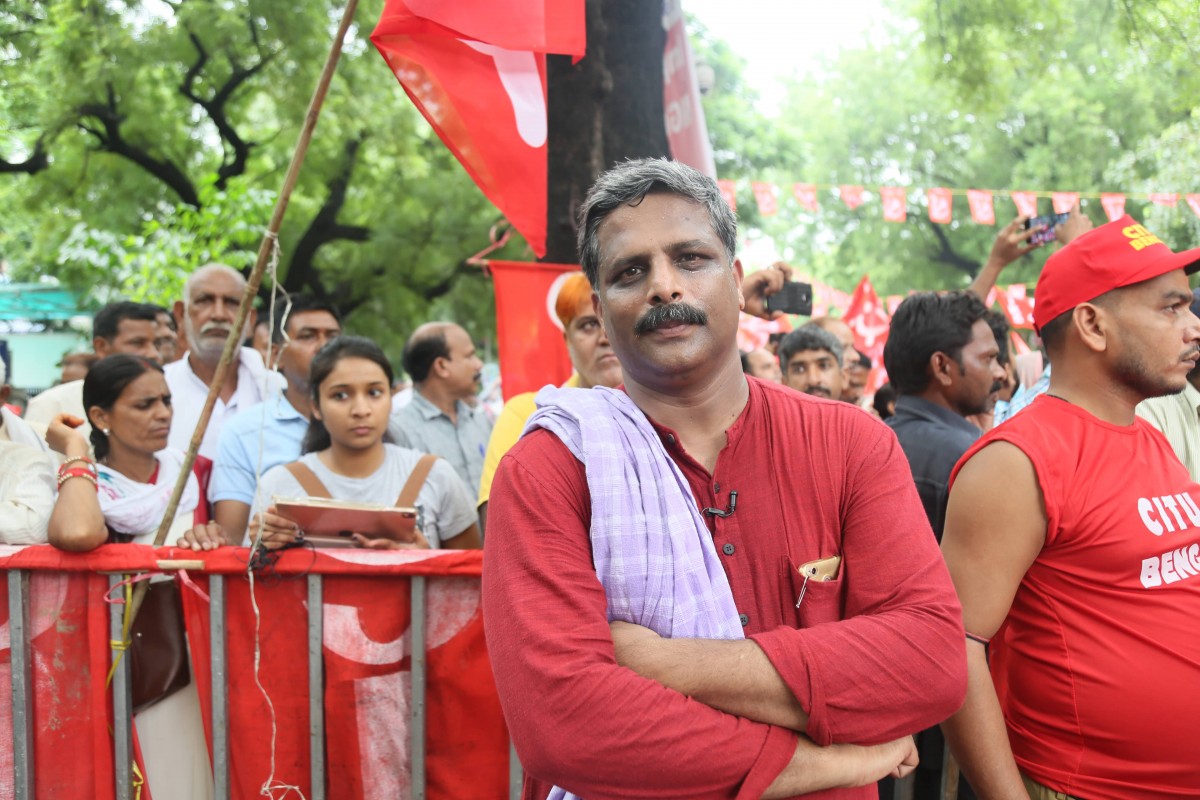 A key demand across all farmers’ movements for the last few years has been the provision of remunerative prices for their produce. Tangibly, the demand is that the minimum support prices (MSP) be set at comprehensive cost of production plus 50%, as recommended by the Swaminathan Commission on farmers in 2006.

In July this year, the Narendra Modi-led government announced the MSP for the kharif crops and claimed that it had implemented the recommendations of the Swaminathan Commission and provided MSP at cost plus 50%. However, as The Wire had pointed out at the time, the government’s claim was misleading. It had chosen a cost of production lower than the one recommended by the Swaminathan Commission and falsely claimed – and continues to claim – that it has implemented the Swaminathan recommendations and fulfilled its election promises.

Suraj Singh, from Uttar Pradesh, pointed out that while campaigning for the 2014 Lok Sabha elections and the 2017 Uttar Pradesh Vidhan Sabha elections, the Bharatiya Janata Party had promised that MSP will be set at cost plus 50%. “What happened to the promise? Modi’s only intention is to fool the farmers. Now, he is claiming that we are already getting cost plus 50%. If so, where is it?” he asked, pointing at his pockets to stress his point. A group of Accredited Social Health Activist (ASHA) workers had come from Etawah to demand higher wages. “We have to work round the clock. We can be called to do our duty at any time. And we get paid very little. It is nowhere close to enough to provide for our families,” said Kamla Devi. “We demand that our wages be increased to a minimum of Rs 18,000 per month.”

In photos: Farmers and Workers Who Have Travelled Across the Country to Make Their Voices Heard

Another group of women who are mid-day meal cooks had travelled from Tamil Nadu. They too complained about low wages. “We get paid Rs 1,000 per month. It is less than the minimum wage. And we only get paid for ten months in a year,” said S.  Janadey.

J. Daisy, also a mid-day meal cook from Tamil Nadu, said that as salaries in all vocations increased, their salary too should be periodically revised. “I am not only talking about mid-day meal cooks, but also anganwadi workers, ASHA workers, all workers. The minimum wage should be Rs 18,000 per month. And there should also be a pension,” she said. 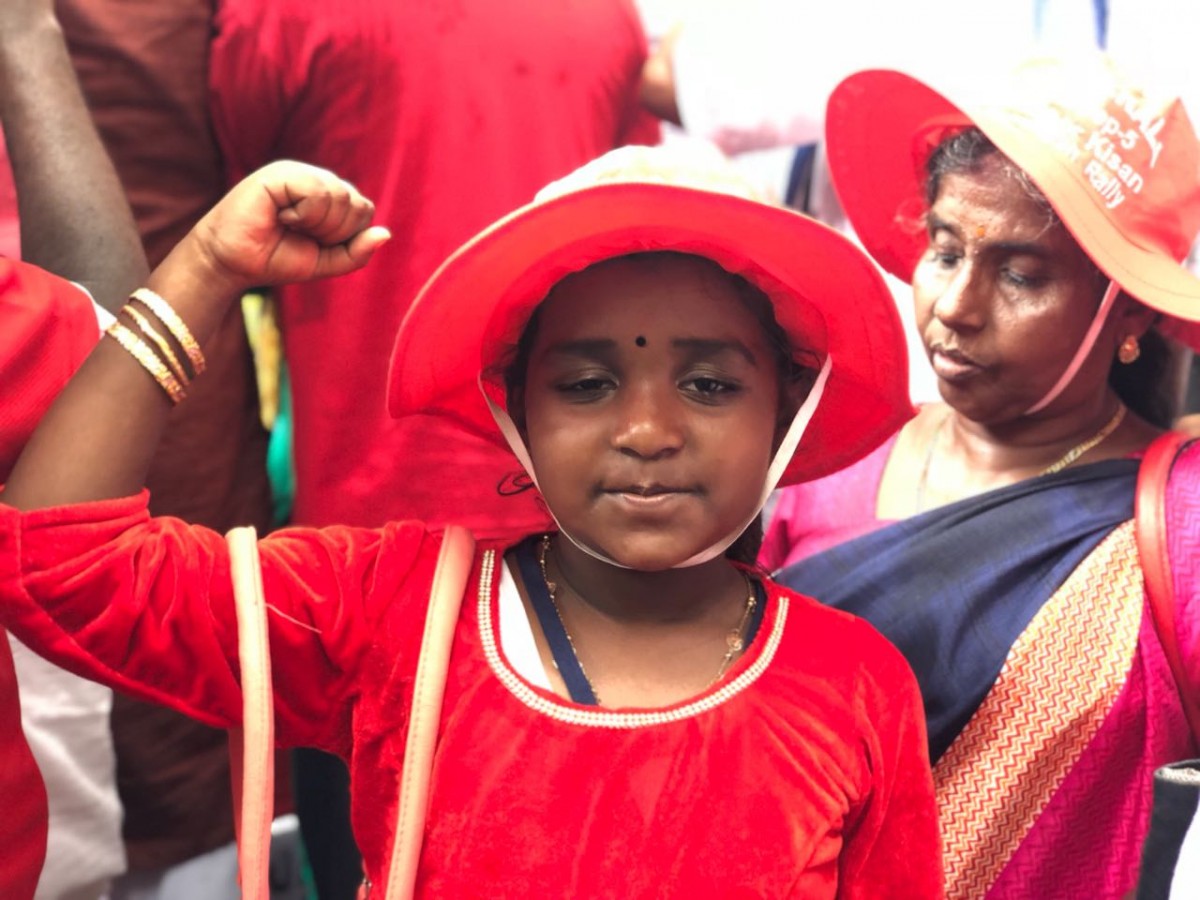 Not all those who had travelled to Delhi to be a part of the protest were affiliated to the CPI(M) or were particularly enamoured by its politics. “I have never voted for the Left parties and have never been a supporter. And to be honest, I have disliked their policies. But today, no political party is willing to hear the voices of farmers. Workers of the CPI(M) have made the effort to reach out to us and have also made us feel a sense of ownership about this movement. That this is our movement,” said Ravinder Hooda, who had travelled from Saharanpur.

According to the organisers, the September 5 rally in Delhi is only a precursor to protests that the country will see in the coming days. “This is just the beginning. In the coming days there will be much bigger struggles. We have all seen the long march from Nasik to Mumbai in March. Now, at the end of November we are going to have a long march of the dispossessed from four corners of Delhi to the parliament. And in December, there will be an unprecedented general strike called by the workers, farmers and agricultural labourers,” said Vijoo Krishnan.