Factory Workers Can Now Legally Be Asked to Work 12-Hour Shifts. How Will this Change Things?

Four states are allowing a 72-hour work-week due to the COVID-19 pandemic, a move that comes with serious implications for India's factory workforce. 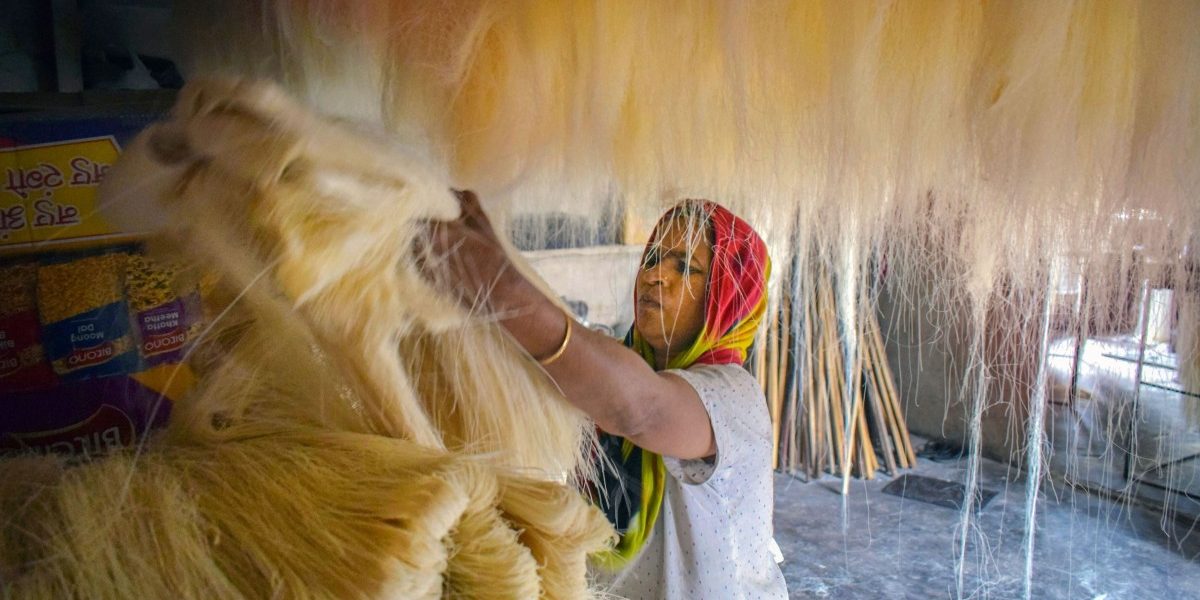 A factory worker making vermicelli during the lockdown in Allahabad. Photo: PTI

On April 15, the Ministry of Home Affairs issued a detailed notification outlining the conditions under which economic activities could be restarted in non-containment zones.

The order imposed a string of mandatory do’s and don’ts such as social distancing, the arrangement of private transportation for workers and medical insurance. The violation of any of these directives, the order noted, could attract severe penalties including imprisonment under the National Disaster Management Act, 2005 (NDMA).

Two days before that, on April 13, India’s central trade unions (CTUs) sent a letter to the Union labour minister that expressed their opposition to a proposal that would amend the Factories Act, 1948 (FA), a move which was reportedly being considered by the Centre.

This move is controversial, because 48 hours per week is what is mandated by global and ILO norms. In fact, the first convention that ILO adopted was the Hours of Work (Industry) Convention, 1919 (No. 1) which India ratified in 1921 and it proclaimed 48 hours of work in a week.

While the Centre hasn’t yet amended the FA, at least four state governments – Rajasthan (April 11), Gujarat (April 17), Punjab (April 20) and Himachal Pradesh (April 21) – have issued notifications in the last few days to increase the working hours as mentioned above.

Incidentally, this has become the most popular strategy of carrying out labour law reforms in India both historically and recently.

Labour market reforms at the national level are often opposed stridently by a rather united trade union movement through massive strikes involving crores of workers and in the tripartite forum also. These are supported, on-and-off, by opportunistic opposition political parties. Reforms such as easy ‘hire-and-fire’ rules create negative outcomes like unemployment, which have adverse electoral costs for ruling parties. This is why core labour law reforms at the national level then becomes problematic for the Centre. What, then, becomes the way out for the Union government? Since the subject of ‘labour’ figures in the Concurrent List, the Central government allows willing state governments to adopt these reforms and the president’s assent, which is in essence a Union Cabinet decision, is granted for them.

Thus, the Contract Labour (Regulation and Abolition Act, 1970 was liberalised by the then ‘united’ Andhra Pradesh in 2003, by Maharashtra in 2017 and by Rajasthan in 2014. Chapter V-B was also liberalised by the Rajasthan government to make it applicable to industrial establishments employing 300 workers in place of 100 in 2014, following which others like Jharkhand did it in in 2016.

A similar strategy has been adopted here with respect to increasing the hours of work during the COVID-19 context.

But there are a few issues with these notifications. Firstly, the legal justifications given for pushing through a 12-hour shift come with their own defects. Section 51 of Factories Act, 1948 (FA) stipulates that no adult worker should work for more than 48 hours in a week and within this framework no worker should be allowed for more than nine hours a day (S.54). In addition to this, the total spread-over time inclusive of rests should not be more than 10.5 hours a day (S.56) and subject to S.51 and S.54, more hours worked will be paid at the rate twice the ordinary wage rate (S.59).

The reasons given by these governments for extending working hours include “labour shortage” due to curfews because of the pandemic, specifically trying to reduce manpower requirement “by 33%” and limiting worker movement (Rajasthan) and “for safety and social-distancing” (Gujarat). In the meanwhile, several industry leaders have been complaining of “labour shortages”. Himachal Pradesh has not mentioned any reason for the extension in its notification.

Also read: The Streets Are Empty. How Are Hawkers Surviving This Lockdown?

While all of them have increased the maximum working hours to 12 hours a day and 72 hours a week, Rajasthan and Punjab have provided for overtime (OT) pay – Punjab’s notification specifically mentions that OT pay will be double the normal wage rate as per Section 59 of FA.

Gujarat’s notification however says, “wages shall be in proportion of the existing wages”. This means, as the notification points out, that if wages for eight hours are Rs 80, then the proportionate wages for 12 hours will be Rs 120.  Thus, the OT wages provided for by Gujarat is less than what is stipulated by S.59 of FA and to that extent it is legally deficient.

While Gujarat and Himachal Pradesh governments have exercised the powers conferred by S.5 and the Punjab government S.65 of FA, Rajasthan did not specify any provision at all. The exercise of S.5 by Gujarat is also questionable as it empowers the state governments on the grounds of “public emergency” to exempt factories from all or any of the provisions of FA save S.67 (which deals with prohibition of employment of children).

“Public emergency” means “a grave emergency whereby the security of India or any part of the territory thereof is threatened, whether by war or external aggression or internal disturbances” (introduced with effect from 26/10-1976).  The crisis due to COVID-19 is for biological health hazards and surely is not covered by the definition of public emergency under S.5 of FA even under “internal disturbances” grounds which must affect security of India.

Shortage of labour and social distancing principles legitimise the extension of working hours as it optimises the deployment of existing workforce and thus partly tackles the extra costs involved in complying with the MHA’s order.

But is the extension of working hours needed for all industries? Why aren’t the existing provisions in the FA adequate to be used to tackle contingencies mentioned above?

After all, where necessary, employers and unions (wherever they exist) could together determine the labour shortage, extra workload and accordingly calculate the over-time that would be required. The issues arising out of labour deployment will differ across industries and cannot be generalised for the manufacturing sector as a whole, which is what these amendments assume.

What is important to remember is that a 12-hour shift effectively reduces the demand for labour. In the absence of company-worker dialogue, employers may unilaterally take calls, and hence provide room for discrimination regarding employee choices and income distribution among workers. These issues may lead to labour unrest. To be sure, social dialogue could mitigate any adverse effects of a 12-hour shift.

Beyond this, there are several practical issues that affect factory workers. Increased hours of work, especially when the tasks are repetitive and mechanical, will raise fatigue and work stress, hence affecting productivity adversely.  In cases where workers thanks to social distancing are performing multiple though related tasks, the possibilities of work-related stress will be much higher. It is also plausible that errors could occur, with even accidents at the workplace cannot be ruled out.

The most serious setback arising out of a 12-hour workday, though, is that it will place women workers at a disadvantage thanks to their multiple roles in the workplace and homes, and women’s employment might be reduced. Women workers are more unlikely to prefer employment which requires them to stay at the workplace, and 12 hours plus travel time will mean less time for family life. Hence, they are least likely to self-select and their economic capacities will be affected.

All these have adverse gender implications. Even for male employees, being away for 12 hours plus travel time in case of travel-based work, scheduling their work-life balance will be affected. Alternatively, in cases of shelter-based work scheduling, their absence from home at a stretch might affect their emotional state, assuming that they will be provided home-like shelter and food.

Also, these notifications will greatly reduce the employment opportunities of ‘precarious’ workers as when there is a likelihood of non-employment of some regular workers, the question of precarious workers does not arise. However, given the labour flexibility drive of employers, it may be that some cost-optimising employers may prefer these precarious workers.

Taking one step back though, the COVID-19 pandemic and economic slowdown has thrown up a wide range of questions that have grave implications for India’s blue-collar factory workforce.

For instance, what if non-employed workers do not get full wages even if they are ready to offer their services or should they be paid lay-off compensation? Is a pandemic a legally valid clause for lay-offs? Even assuming that lay-offs are legally allowed, as per Chapter V-A of the Industrial Disputes Act, 1947 workers employed in factories employing 50 or more workers only are eligible for it. One may argue that factories employing less than 50 workers may not start production at all, as some reports indicate.

But as a legal principle, how will the non-employed workers be compensated, whether for eight hours or 12 hours of work? All these could be left to social dialogue at the firm level. Issuance of legally defective and macro-based notifications are ill-advised and should be withdrawn. In these sensitive circumstances, talk of labour law reforms in terms of introduction of labour codes will be injudicious and even counter-productive.

The first socio-economic task is to balance lives and livelihoods. There are better state interventions to consider, like wage subsidies.

The vexatious question is: Why is there not greater engagement with trade unions at this troubling time? This might help with governance of the world of work and the crises brewing in it.

K.R. Shyam Sundar is Professor, XLRI, Xavier School of Management, Jamshedpur. He can be contacted at krshyams@xlri.ac.in